A '90s culture icon takes over the big hit show of the Bush era. And the results are as grisly as any crime lab. 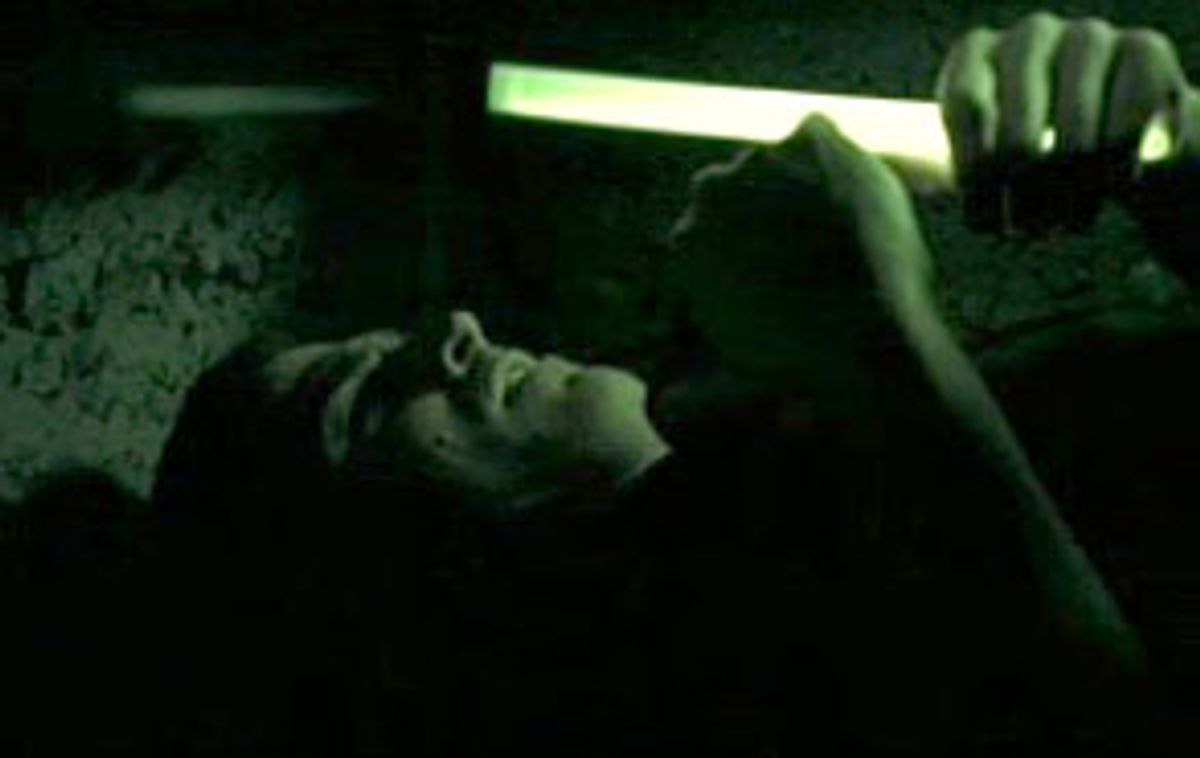 A pile of human guts on a Las Vegas street, with the MGM Grand logo visible in the background. No, sorry, those are just dog guts! Clues: an unfiltered cigarette butt, a Styrofoam cup in a Ziploc bag. A guy buried alive and beset by fire ants. Some shtick about Roy Rogers' horse. Two doofuses playing the "Dukes of Hazzard" board game. A passed-out stoner in a T-shirt honoring Italian horror-movie legend Lucio Fulci. An autopsy scene played for gruesome laughs. If Quentin Tarantino's season-ending episode of "CSI" wasn't everything it might have been, it wasn't because any of the pieces were missing.

Except for that twisted-brilliant shot of the planted entrails (which turn out to be a prelude to crime, not evidence of one), this bulked-up two-hour episode couldn't often manage to seem like both Tarantino and "CSI" at the same time. Mostly it was one or the other by turns, and the result was a herky-jerky affair, always watchable but never totally convincing.

The first hour of "Grave Danger" (ha, ha) possesses a dank, claustrophobic energy, as CSI team member Nick Stokes (George Eads) is abducted by an unknown assailant for unknown reasons and his fellow sleuths mope around the lab, trying to raise the ransom money or hunt the psycho or both. Out of nowhere come weird little cameos from Tony Curtis and Frank Gorshin as aging Vegas hustlers -- I couldn't help feeling that Tarantino wished the show were actually about them, instead of all those boring cops. But the "mystery" behind Stokes' disappearance is revealed oddly early, and as the episode limps to an end it feels sordid and more than a little sad.

On one level -- on most levels, actually -- Tarantino and prime-time's highest-rated dramatic series seemed like a poor match. The director's strengths lie mainly in black humor and eccentric characterization, while the "CSI" franchise is resolutely unfunny and its running cast of characters can only politely be called archetypes. Fragments or vestiges is more like it; cardboard cut-outs would also work. Watching stony CSI team leader Grissom (William Petersen) trying to engage in trademark Tarantino banter about his childhood relationship with Trigger -- that would be Rogers' trusty steed -- is almost physically painful.

Furthermore, Tarantino isn't much of a plot architect (although I'm sure he'd beg to differ). Instead, he's a pack rat who snitches bits of story from here and there and makes them stick together with a distinctive aesthetic. Whether you like him or not, his movies breathe, while the "CSI" shows are essentially finely tuned machines. They depend on whiz-bang reenactments and animations, and on plots that switch back once, twice and sometimes three times before dropping you back at your front door, 59 minutes past the hour.

There are deeper incompatibilities, too. "CSI" is the big television hit of the George W. Bush era, and the message it delivers over and over is, appropriately, a simple one: Step outside the boundaries of conventional family life -- into bisexuality, cross-dressing, Ecstasy raves, Goth rituals, or just some extramarital whoopee -- and you're likely to wind up exsanguinated on someone else's bathroom floor, with pantyhose in your mouth. Tarantino is a culture icon of the '90s if there ever was one, and it's safe to say that his moral code, to the extent he has one that isn't quoted from Sam Peckinpah, flows through a more lubricious valley.

Still, there was something to this combination -- something like getting sick-drunk on tequila and then rolling down a hillside of poison ivy, maybe. Tarantino grasped one important fact about "CSI" that is a perfect fit for him: It's a sick puppy of a TV show, probably the most sadistic thing on the air that doesn't feature midriff-wearing bimbos with spray-on tans competing with each other. In inflicting terrible torments on one of the CSI cops, and perhaps the least likely one at that, he tries to turn the series' cruelty on its head. Eads, a jarhead-jock type who normally displays the emotional range of a refrigerator, infuses Stokes' terrible plight with a wrenching humanity that's almost entirely new to this show.

Although Eads is terrific, this is one of Petersen's most boring episodes, and the sexy-tough CSI chicks, Marg Helgenberger and Jorja Fox, get almost nothing to do. As Stokes' best pal Brown, Gary Dourdan quivers his lip and tears up a little, to express the manly-but-not-quite-homoerotic love he feels for his bud, whom he watches (via villainous Internet feed) writhe in a Plexiglas coffin getting munched by fire ants.

Rather than driving for heightened character realism, Tarantino seems to push "CSI" toward becoming more a gallery of grotesques than it is already. The hunt for Stokes' abductor leads to a gloomy little female prisoner (Aimee Graham) who tells the investigators she's a lesbian sex slave -- personally, I think the gals in jail could do better -- and then to a guy who blows himself up with a Semtex bomb for no discernible reason.

Stokes' torments include the aforementioned ants -- seen of course in loving close-up -- and a near-death fantasy about being autopsied alive, which is simultaneously the funniest and most gruesome moment in the whole two hours. If you've got the show Tivo'd, just watch the first half-hour (up through the cadaverous Tony Curtis) and then skip right to the autopsy. In between these high points, Quentin's little "CSI" experiment is morbid as cold molasses, sometimes fascinating but hardly any fun.