In a fantastical finale, Ryan gets back in touch with his inner thug. Is it enough to save "The O.C."? 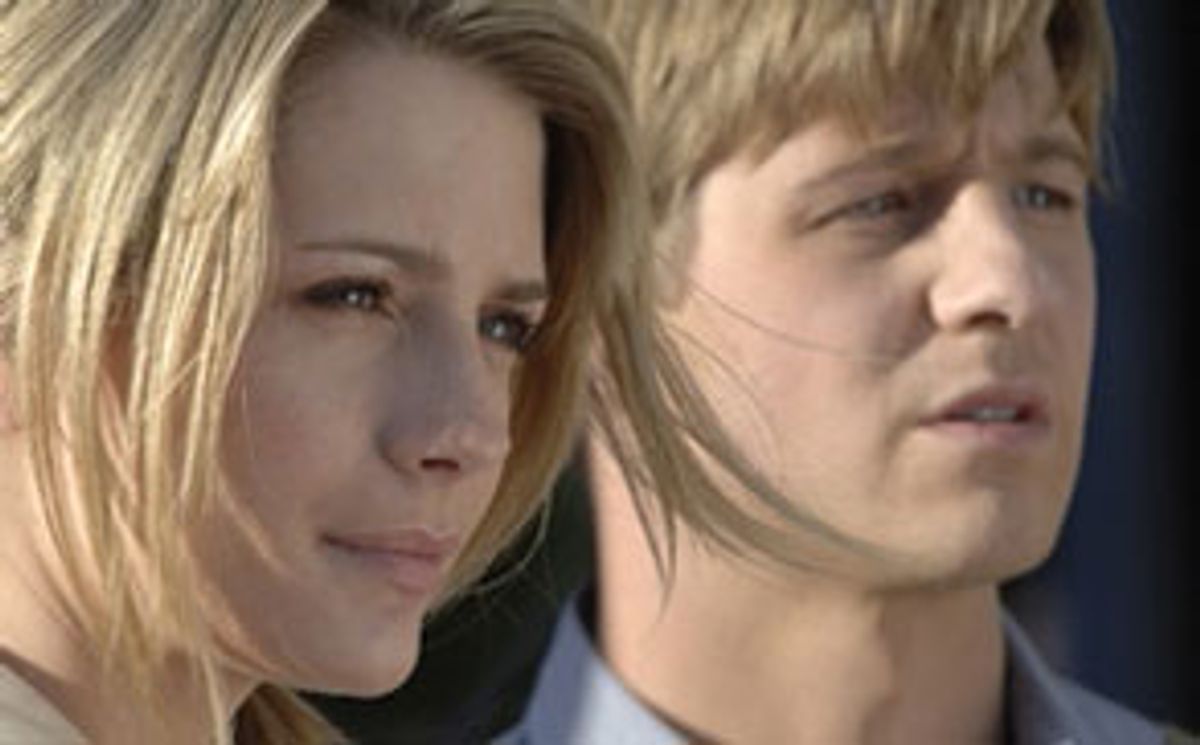 Last week, after a colleague caught a few minutes of "The O.C.," she was compelled to ask me a simple, yet poignant, question: "Do you watch 'The O.C.' because you think it's really good? Or are you just addicted?" It was clear from her tone of voice that her opinion of Fox's Thursday night teen drama, based on only a few minutes of viewing, was not high. I fumbled, uttering something about how good the first season was, about how the tawdry soapiness she'd glimpsed wasn't what the show was about. In other words, I dodged the question. I had once loved "The O.C." so much that I felt I had to cover for it -- sort of like when a friend points out what an asshole your ex was, you feel compelled to make excuses for him, even though you know it's the truth. The real answer was just too sad to admit: At that point, I was only watching "The O.C." because I had promised to write about the season finale.

I was addicted, to use my colleague's word, to the first season of "The O.C." I watched it in sequence on DVD, and actually woke up early in the morning more than once to sneak in an episode before work. A teen show without a taste of the supernatural (i.e., an awesome lead character who slayed demons) hadn't worked such a spell on me since the first season of "Dawson's Creek." The premise is simple: The wealthy, perfect Cohen family of Orange County -- coolish dad Sandy (Peter Gallagher), waspy mom Kirsten (Kelly Rowan) and their adorably awkward son Seth (Adam Brody) -- have their world rocked when dad comes home one day from his work as a public defender with a surprise in the form of -- a new son! Ryan Atwood (Ben McKenzie), a troubled kid from the wrong side of the tracks and one of Sandy's clients, provides a missing piece for each member of the Cohen clan: a second (and blond!) child Kirsten never had, a chance for Sandy to do good in the most hands-on way, and, most important, the super-cool older brother Seth always wished for.

Ryan's bumpy adjustment to life in the O.C. provided a solid central narrative for most of the first season to revolve around and stretch out from. His anger, a full flame kindled by a rotten childhood, fueled the show. Had anyone in Orange County ever wanted to kick so much ass? A mere cross-eyed look at Ryan would mean a fight -- with punches and grunts and swift kicks. He fought for Seth, for his girlfriend, Marissa (the pretty but tragically bad Mischa Barton), or just for the hell of it. He seethed, he brooded, he sulked in his black hoodie. Ryan was a character of few words, but he possessed an interior life we believed was deep, dark and, needless to say, attractive. He was "The O.C.'s" James Dean, with muscles and tank tops and, instead of a motorcycle, keys to the Cohen's SUV.

Seth was, and remains, the show's brightest star; he's the boy whose quirky intellect, terrific wit, swell taste in music, Le Tigre shirts and mensch-ness make him an oddity in the O.C., but a dreamboat to all us girls of Brooklyn. (Plus, those curls! Those cheekbones!) But Ryan, he makes "The O.C. " Without him, the show would be merely a slightly torqued "90210," focused on the trials of poor little rich girls and the geeky boy who loves them. That's why it was so awful to watch Ryan this season. He was emasculated -- not by Marissa, but by the writers. He got nice. His flame blew out. He dated a pretty, normal girl, did his homework and didn't run off to Chino to steal cars. During the finale, just as he's about to go beat the hell out of his brother (more on that in a minute) he says to Seth, "All year I've tried to be a different person. I can't do that anymore."

At that moment, I thought: So that's what happened? It turns out that being a different person -- in this case a good, perhaps less erratic person -- also means being really boring. The one thrilling moment last night came just before Ryan uttered that line to Seth: He really looked mad. Like he was coming back to life. Like, maybe, he'd been waiting for the chance to return to his natural state for the last 23 episodes, but something had been keeping him down. It looked like he was thinking: This is my moment for revenge -- not on my brother, but on "The O.C. "

And some revenge it turned out to be! But let me back up for a minute; this is, after all, supposed to be a report on the finale. Aside from the sidebar that Marissa's sweet, but oft-misguided dad Jimmy (Tate Donovan) appears to be returning next season to reunite (surely temporarily) with his ex-wife Julie (played by the fantastic Melinda Clarke), there were two main story lines to follow: one involving Seth's parents, who got a lot of airtime for troubles of their own these last few months, and the other involving Ryan and his no-good ex-con brother, Trey (Logan Marshall-Green).

Let's get Kirsten out of the way first. Basically, she's an alcoholic. In episodes previous, she'd gotten tipsy from "her Chardonnay," but for the last few weeks she'd been hitting the hard stuff, hardcore. One night she was drinking and driving and was in a car accident with a semi; a few short weeks later she was wandering through her father's funeral reception with an entire bottle of vodka in her hand. ("Jesus," Sandy said. "Couldn't you at least use a glass?") All of this led her husband to stage an intervention and have her committed to a detox farm somewhere, no doubt, in California wine country. All we really know is that the place is beautiful, and the sheets have a very high thread count.

With the teenagers, things were far more dramatic. Marissa finally confessed to her best friend Summer (the ever-shrinking Rachel Bilson) that Trey had attacked her a few weeks before when Ryan (who is currently her boyfriend, again) and Seth (who dates Summer) were in Florida visiting Seth's grandma. Summer told Seth, who told Ryan, who brooded, and then broiled. His parting words to Seth were, "Trey and I are going to settle this once and for all." And then he was out the door.

The attack in question was an awful almost-rape that left Marissa with a tremendously bruised upper-chest and a terrible fear of intimacy. Ryan had every right to be angry; this was one instance where a foe really, really deserved the beating he was about to receive. Of course, Ryan's revenge couldn't play out as planned. Through a network of speed dials, Marissa was dispatched to the scene as Summer and Seth made their way there. When Marissa walked in the door, she saw that Trey had the upper hand in the fight, and that Ryan was going to die (Trey was choking him) if she didn't do something. What's a 98-pounder to do? She yelled a little and then, fortunately, noticed the gun lying on the floor, left over from a drug deal Trey had done earlier in the day. Of course! Marissa picked it up and shot Trey through the back, just as the rest of the gang walked through the door to Trey's apartment. End of season. Cue up the indie rock.

Trey was truly a piece of shit, but as a character, I had to feel a little sorry for him. He had a lot on his shoulders, even before he took a bullet through them. During the first season, he'd been nothing more than an auto thief, doing time in Chino for stealing a few cars. Upon his release -- and once he'd been swept up into the wide, waiting arms of the Cohens -- he also became a drug dealer, a rapist, and a man so violent he would kill his own brother. None of this fits together; the writers needed a bad guy, so they put everything on him. Poor Trey was little more than a plot device! (He wasn't alone: Earlier this season, in perhaps the most unbelievable pairing ever, Olivia Wilde played a lesbian named Alex who had a short relationship with Marissa. Marissa -- a very straight, inexperienced young woman suddenly turned Sapphic goddess. Right. OK. Poor Alex; worse than a plot device, she was a ratings booster, promising lesbian action with the Keds spokesmodel.)

In "The O.C.'s" first season, even when plotlines were contrived -- how do these 17-year-olds get into nightclubs, anyway? -- they were at least spawned from the real messiness of life: the anxiety of adolescence, the thrill of young love, the insecurity of even the prettiest and most popular. The only big soap opera moment came at the end of the season when Ryan's ex-girlfriend from Chino, whom he'd briefly reconciled with during a break from Marissa, discovered she was pregnant. But that cheesy, lazy twist pales in comparison to what happened last night and many others on this season of "The O.C. "

Sadly, the way the second season wrapped, it seems like we might be in for more of the same. Will Marissa go on trial? More important, will Mischa Barton, who up to this point has only really expressed coyness and upset, have to learn how to act so that she can express something like guilt? It's true, and good, that Ryan has his vital anger back. But it's going to take a lot more than that to save "The O.C. "