How I learned to stop worrying and love the nuclear option. 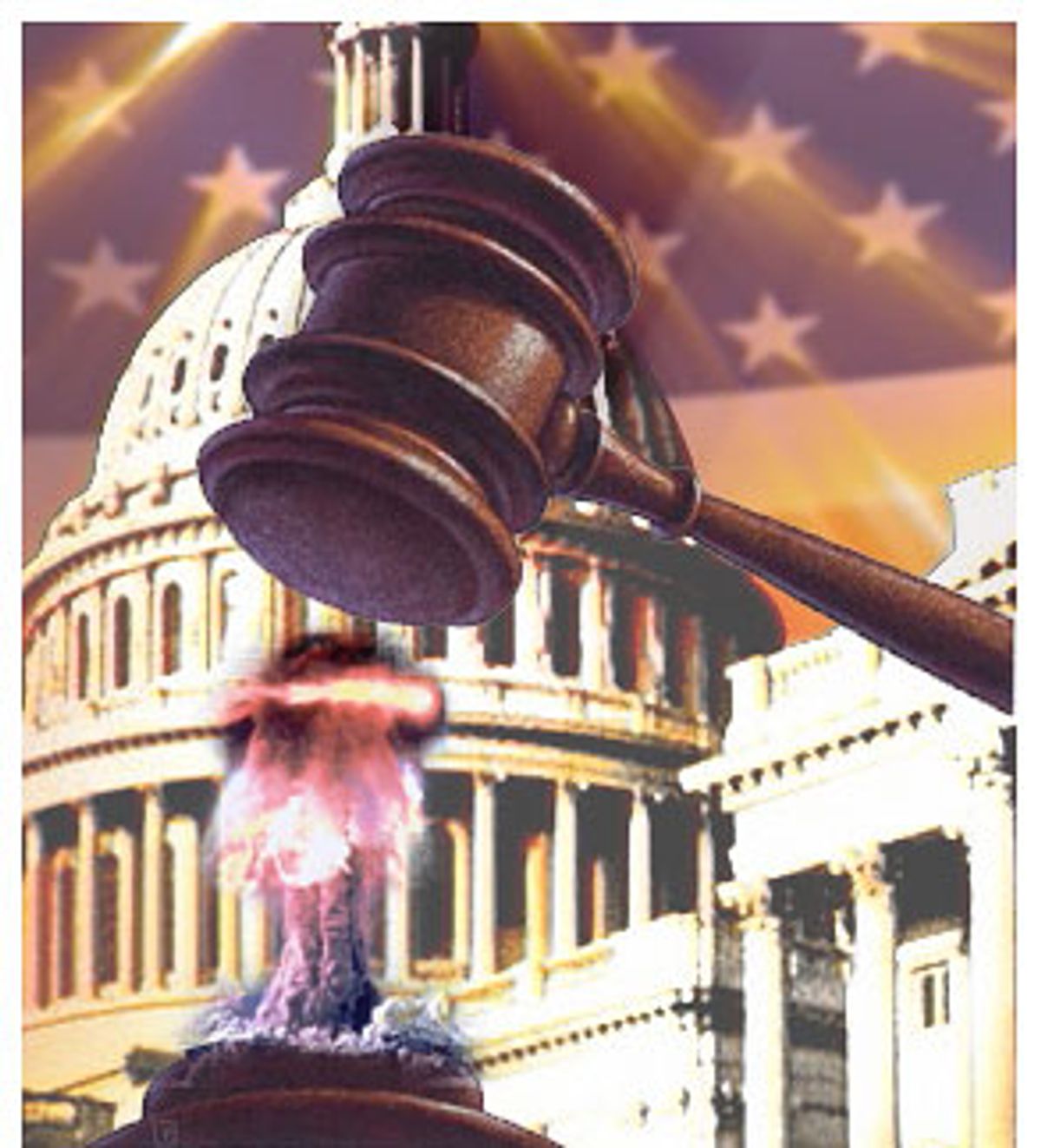 Let's start by acknowledging the obvious: The nuclear option is unprincipled. There's nothing commendable about the Republicans' attempt to steamroll the slightest opposition to their authority, and you can't have much respect for a team that wants to illegally change the rules in the middle of the game.

Now that we have that out of the way, here's an idea to consider: Republicans may not be wrong to want to eliminate the filibuster, and Democrats have nothing to lose by letting the GOP win this one. The filibuster is, after all, one of the more anti-democratic parliamentary maneuvers in the federal government's most undemocratic body, the Senate. A tactic not envisioned by the founders, and most famously used by Southern racists to frustrate the passage of civil rights legislation, the filibuster doesn't exactly have a savory tradition.

More than that, the filibuster is no friend to Democrats, whose policies, if not politicians, appeal to a majority of the American public. They may be in the minority now, but Democrats can win again. They can take the Senate and they can take the White House, possibly both, possibly soon. When that day comes, you can be sure Republicans will use the filibuster in the same way that Democrats are using it today. Wouldn't it make sense to take that option away from the GOP now, when they're agitating for the change -- and then, in the future, to hoist them with their own petard?

The problem with the filibuster stems from the problem with the Senate, which gives every state two representatives, regardless of population. In the Senate, the two Republican members from the nation's smallest state -- Wyoming, with a population of less than 500,000 -- often cancel out the wishes of the two Democratic senators from the nation's largest state, California, with almost 34 million people, 68 times the number in Wyoming. The filibuster, which allows any member to keep debating an issue unless there are 60 members willing to stop him, exacerbates the undemocratic nature of the Senate. If everything in the Senate must meet with the approval of at least 40 senators in order to receive the blessing of the body, technically a very small minority of Americans can obstruct the will of the majority. The 40 senators from the 20 least populous states represent only 29 million people. In other words, the filibuster gives a tenth of the nation's population the power to veto the will of the other 90 percent.

Speaking on the floor of the Senate in the past couple of days, Democrats have argued that this is the way it was meant to be. The founders, who wanted to prevent a popular majority from tyrannizing a minority, thought of the Senate as a body that would cool the passions of the population, Democrats say. That may be so, but it's not true that the founders wanted to give small numbers of senators the right to frustrate the rest of the body through endless debate. "The very fact that the filibuster exists is a historical accident," says Frances Lee, a political scientist at the University of Maryland and a coauthor of "Sizing Up the Senate: The Unequal Consequences of Equal State Representation." The filibuster was created in 1806 when the Senate changed its rules and failed, more or less by accident, to include a provision to limit debate; Rule 22, which required two-thirds of the Senate to agree to limit any debate, was adopted more than a hundred years later, in 1917. In 1975 the number of senators required to invoke "cloture" on debate was reduced to three-fifths of the Senate, or 60 votes.

Which party does the filibuster benefit? Support for a particular parliamentary rule depends, Lee notes, on whose ox is being gored. At the moment the filibuster is a tool for liberals, who've used it to block President Bush's judicial nominees. In the past, it's been used effectively by conservatives. Strom Thurmond spoke for a record 24 hours and 18 minutes against the Civil Rights Act of 1957. FactCheck.org notes that the last senator to filibuster the Civil Rights Act of 1964 was Democrat Robert Byrd of West Virginia, "who spoke for 14 hours and 13 minutes, finishing the morning of June 10 -- the 57th day of debate on the measure."

There is an argument to be made, however, that over the long term, the filibuster might be more a hindrance than a help to Democrats, and that therefore it might be in their interest to get rid of the judicial filibuster now -- and to welcome any further weakening on legislative filibusters that the move may prompt. One way to look at this question is philosophically. The filibuster, writes the American Enterprise Institute's Norman Ornstein, is a conservative tool -- "it delays government action in order to overcome intense minority opposition and to build broader popular support." Liberalism is an activist pursuit; to get things done -- things like passing civil rights reforms -- you need to change the status quo. Conservatism, by contrast, favors the status quo and, therefore, makes better use of the filibuster.

That philosophy may not match today's reality. Frances Lee points out that today it's Republicans who want to get things done -- they want big changes on foreign policy, domestic policy, and judges -- and Democrats who are playing defense. But are Democrats always going to be in the minority and on defense, rather than offense? Slate's Timothy Noah, a longtime liberal objector to the filibuster, has noted that "in grooving on the filibuster, Democrats show that they are unwilling to consider" a future in which they might be back in power again.

You may say there's only a small chance that Democrats will win the Senate in 2006 and the presidency in 2008, and that therefore, they should fight to keep alive what little power they have. Today, there are 44 Democrats in the Senate, and 55 Republicans. (One member, Vermont's Jim Jeffords, is independent.) Indeed Sen. Harry Reid, the Democratic leader, recently said it would take a "miracle" for the Democrats to win a majority in 2006. He may be right. But it's also true that however slim the chances are of Democrats' winning 51 Senate seats, they're a lot better than the possibility of their winning 60 seats. And by fighting for the filibuster now, Democrats are essentially allowing Republicans to veto future Democratic federal judges unless the Democrats meet the 60-vote requirement.

If Democrats were acting in their best long-term interest, they wouldn't want to give 40 Republican senators the right to block their actions -- because Republicans in the Senate generally come from smaller states, and therefore generally represent many fewer people than do Democrats. If you consider that every senator represents half the number of people in his or her state, then the 40 Republican senators from the smallest states represent only 56 million Americans -- 20 percent of the population. The 40 Democratic senators from the least populous states, meanwhile, represent 90 million Americans, or 32 percent of the population. When Democrats insist on filibustering judges today, they may say that they are speaking for at least a third of the nation (and in fact they are likely speaking for a lot more, since all the Democrats in the Senate represent 143 million people, while the Republicans represent 138 million). But by fighting for that right, Democrats are also effectively allowing the 40 Republicans who speak for one-fifth of the nation to one day block a Democratic agenda.

Frances Lee and Bruce Oppenheimer, a Vanderbilt political scientist who was Lee's coauthor on "Sizing Up the Senate," say that if they were to reform the Senate, the filibuster is not the first thing they'd choose to tackle. There's a lot that's wrong with the Senate -- it allows, for example, a committee chair who may represent a fraction of the nation to set the policy agenda -- and fixing those things would be more fruitful first steps. For those reasons and others, neither Lee nor Oppenheimer is a fan of the nuclear option.

Still, it's not every day that one gets a chance to fix the Senate. Senators like the way the body works; they like that every member, however few people he or she represents, gets to have a say, and they're often unwilling to make any changes in that system. Others on the left have recognized that the nuclear option gives Democrats a once-in-a-lifetime chance to rewrite the rules in their long-term favor. Besides Slate's Noah, the L.A. Times has supported the move, as has Jonathan Cohn in the New Republic. It may not be an easy pill to swallow right now -- but imagine having 52 Democratic senators one day, a Democratic president, and the chance to nominate a real liberal to the Supreme Court. And imagine, too, the Republicans not having any power to stop you.

It's a delicious thought.