Riders on the storm

Benjamin Franklin galloped after a tornado in 1755, and tried to tame it with a whip! 250 years later, his descendants continue the chase. 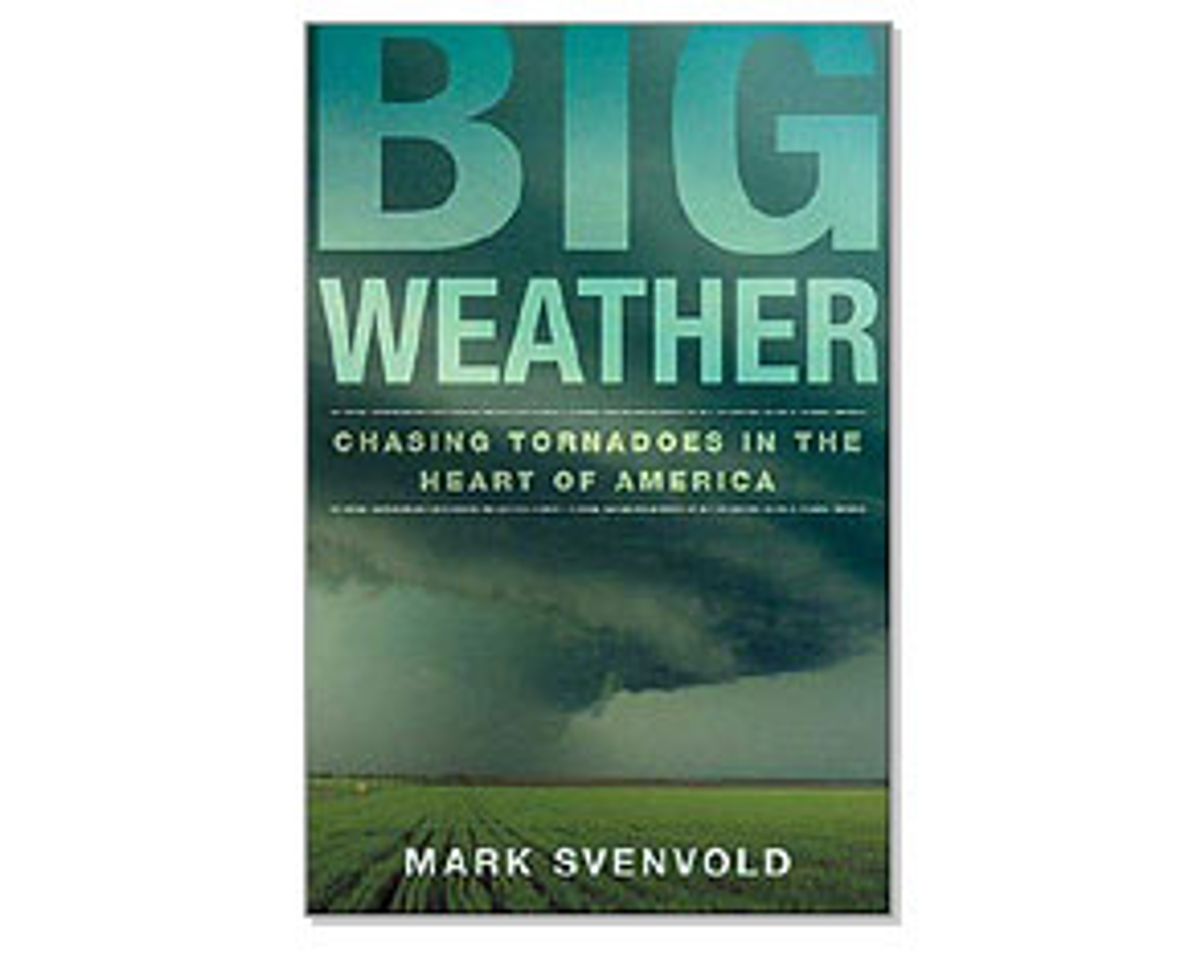 Every child in grade school learns about Benjamin Franklin's famous experiment with electricity -- the kite in the storm story. But fewer know that Franklin was also America's first storm chaser, galloping on horseback after a tornado down a muddy road near Annapolis, Md., in August of 1755. He recounts the episode in a letter that is bracing for both its cinematic value and its sheer audacity. Finding himself alongside the tornado, Franklin brandished his whip and "tried to break this little whirlwind," striking frequently through it again and again. As he followed the twister, he noticed that it raised "the old dry leaves with which the ground was thick covered, and made a great noise with them and the branches of the trees, bending some tall trees round in a circle swiftly." He then saw "the trunks and bodies of large trees inveloped [sic] in the passing whirl." Franklin followed the tornado for nearly a mile until falling tree limbs made him, in a wonderfully understated phrase, "more apprehensive of danger."

Franklin's descendants -- scientist-adventurers like Joshua Wurman of the Center for Severe Weather Research, based in Boulder, Colo. -- are out in force this spring. They're tracking tornadoes, trying to capture them on mobilized Doppler radar in order to better understand why some storms merely bark like an angry, chained-up dog, while others, which seem identical in every way, can send tornadoes spiraling to the ground, killing and injuring people, destroying farms, homes and livestock, and causing, from 1982 to 2002, 30 percent of all catastrophic weather losses in America -- more damage than all tropical storms for the same period. The information captured by Wurman's Dopplar on Wheels (DOW) radar trucks won't stop tornadoes from forming, but they may eventually help extend the warning time given to people who live and work in Tornado Alley.

This past week, Wurman and a small armada of radar trucks -- in their stowed position the radar dishes look like giant martini glasses -- headed out to chase. He was joined by a gaggle of students from meteorological powerhouses across the country (University of Oklahoma, Penn State, MIT) as well as Sean Casey and his tanklike, armor-plated Tornado Intercept Vehicle (TIV), which looks like a crazy parade float made out of duct tape. They ran into two large tornadoes in the Texas Panhandle.

When I caught up with Wurman and Casey by phone, Wurman seemed particularly pleased about the intercept, which occurred near Paducah, Texas, on May 13. "The tornado was very large, and rain-wrapped," Wurman said. From the safety of his radar truck he could detect a distinct "eye" of high-velocity winds within the rotating parent storm that was more than half a mile wide. This had to be a tornado. To find out, and to test the DOW team's ability to maneuver Casey (safely ensconced in the armor-plated TIV) into the mysterious "near environment" of the swirling vortex, Wurman used his two-way radio and radar to guide Casey to a point just north of the circulating winds. Casey could see nothing outside his vehicle, "but the wind was howling," he told me. "It must have been well over 70 miles per hour." Casey, whose easy, soft-spoken manner tends to understate actual danger, said of the event, "Well, it was Friday the 13th, after all. Rain and hail started coming into the seams of the doors. The wind was howling." And then it was over.

Surprisingly little is known about tornadoes, as compared with other natural phenomena. The definition of a tornado is, scientifically speaking, vague; its climatology virtually unknown. We know about as much about tornadoes now as we did about the human anatomy at the beginning of the 15th century, before Vesalius. We poke and probe, and we know one when we see one, but it's hard to pin down its most basic aspects. The man widely regarded as the founder of contemporary tornado science, Tetsuya Theodore ("Ted") Fujita, defined a tornado as the fastest quarter-mile of wind over any given section of terrain, which doesn't exactly bring the beast into focus. A commonplace definition, "a violently rotating column of air connected to the base of a parent storm," while serving a purpose, is almost entirely qualitative, as most severe storm meteorologists would agree. Within the vortex or "core flow region," the area bounded by the strongest winds, next to nothing is known.

Extending outward from this is the tornado's "near environment," a zone ranging in size from a few hundred yards to over a mile, which also remains, more or less, scientific terra incognita. Practically speaking, it is a place where violent things happen very fast, very unpredictably from any direction. Beyond the matter of falling debris -- tree trunks, refrigerators, pickup trucks -- landing on your head (which would explain the armor-plated TIV), the tornado can suddenly intensify, or change direction, or split into a hydra of satellite vortices, or clone itself, or do all of these things simultaneously. It can lull you to sleep, stretching into a long, narrow rope, the signature of a dying tornado, but at this stage, it is prone to radical pendulum-like shifts in speed and direction that can send it charging toward you at 70 miles per hour.

Over the next few days, these winds will ensure there will be more tinkering and things to fix -- from broken antennae to radiator problems. There are over a hundred systems in each of the three DOW trucks, all of them keeping Wurman, Casey and their team busy. Yet everyone seems happy. This is summer camp for extreme science geeks. Against the backdrop of danger and high purpose, a certain amount of malarkey emerges -- as is inevitable when you gather together a large group of young, intelligent undergraduates, just now released from the burden of brain-bending courses in thermodynamics I and II. There are parties on "down days" when the weather is calm. It's spring, after all. Exams are done. Big weather -- the object of their heart's desire and the likely subject of their future scientific careers -- has begun to sashay across the plains in a grand cavalcade. For the moment, all they have to do for the next few weeks is hop on their horses, as it were, and ride out to meet it.