The doctor is a scrub

In its first half-season -- and surprise finale -- "Grey's Anatomy" shows "ER" how to maintain a healthy medical drama. 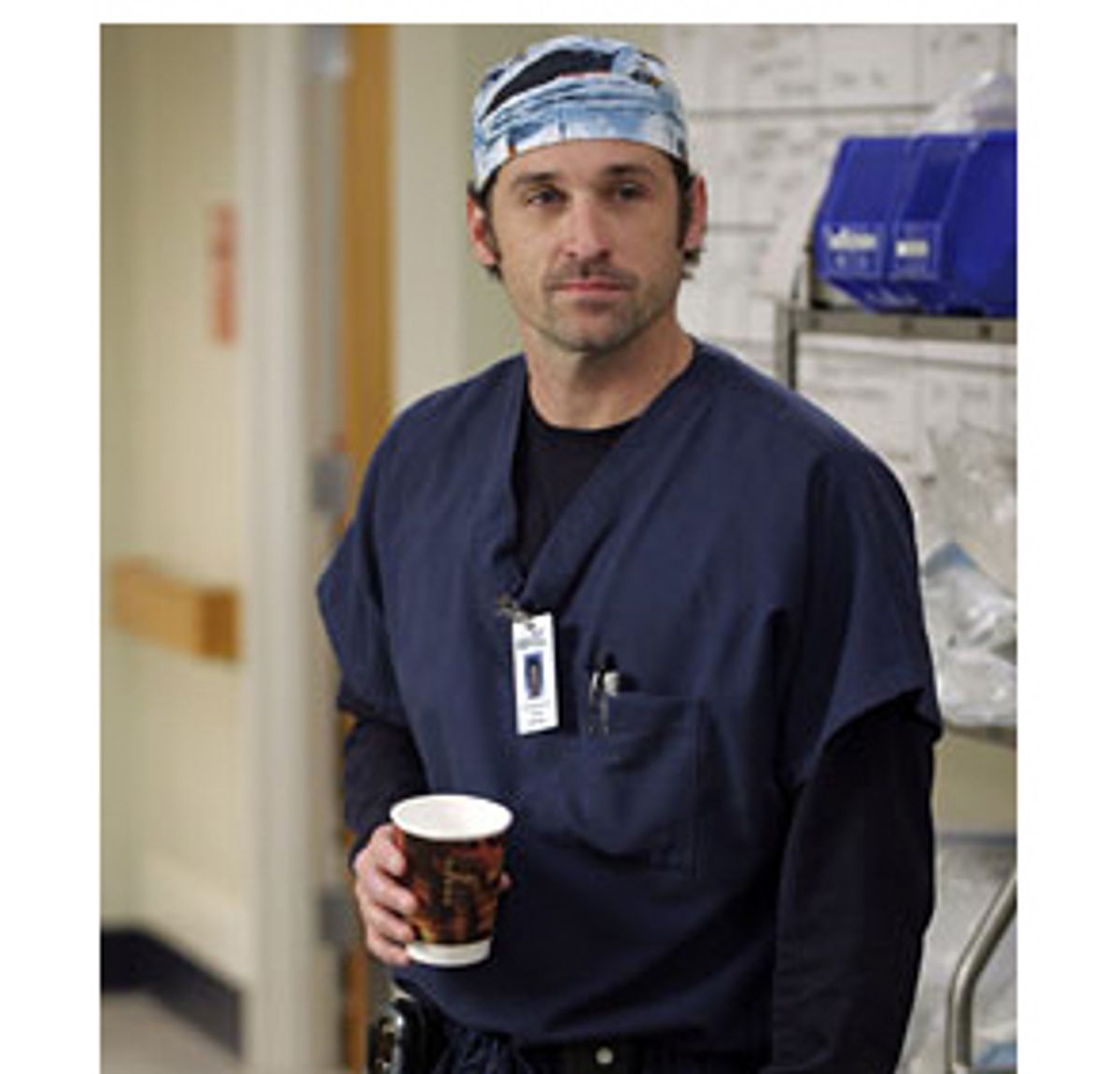 Which of the following four plotlines involving our eternally dewy and luminous heroine, Meredith Grey (Ellen Pompeo), do you think was most important in the first, very promising, half-season of "Grey's Anatomy"?

A) Meredith's coping with the hospitalization of her mother -- a successful surgeon -- for Alzheimer's, just as she begins her own surgical residency.

B) Her realization that a one-night stand is actually her new boss, Dr. Shepherd (Patrick Dempsey, looking five weeks older than when he starred in 1987's "Can't Buy Me Love").

C) Her post-surgical freakout when she believes her fingernail punctured her glove -- and possibly a heart she was holding, just before it was transplanted.

D) Her tireless search for the perfect scrunchy to hold back those silken locks.

Anyone who has watched the series and doesn't harbor a deeply misguided crush on Dempsey can tell you that it's the actual medical dramas that are the heart of "Anatomy," and therefore the correct answer is "C." Unless, of course, that person is a writer or producer for "ER," the hospital show against which all others must now be measured, and the one that has strayed so far from its original success that it seems as confused as Dr. Carter (Noah Wyle) did 10 years ago when he first ambled into County General.

Back then, "ER" understood what "Grey's Anatomy" demonstrates so well now: A great hospital drama revolves around the realistic life-and-death decisions the characters have to make. That's especially true when they focus on scarily young interns -- like Grey and her fellow plebes, and Carter, way back when -- so naive and lacking in confidence they act as if they couldn't work a TiVo much less open a central line. The terrifying truth about all medical care -- that it's reliant on human judgment, vulnerable to human error -- animates these shows. Who could forget that excruciatingly memorable episode from "ER's" first season, when Dr. Greene (Anthony Edwards) misdiagnoses a pregnant woman's condition; we all learned the meaning of a medical term called "preeclampsia" and watched the prolonged disaster that followed. What made that episode so harrowing wasn't just the then-novel jittery camerawork and breakneck pacing, but the way it portrayed how the best-trained and most promising of young doctors could make a minor error that led to tragedy.

Early "ER" benefited from a particularly impressive cast and well-cut characters whose personal lives enhanced our interest in them. The self-doubting Dr. Lewis (the underrated Sherry Stringfield) was the product of a boozed-up family of low expectations; the charming Dr. Ross (George Clooney) was a womanizer with commitment issues. But it's a delicate balance, being a hospital drama staffed with intriguing doctors rather than a nighttime version of "General Hospital." So far, "Grey's Anatomy" appears to have figured out just the right combination -- even if its season finale came awfully close to forgetting it.

We first learned Sunday night that Dr. O'Malley (T.R. Knight), the stout-hearted Samwise Gamgee of the show, has picked up syphilis from his sweet new girlfriend, who may be the hospital's Typhoid Mary -- a sort of show in-joke, since we already know several of the doctors are hooking up on the sly. That includes Dr. Yang (the great Sandra Oh), who after sleeping with Dr. Burke (Isaiah Washington) becomes pregnant and appears to be scheduling an abortion from her cellphone at work. But because the procedure is actually delayed until next season, and she has a meaningfully warm exchange with Burke (they coyly reassure each other they don't have to be tested for the syph -- romantic!), the writers seem to be keeping that resolution up in the air. And then there's our Meredith.

The season started out with Meredith rolling out of bed on her first day of work, mumbling apologies to her dimpled conquest from the night before, then arriving to her new job in time to see him again, and learn that he's her boss.

As played by Pompeo, an actress whose skin is so translucent she threatens to completely disappear at any moment, Grey is a tough but emotional type: smart and confident, but needy and hungry for validation. She's a classic good girl, a people pleaser, who is also trying to figure out the riddle of adulthood: how to be happy. Shepherd makes her happy, so she stays with him, even after everyone tells her to stop, after she faces the bitter recrimination from her jealous fellow interns and new best friends, after her other supervisors haze her. [Warning, spoiler alert.]

Then, in the final moments of last night's show, a series of subtle little clues start to make sense -- the particular outrage toward the relationship by the chief of staff and other higher-ups, Dr. Shepherd's avoidance of certain phone calls, the deep suspicion that anybody Patrick Dempsey would portray could actually be good -- Dr. Grey is introduced to Mrs. Shepherd, the wife he's been hiding all along.

So everything I just described makes you think, "A hospital really is just a backdrop for a great soap!" And you would be right, except the real glue to even the season finale is the weird little medical cases (a bloated man whose mysterious death prompts an illegal autopsy, a man who is discovered to have an ovary, a secret surgery to remove the chief of staff's brain tumor) and the way the doctors react to them. Besides, the makers of "Grey's Anatomy" can be forgiven if they tried hard in the season finale to amp up their characters' personal drama: They want us to care about them enough to follow them through the exploits of next year. And besides, their foibles, if sensational, aren't out of the realm of possibility, unlike what we've seen happen on "ER."

Last week's season finale of "ER" featured a final goodbye to Dr. Carter, as Wyle finally leaves the show after a long, long journey. And by that, I mean a long journey for us. In recent seasons, John Carter's been the focus of a series of boring, drippy detours that were probably insisted upon by Wyle's people, but that only showcased how many feelings Wyle chooses to emote with the same blank, slack-jawed expression. Wyle seemed personable in the early "ER" years, when Carter was a newbie, fresh-faced and a little dumb and sensitive, prone to tear up when the weight of the world just seemed too much to bear. But a decade later, the annual Get Carter story lines (I've been stabbed! I'm a drug addict! Grammy died! Africa's scary! My hot new pregnant French wife lost our baby!) are enough to reduce anybody to a blank, slack-jawed expression.

"ER" really seems to have been stricken with more than its fair share of actors who outgrow their scrubs. Before he left, George Clooney started landing bigger, more implausible, story lines as did Anthony Edwards, whose Dr. Green evolved from the show's affable Everyman to a victim of a shrewish wife, a brutal beating and then finally brain cancer.

In this, there may be a clear lesson for the creators of "Grey's Anatomy": Give these TV doctors shorter rotations. Meredith Grey and her fellow interns -- like Carter, Green and Ross before them -- will, in a season or two, relax and find their composure. Then we'll be bored with them. So then get rid of them, and bring in a whole new cast of interns -- and save us from the stabbings, the beatings, the brain tumors we'll never care about. Just make sure that at least one of the newbies is named "Grey." And keep the dimpled guy around -- married or not -- for as long as possible.