The Senate's compromise on the filibuster won't stop the president's quest for absolute power. 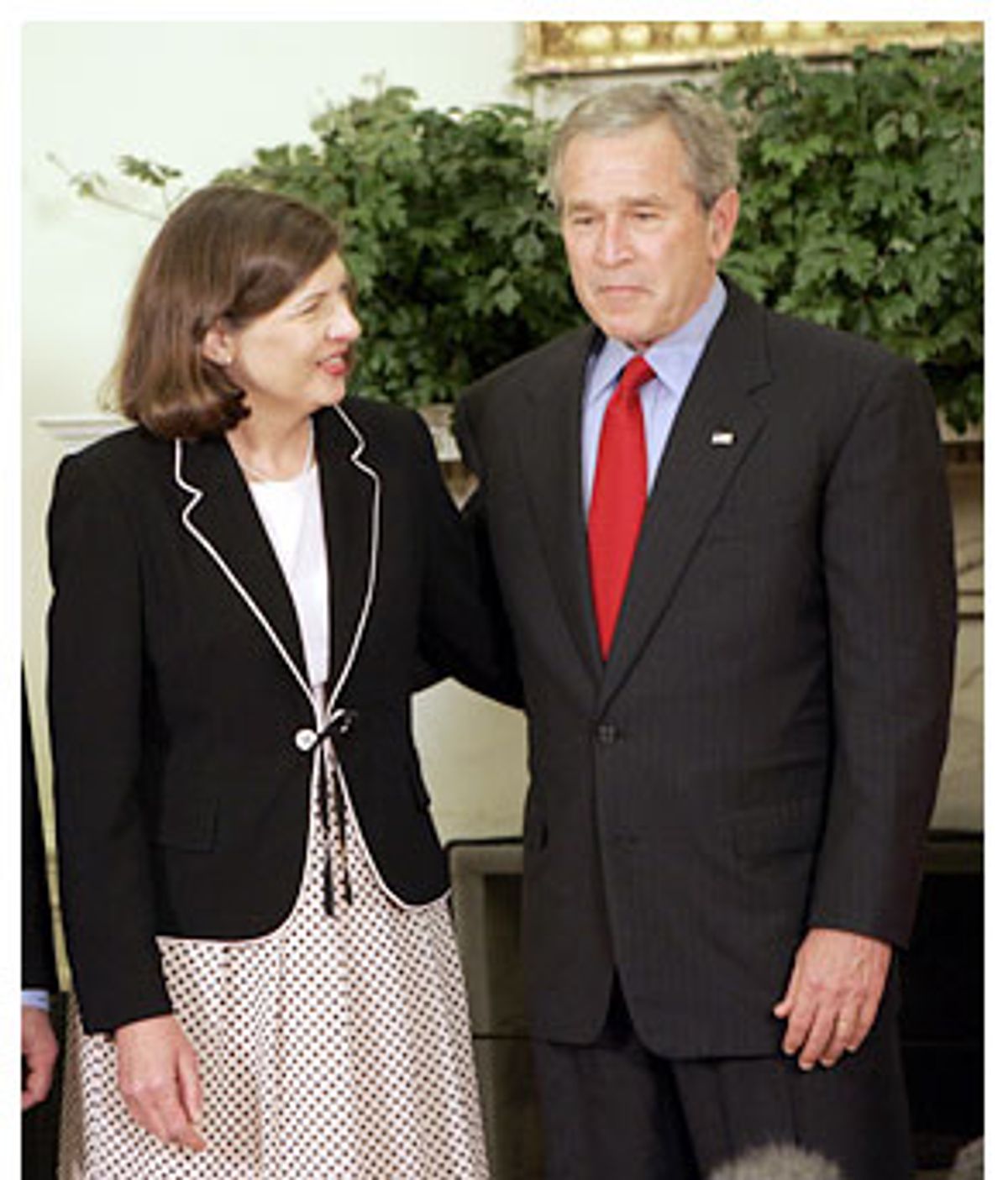 President Bush's drive for absolute power has momentarily stalled. In a single coup, he planned to take over all the institutions of government. By crushing the traditions of the Senate he would pack the courts, especially the Supreme Court, with lock-step ideologues. Sheer force would prevail. But just as his blitzkrieg reached the outskirts of his objective he was struck by a mutiny. Within a span of 24 hours he lost control not only of the Senate but, temporarily, of the House of Representatives, which was supposed to be regimented by unquestioned loyalty. Now he prepares to launch a counterattack -- against the dissident elements of his own party.

Bush's wonder weapon for total victory was a device called the "nuclear option." Once triggered, it would obliterate a 200-year-old tradition of the Senate. The threat of a Democratic filibuster in the Senate of Bush's appointments to the federal bench would set the doomsday sequence in motion. The Senate majority leader, Bill Frist of Tennessee, would call for a change in the rule, and a simple majority would vote to abolish the filibuster. Bush's nominees would then sail through.

Unlike the House, the Senate was constructed by the constitutional framers as an unrepresentative body, with each state, regardless of population, allotted two senators. (Currently, Republicans have 55 senators who represent only 45 percent of the country.) The Senate creates its own rules, and the filibuster can be stopped only by a super-majority of 60 votes. Historically, it was used by Southern senators to block civil rights legislation. In the first two years of the Clinton presidency, Republicans deployed 48 filibusters, more than in the entire previous history of the Senate, to make the new Democratic chief executive appear feckless. The strategy was instrumental in the Republican capture of Congress in 1994. By depriving Democrats of the filibuster, Bush intended to transform the Senate into his rubber stamp.

For many senators the fate of the filibuster was only superficially about an arcane rule change. And shameless hypocrisy was the least of the problem. (Frist, like most Republicans in favor of the nuclear option, had enthusiastically filibustered against Clinton's court nominees, 65 of which were blocked from 1995 to 2000.) If Bush had succeeded he would have effectively removed the Senate's "advice and consent" on executive appointments, drastically reducing its power.

Over the weekend, two elders, Sen. Robert Byrd, D-W.Va., and Sen. John Warner, R-Va., together privately pored over the Federalist Papers, written by the constitutional framers, to refresh their thinking about the inviolability of the Senate. On Monday, seven Republicans and seven Democrats signed a pact that preserved the filibuster under "extraordinary" circumstances and allowed several of Bush's appointments to be voted on.

The mutiny is broader than is apparent. More than the seven Republican signatories supported the accord, but they let the others take a public stance without revealing themselves. Bush's radicalism offended their conservatism. Dwight Eisenhower (or even Bush I), not Bush, is their preferred model for a Republican president. These Republican senators are the equivalent of the Republicans on the Supreme Court -- Sandra Day O'Connor and Anthony Kennedy -- who are conservative but operate without ideology, and hold the balance against the aggressive right-wing justices.

The day after Bush was frustrated by Republicans in the Senate, 50 Republicans in the House deserted him on the issue of stem cell research. His policy limiting scientific work that might cure many diseases is a sop to the religious right, which views the stem cell question as an extension of abortion. (Historians will discover that in early August 2001 Bush was immersed in delivering a nationally televised speech on stem cells while ignoring the CIA memo titled "Bin Laden Determined to Strike in U.S.") Debate in the House was marshaled by Majority Leader Tom DeLay, who argued that Bush's policy must be supported because "we were all at one time embryos ourselves. So was Abraham. So was Muhammad. So was Jesus of Nazareth." (DeLay was apparently ignorant of the doctrine of the Virgin Birth, which makes it unlikely that Jesus was an embryo.) Bush promised to veto the stem cell bill passed with massive Republican defections, the irony of his opposition to the filibuster going unmentioned.

The compromise pact in the Senate on the filibuster hardly postpones the coming storms. The White House intends to push judicial nominees whom Democrats are almost certain to filibuster. With the elimination of the nuclear option, the filibuster may also be used against Bush's Supreme Court appointments. What's more, leaders of the evangelical religious right have denounced Republican senators as sellouts. One of the most influential, James Dobson, cursed one of the silent supporters of the compromise, Sen. Trent Lott, R-Miss., the former majority leader, as a Judas, and Lott in reply called Dobson "quite un-Christian."

Meanwhile, the conflict has highlighted the Republican presidential succession of 2008, pitting Frist, positioning himself as the darling of the right, against the cantankerous McCain, one of the Republicans' magnificent seven. Within the GOP, metal is scraping on metal. But the greater the resistance, the more Bush presses forward. His unilateralism abroad has been brought home with a vengeance to his partisan wars.

In Federalist Paper No. 69 (which may have been reread by Byrd and Warner), Alexander Hamilton concludes his disquisition on the difference between the "qualified" powers of the American presidency and the "absolute" powers of the king of Great Britain: "The one has no particle of spiritual jurisdiction; the other is the supreme head and governor of the national church! What answer shall we give to those who would persuade us that things so unlike resemble each other? The same that ought to be given to those who tell us that a government, the whole power of which would be in the hands of the elective and periodical servants of the people, is an aristocracy, a monarchy, and a despotism."