"Fair and balanced" -- the McCarthy way

CPB head Kenneth Tomlinson, who is leading a jihad against "liberal bias" in public broadcasting, and one of his two new ombudsmen both worked for the late Fulton Lewis, a reactionary radio personality associated with Sen. Joe McCarthy. 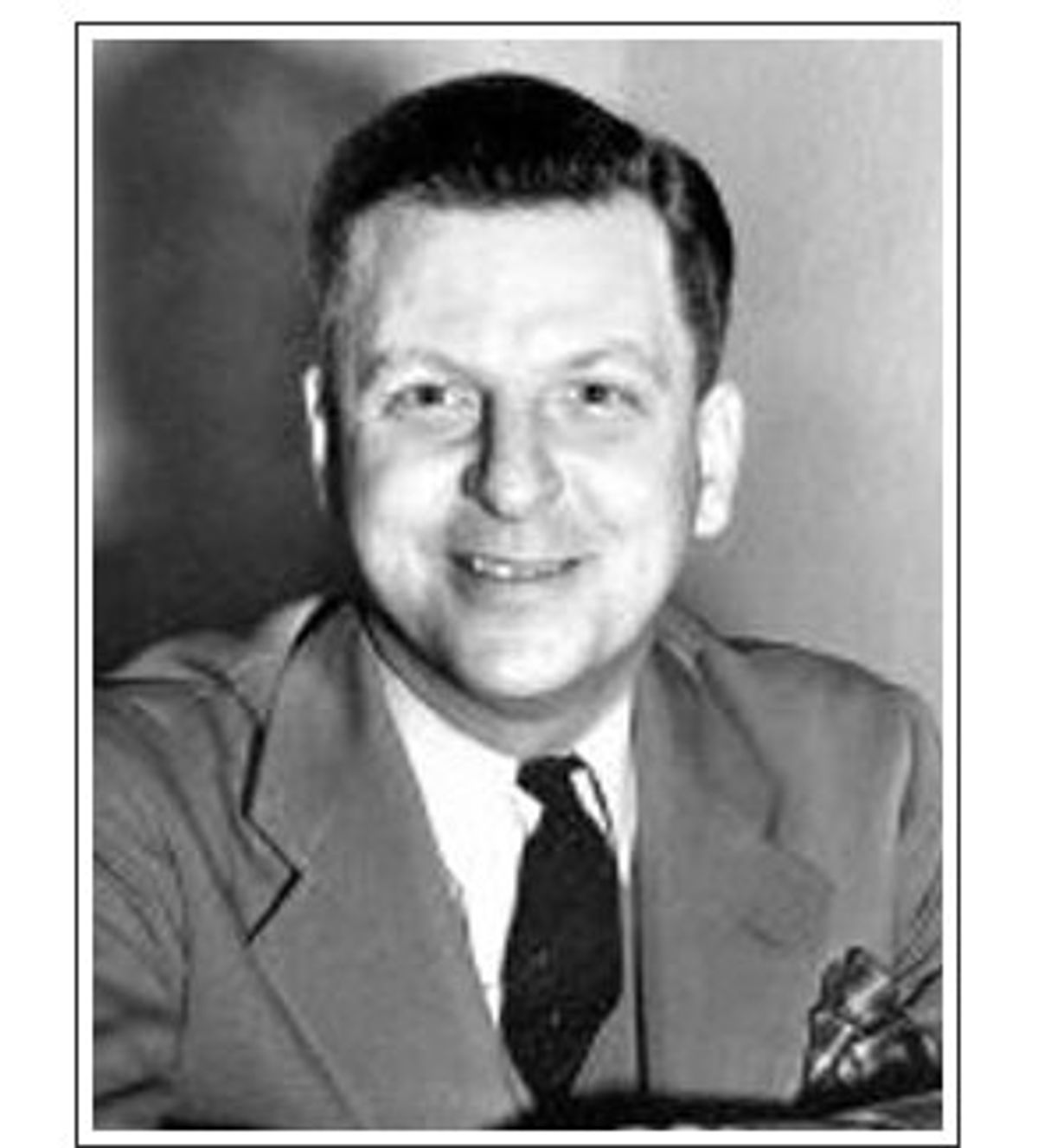 As the debate over fairness and balance in public broadcasting rages on, there's a curious historical connection to be found between two men at the forefront of the current conservative crusade and a famous radio broadcaster from 50 years ago. How the three crossed paths -- and the way they practiced journalism -- put some of the debate into sharper focus.

A main figure in the roiling controversy is Kenneth Tomlinson, the head of the Corporation for Public Broadcasting, who insists that public radio and television suffer from a liberal bias and that actions -- such as adding conservative-leaning programs to the lineup -- must be taken to counterbalance it. Tomlinson recently singled out the weekly news program "Now," once hosted by liberal Bill Moyers, as the cause for his concern about bias.

Tomlinson's conviction is so strong he once suggested to the CPB board that Fox News anchor Brit Hume be invited to "talk to public broadcasting officials about how to create balanced news programming," according to a report broadcast May 20 on National Public Radio.

Tomlinson's charge of liberal bias runs counter to two nationwide polls conducted by the CPB in 2002 and 2003, which found little concern among Americans about bias in public broadcasting. The CPB is a federally funded agency that serves as an umbrella organization for public radio and television. Created by Congress, its purpose is both to help raise money and awareness for public broadcasting and to protect it from political pressure. But now the CPB itself has become the source of such pressure.

Tomlinson's attempt to push back the so-called liberal media is not surprising given his journalistic past -- which is where Fulton Lewis Jr., the broadcaster with the intriguing, albeit distant, connection to the ongoing debate, comes in. A prominent radio broadcaster in the '40s, '50s and '60s, Lewis was known for his complete lack of objectivity. At his commercial peak he was heard on more than 500 radio stations and boasted a weekly audience of 16 million listeners. An erstwhile Rush Limbaugh, Lewis was the master of the partisan smear who rarely strayed from GOP talking points. In 1948, New York Herald Tribune radio columnist John Crosby suggested that Lewis "ought to be recognized as a campaigner, not as a commentator, and his national air time be paid for and so listed by the Republican National Committee."

In 1949 the New Republic noted that Lewis' "wild charges were part of his campaign over many years to smear in every way possible the New Deal, the Fair Deal, and everybody not in accord with the most reactionary political beliefs."

In a 1996 interview, poet Allen Ginsberg recalled how Lewis in the '50s held special disdain for Julius and Ethel Rosenberg, who were convicted of espionage for the Soviets and executed. "There was one commentator on the air, called Fulton Lewis, who said that they smelt bad and therefore should die. There was an element of anti-Semitism in it," Ginsberg said.

Lewis did not simply target liberal Democrats but also went after Republicans who strayed from the far-right agenda. In 1958 Caspar Weinberger, who later served as President Reagan's secretary of defense, ran for attorney general in California as a moderate Republican against an arch-conservative Republican who was a close ally of Richard Nixon's. Lewis, a Nixon acolyte, derided Weinberger during the campaign as "the People's World candidate," referring to a communist newspaper.

Hunting communists became a full-time job for Lewis. According to a flattering 1954 biography of the broadcaster, "Praised and Damned: The Story of Fulton Lewis, Jr.," Lewis was "as close to Senator Joseph R. McCarthy as any other man in the national scene." Look magazine agreed, calling Lewis one of McCarthy's "masterminds."

In "Praised and Damned" Lewis describes his loyalty to McCarthy this way: "When you know an individual to be attempting to do a public service, a patriotic service, and you see him maligned by groups which are not thinking in the public interest, you have a tendency to be a little over-generous with the guy."

Even after McCarthy was revealed as a phony who could not document his claims that hundreds of communists had infiltrated the federal government, Lewis remained loyal. Over time, the broadcaster's reputation faded, and today he's a largely forgotten figure (although in 1987 the Washington Post remembered Lewis as "one of the most unprincipled journalists ever to practice the trade").

What's interesting about Lewis now is that two men at the forefront of the effort to rid public broadcasting of its presumed liberal bias both learned journalism at his knee. One, CPB chief Tomlinson, worked as an intern for Lewis. The other, William Schulz, whom Tomlinson recently named as one of the CPB's two ombudsmen, was a writer for Lewis.

To some, the idea that these two are in charge of promoting objective journalism in public broadcasting is appalling. "It's shocking and disgraceful," says former New York Times columnist and reporter Anthony Lewis, who won a Pulitzer Prize for his coverage during the McCarthy era. "If both men wrote for Fulton Lewis it means they were dedicated to an extreme-right position that should disqualify them from determining somebody's objectivity."

While there is no mention on Tomlinson's official CPB bio of his association with Lewis, an Oct. 16, 2002, NewsMax.com article reported: "Tomlinson's résumé also includes an internship with the late Fulton Lewis Jr., a conservative network commentator in the 'pre-Rush' days of AM radio."

Likewise, the bio of Schulz that the CPB posted online after he was named one of its ombudsmen fails to mention his connection with Lewis. But in a 1997 interview, Schulz recalled, "I went to Antioch College in Ohio, and they had a work-study program, and I got a couple of newspaper jobs, and then I worked for Human Events. Then I went to work for Fulton Lewis Jr., who was a radio commentator and columnist."

Both Tomlinson and Schulz declined to comment for this article. Lewis died in 1966.

After working for Lewis, both men went on to long, successful careers as writers and editors at another conservative media bastion, the Reader's Digest, which the National Review recently dubbed "the quintessential magazine of 'red-state' America." The type of journalism practiced at Reader's Digest also raises questions about whether Tomlinson and Schulz are the best people to police for broadcasting bias.

Says Moyers of Tomlinson, "He seems happiest only in the circles of people who dis liberals."

During an interview with NPR that aired last week, Tomlinson defended his move to add more conservative programs to public broadcasting's lineup, stressing, "It's important to have voices in journalism coming from different directions." He added, "The reason why we view [PBS's] Jim Lehrer as such a balanced and fair journalist is because he gives no apparent indication of bringing a political point of view to the table."

Tomlinson's hunger for newsroom diversity and straight-down-the-middle objectivity appears to be a newfound one, because there certainly was none of either on the Lewis broadcast or during Tomlinson's time at Reader's Digest, a magazine famous for its undiluted Republican voice.

"The magazine spent half a century advocating a strong Republican line," says John Heidenry, who wrote the definitive history of the publication, "Theirs Was the Kingdom: Lila and DeWitt Wallace and the Story of the Reader's Digest." He notes that during the '50s, '60s and '70s, Reader's Digest's advocacy brand of pro-government journalism served as a dependable platform for the FBI as well as the CIA.

At the time, Schulz was running the D.C. bureau. As Heidenry describes it in his book, "Though cynical about the Digest's grind-it-out conservatism, he kept an autographed photograph of Joe McCarthy in his home and claimed that the Wisconsin senator was a very misunderstood man."

According to Heidenry, Schulz's D.C. bureau routinely tried to kill articles that strayed from the magazine's traditional far-right agenda. Additionally, the bureau, anxious to play up Cold War fears, interviewed defectors from Russia but sometimes fabricated the details of their tales. "So the whole concept of fact checking was moot," Heidenry told Salon in an interview. "They created their own facts. The Washington bureau certainly did not practice an objective type of journalism."

Tomlinson and Schulz's overseeing a drive to correct partisan journalism in public broadcasting, Heidenry says, is "the pot calling the kettle black."

According to the Ombudsman Association's code of ethics, an ombudsman is a "designated neutral" who "strives for objectivity and impartiality." Yet much of Schulz's work for Reader's Digest was precisely the type of loaded, often alarmist and partisan reporting that he's now supposed to stamp out at PBS and National Public Radio.

In early 1968, Schulz previewed a planned march on Washington led by Martin Luther King Jr. The article, leaning heavily on unsourced quotes from Republican government officials, painted a bleak picture of the demonstration, all but predicting violence in the streets. Schulz appeared to be mostly concerned about America's image overseas, writing, "One thing is certain: whether or not all of the protesters' plans materialize, the nation faces international humiliation as a result of the Washington campaign. Communism's worldwide propaganda apparatus is set for a field day." (Schulz's article on King appeared in the Digest's April 1968 issue, the same month King was assassinated.)

Later that year, in the August issue, Schulz, attacking welfare, charged that in California "able-bodied hippies were financing communes with welfare checks." And in a 1969 article, he sounded a similar alarm over student protesters, insisting they "posed a major threat to the continued existence of our democratic system."

Luckily for Schulz and Tomlinson, neither Reader's Digest nor Fulton Lewis ever employed an ombudsman to check for fairness and balance.