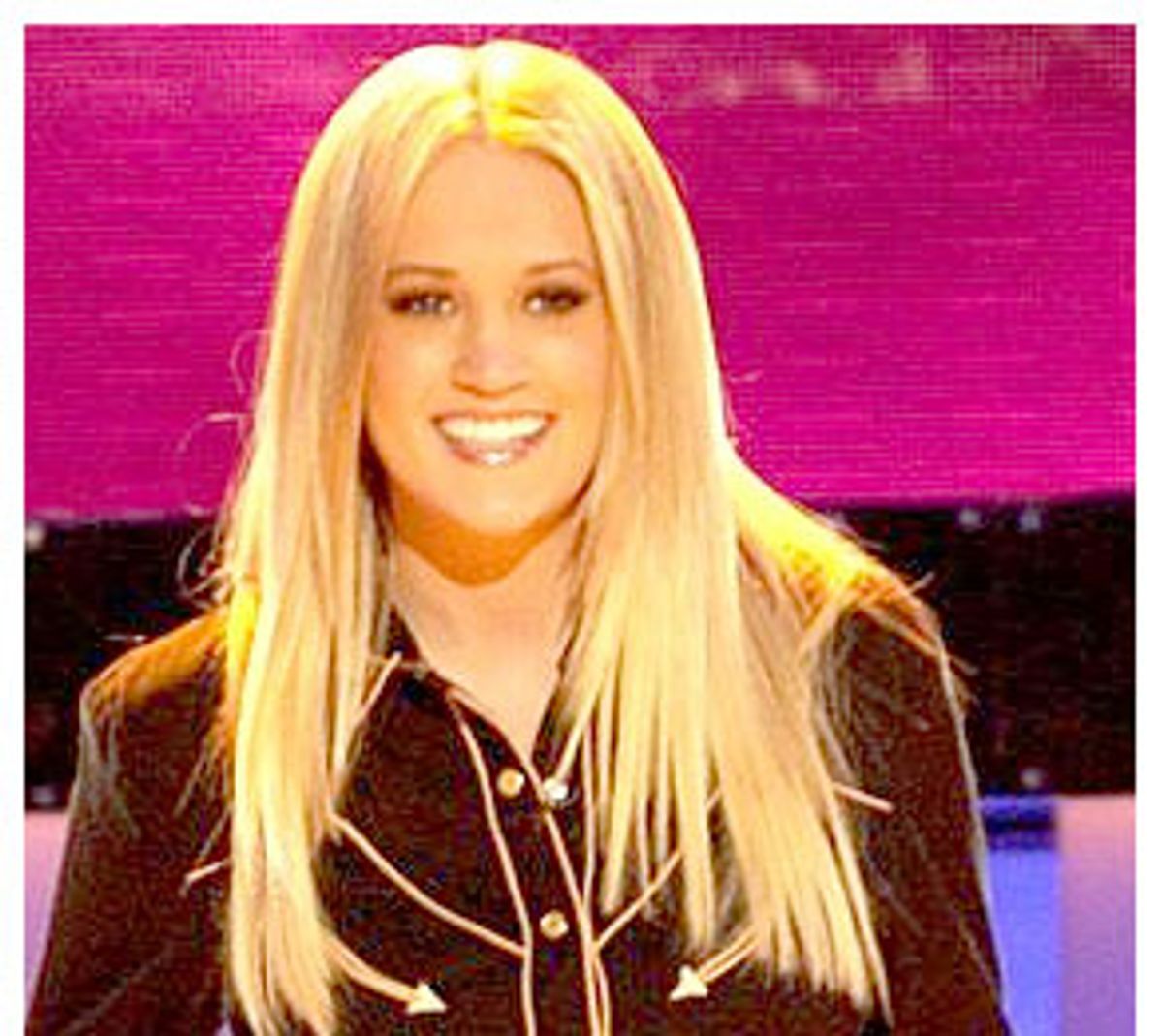 There was a moment in last night's finale of "American Idol," when a particularly embarrassing, snicker-inducing failed idol contestant turned around to find his own personal idol, David Hasselhoff, smiling and waving and walking through the auditorium to sit down next to him. It was astounding. It was so far over the top, so purely farcical, so shameless and so absurd, that it fairly bounded toward transcendence.

This, I said to myself, is a Great Pop Culture Moment. It was like a "South Park" parody of "American Idol" -- because really, the only place David Hasselhoff belongs these days is as an object of mirth on "South Park" -- built directly into the show. But it was just a moment. And it passed.

But let's go back to the beginning. Let's go all the way back to ... Tuesday night, when I first laid eyes on the pulsating, sticky mess of British ingenuity and modern American shame that is "American Idol." Yes, my "American Idol" cherry was popped just two days ago. And yes, there was lots of blood.

One of the two final contestants was exactly what I expected: Carrie Underwood, she of the blandly pretty face and the blandly pretty voice; sweet, a little awkward, and with all the charisma of a damp sponge. The other was not. Bo Bice is a cultural mistake, a horrifying monstrosity of mixed metaphors and botched styles, like a Vegas crooner impersonating a grunge rocker. Bo is what would happen if a redneck ate a hippie. "You look like my chemistry teacher," remarked Simon, "American Idol's" tetchy, Svengali-like headmaster, proving that he is in fact from some nightmarish alternate universe and not, as he claims, from Brighton.

Tuesday night was the final sing-off, and Bo and Carrie each had three songs to strut their stuff. Each performed two wretched "originals" (i.e., songs composed by "Idol's" in-house staff of songwriters) and a cover. Bo's was Ides of March's "Vehicle," Carrie's was Martina McBride's "Independence Day." Carrie sang safely and competently, but with some pitch issues on high notes. Bo is, aside from being the most smackable man alive, a better singer than Carrie, and a far more charismatic and natural performer. After singing, Carrie looked thrilled and a little bemused by the applause and adoration, and approached the judges with great humility. Bo soaked up the love with a smile that said he knew he deserved it all and more, and he received the judges' verdicts with a smirking curled lip so positively Malkovichian that I at one point toyed with the possibility that he was, in fact, John Malkovich, playing a brilliant prank on us all -- a hypothesis that at least helped to explain the all-out bizarreness of the man's persona.

It was a battle between a corn-fed mediocrity and a mutant mass of metastasized ego with a penchant for showing tufts of chest hair. Or, as the show would have it, of "the Country girl with heart versus the Southern rocker with soul." And, after America had voted by phone, the whole party reconvened 24 hours later to announce the results. But first ... an hour and 45 minutes of filler!

The show began with a medley of Beach Boys songs performed with very little regard for pitch by the 10 previously rejected semi-finalists. Brian Wilson no doubt would have been troubled by the spectacle, if he were not already permanently so. Bo reprised "Vehicle," Carrie, "Angels Brought Me Here." Bo and Carrie dueted on "Up Where We Belong." There was boring live footage of thrilled masses in Bo and Carrie's hometowns (Helena, Ala., and Checotah, Okla., respectively). There was a silly and lengthy sketch about an investigation into Simon Cowell's clandestine affair with ... himself (a lame reference to a lame story). And, since no TV spectacle could be complete without a dash of Schadenfreude, we were treated to a recap of the most embarrassingly bad Idol auditions, and to the painful sight and sound of an obese young black woman performing "The Star Spangled Banner" with undisguised passion and ear-scrapingly atonal verve.

At the opening of the show, host Ryan Seacrest (an extraordinary non-presence, given how much time he spends on-screen) had announced that the program would include appearances by Lynyrd Skynyrd, Kenny G., Billy Preston, Babyface, Kenny Wayne Shepherd and Rascal Flatts. As the minutes ticked by and the remaining time got shorter and shorter, I started to wonder how they were going to fit them all in. And then Seacrest said the magic phrase "all-star medley." Never words you want to hear.

First off, though (and with the notable exception of Lynyrd Skynyrd and the partial exception of Babyface), what a lame batch of all-stars! I mean, come on, Kenny Wayne Shepherd? Has anybody cared about Kenny Wayne Shepherd since he was 18? The "medley" began with Carrie performing with Rascal Flatts (it is, by the way, an awesome thing about country music that ugly people can still be stars), followed by short numbers by each of the other all stars, appearing with contestants who were rejected from the final 12. I liked the chubby one, the spiky blond one, and the tall skinny one with the afro. If you watched the show this season, you'll know who I'm talking about. If you didn't, I'm sure you don't care who I'm talking about. The sole redeeming moment was a few solo phrases sung by Babyface, a reminder of what an excellent pop singer sounds like -- and that there is such a thing.

Last up was Bo singing "Sweet Home Alabama" with Skynyrd, and what a trip that was. The members of the band (they look so old!) were a frightening glimpse into Bo's future. They looked just like him, but desiccated and pallid, drained of life. Not only that, but Bo's vocal sounded almost exactly like the original, and he seemed so at home that I started to wonder if he was, perhaps, just a straightforward "Southern rocker," and not the aberration I had taken him to be. And then I noticed: He was wearing a velvet shirt. Ah Bo, how wily is your sense of the inappropriate, how ingenious your ability to get it just exactly wrong.

As you no doubt know already, voters chose Carrie over Bo, a mistake if you're choosing on vocal prowess or performance know-how, a no-brainer on likability. The program ended with her singing through tears of joy -- which might have been touching, if two hours of "American Idol" hadn't temporarily destroyed my ability to be touched by anything. Much has been made of the fact that she's a "country" singer, but it doesn't need to be. All it really means is that she'll sing country-inflected pop, rather than R&B-inflected pop like Ruben and Fantasia, or, um, pop-inflected pop, like Kelly and Clay. (It is true, though, that country mannerisms are a good deal more flattering to a mediocre voice than are R&B mannerisms.) How successful her post-"Idol" career is will depend entirely, as it has for past idols, on how good her manager is, and how good the songwriters and producers they hire are. Kelly's have been very good indeed; Fantasia's have been incompetent.

I come away from my inaugural "Idol" experience with two conclusions: that I never want to watch the show again, and that even when something seems irredeemable, a strategic unveiling of David Hasselhoff can lead the way to bliss.