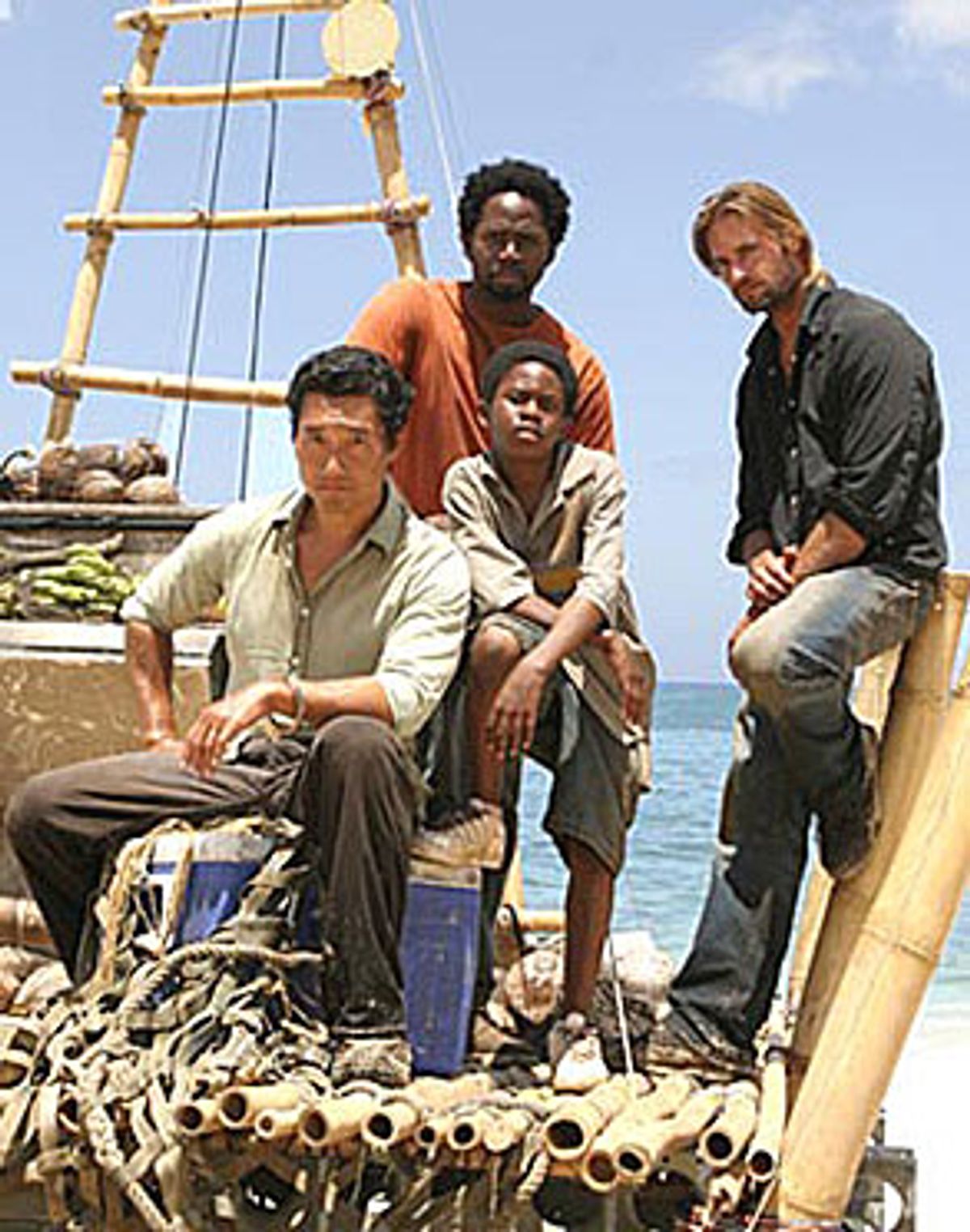 "Lost" is made for TiVo the way some series ("24," "Alias," that masterpiece "The Wire") seem made for DVDs. Last night's season finale demanded full deployment of such little-used features as slo-mo (Exactly what is that thing dragging Locke through the underbrush? You got me) and frame-by-frame (Is there something funky about that smoke? Yep), not to mention that faithful standby, the instant replay button (Wait -- did the creepy jungle bird actually screech, "Hurley!" as it flew away? Yes!). We'd be lost ourselves, without it.

We have answers, and yet no answers, or at least not the ones we thought we were promised in assorted tantalizing pronouncements tossed to the press by the show's creators, J.J. Abrams and Damon Lindelhoff. The group of friends I watch "Lost" with declared that all we wanted from the finale was 1) to see the Others, the shadowy, menacing people who share the island with our castaways, and 2) some kind of payoff on Hurley's numbers, the sequence of digits (4 8 15 16 23 42) that netted him a massive lottery and apparently placed him under a curse.

Well, we got an eyeful of some scraggly-looking Others (and here, if you have somehow managed to become interested in "Lost" without realizing that it is a mystery, and therefore likely to be spoiled if you read anything at all about an episode before seeing it, you might want to stop), but no further insight into what they're up to, unless it's possible to run a crystal meth lab off a small fishing boat. We got a long, goofy and seemingly extraneous sequence about Hurley's frantic race through the airport to catch the fateful flight. An immediate second viewing reveals a liberal sprinkling of those ominous numbers -- it's 23 degrees out!; he's driving 42 kilometers per hour!; boarding at Gate 23; $1,600 for the old dude's scooter!; look at the numbers on that girls soccer team's jerseys! Surely, Messrs. Abrams and Lindelhoff, you jest.

Hurley even glimpsed the numbers on the hatch just before Jack and Locke blew it open, but what could he do, even if he'd had more time? "The numbers are bad!" he shouted as he tried to stamp out the fuse, a statement that no "Lost" viewer would question, but that none of his comrades -- not even the increasingly spooky Locke -- is ever likely to believe. Hurley is the show's most endearing character, the most grounded, the least addled by murky personal preoccupations and regrets, so it makes sense that he's got the freakiest secret to keep. As for the hatch itself: Well, it leads to a very deep, very dark shaft. Thanks.

Then there's the "monster." Is it invisible, or what? Why, as Karen Carpenter might ask, do trees shoot into the sky every time it stomps by? Is it up (where Locke stares when menaced by it) or is it down (where it, or something like it, tried to drag him)? Though the finale seemed to add precious little to the French woman's definition of the thing -- "it's a security system" -- once you stop studying the scenes for visual clues and really listen, the grinding of chains and gears is unmistakable. My bet: It's a mechanical apparatus located in the honeycomb of tunnels underneath the island's surface. What that bizarrely sentient-seeming smoke is all about is another matter.

All in all, not much in the way of information payoffs got dished out last night, but while we were slavering for solid facts, the groundwork has been laid for developments that will make "Lost" something more than just one long tease. A schism is brewing between Locke and Jack, not just over who's in charge, but over who best understands what's going on. Locke thinks it's something mystical -- an irony, as one of my "Lost" group points out, given he's named after the empirical philosopher -- and Jack, well, he's the man of science, according to Locke, though "sanctimony" fits, too.

Which prompts a question: Who's our hero? The blandly handsome and wholesome Jack is the obvious choice, but he's become increasingly unappealing, even to his fellow castaways. "Everyone wants me to be a leader until I make a decision they don't like," he pouts to Kate. That's not the problem, pal. Lately, you've shown the despot's tendency to confuse injuries to your pride with injuries to the community: Boone's death and Locke's secretiveness have irked you in ways you want to think are noble, but even the adoring Kate realizes are not.

Locke, on the other hand, is a zealot in the making, a man so disenchanted with his own ego he's all too ready to swap it for a higher power, even if it may turn out to be nothing more that a giant subterranean game of Mousetrap. Kate is too busy feeling sorry for herself, Sawyer is smart but infantile, and Sayid -- well, some of us would follow him anywhere, but he doesn't seem interested in taking charge.

It's all bait and switch: We sign up for monsters and metaphysical puzzles, but if we stay, it'll be for "Lord of the Flies"-style psychodrama, and interpersonal moments as tender as a box of Krispy Kreme donuts. What are we meant to think about those wordless flashbacks showing the characters boarding the plane, those almost unbearably stately interludes of Nothing Happening during the final 20 minutes when we're jonesing for cold, hard answers even worse than Charlie used to jones for those little brown balls of dope?

Once you realize what you won't be getting, those scenes are even more mystifying: The soon-to-be-smithereened Arnst (who introduced a nice bit of meta commentary into the finale when he complained about being shut out of "your merry little band of adventurers") helping Claire stow her luggage. Jack smiling politely to Locke. Hurley giving Walt (Walt!) the thumbs up before revealing that he is the source of the Spanish comic book. Once upon a time, a month ago, these people were strangers, the scenes seem to be telling us -- and they were nicer to each other then.

It would be weird, but appropriate, if "Lost" turned out to be like "Deadwood," a story about the mystery of how people manage to live together given how maddening people can be. (The French woman, named after yet another famous philosopher, stands for the alternative, and look what it's done for her.) The finale's chief plot twist -- that the Others only thought they wanted Claire's baby, which explains why they tossed her back to Charlie after a few days -- made less of an impact than the trauma that resulted from it. Seeing Walt kidnapped from the deck of the S.S. Deathtrap while Michael, once so eager to give him away, looked helplessly on, was a heartbreaker. As dismal as that damn raft looked, it turns out there are worse things.