The Bush administration tried and failed to strong-arm the rest of the world on nukes. As a result, the chances of runaway proliferation are higher than they've been in decades. 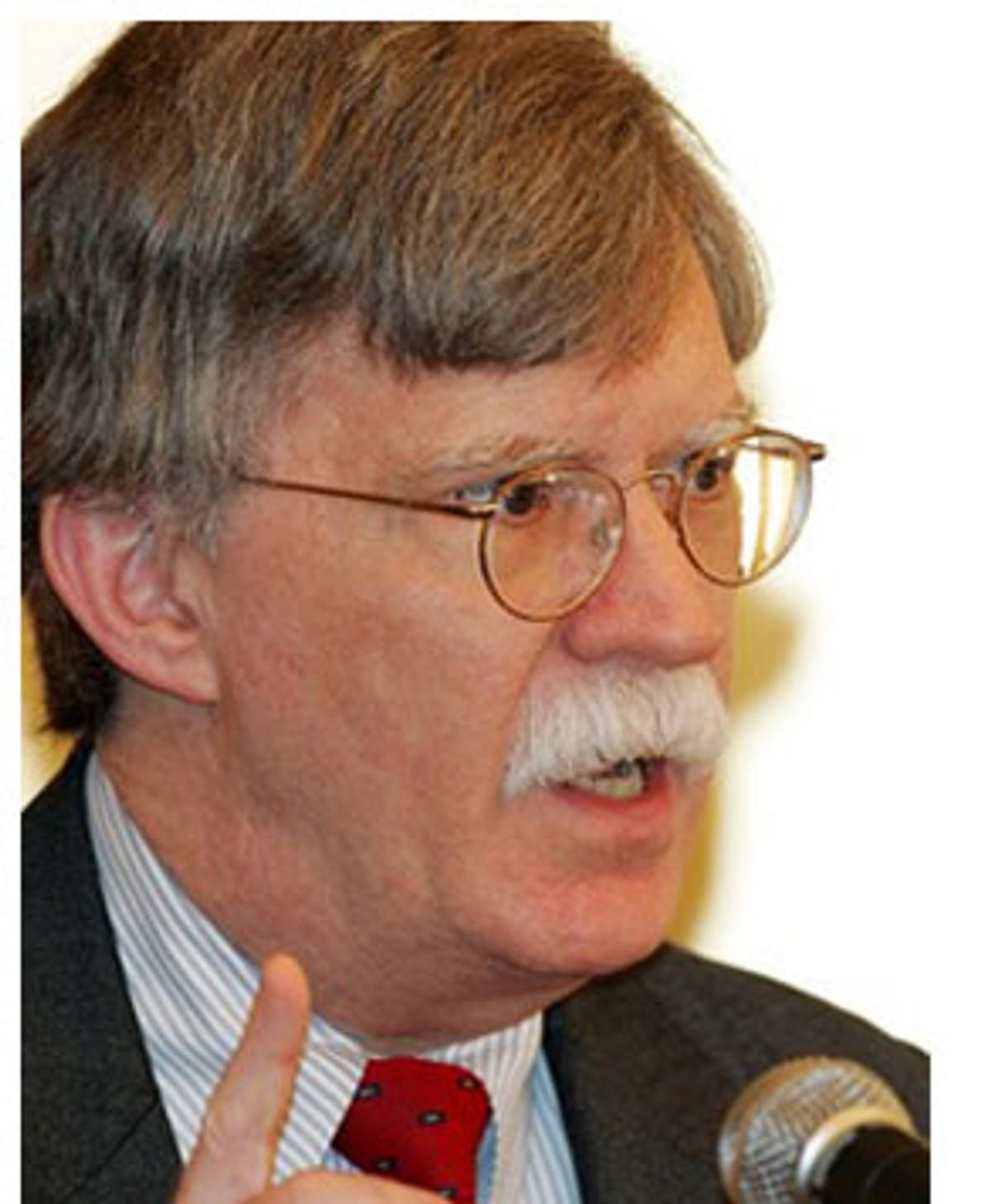 Although John Bolton has not yet been confirmed as the U.S. ambassador to the United Nations, his work goes marching before him. His "dead hand" was firmly clutching the throat of the American delegation at the Nuclear Nonproliferation Treaty review conference -- a monthlong gathering at the United Nations that petered out May 27 without agreement on a formal agenda, let alone on further steps toward nonproliferation.

Without saying it quite as explicitly as Bolton has said it in the past, the American position was to deny that the treaty has any force over the United States while at the same time demanding that it be applied vigorously against those it has unilaterally nominated as bearings on the "axis of evil." The Bush administration refused to allow anything else substantial, such as previous American commitments in the treaty and at earlier conferences, onto the agenda.

The failure of the conference led most of its delegates and observers to conclude that the chances of runaway nuclear proliferation are higher than they have been for many decades. Although most countries did not want to add themselves to future putative axes of evil by laying blame explicitly from the rostrum, their speeches and even more their off-podium talk made it clear whom they hold responsible for the failure of the conference: It was above all Washington, in its intransigence and seemingly untrammeled capacity for saying, "Do as we say, not as we do."

With no such inhibitions, Alice Slater of the anti-nuke organization Abolition 2000 declared, "By refusing even to discuss the commitments it made at past meetings, the U.S. has turned the world of nuclear proliferation into the Wild West, with a complete disrespect for the rule of law. The U.S. delegation is using cowboy politics to sabotage the [treaty] review conference."

Indeed, she and others accuse the die-hard nuclear hawks in the administration of deliberately trying to provoke North Korea into a nuclear test, since that would make it politically more feasible for the Pentagon to restart its own testing. And of course North Korea's nuclear ambitions provide the latest excuse trotted out by the administration for expansion of the Strategic Defense Initiative, aka the "Star Wars" program. "They think they are going to bomb [their] way out of proliferation," Slater comments sardonically.

In 1970, faced with the prospect of dozens of new nuclear states, almost everyone in the world greeted the Nuclear Nonproliferation Treaty with relief. The only nonsignatories were Israel, India and Pakistan, for reasons that are now all too apparent. With an original term of 25 years, the treaty was basically a deal among the five "public" nuclear powers -- Britain, China, France, Russia and the United States -- that they would move toward eventual nuclear disarmament in return for the nonnuclear powers staying that way. The nuclear powers also agreed to assist the others in the development of "peaceful" nuclear technology.

When the treaty was expiring in 1995, the Clinton administration tried to extend it indefinitely, without qualifications, but other countries had already become suspicious of the sincerity of the nuclear powers, and in particular of Bill Clinton's inability to restrain the Pentagon's fixation on nuclear weaponry. The nonnuclear powers therefore exacted a price for extending the treaty, part of which was a review every five years of how it was working.

Both in 1995 and in 2000, when the first review occurred, the United States joined in a unanimous agreement that included a pledge by all nuclear powers to reduce existing nuclear weapons and to refrain from working on new ones. It also supported a nuclear-free zone in the Middle East. In this year's review, however, the United States refused even to allow those previous commitments onto the agenda and made it clear that the Bush administration had now "unsupported" them. It now regards these as "historic," opening the way for other signatories to regard the treaty itself as historic and defunct, since they agreed to extend its 25-year life in return for those commitments.

Specifically, the U.S. delegation refused to allow any discussion of Israel's nuclear weapons or of the failure of the nuclear states to meet their obligations under the treaty. Instead, the delegation wanted to concentrate on Iran, which, with some justice, claims that its present activities are permitted under the treaty, and North Korea, which had dropped out of the treaty -- perhaps following the example of Bolton's "unsigning" of the International Criminal Court treaty.

Unfortunately for the administration, the news about its plans to weaponize space -- also a violation of existing treaties -- broke in the middle of the conference. Adding to the undiplomatic signals it is sending the rest of the world, the administration has refused to send the Comprehensive Test Ban Treaty to the Senate for ratification, has earmarked billions in preparations for resumed nuclear testing, and has budgeted funds for research on new "bunker-busting" nuclear weapons while continuing to conduct computer simulations of new weapons.

The United States of course has long been complicit in Israel's and, to a lesser extent, India's and Pakistan's becoming nuclear powers. Its reaction to their successful programs has been to try to sell them more conventional weapons, such as planes that can deliver the bombs, and to court them diplomatically.

And while the United States pressures Pakistan to "render" motley Islamists for incarceration, it has failed even to interview Abdul Qadeer Khan, the "father of the Pakistani bomb," who has spent the past several decades hawking do-it-yourself A-bomb kits around the world in a fashion that makes the al-Qaida threat seem jejune. In convenient amnesia, the Bush administration even seems to have forgotten that his work was originally touted as the "Islamic bomb."

Nor did it help the administration's posture that while delegates were considering the Nuclear Nonproliferation Treaty in New York, the American Israel Public Affairs Committee's annual convention in Washington was featuring a sort of ghost train touch-and-see exhibit on Iran's potential for developing nuclear weapons. In contrast, Israel's estimated nuclear arsenal of more than 200 weapons has gone completely unremarked by anyone in Washington.

The treaty clearly has some holes that need patching, but the Bush administration is ripping off the existing patches, not cooperating in creating new ones. The developments in North Korea highlighted one major flaw. A country can (and indeed did) use the cover of the treaty to build "peaceful" reactors with foreign help and then withdraw from the treaty, as Iran is also threatening to do. The problem is, if you build a nuclear-powered reactor, your byproduct is the fixings for a fission bomb.

Among the patches that the conference could, and probably would, have considered if the majority of countries had had their way are the addition of a no-exit clause and better enforcement and inspection. Some have suggested that a complete ban on enriching uranium may be in order, since there are no serious peaceful purposes for it, but in some ways that would be rendered nugatory by the trade in plutonium that some reactors produce as a byproduct.

Under the circumstances, it is perhaps surprising that more countries have not followed the nuclear path. In an otherwise gloomy outlook, the one bright spot of the conference review is that so many signatories so sincerely want it to succeed -- even though the country that blusters most about nonproliferation sabotaged the conference so successfully.

All in all, it was a fitting curtain raiser for Bolton's likely new job, since his publicly stated peculiar views on international law, and his previous job performance as head of the State Department's disarmament affairs desk, are in large measure responsible for driving the North Koreans to nuclear weapons and for getting the Iranians to think wistfully about them. As the old curse has it, we face interesting times, certainly more so than in any period since the fall of the Berlin Wall.