Desperate to turn the "Good Morning America" vs. "Today" ratings battle into a catfight, the press has all but ripped Katie Couric and Diane Sawyer's dresses off and tossed them in a swimming pool. How tedious. 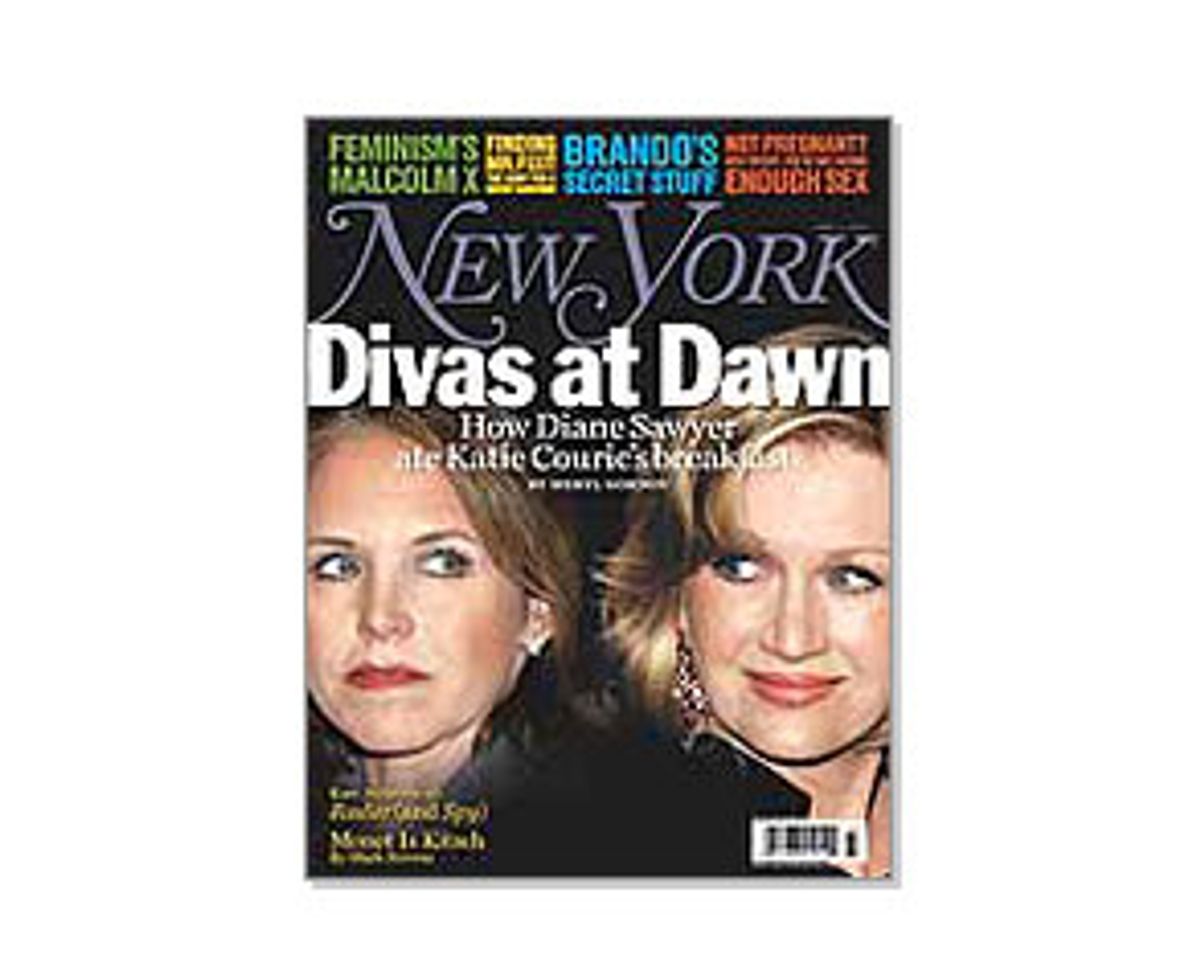 Female-on-female combat is in fact so tantalizing, so satisfying, so fetishized by the American public, that we literally cannot get enough of it. When we're not filled up after an episode of "Desperate Housewives," we gobble magazine stories about how the "Desperate" actresses yell at each other at photo shoots. When we are bored because it's been too long since we fantasized about a Hillary Clinton-Condoleezza Rice presidential cage match in 2008, we perk ourselves up by imaginatively pitting Clinton against former librarian and unlikely presidential candidate Laura Bush. And when we want to write a story about a media rivalry between two massively financed morning television institutions like "Today" and "Good Morning America," we make the story tastier by serving up a tale of hand-to-hand combat between Diane Sawyer and Katie Couric.

Painting powerful women as long-nailed, sharp-toothed competitors -- which, incidentally, they sometimes are, just like their male peers -- is a digestible way of dealing with them. We can marginalize them as shrieky playground girls, thereby turning them from real-life professionals into familiar and unthreatening caricatures of femininity.

Despite the recent earth-shattering revelations of New York Times columnist John Tierney claiming that women don't have the same stomach for competition -- icky! -- as men do, you'd never know it from the still rolling avalanche of coverage of the reported battle between "Today" show co-host Katie Couric and "Good Morning America" co-host Diane Sawyer. Last week came a cover package in the New York Observer; this week it's New York magazine; coming soon is Ken Auletta's take on the tale in the New Yorker. This particular season of diva-baiting has been pegged to May sweeps numbers that show "GMA" making major ratings gains on decade-long champ "Today." But it was really kick-started by last month's New York Times piece by Alessandra Stanley in which, without any indication that she had spoken to sources at "Today," Stanley claimed that staffers "dart behind doors and douse the lights" at the sound of Couric's "clickety stiletto heels" coming down the hall. Her thesis was that "GMA" is gaining ground on "Today" solely because viewers prefer Sawyer -- whom Stanley described as oozing "creamy insincerity" -- to Couric.

The notion that consumers would choose their morning show based simply on which female co-host -- according to Stanley's dim view of both women -- they disliked least is amplified by the cover of this week's New York, which blares: "Divas at Dawn: How Diane Sawyer Ate Katie Couric's Breakfast." The cover bears an image of a frighteningly mascaraed Couric, looking snippily over her shoulder at a glamorous Sawyer, who wears a shit-eating feline grin. The women might as well be slathered in mud, wearing Krystle and Alexis name tags, the "Dynasty" theme playing in the background.

It's a terrific cover.

But the thing is, it's a manipulation -- a manipulated image and a manipulated story. Couric and Sawyer may or may not be "divas." Their shows are, and have always been, engaged in a tense ratings duel. But to pretend that the rivalry comes down to a girl-war, to personal hair-pulling over every viewer lost and gained, is a convenient fantasy.

There are a lot of factors that go into the wars between "Today" and "GMA." Like the fact that ABC has hit prime-time shows -- there's "Desperate Housewives" again -- that draw viewers in the morning. A more reserved piece about "GMA's" gains in the Times on Monday reported that the day after the "Desperate" season finale, "GMA" had 600,000 more viewers than "Today," but lost the next morning by more than 800,000. The Times also reported that "GMA" has a crack talent booker who has scored them Mariah Carey and U2, appearances that are sure to draw audiences.

In New York, reporter Meryl Gordon admits that "the remarkable turnaround is about more than a popularity contest between Sawyer and Couric" and that "the current revival of Good Morning America is a result not just of the popularity of Sawyer and Gibson and ABC's prime-time success, but of years of tinkering." She quotes television analyst Andrew Tyndall, who claims that morning television dominance usually runs in eight- to 10-year cycles. "Today" has been number one for almost a decade, putting it awfully close to its natural expiration date. And yet, somehow, all of these factors get boiled down to "Divas at Dawn."

Gordon writes, "If Today or GMA were to cover the story, they'd be virtually bound by the dictates of morning-TV-speak to call it a catfight, a characterization they both, of course, would resist." Here is the acknowledgment that there is something cheap and exploitative about terming this kind of rivalry a catfight. And here also is the moment at which New York does it anyway. "Regardless," writes Gordon, "right now, Diane & Co. are drawing almost all of the blood."

Part of the problem with much of the coverage of this story is that ABC has so far proved more willing to grant press access to reporters, while NBC remains mum. This leaves Gordon with all kinds of glowing material from one side -- Sawyer playfully sticking out her tongue and tripping gaily down the ABC steps in stiletto heels (apparently not "clickety") -- while the only NBC people free to talk are the grumps who vent their spleen anonymously. Gordon only has the material she's given; it's unrealistic to expect a reporter to make-up the losses for a side that refuses to play ball.

And so it makes sense that part of Gordon's argument -- like others before her -- is ABC's redemptive story of Sawyer's supposed personality refurbishment. Implicit in this version of the tale is the notion that Couric's perceived loss of ground to Sawyer is all the more devastating because Sawyer has traditionally been seen as an icy brainiac whose turns as beauty queen, Nixon press aide, and wife of Mike Nichols have made her remote. That she should be personally beating perky Couric is a testament to how far Couric has fallen. Trouble is, Diane Sawyer hasn't exactly been a leper all these years. In America, being rich and hot and married to a famous director don't usually add up to getting picked last for television's kickball team. Sure, she's always had a different energy from Couric -- women on television are not all identical fem-bots -- but if she'd really been that frosty, Sawyer would not have been asked to host a morning show to begin with.

To write about Sawyer's thawing image is to celebrate her for having come down to some more acceptably feminine level, to note, as the "New York" story does, that she is "discreet about her salary" while Couric supposedly brays about her $65 million 2002 contract negotiations. (For the record, Couric famously shies away from the topic of money in interviews.) Tawny Wellesley grad Sawyer is a big hit, we're told, because she is now eager to host segments about fried Twinkies. But an unnamed "Today" source tells Gordon that Couric is unappealing because she pretends on-air to think $100 is too much to pay for a skirt when we all know how rich she is. The arguments here don't track; the fact is that both women are hyper-groomed bazillionaire New Yorkers, both are paid to appeal to Nebraskans, and both experience the friction of that uncomfortable bind.

Gordon's piece does contain fun dish: a new version of Couric's role in the firing of "Today" producer Tom Touchet; word that she arrives unprepared for work. Sawyer keeps a weekly date with her husband and maintains a sleep schedule better suited to a planet that orbits the sun less frequently than earth. These are fascinating women and there's lots to write about them: how much money they make, how they deal with male power, even -- maybe fairly, maybe not -- how they treat their staff, their assistants, the janitors. But the most direct conflict anyone can muster about how they feel about each other is Sawyer's professional and gracious statement to Gordon that Couric "is so talented. Matt is equally wonderful. We're just different." It's less of a meow than a purr.

Couric and Sawyer are professional rivals, who may loathe or respect each other, but go to work each day, as many of us do, for companies that are in business competition. None of the stories I've read about them have mentioned that Couric, currently the highest paid journalist on television, is about to begin a new round of contract negotiations and that NBC might have some investment in seeing her devalued in the press. Even when acknowledging that each franchise has scores of producers who rework segments and formats, the "New York" story nudges readers to ignore the men behind the curtain and concentrate instead on the image that's been created -- literally, with PhotoShop -- of two women staring daggers at one another.

Stories about male power rivalries have abounded since time began, but often in contexts where there were no attractive women to focus on instead (like, for example, for most of business history). When we have the option of zeroing in on glossy Sawyer and feisty Couric, who wants to read about ABC chief David Westin and NBC head Jeff Zucker duking it out with Blackberries and ratings spreadsheets? Stories about ex-"Today" producers Jonathan Wald and Tom Touchet or "GMA" producer Ben Sherwood's temper tantrums aren't likely to sell too many magazines, though former "GMA" producer Shelley Ross's outbursts generated plenty of ink. No one even wants to write about Matt Lauer vs. Charles Gibson. What would the headlines be? Showdown of the Stoics? War of the Whipped? The Battle of the Balding?

It doesn't matter how you spin it, really. Nothing sells like girl-on-girl action.