Would it kill you to smile?

The lost souls of HBO's "Six Feet Under" are back for a fifth and final season, as stubborn and repressed and sadly human as ever. 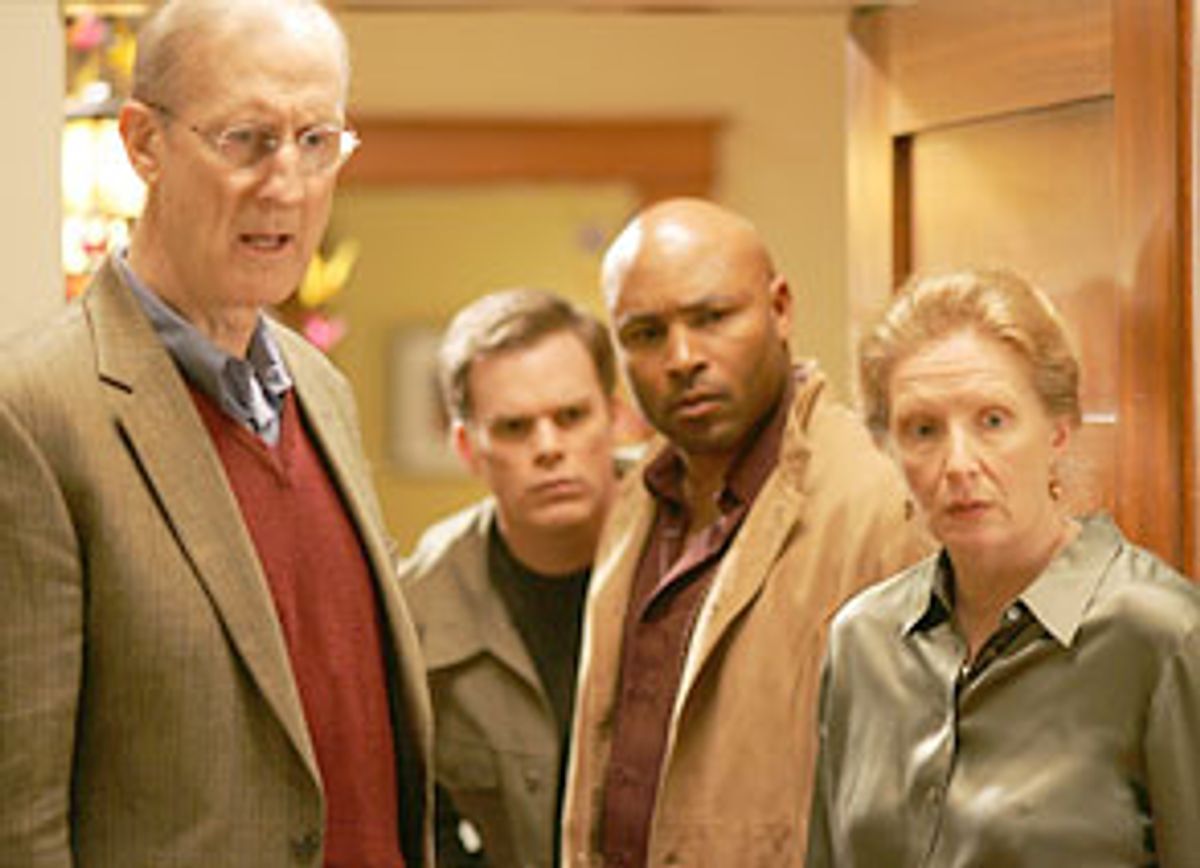 "Life is really fucking lonely," Nate blurts out at his 40th birthday gathering, but his pity party is interrupted when guests yell for him from the kitchen. A bird flew in a window and is eating off the kitchen table. It's the same bird that made a few surprise appearances earlier in the night. The first time, everyone agreed to leave it alone, hoping that it would fly out on its own. Each time the bird left, though, it would fly back in through another window in the house.

This time, Nate has had enough. Drunken and angry, he chases the bird around the kitchen with a broom as his shocked guests look on in horror.

If some scenes from the fifth and final season of "Six Feet Under" feel like a lesson in the use of symbolic imagery in short fiction, that makes sense, since the show has always had more in common with literature than it has with most other TV dramas. Just like Raymond Carver or John Updike, creator Alan Ball returns to the missed connections and melancholy of domestic life, dragging sad, unforgettable images into the frame so that the focus rests on what's missing: what the characters aren't saying, what they don't have, what they long for no matter how their circumstances change.

Like many of Carver's or Updike's lead characters, it's impossible to know what Nate Fisher (Peter Krause) wants or even needs. He's finally free from the ghost of Lisa (Lili Taylor), his awful passive-aggressive wife, who we learned at the end of the last season was murdered by her sister's husband after a long-term affair. He's marrying Brenda (Rachel Griffiths), who has straightened out her life and has proved to be a good parent to Maya, Nate's daughter with Lisa. Over a beer with a creepy classmate from high school, Nate claims to feel happy and grateful for all of the good things in his life -- which is, of course, our cue to start worrying about him. Typically, when Nate starts sounding smug, that's when everything begins to fall apart.

So what's he repressing this time? What's eating him alive, underneath that disimpassioned grimace? Before we can find out more, his dead father shows up to grumble about how Nate's entire life is just an ongoing pattern of pretending to feel things. Suddenly Nate snaps into reactive mode, dredging up scathing words for Brenda, open hostility for innocent bystanders, and a continued fascination with anyone tragic or just out of reach or both. Nate's most intimate moments, as usual, are with the dead, the half-dead, and the doomed. By the end of his lovely dance of anger with the bird, we're about ready to chase Nate out of our kitchens once and for all.

Nate's little sister Claire (Lauren Ambrose), who was always a wide-eyed if slightly misguided breath of fresh air in the family, seems to lose wisdom instead of gain it as she gets older. After her successful gallery show, she dropped out of school to focus on her photography full time, claiming that she's learning more now than when she was at school, "that pretentious art barn." Sounds like a wise enough move, right? Did I mention she's also living with Billy (Jeremy Sisto), Brenda's cr-cr-crazy little brother -- you know, he of violent outbursts, incestuous obsessions and generally odd behavior? Sure, Billy seems as placid and satisfied as a college professor, but it's even harder to trust his uneasy peace than it is Nate's.

David (Michael C. Hall) and Keith (Mathew St. Patrick) are more stable and happy than ever, which is why it's time to take on more onerous challenges, most notably the procurement of a child to call their own. Keith favors the notion of a surrogate mother (you really can't help but cringe at the thought of such a plot in the hands of the "Six Feet Under" writers), while David favors adoption, and both are trying to go along with each other's plans while sabotaging them in private. Aside from such sneakiness, though, David and Keith have always been the best couple on the show; unlike the others, they've matured and developed guiding principles of how to treat each other and themselves. Regardless of what hideous turn the surrogate-mother story will take, at least we know these two will stand by each other to the end.

Ruth and George are another story. Nate's mother Ruth (Frances Conroy) has always been a symbol of stability and optimism, which is probably why she's landed in her own personal hell. Taking care of cr-cr-crazy George (James Cromwell) has proved to be more work than she bargained for, yet she's too fenced in by her own values to abandon him. Even though she blames him for tricking her into marrying her by not disclosing his mental illness, even though she looks more unhappy than she ever has, she remains determined to suffer by his side. George, though, is more pitiful than ever. "I am so lucky. I hate that I'm the lucky one," he tells Ruth in one heartbreaking scene, referring to his many ex-wives. "No one is ever lucky to have me."

But at least George is finally facing his demons. Ruth just keeps lashing out and smashing everything to little bits, then picking up the pieces and gluing them back together without rhyme or reason into an unrecognizable mess. One night after an outburst in front of George and his daughter, Ruth rises to go to bed, then whispers in her typical restrained fashion: "Does everyone have everything they need?" George and his daughter sigh heavily and look up at her, their eyes telling her that no, everyone does not have anything they need. "Yes," George finally answers dutifully.

This is the trap set by most literary versions of despair, whether laid out in stories by Lorrie Moore and Jhumpa Lahiri, or hiding in the lyrics of the latest downwardly spiraling Fiona Apple song. Just as everything seems to be going fine, the same neurotic or self-destructive thoughts push stubbornly into the characters' consciousness, and tell them that nothing adds up, that the comforts of love are an illusion, that no matter what transpires, they are and always will be completely and utterly alone. And when things do fall apart? A voice in their heads tells them it's their fault: "See? You'll never be able to live a normal, happy life. Who are you trying to kid?" On the surface, though, the crestfallen are reduced to uttering empty niceties.

We all know how that feels. But still, there's a point where we, as an audience, slide effortlessly from having empathy for such characters to having an indescribable urge to kick their asses. Instead of relating, or rifling through our own sad memories to look for points of comparison -- that time we broke down and screamed at our mother like a little kid, those years we committed ourselves to someone who was nearly impossible to live with -- our heads start swimming with old-fashioned recriminations like relics from the '50s: "Would it kill you to smile, Nate?" "Claire, if you can't say something nice, don't say it at all!" "Jesus, David, could you look on the bright side for once?" "Get off your pity potty, George!" "Billy, shut up and take your medicine!" "Rico! Sit up straight and stop mooning over that foolish girl!"

This is why some once-loyal fans of the show have grown frustrated with it, as documented in many "Six Feet Under" forums. Why can't Nate just relax and enjoy his life for once, instead of looking for what's not there? What in the world is Ruth doing, torturing herself by trying to take care of a guy who has never been able to take care of himself? Why can't Claire resist the allure of insanity and build a normal life outside the snare of pretentious, melodramatic egomaniacs?

Still, there are lighter moments -- David, Claire and Nate sneak outside to get high, but don't want their significant others to know; David and Keith drive around with some disturbingly precocious kids who grill them on their sex life. If these characters weren't so knowable and sharp and likable, we might not find their continued insistence on bottling it all up and relying on evasive maneuvers quite so aggravating.

Of course, the very traits that drive us nuts are also what make these characters a lot like the friends, family, and co-workers we deal with every day. No matter what happy sounds they make, their lives can be strange and unpredictable and often sad. The characters of "Six Feet Under" bring to light some deeply disturbing constants in life: that some people will always remain alienated and misguided, that others will always wrestle with addiction or mental illness, that events sometimes occur that we have no control over.

Like the bird that keeps flying back into the house, making all its inhabitants restless and uneasy, there are plenty of struggles that resist simple solutions. Everyone reacts to this bit of helplessness differently: Claire says something snide, David covers his eyes, and Nate swings his broom in a fit of rage. Meanwhile, we viewers at home cringe and will them to leave the damn bird alone already. But the queasy joy of "Six Feet Under" is that it shakes us from the safety of our most comforting beliefs and dearly held notions that everything happens exactly as it should.