Blast from the past

Dodgeball nearly ruined my life 25 years ago, so when my kids came home raving about it, I flipped. But then I realized: Their childhood is theirs, not mine. 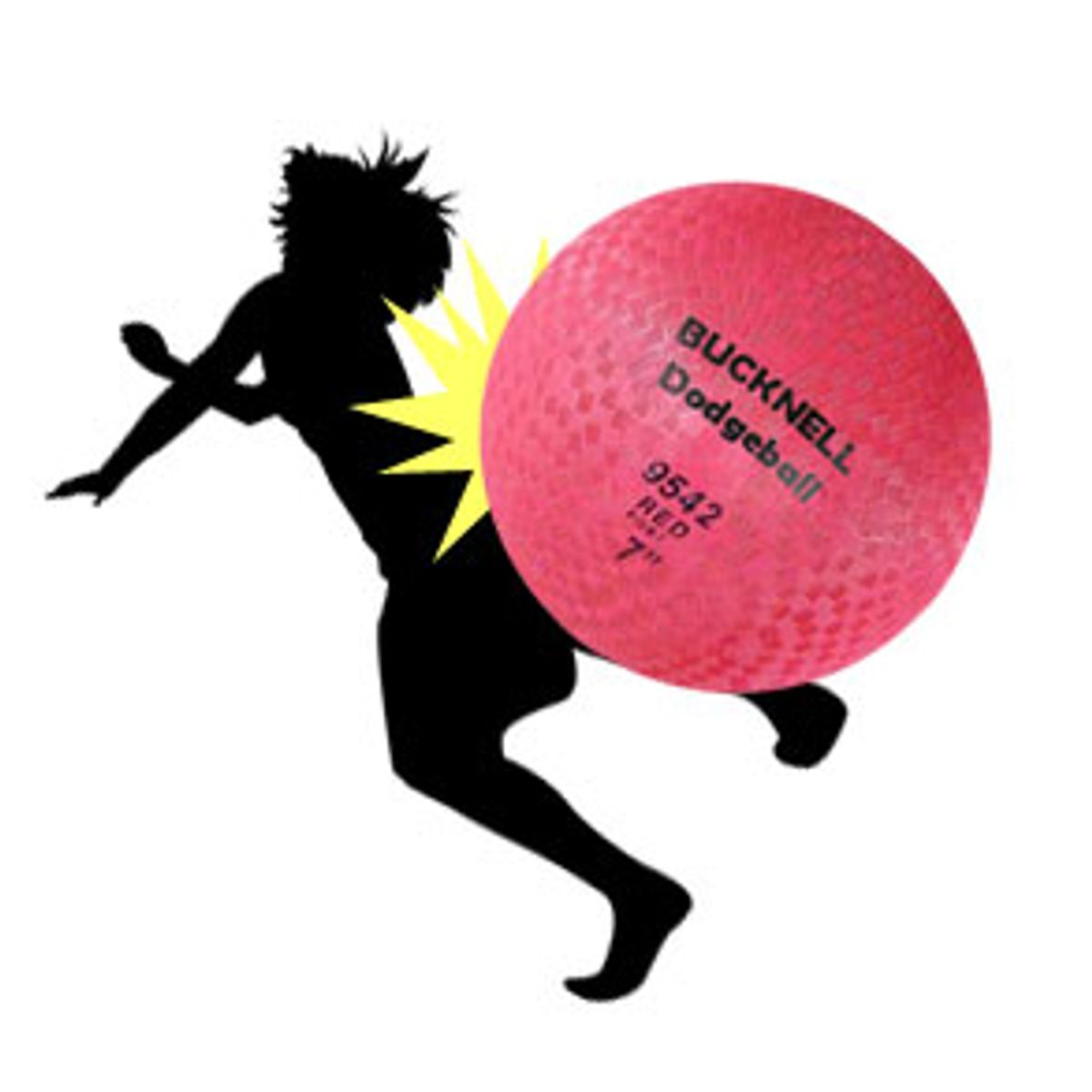 A couple of months ago, my two oldest kids came home from school abuzz over the new game they'd learned in gym class. I'd never heard them express any kind of excitement about P.E. before -- they are not natural athletes -- but there they were strategizing and recounting the high points of their respective matches with unprecedented zeal. I tried to follow the discussion, but it was making little sense to me. My one foray into organized sports was a single spring on the Brookwell Cleaners Softball Team in 6th grade. I remember very little about the season other than the ache in my shoulder from holding my hand above my head in a futile attempt to distract the gnats from my face, the sound of my own teammates' jeers as I made my regular strikeout, and the euphoria of being allowed to take the bench whenever our team had the slightest chance of winning.

The game my kids were so agog over wasn't softball, though. It wasn't even foursquare, a game they'd once tried to explain to me without much success. Finally, I asked them what they were talking about.

Dodgeball? My children were playing dodgeball? That cruel, brutal, violent schoolyard game so mercilessly satirized in the 2004 film with Ben Stiller? The game, more important, that exemplified everything that was wrong with my childhood in suburban New Jersey, a short, pasty-faced Jewish girl in a town full of scrubbed, blond, athletic WASPs, their long tanned limbs toned from years of tennis lessons and country club swim teams? Dodgeball? Over my dead body.

I know it's fashionable to claim to have been a nerd as a child, to insist on having scrabbled to hold on to the lowest tier of the social ladder, to recount years of torture at the hands of the golden and anointed. Trust me, I know just how trite my history of exclusion is. I know that when compared to a lifetime of true deprivation and abuse, suburban misery counts for little. Nonetheless, as someone who still, at 40, gets a clutch of nausea every time she drives by George Washington Junior High School, I am just not willing to let go of the reins of this particular hobbyhorse. I am convinced that my entire personality was formed in those long tile hallways where I was a victim of that most banal of childhood torments -- ostracism. Everything can be explained by, every torque and twist in my character can be attributed to, those grim, lonely years. Neither the jocks, nor the heads, not even the brains wanted any part of me. The other kids didn't talk to me, or even look at me, and if it weren't for the series of successively more hostile prank phone calls that I received, I could have happily deluded myself into thinking that none of them knew I existed.

Gym class, however, was where they allowed themselves to express their disdain. In gym class for some reason they were allowed to heap derision on the apraxic kids. ("No batter, no batter. Easy out.") Gym class was, of course, where the strongest, best-looking kids were made captains and chose us spazzes last. More important, it was where the figures of supposed authority allowed them to do so. Forget the work our parents did molding our minds and values. Everything fell apart as soon as we put on those maroon polyester gym suits.

And dodgeball. God, dodgeball. As my own children were planning their tactics, evaluating which kids would be easily taken out by a hail of red balls (considerations included general athletic ability, low vs. high center of gravity, established cowardice in the face of hard throws) I was rocketed back to those dreaded days on the blacktop at G.W. Jr. High. I remember quaking under the gaze of a huge, blond girl who even then I knew was destined to remember eighth grade as the apogee of her life. She smiles, heaves back her strong arm, and wails the ball. Before it even begins its arc through the air I'm on the ground, quivering, arms over my head, already crying even though I haven't been hit yet.

My children stared at me, mouths agape.

"What are you talking about?" my 10-year-old daughter said.

"You can't play dodgeball. It's cruel."

The children looked at each other and then at me. Clearly, the more barbaric aspects of the game had not even penetrated their consciousness.

"Mom," my daughter said. "Please, Mom. Do not call our gym teacher. Please."

But it was too late. I was already marshaling my facts. The National Association for Sport & Physical Education has issued a position paper on dodgeball, and they don't like it any more than I do. Dodgeball is not an appropriate activity for K-12 school physical education programs, says the NASPE. A game that targets and eliminates weaker kids does not help them develop confidence. While it may allow for the practice of some physical skills, there are many other activities that do this better, without using human targets. Furthermore, the only children who like dodgeball are the children who don't get hit, who don't get eliminated, who don't get wailed on. Like, for some reason, my children.

I prepared for my conversation with my children's gym teacher by learning by heart the following statement from the NASPE. "It is not appropriate to teach our children that you win by hurting others." Then I made the call. My children go to a remarkable school where community service is an actual part of the curriculum. It made no sense for dodgeball to exist there. This is a school where conflict resolution is taken so seriously that when some neighborhood toughs threw eggs at the fourth graders, the head of the lower school brought them in for a mediated encounter session. This is a school that takes very seriously the theories of Vivian Gussin Paley, author of the marvelous book on childhood social ostracism "You Can't Say You Can't Play." I chose this school precisely because it is the polar opposite of G.W. Jr. High. The gym teacher and the head of the lower school called me back, not a little confused, especially when I explained that, while my children were enjoying themselves tremendously playing dodgeball, and that I didn't actually know of any kids who weren't, I still thought they should ban the game.

It was only while I was earnestly describing to the head of the lower school how detrimental dodgeball was to our children's developing bodies and minds, through the prism, I might add, of my experience huddling with my hands over my 11-year-old head while dozens of balls rained down on me, that I realized that what I was really trying to do was exorcise the ghosts of my own unhappy childhood. I was stirring up trouble at my children's school because 25 years ago I was miserable, and I had decided dodgeball was the very matrix of that misery, in which all the lines of force that were conspiring to crush my spirit were laid bare.

The thing is, my fantasies about being a parent always involved fighting for my unpopular child, doing for her what my own parents couldn't do for me when I was a girl. I am so ready to be that little girl's mother. I know just how to provide the proper sympathy, exactly what to say when the boys call out, "Hey, carpenter's dream!" (flat as a board, and easy to screw), or when you find a page in a slam book dedicated to you. My mother, as supportive and loving as she is, was always left somewhat befuddled and at a loss by my sufferings. "But I always had so many friends when I was a girl!" she used to say. Now that it's my turn to be the mom, maybe I overcompensate. I regale my children with tales of how I used to eat my lunch huddled over a book in a corner of the school library because no one would let me sit at their lunch table. I comfort them with stories about geeks and nerds who went on to conquer the world.

There's only one problem. My children are nothing like me, and they can never quite figure out why I'm laying it on so thick. They aren't living out my childhood, they're living their own. Whatever problems they might have, and they've got plenty, they're not the same ones I had. Sure, they feel sorry for me, or the me that I once was, but they don't really get it. My oldest daughter is supremely confident, secure in her position in her class and with her friends. She's always been popular. She was the queen bee of Gymboree. My son doesn't have her social ease, but neither does he have quite my awkwardness.

And he loves dodgeball.

Halfway through the dodgeball wars, I dropped the ball. On purpose. Whatever I think of the pedagogical value of the game, the fact is my children are happy. They like school, they like gym class. What they don't like is their mother working out her adolescent traumas by berating their gym teacher.

There are times as a parent when you realize that your job is not to be the parent you always imagined you'd be, the parent you always wished you had. Your job is to be the parent your child needs, given the particulars of his or her own life and nature. It's hard to separate your remembered childhood and its emotional legacy from the childhoods that are being lived out in your house, by your children. If you're lucky, your kids will help you make that distinction. They'll look at you, stricken, and beg you not to harangue the coach, not to harass the mother of the boy who didn't invite them to the birthday party, not to intervene to rescind the lousy trade of Yu-Gi-Oh cards they made. You want to protect them, but sometimes what you have to protect them from is the ongoing avalanche of your own childhood -- crashing down on you like a hail of dodgeballs.