In this smart and stylish debut, an unnamed heroine guides us through her personal history of love, one man at a time, as she searches for true happiness. 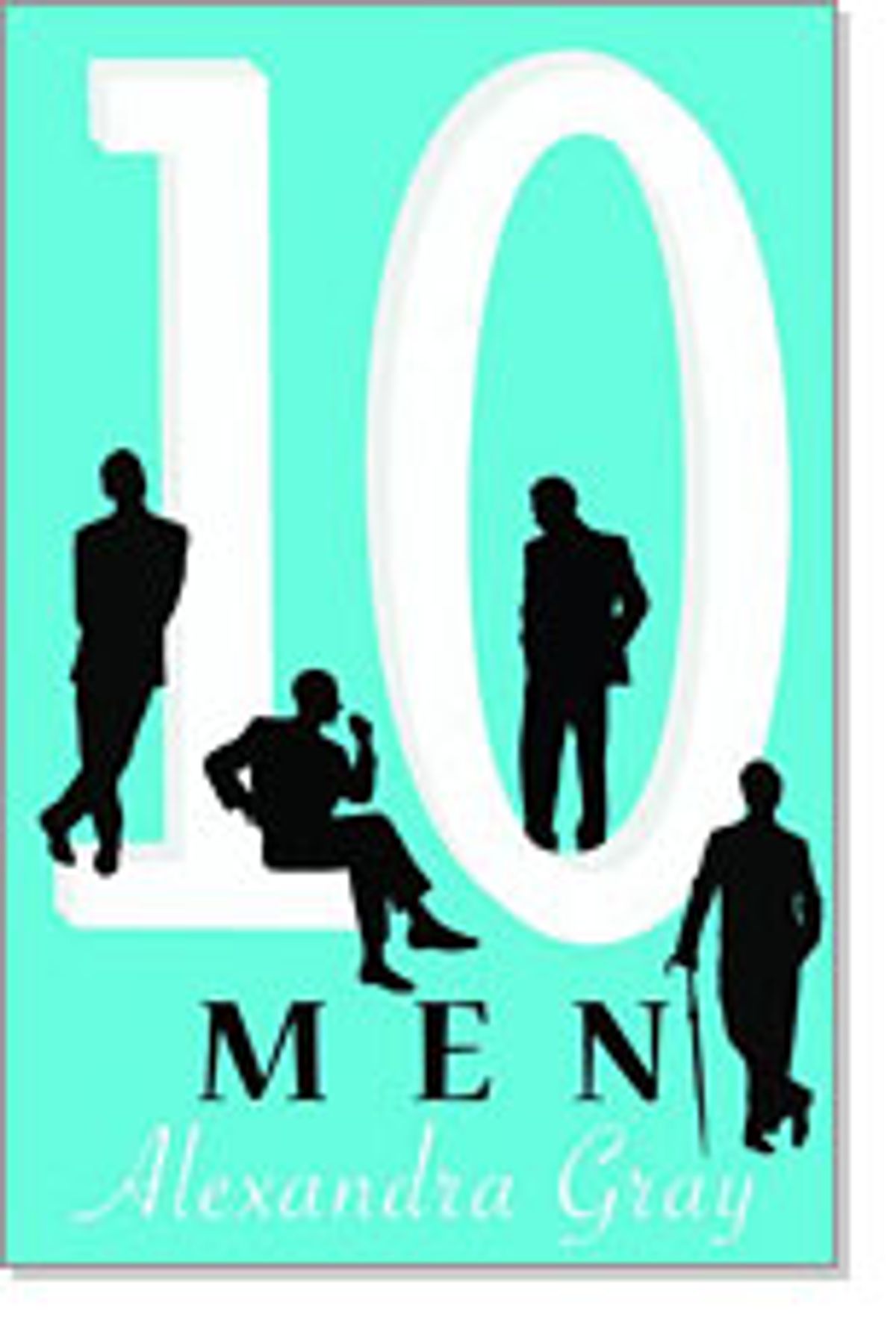 A little advice for women still in mourning over the end of "Sex and the City": Pick up Alexandra Gray's debut novel, "10 Men." The book's unnamed heroine -- who takes us through the romantic relationships of her early adulthood -- is like a British Carrie Bradshaw, slumming it with a poet one moment, flying high with a Mr. Big-style billionaire the next. And just as "Sex and the City" stood out among its television peers for its wit and style, Gray's book is remarkable in the vast sea of "chick lit" for its smarts, flair and honesty. Where so many novels about dating and relationships are just "Bridget Jones" knockoffs, with a goofy and fumbling narrator who goes from lucky to unlucky in 60 seconds, Gray has given us a thoughtful character who moves through the world with poise and grace -- but not so much of either that we can't relate to her.

When we first meet our heroine, she's a grown woman in her 30s about to deflower a virgin of about the same age; hence his taxonomic name in the world of our narrator, the "Virgin." But as soon as the arc of that relationship is unfurled, we're taken back in time. "10 Men" really begins with the narrator's first romantic relationship as a 19-year-old -- the one that sets her Carrie-ish course from man to man to man in motion. That first love was with the "Schoolmaster" -- a 32-year-old athletics coach at a boy's boarding school off the coast of France -- who wooed her from afar and convinced her to marry him and move to the remote school.

Our heroine married for love, sure. But also because she wanted to have sex, which, to her at the time, was inextricably linked to lifetime partnership. (Although she eventually sheds nearly every trace of her convent school/protective single mother upbringing, she was quite the prude for most of her youth.) Unsurprisingly, a tiny island filled with teenage boys proves too much for her to take at such a young age, especially with a crotchety and distracted man like the Schoolmaster. (Her presence, apparently, was also a bit too much for the boys, who get busted performing group masturbation while describing their fantasies about her.) She develops a crush on a senior, tries to avoid him, and begins to dream of leaving the island.

To get out, our heroine does the only thing she can think of: hitch her wagon to a new relationship. She's been working as a typist, and then as a translator, at a local legal firm. Her chosen man, the "Lawyer," is easily had, even though he is married. They travel, she translates; they have mediocre sex. When his wife eventually discovers their affair, it's over, but the Schoolmaster's wife still gets her wish. To assuage his guilt over ending things, the Lawyer sends her off the island with a decent company car and an envelope full of money, paid as restitution for her sort-of-broken heart.

From the island, we go to London, where our heroine carries on with two men at once -- the "Lord" and the "Lover." And later there's the "Billionaire," who begins as her boss and, ultimately, replaces the other two. He is "10 Men's" Mr. Big -- passionate and aloof and rich and handsome -- and every bit as much of a nightmare. With him there are travels to islands, to Paris, to America; there are unlimited credit cards and gowns and meals. Eventually, there is also abandonment, and sadness; finally, a move back to England, and the Virgin.

Like "Sex and the City," "10 Men" is a sort of celebration of singlehood; at the end of the novel, our heroine is an unmarried actress, still trawling the waters. And she's pretty happy, too. "10 Men" isn't a "You go, girl!" kind of book, but that's what makes it so good. The narrator isn't a heartbreaker, nor is she a sad sack; she's a woman in search of something. She's intelligent, but unsure of who she is, or what she should be. She tries on different jobs like outfits; some fit, and others don't. Somewhere, in our heroine, is a little bit of each of us. And somewhere, in all the men she loved, is one we'll recognize. "10 Men" is a little too real-life to be a totally guilty, fantasy-filled summer pleasure -- but isn't a genuine one even better?