What Deep Throat was up to

Mark Felt fought a covert battle against Nixon's plan to create an imperial presidency. But could he have prevailed against George W. Bush, who has created a kingdom beyond even Nixon's dreams? 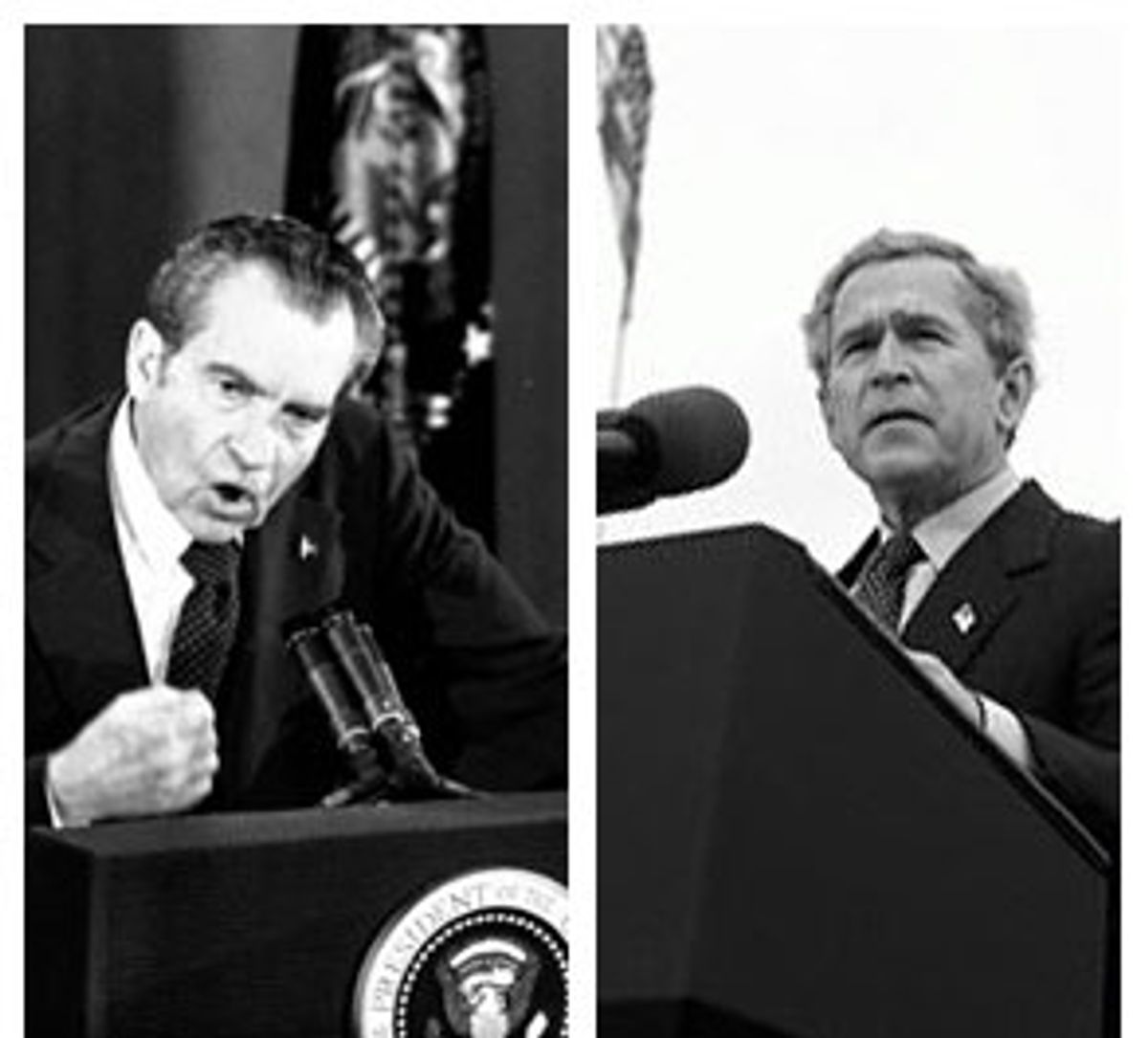 The unveiling of the identity of Deep Throat -- Mark Felt, the former deputy director of the FBI -- seemed to affirm the story of Watergate as the triumph of the lone journalist supported from the shadows by a magically appearing secret source. Shazam! The outlines of the fuller story we now know, thanks not only to Felt's self-unmasking but to the disclosure published in an upstate New York newspaper, the Albany Times Union, and unreported so far by any major outlet.

During Watergate, Felt was not working as "a disgruntled maverick, as some have suggested, but rather as the leader of a clandestine group" of three other high-level agents to steer and control the story by collecting intelligence and leaking it. For more than 30 years the secrecy surrounding Deep Throat diverted attention to who Deep Throat was rather than what Deep Throat was -- an FBI covert operation in which Washington Post reporter Bob Woodward was almost certainly an unwitting asset.

When J. Edgar Hoover, the feared director of the FBI, died on May 2, 1972, Felt, who believed he should be his replacement, was passed over. The Watergate break-in took place a month later. As President Nixon sought to coerce the CIA and FBI to participate in his increasingly frantic efforts to obstruct justice, Felt, who had access to raw intelligence files, organized a band of his most trusted lieutenants and began strategic leaking. The Felt operation, in fact, was part of a widespread revolt of professionals throughout the federal government against Nixon's threats to their bureaucratic integrity.

Nixon's grand plan was to concentrate executive power in an imperial presidency, politicize the bureaucracy and crush its independence, and invoke national security to wage partisan warfare. He intended to "reconstitute the Republican Party," staging a "purge" to foster "a new majority," as his aide William Safire wrote in his memoir. Nixon himself forthrightly declared in his own memoir that to achieve his ends the "institutions" of government had to be "reformed, replaced, or circumvented. In my second term I was prepared to adopt whichever of these three methods -- or whichever combination of them -- was necessary."

But now George W. Bush is building a leviathan beyond Nixon's imagining. The Bush imperial presidency is the highest stage of Nixonism. The commander in chief has declared himself by executive order above international law, the CIA is being purged, the Justice Department is deploying its resources to break down the wall of separation between church and state, the Environmental Protection Agency has been ordered to suppress scientific studies, and the Pentagon has subsumed intelligence and diplomacy, leaving the United States with blunt military force as its chief foreign policy.

The three main architects of Bush's imperial presidency gained their formative experience amid Nixon's downfall. Donald Rumsfeld, Nixon's counselor, and Rumsfeld's deputy, Dick Cheney, one after the other, served as chief of staff to Nixon's successor, Gerald Ford, both opposing congressional efforts for more transparency in the executive.

With perfect Nixonian pitch, Cheney remarked in 1976, "Principle is OK up to a certain point, but principle doesn't do any good if you lose." During the Iran-Contra scandal -- when members of the Reagan administration formed an offshore, free-standing, unaccountable enterprise that sold missiles to Iran and deposited funds in Swiss banks in order to finance the Contras' war in Nicaragua -- Rep. Cheney, a Republican leader in the House, argued that the congressional report criticizing the administration's "secrecy, deception and disdain for the law" was an encroachment on executive authority.

The other architect, Karl Rove, Bush's senior political aide, began his career as an agent of Nixon dirty trickster Donald Segretti -- "ratfuckers," Segretti called his boys. At the height of the Watergate scandal, Rove operated through a phony front group to denounce "the lynch-mob atmosphere created in this city by the Washington Post and other parts of the Nixon-hating media."

Under Bush, the Republican Congress has almost completely abdicated its responsibilities of executive oversight and investigation. When Sen. John Warner, R-Va., chairman of the Armed Services Committee, held hearings on Bush's torture policy in the aftermath of the Abu Ghraib revelations, the White House prodded rabid House Republicans to attack him. There have been no more such hearings. Meanwhile, Bush insists that the Senate vote to confirm John Bolton as U.S. ambassador to the United Nations while refusing to release essential information requested by the Senate Foreign Relations Committee.

One of the chief lessons learned from Nixon's demise was the necessity of muzzling the press. The Bush White House has greatly neutralized the press corps and even turned some reporters into their own assets. The disinformation on WMD in the rush to war in Iraq that was funneled into the news pages of the New York Times is the most dramatic case in point. By manipulation and intimidation, encouraging an atmosphere of self-censorship, the Bush White House has distanced the press from dissenting professionals inside the government.

Mark Felt's sudden emergence from behind the curtain of history evoked the glory days of the press corps and its modern creation myth. It was a warm bath of nostalgia and cold comfort.