Hayao Miyazaki's latest animated tale may spirit away his many fans. Others, alas, may find themselves altogether unmoved. 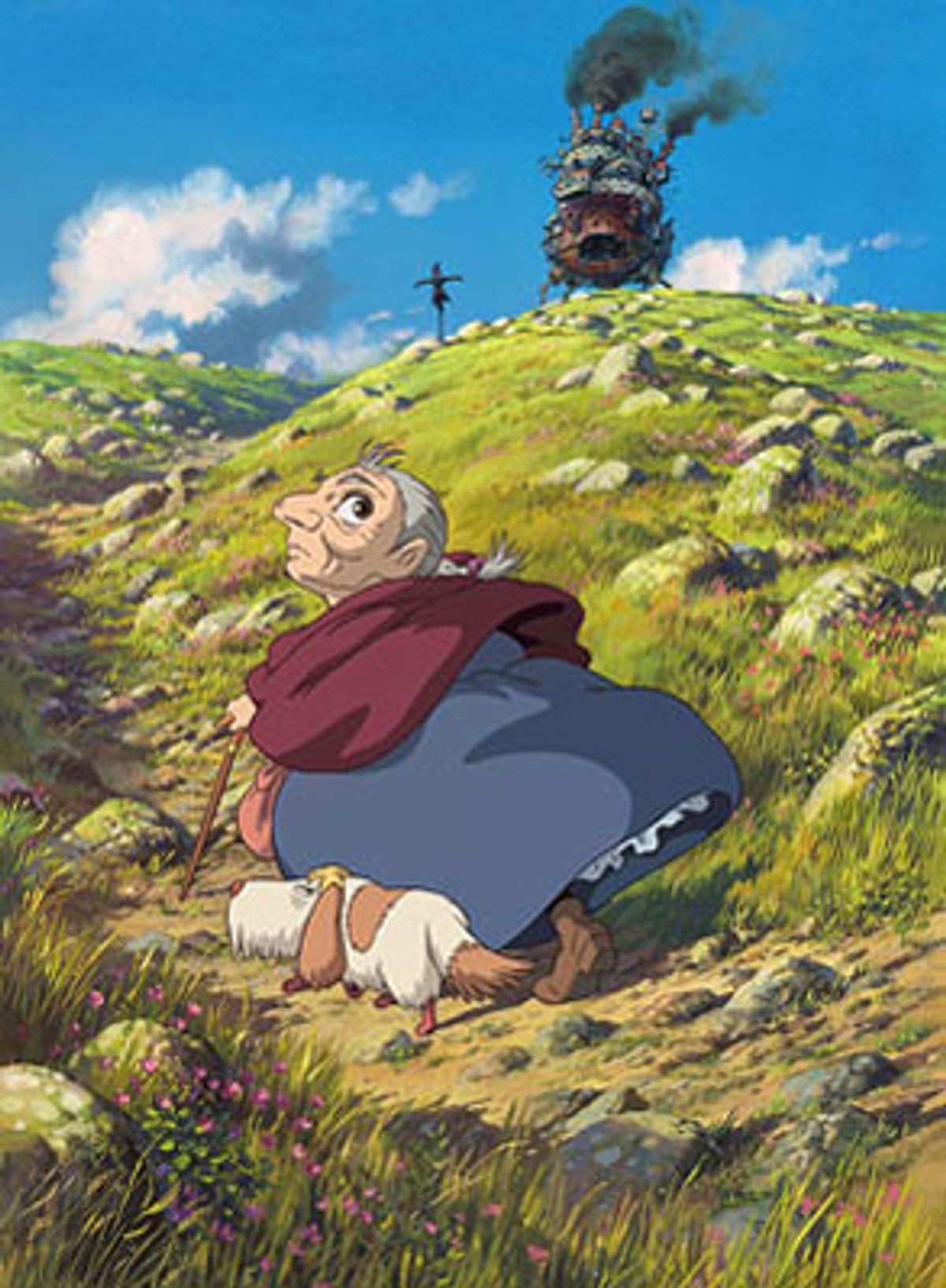 Critics and audiences -- in fact, practically all human beings in the universe, at least the ones I know, anyway -- seem to be unequivocally enchanted by the animation of Hayao Miyazaki, most notably his 1997 feature "Princess Mononoke" and the 2001 "Spirited Away." To those who take so much pleasure from Miyazaki's work, I can only offer an apology and a confession: I've tried very hard to like Miyazaki's inventive yet chilly animated epics -- including his latest, "Howl's Moving Castle" -- but their charm eludes me.

In some ways, Miyazaki should be my ideal filmmaker: I believe that dream logic is a perfectly valid form of plot construction, I love offbeat visual details and curlicues, and I appreciate the meticulousness with which Miyazaki maps out each frame, paying careful attention to composition and perspective. But at the risk of summoning the Turnip Demon to my very doorstep -- where he'll indignantly shake his wattles at me in that "You'll never work in this town again" way -- I must come clean: Miyazaki bores me to tears.

There's much to admire in "Howl's Moving Castle," which is precisely the problem: Its whimsical grandiosity practically invites us to use the passive voice, a kind of verbal genuflection. Some of the picture's images are striking, most notably the "castle" of the title, a ramshackle mechanical-birdlike structure that clanks and creaks through the countryside on clumpy metal chicken-feet; its outside is "feathered" with metallic shingles in pink, teal and grass green. This is the home of Howl (Christian Bale provides his voice in the dubbed version), a seemingly all-powerful wizard who's really a scaredy-cat with some crippling insecurities. (The movie's Japanese title is "Hauru no ugoku shiro," and a subtitled version will be released in some theaters; at the screening I attended, the dubbed version was shown.)

The story, based on a book by English novelist Diana Wynne Jones, takes place in an English somewheresville of the imagination (we see half-timbered houses in various pastel shades and grassy fields dotted with fat sheep), at the turn of some century if not the last one (the women wear high-button shoes and wide, extravagant hats). Our heroine is a plucky young milliner named Sophie (voiced by both Jean Simmons and Emily Mortimer) who finds herself on the bad side of a wicked old girl known as the Witch of the Waste (Lauren Bacall), a dowager with a quadruple chin and a monobosom. She's jealous because Howl, her old flame, and Sophie have just met, briefly, and she realizes that Howl has been charmed by the brave, sensible young woman. She puts a spell on Sophie that turns her into an old woman; the spell also prevents Sophie from telling anyone what has happened to her.

So far so good, and anyone who has seen a Miyazaki picture knows that the details aren't supposed to add up to any kind of conventional logic, anyway. Even so, the plot of "Howl's Moving Castle" meanders so listlessly that its details become less and less charming. Miyazaki's storytelling style resembles that of a breathless young tot who's fearlessly exercising his newfound powers of expression. Parents are often thrilled when their little ones make up plodding stories about bunny rabbits riding bicycles and the like, offering them as evidence of either their child's vast genius or, slightly more tolerable, that all-too-frequently fetishized monolith, the childlike imagination. Children are imaginative, and it's often fun, and illuminating, to get glimpses into how their brains work. But I really don't want them to write movies.

Miyazaki's narratives are wriggly, noodle-shaped things, and that's not supposed to bother us: Evil beings inexplicably become good; characters set out on quests that aren't really all that necessary but allow them to travel to weird, magical places; wars happen for no reason other than to remind us that war is bad; people fly through the air just because it looks cool. All of these things are painstakingly laid out before us, designed to make us clasp our hands in delight but never to stop to ask, "Why?" -- or even the more deadly question, "Who cares?"

The character design in "Howl's Moving Castle" left me cold, too. Sophie, with her puffy, grandma-like body, is reasonably appealing. But I kept thinking how much Howl, at the beginning of the picture, looked like a tall, blond Michael Jackson: He's draped in a military cape and sports a barely there sliver of a nose. (Later, when he becomes a brunet, the resemblance is even more striking.) Fairy-tale heroes are, of course, supposed to be asexual and nonthreatening. But Howl is sexless to the point of being creepy. Far more interesting is the good fire-demon, Calcifer, who delivers his lines like a Borscht Belt pro (not surprising, given that Billy Crystal provides his voice).

I confess that my problems with "Howl's Moving Castle" may have been exacerbated by the fact that I'd been lucky enough to see a new movie by the 82-year-old wild-card director Seijun Suzuki in the same week. Suzuki's "Princess Raccoon," which stars the luminous and dazzlingly gifted Zhang Ziyi (and which will play the New York Asian Film Festival later this month), is the kind of dream-logic fairy tale that Miyazaki's pictures aspire to be -- it's live-action filmmaking that's more enchanting, and wilder, than almost any animation I've ever seen. "Princess Raccoon" is a musical that was clearly made on a tiny budget, though it feels lavish: The hero must save the life of the woman he loves by capturing the Frog of Paradise, which is really just a small gilt figurine but which nonetheless has a healing croak; spirit characters emerge from a rock grotto that's basically a charcoal-drawing backdrop, and the juxtaposition of reality and fantasy is heart-stopping.

"Princess Raccoon" is inventive, weird and beautiful, all the qualities that are commonly ascribed to Miyazaki's movies. But unlike "Howl's Moving Castle," it's also passionate and heartfelt, and not just an exercise in studied whimsy. Sadly, unlike "Howl's Moving Castle," "Princess Raccoon" won't play multiplexes, which means that relatively few people will have a chance to see it. Miyazaki may be a mischievous, talented demon; but Suzuki is a grand, invisible prince.