The fastest woman on four wheels has given the auto-racing world -- and pop culture -- a desperately needed break from NASCAR's all-American banalities. 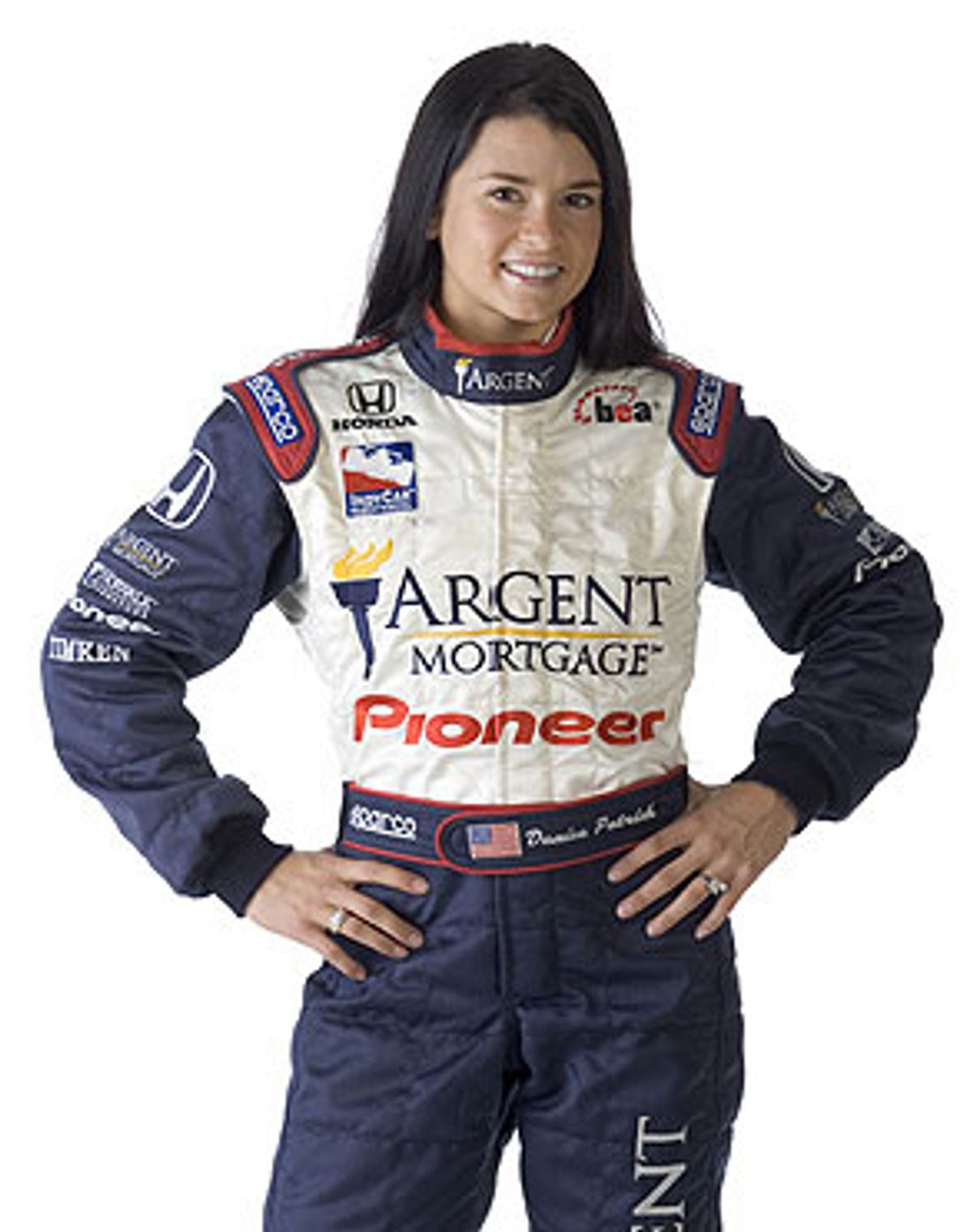 Here's hoping Danica Patrick blows away the competition Saturday night at the Texas Motor Speedway, her first race since finishing fourth at the Indianapolis 500 on May 29, and her first since being anointed the Joan of Arc of auto racing. Patrick is primed to win by starting third. She qualified ahead of 19 other drivers, including the three who beat her at Indy, proving again that her driving skill, unlike her star turn in the media for the past two weeks, is no novelty. For all sports fans, Patrick has injected Indy car racing with an excitement and glamour it hasn't experienced since Mario Andretti blazed by in furious Ferrari red. Drivers then were glamorous and daring; their feats exhilarating, a slipstream to a dreamlike world of mystery and charm. Andretti was James Bond, Monte Carlo cool, an untouchable.

When Patrick swerved into the lead of the Indy 500 with 10 laps to go, and held the top spot for three laps, she single-handedly rekindled the spirit of Indy car racing, doused for years by lackluster competition. Best of all, Patrick's sprint to the head of the auto racing world has given pop culture a break from NASCAR, the "The Great Inescapable, the 200-mile-an-hour platinum-plated V-8 powered Stars and Stripes hero machine." That's sportswriter Jeff MacGregor, coked up on lines of vintage Tom Wolfe, describing NASCAR in his fabulous new book about the phenomenal stock car association, "Sunday Money."

That it took a 23-year-old woman who is a pinch over 5 feet tall and weighs 100 to rev up Indy racing says a lot about her magnetism and more about the delight of watching a woman beat men at their own game. Since the Indy 500, the young star has glowed in the spotlight, relishing her role as a public-relations bonanza for the Indy Racing League. "I don't feel insecure about being girlie," she told Sports Illustrated. "I do as much media as I can because I want this IRL series to be so kick-butt that NASCAR goes, 'Huh?'" Her pinup shots in FHM magazine, revealing her clad in tiny leather hot pants and vest, won't win her any points with Catherine MacKinnon. But what would?

Still, Patrick wants to be known for her talents, not gender. After all, she didn't spring from the forehead of Aphrodite to materialize in the cockpit of a million-dollar race car.

Growing up in a small town in northern Illinois, she began to fill her parents' shelves with go-kart-racing trophies when she was 10. As a teenager, she excelled in open-wheel racing (the kind of sleek cars you see at Indy) in the prestigious Formula Vauxhall Championship in England. In 2003 and 2004, she finished in the top five in overall points in the Toyota Atlantic series, the AAA league of Indy car racing, and the breeding ground for both 2004's Indy 500 winner, Buddy Rice, and this year's victor, Dan Wheldon. Unlike sports that give men an unfair advantage over women, auto racing begins on an even playing field. It doesn't require testosterone and undue physical strength to keep the accelerator on the floor and the car on the track. Racing at high speeds demands intuitive intelligence, finesse and unyielding stubbornness. In fact, a real wonder in auto racing is why there are not more Danica Patricks.

The prospect is already getting under the thin skin of some male drivers. Robby Gordon kicked up a media dust storm when he said he would never race against Patrick because the diminutive driver had an unfair advantage. Nonsense, said racing officials, her bantam weight had a negligible impact on a car's speed. If Gordon was worried about falling behind Patrick, many commentators suggested, perhaps the portly driver should avoid that extra lap around the buffet table at Harrah's, one of his sponsors.

In "Sunday Money," while portraying Tony Stewart, a former champion on the Indy racing circuit, and now a NASCAR megastar, MacGregor writes that for "many decades the mastery of Indy cars was the American gold standard for a Professional Racecar Driver. For handling, for horsepower, and for sheer swagger, they are almost unmatched. The only thing an Indy car can't do these days is make you famous." MacGregor is going to have to revise that last sentence for the post-Danica paperback version of "Sunday Money."

More to the point, Patrick's fame now rises like a breath of fresh air over the cultural inferno of NASCAR nation, into which MacGregor plunges readers without mercy. Determined to decode the riddle of NASCAR's success, MacGregor and his wife, Olya, a photographer, bought a tricked-out motor home and rumbled across the country to attend every NASCAR race in 2002. Along the numbing interstates and refreshing blue highways, MacGregor traces the gothic Southern history of NASCAR, the prohibition days when grizzled drivers earned their stripes by carrying moonshine and outrunning cops on country roads. At every stop along the way, not to mention every Wal-Mart, MacGregor burrows into the cultural heart of NASCAR and blows up -- in both senses of the term -- its stereotypes.

The NASCAR dad, you say, embodiment of red-state conservative, the reason why George W. Bush is president? Forget it. "He was a fiction, a hypothetical, a statistical mean," MacGregor writes. "He was the anthropomorphized mascot of the destabilized center, the patriot angel and the hillbilly boob, a strategic abstraction in the shadowbox of American politics. He was a scarecrow flapping in the wind."

Camped out at racetracks beneath circus tents of ads for Budweiser, Tide, DuPont and Viagra, MacGregor discovers that NASCAR dads and moms are driven not by politics or politicians but the more powerful American traits of consumerism and celebrity. Without condescension, he delves into the rabid passions of the "Pit Lizards," shares their barbecued ribs and Coors Lights, and is serenaded nightly by "Free Bird."

"All sports are theater of a kind, but the intensity of the fans' passions out here -- 'We love you, Junior!' -- is profound, different, and runs much hotter and deeper than anything I've seen in other big-league sports," MacGregor writes. "It has to do with the life-and-death stakes, I think, and with the haunted history of the South and its cult of personality and our yearning for simplicity and our insatiable craving for celebrity and our ache for fable and our need to live vicariously in the glamour and accomplishment of others and our persistent American itch to create heroes." Nicely said, although this note about a fan and her favorite driver, Dale Jarrett, was probably the only description MacGregor needed: "Outside the press center, I saw a woman with a disposable camera taking a picture of Dale Jarrett's picture on a Coke machine."

Better than any sportswriter to date, MacGregor cracks the glazed personas of rock star drivers Stewart, Jeff Gordon and Dale Earnhardt Jr. His insights into four-time champion Gordon are killer: "You see that Ace Racer face lasering right-angle rectitude back at you from a box of Frosted Mini-Wheats or a can of Pepsi or the pages of DuPont's annual report, that earnest deadpan of handsome capitalism, and you're not buying excitement, you're buying his soothing reassurance -- and not just about sales or soda or cereal, either, but about yourself, about America, about the world."

MacGregor goes to great lengths to treat NASCAR fans and drivers with sympathy. He has a generous heart, and he succeeds. Still, the America that emerges from his turbocharged pages, or at least the America that NASCAR represents, leaves you with a sour aftertaste. Beneath all the hilarious riffs about 40,000-watt Molly Hatchett air guitarists, and touching scenes of Earnhardt Jr. signing autographs for star-struck kids, beat the ugly rhythms of racism, homophobia and sexism. "Welcome to NASCAR! Please reset your watches to 1957." MacGregor's being funny but he's not kidding.

Ultimately, too, MacGregor's conclusion that NASCAR has abandoned its Southern roots to bloom in the middle of the bland American entertainment industry is also dispiriting. Sports deliver us from the working world and allow us to feel joy and excitement more real than vicarious. They still do, only now the edges of our experiences are tainted by those trying to sell us something other than the elation of a home run, touchdown, or pass on the high side of turn four. In MacGregor's words: "Dale Jr. won the 2004 Daytona 500. And that year became the first human, other than Colonel Sanders himself, to have his face rendered on a bucket of KFC Chicken."

For now, the vibrant Patrick, smart and sexy, appears in total control of her image and symbolizes only the excitement and glamour of racing, the transcendence of speed, the freshness of sports. Her race Saturday is bound to attract more fans and TV viewers than any in the Texas track's history. It's a brilliant turn of events. By keeping men in her rearview mirror, Patrick has shifted auto racing back into high gear.