We've made progress in the way we elect our representatives, but we need to lose the winner-take-all system. 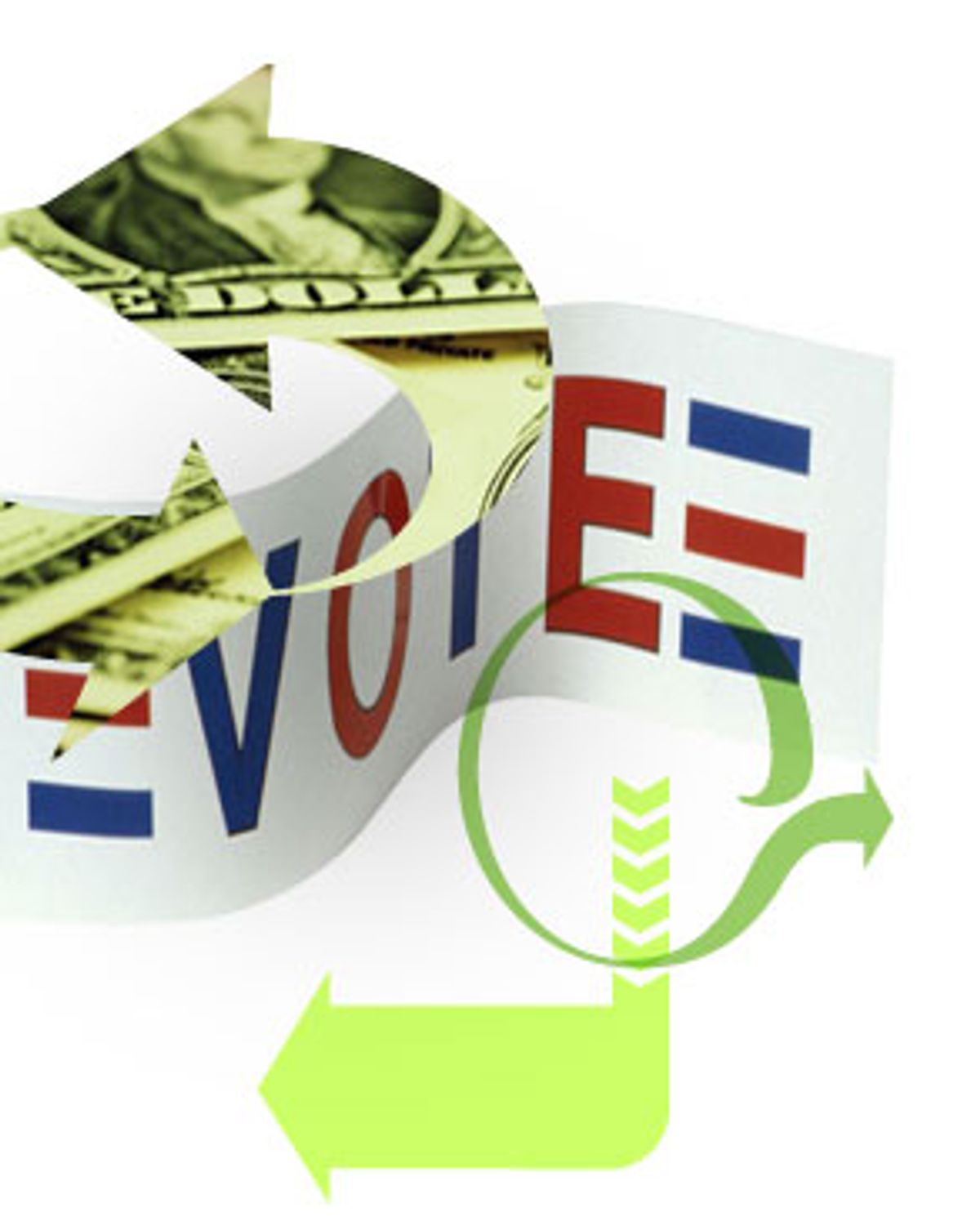 Politics involves the art of achieving the possible. Rarely do you get what you want, so you take what you can get. But when it comes to electoral reform, reformers run the risk of overpromising in trying to gain attention for their particular issue -- and can end up underdelivering, increasing voters' cynicism.

Two of the most talked-about electoral reforms in the past decade have been the public financing of election campaigns and the use of independent commissions to redraw legislative district lines. While reformers have had limited success passing those two reforms -- to date, only a handful of states use either public financing or independent commissions, and even fewer use both -- when enacted, the reforms have been accompanied by great fanfare and hope.

Yet the impact of the two reforms has been disappointing, and it may be time to extend our efforts at reform to the primary culprit in our broken democracy: our winner-take-all elections.

Arizona, for example, has led the nation in electoral reforms, but so far has had limited results. The Grand Canyon State passed voter initiatives in 1998 and 2000 that enacted both full public financing for state elections and an independent redistricting commission. Yet recently when I gave a speech at the annual convention of the Arizona League of Women Voters, which had spearheaded the state's reform efforts, I was surprised to hear the frustration voiced by many league members and other Arizona reformers. The post-reform electoral results have neither fulfilled their expectations nor matched the campaign hype that sold the reforms to voters.

Indeed, Arizona now has some of the least competitive races in the nation, which is not what one would expect from a state with both a redistricting commission and public financing. All eight congressional incumbents won reelection last year by landslide margins, an average of 34 percent. In the state Senate, none of the 30 seats were competitive, and more than half of the seats were uncontested by one of the two major parties. In the state House, half the races were uncontested by a major party and only five of 60 races were competitive. And 97 percent of the incumbents won reelection, whether they had publicly financed or privately financed races.

To be sure, there have been positive developments in Arizona too, such as an increase in the number of candidates running in primaries and for statewide executive offices, fostering more political debate. And 10 of 11 of state officeholders accepted public financing, including Democratic Gov. Janet Napolitano. On the other hand, the Legislature has turned increasingly right-wing, and there has been no noticeable impact on legislative policy.

So, after all their hard work, it's not surprising that Arizona reformers expressed frustration. And Arizona is not alone in seeing disappointing results.

In Washington state, whose bipartisan redistricting commission produced some of the most competitive races of the 1990s, only one of nine congressional races was close in 2004; the average margin of victory was 28 percent. In the state Legislature, huge numbers of races went uncontested. Republicans dominate almost every legislative district east of the Cascade Mountains and Democrats win almost every district in King County, the most populous, with Seattle as its seat. Other states with a redistricting commission have had similarly disappointing results.

Maine does not use an independent redistricting commission, but it does have public financing for state elections. Results have been somewhat better than in other states but are nothing to crow about.

On the positive side, the number of contested primaries rose to 39 in 2004, up from 25 in 2000, fostering more political debate. And in the November election only two races were uncontested by a major party in the state Senate, and seven in the House. But Maine remains dogged by noncompetitive elections: In 2004 the average victory margin for 35 state Senate races and 151 state House races was a landslide of 20 points. Only four races in the Senate were highly competitive (won by less than five points), while 31 in the House were, but 62 House races were won by landslide margins.

With such disappointing results in state after state, the temptation might arise to abandon these reforms as ineffective. That would be a mistake. It's not that they aren't good reforms; it's just that they're more limited in their impact than most people realize -- or than reformers, caught up in their zeal, are willing to admit.

Here's what's going on in these and other states that makes public financing and redistricting commissions less potent: They have reached the limits of what can be accomplished within the confines of their antiquated winner-take-all electoral systems.

Under winner-take-all, a geographically based system, districts elect members of Congress and most state legislators one seat at a time; the candidate with the most votes wins, even if the tally isn't a majority of the total votes cast -- and everyone else loses. This system can deny representation to both majorities and minorities, and discourages voter turnout.

We've used this system for a long time (since the 18th century), but over the past 15 years something unusual has been occurring. Regional partisan demographics have been aligning in such a way that certain parts of many states have become solidly Democratic blue or Republican red. The result of this balkanization is that legislative seats that had previously been up for grabs have become one-party fiefdoms. And there's little that either redistricting commissions or publicly financed elections can do to counter that. Demography, it turns out, is destiny.

California is a case in point. In his bid to break the back of special interests and return government to the people, Gov. Arnold Schwarzenegger announced his determination to take redistricting out of the hands of the Democratic-controlled state Legislature. His campaign has created great populist sound bites, but there's just one problem: The plan won't work.

In California, liberals and Democrats dominate the coastal areas and cities, while conservatives and Republicans dominate the interior areas. To draw competitive districts, one would have to start districts in downtown San Francisco and extend them in narrow bands, like the spokes of a wheel, eastward across the Bay into Contra Costa County (the conservative area). In Los Angeles, one would have to extend the districts eastward into Riverside and San Bernardino counties, with some being little more than narrow east-west bands up and down the state, a design one pundit branded the "coral snakeamander" plan.

Such districts not only would look ridiculous but also would undermine the ability of like-minded voters, especially racial minorities, to elect their representatives and would therefore end up being challenged in court. These daunting demographics will completely thwart Schwarzenegger's attempts to shake up government.

In Arizona, liberals and Democrats are more numerous in the southern part of the state around Tucson, while conservatives and Republicans dominate the rest of the state, including Phoenix. The only way to make winner-take-all districts more competitive would be to draw narrow bands that extended vertically from south to north, like the teeth of a comb.

Partisan demographics and winner-take-all elections also result in the election of fewer moderate legislators and more extremists in places like Arizona. With so many districts locked up as Republican, a right-wing candidate who wins the Republican primary is guaranteed to win the general election. And in a primary with multiple candidates, the right-winger can win with a low percentage of the vote by mobilizing a core of rabid supporters.

In short, California, Arizona and many other states find themselves in a new paradigm in which the problem is not simply who draws the legislative lines, or whether one candidate greatly outspends the other, but partisan balkanization, in which legislators are elected via a checkerboard electoral map of individual districts. These states' winner-take-all electoral system has reached its endgame.

The way forward is to get rid of the winner-take-all system and adopt the electoral method used in places such as Peoria, Ill.; Amarillo, Texas; Cambridge, Mass.; and dozens of other local jurisdictions. This method employs multiseat districts in a way that greatly increases competition and makes public financing of candidates much more effective.

For example, instead of electing 30 state senators from 30 individual districts, Arizona voters in six larger "super-districts" could elect five senators each. With a Peoria-type electoral method, any candidate who won at least a sixth of the vote would earn one of the district's five seats. These five-seat districts likely would be bipartisan, electing some Republicans in liberal areas and some Democrats in conservative areas, greatly decreasing balkanization. Moderates, independents and occasionally even a third-party candidate would win a fair share of seats. Since all regions of the state would be competitive, voters would have more choice across the political spectrum, regardless of where they live. Not surprisingly, other nations that employ this kind of "proportional representation" system consistently enjoy voter turnout levels twice that of U.S. congressional elections.

Reformers across the country should recognize that publicly financed elections and independent redistricting commissions are valuable but insufficient reforms. If we want to revive American democracy, it is necessary to get rid of our antiquated winner-take-all electoral system.