The Jackson trial -- the best of the worst

Where was the real spectacle -- in court, or out, with the freak-show antics of O'Reilly, Grace, Scarborough, Corey Feldman, and the rest? 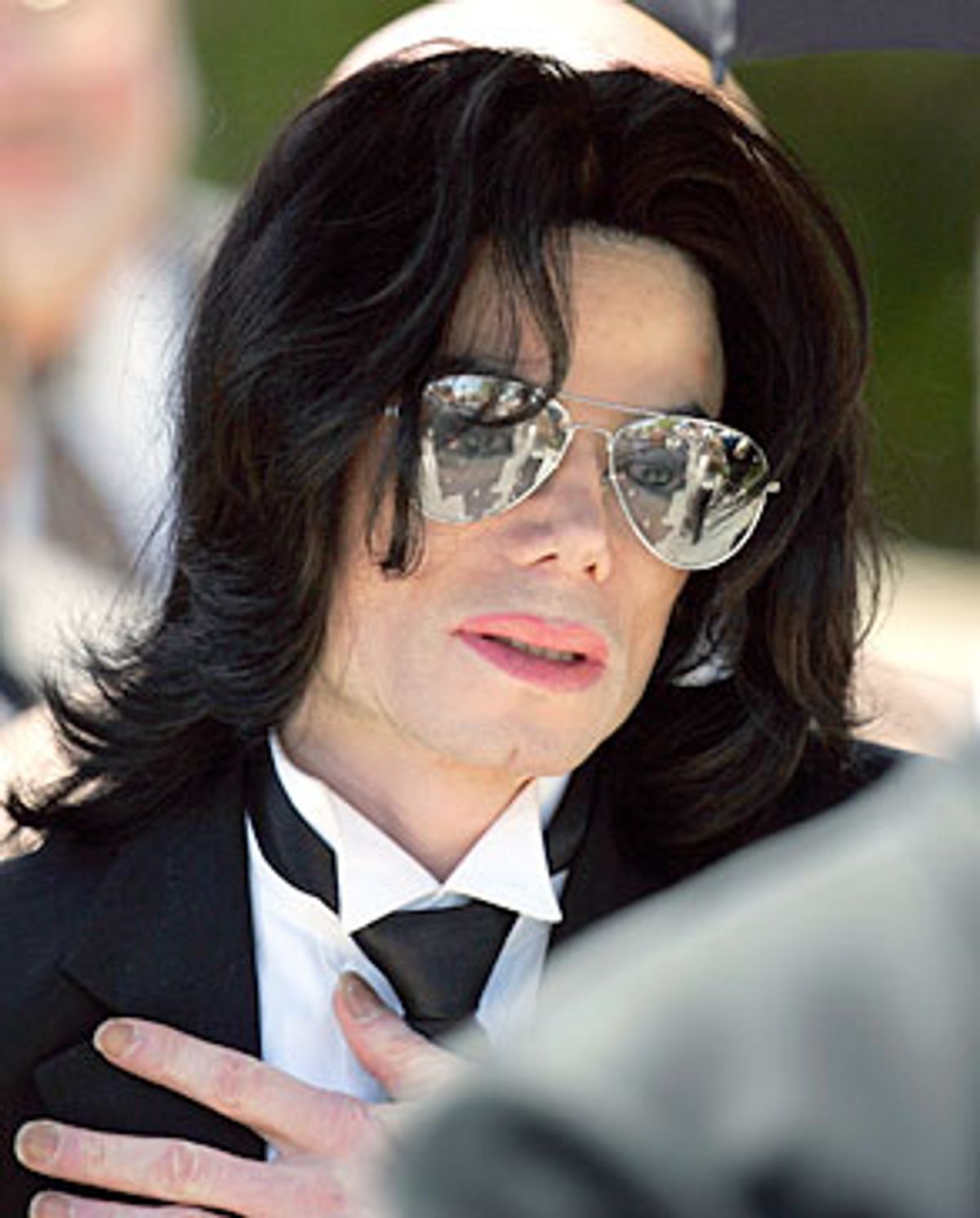 If the Michael Jackson trial were one of his albums, it would be more "HIStory" than "Thriller"; sure, it sold well, with magazines, cable news (and other) shows, and gossiping gaggles at office water coolers lapping it all up. But we've grown so accustomed to the Jackson freak show through the years that, like a bearded lady who lives across the hall, his ability to shock, or even hold our interest -- even when he was acquitted on Monday on all 10 charges brought against him -- has dimmed. And the sordid accusations in this case -- and the questionable motives displayed by all sides -- made it much easier to look away from this hyped Trial of the Century than we could ever have guessed.

The real spectacle, instead, came from the media charged with covering the case -- especially the pundits who were eager to exploit it for whatever contorted political opinion could be wrenched from it. It's been a real doozy, and trying to capture all of the Jackson trial lowlights would require a research team larger (and a lot more competent) than prosecutor Tom Sneddon's. Still, we'll give you just a few of the moments that caused our jaws to drop -- and made us pull the blinds, lock the door and turn off the lights.

Guilty until proven ... guilty!
Ian Drew, Us magazine: "I am going to get both sides of the story..."

Bill O'Reilly: "Would you tell both sides of the story for Hitler? I mean, would you say, 'Oh gee, he had a bad childhood ...'? Come on. A monster!"

"First of all, I think Michael Jackson did it. I think the guy is guilty ... I just -- every day, I wonder, can people look at this guy and be fair? I mean, you know Michael Jackson. Does he get even creepier the closer you get to him?"

"Are you guys blind? ... But I'm telling you, this boy, two-thirds of this can be corroborated by other people. So why would he lie about the molestation part? It is in graphic detail. It just seems true ... I think Michael Jackson walks. And I think it's a disgrace. He's guilty."

It's the ACLU's fault!
"But don't we speak with forked tongues? The American Civil Liberties Union stays up all night worrying lest anyone should get in the way of Angelo's sating himself, on radio and on television, in movies and in books, with the sap of degeneracy. But if Michael Jackson did it with Angelo at age 12, he is damned and we are prepared to lead him into prison. If the lawyer could prove that notwithstanding his young appearance, Angelo actually had turned 18 the week before Neverland, Michael Jackson would be protected by the engines of license in whatever he did."

The everyone knows molested children are sweet and polite and will only eat nutritious foods defense
Jackson's attorneys called upon former chef's assistant Angel Vivancio, who alleged that Jackson's chief accuser, while hanging out at Neverland, had demanded imperiously: "Give me the fucking Cheetos."

The most honest man in court
Dwayne Swingler, who was head supervisor of Neverland Ranch, is shopping around his book proposal for "Entering Neverland: Secrets Behind the Gate," according to E!. "I wanted to cash in like everyone else was," he said during the trial. He worked at Jackson's ranch for roughly six weeks in 2003.

The ladies' man defense
Neverland Ranch manager Joe Marcus, put on the stand and asked to name women Michael Jackson was close to, struggled to think of anyone besides Elizabeth Taylor.

Upon cross-examination, he thought of a second one: "Liza Minnelli has been there [to Neverland] and they seem to be good friends."

There weren't, but Marcus was able to name several boys.

Dumbest Jackson joke
From Jay Leno: "Michael Jackson showed up to court late today wearing his pajama bottoms. You know what? You find the kid wearing the pajama top and we have another court case on our hands."

As Judge Rodney Melville told the Washington Post: "I would not have expected [Leno] to not continue telling jokes ... I'd like him to make good jokes." Leno had to use stand-in comedians to tell jokes on the "Tonight Show," because as a potential witness, he was under a gag order. (Leno later testified that he had received a voice-mail message from the alleged victim and that he thought he sounded "a little scripted.")

-- Conan O'Brien on "Late Night," as reported by Entertainment Weekly

The child molestation is a god-given right defense (which never happened, except in Cal Thomas' dark, damp fantasies)!
"If Michael Jackson did, in fact, as it is alleged, have sex with a minor boy, what's wrong with that? The question is not meant to be cute; I am serious. If a male child was fondled or sodomized by Michael Jackson, why shouldn't he and the boy be allowed the orientation of their choice? If you disagree, who are you to impose your morality on them? ... Yesterday's unacceptable mores (divorce, premarital sex, abortion, homosexuality, group sex, domestic partnerships and, soon, same-sex marriage) are today's acceptable. It's just a matter of conditioning. Groups exist that promote adult-child sex. Expect an alliance -- composed of academics, theologians and cultural commentators -- to ram this home through the media, crushing whatever resistance remains ... For some, Michael Jackson is not a pervert but a pioneer."

Macauley's not working much either, friend, but that didn't turn him into a media-desperate rat fink
"I started looking at each piece of information," child star/Jackson "friend" Corey Feldman told ABC's "20/20." "And with that came this sickening realization that there have been many occurrences in my life and in my relationship to Michael that have created a question of doubt."

After the appearance, Feldman was subpoenaed, but never appeared in court. Maybe prosecutors found him an unreliable witness, considering his November 2003 appearance on "Larry King Live," in which Feldman insisted that "I have to be completely honest, because I couldn't do it any other way ... I've never seen him act in any inappropriate way to a child," including him. A decade earlier, he was an outspoken defender of Jackson.

Jackson wanted to kill Social Security reform!
Always on the lookout for a fresh, google-eyed media conspiracy theory, Fox News' Neil Cavuto decided that the media's obsession with Michael Jackson was taking too much attention away from George W. Bush -- attention that would've convinced the American public to support the president's plan to privatize social security:

Neil Cavuto: "I know this is a little outlandish, Mr. President ..."

Cavuto: "Do you think that the focus on Michael Jackson has hurt you?"

Bush: "I have no idea. I'm not -- I don't spend a lot of time trying to figure out, you know, the viewing patterns of American TV audiences.

Breaking through the media filter
Cavuto later took credit as the sole voice letting Bush in on the curse holding back his coast-to-coast Social Security roadshow. "He's had a tough sell. I tried to relate that the intense coverage of the Michael Jackson trial was being a bit of a distraction for him."