You know you're in trouble when a movie can't even get the Batmobile right. 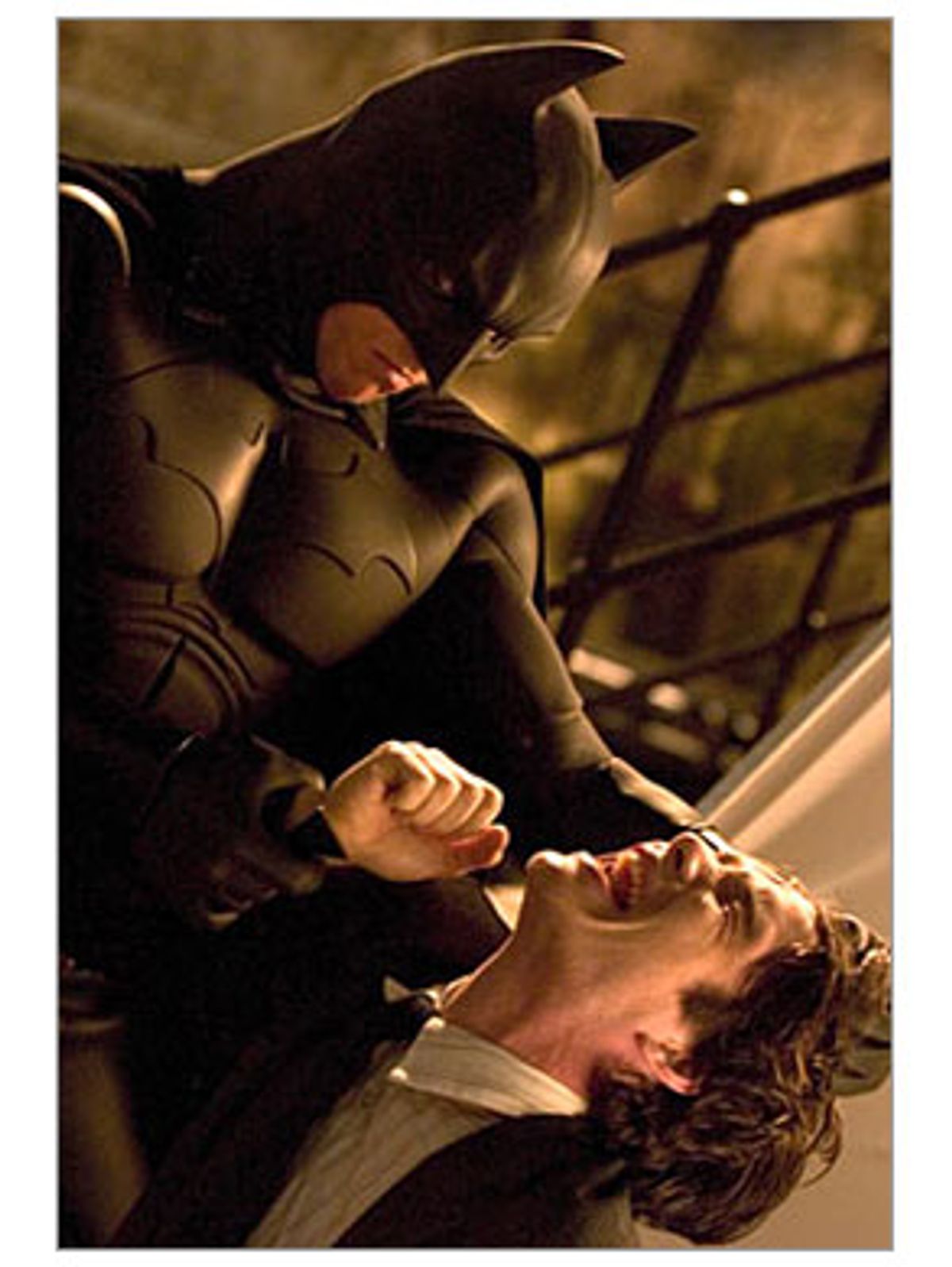 Christopher Nolan's "Batman Begins" fills in, with a series of murky pointillist dots, the back story of one of the most soulful and tortured superheroes of all. In "Batman Begins" -- which takes its cues from the original vision of Batman creator Bob Kane, embellishing it heavily -- young Bruce Wayne once fell into a well on his parents' estate and was set upon by a fluttering, flapping cloud of black bats. His dad rescued him, but predictably, batphobia set in. Worse yet, not long after the bat incident, young Master Wayne watched in horror as his parents were killed in a city alleyway. The grown-up Bruce Wayne (Christian Bale) has never come to terms with their death, and after a stint learning Ninja moves in remotest Tibet, he returns to his beloved Gotham City to help restore peace and order to its troubled streets, ostensibly so he can do the same with his mind.

Forget that guy who can't remember what happened to him five minutes ago: Nolan wants to make sure we understand that this deeply gloomy Dark Knight is really messed up. As a filmmaker Nolan has made a name for himself as a purveyor of faux-Hitchcockian gloomy cleverness ("Memento," "Insomnia"), and he has meticulously designed "Batman Begins" to be the feel-bad movie of the summer. And yet "Batman Begins," its dim lighting and relentless fixation on childhood trauma aside, doesn't make us feel quite bad enough. In fact, it makes us feel virtually nothing at all, except maybe a shuddering, reluctant nostalgia for Joel Schumacher. Schumacher's two "Batman" pictures may have been wretched, but at least they didn't mistake oppressiveness for emotional depth.

"Batman Begins" leaks existential phoniness from the first frame. Young Wayne -- remember, his Batman alter ego isn't even yet a wriggly tadpole in his completely screwed-up mind -- has traveled the world attempting to understand the criminal mind. He has been falsely arrested and thrown into a tastefully sepia-toned Asian hellhole. Suddenly, a mysterious stranger appears in his cell: It's Liam Neeson, with a list of questions about his sex life. Actually, no -- Neeson's character is Henri Ducard, and he's the associate of a mysterious baldy named Ra's Al Ghul (Ken Watanabe). They have a plan for Wayne, luring him into their nefarious scheme by promising that if he goes along with them, he will find the spiritual answers he seeks.

At their hands, Wayne learns how to creep along on little cat feet, picking up many other sophisticated combat tips along the way. And eventually, although everyone at home believes he's dead (he's been gone for seven years), he returns to Gotham and begins to take a feigned interest in his father's corporation, simply so he can gain access to the gadgets and cool stuff stored away in the HQ's basement, presided over by cool-cat genius Lucius Fox (Morgan Freeman, who brings the movie some much-needed warmth and charm). With the help of his family's longtime right-hand man, Alfred (deftly played by Michael Caine -- even his physical elegance is suffused with emotion), he sets out to build a Batcave, Batcostumes and assorted useful Batthingies.

But none of this makes Bruce Wayne happy, and what's more, he's unable to connect with the woman he cares most deeply about, his childhood friend Rachel (Katie Holmes), now a Gotham D.A. So he takes to the streets, in gear that's apparently as heavy as his heart, searching out evildoers (like Cillian Murphy's Dr. Jonathan Crane, aka the Scarecrow) and paying witness to the devastating spectacle that the impoverished, crime-ridden Gotham has become. He speaks only when necessary, and then in a deep monotone devoid of feeling or expression, and when his work is done, he retreats to Wayne Manor to listen to his Morrissey records.

OK, not exactly. But neither Nolan nor, unfortunately, the usually superb Christian Bale seems to recognize that darkness takes on many shades and colors: "Batman Begins" is a dull monotone of heavily theatrical, and yet wholly unmoving, angst. Nolan obviously didn't want his picture to be too cartoony, and that's a good impulse. But "Batman Begins" needs much more energy and kinetic flow -- less dolor and more dolomite. Bale can't seem to find an anchor for the character of Bruce Wayne; at times he's mildly affecting, but he can't locate that elusive hairline at which a character's self-absorption becomes engaging for an audience. His Wayne is so deep inside himself we can barely bring ourselves to care about him. (Bale made me long for Michael Keaton's first appearance, in particular, as Batman -- a performance that seemed breezily neurotic on the surface but actually cut to the heart of existential dread.)

There's another problem with "Batman Begins": Batman's stuff has no soul. His mask, with its alert, pointed ears, does manage to give Bale a somber grace from some angles. But Bale (unlike Keaton) has trouble connecting from beneath it -- it wears him instead of the other way around. In a movie whose production design is both massively ambitious and uninspired, the Batmobile is one of the biggest bummers of all: It's like a squat bug covered with clumsy square scales, a dismally unromantic vehicle that looks wholly unsuited for parallel-parking practice, let alone flying through the streets of Gotham.

And as hard as Nolan tried to make something other than a typical comic-book movie (although anyone who keeps an eye on comic-book movies realize there's no such thing), the script, by David S. Goyer, works at cross-purposes. As the movie grinds dully toward the finish line, Neeson announces, with drawing-room enunciation, "Now if you'll excuse me, I have a city to destroy." And Tom Wilkinson, who seems to have wandered in from another movie with his cigar-chomping performance as a mob boss, actually says at one point, "Don't burden yourself with the secrets of scary people." In the midst of all this, Gary Oldman gives a finely tuned performance as not-yet-commissioner James Gordon: We see intelligence and honor in his blinking, nearsighted eyes and his twitchy mustache. In a movie that aspires to emotional complexity and comes up empty -- even the action sequences are cluttered and confusingly shot -- he hits the notes right. Playing a character and not a psychological case study, he's one of the few actors here who's unburdened by the secrets of scary people.