Bush is not above the law

Scholars missed the point of the essay I wrote with Ralph Nader about the case for impeachment. 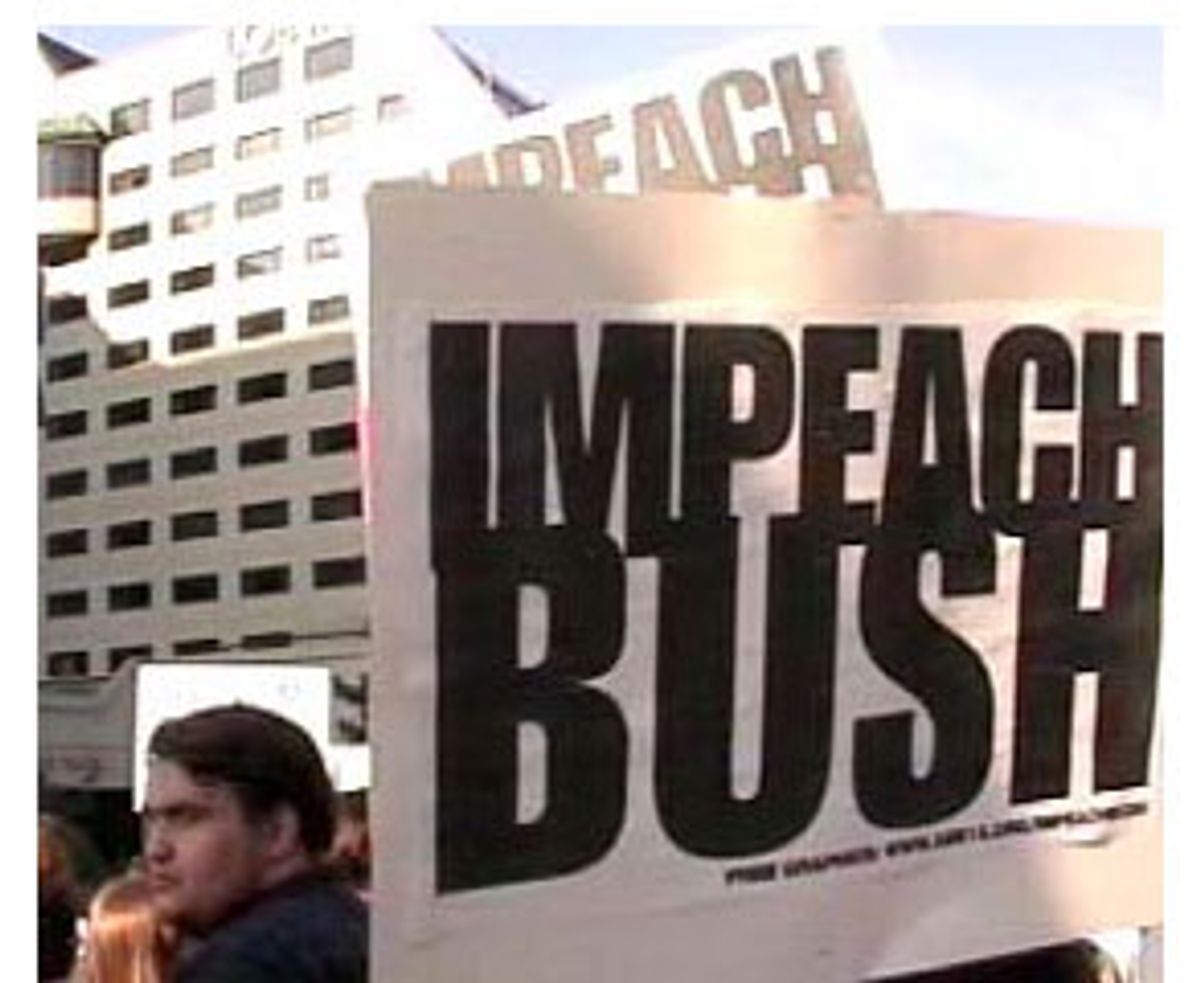 The fundamental question is whether Congress and the American people were misled into an unnecessary, illegal war that has turned into a quagmire. Are the indications of false statements and misrepresentations sufficient to justify a pursuit of the truth?

The evidence includes a series of exaggerated and false claims by President Bush, Vice President Cheney and officials in their administration over many months as the drumbeat for war grew louder. Statements were made in contradiction to the evidence included in intelligence documents from a wide range of U.S. and international agencies. As weapons inspectors were unable to find weapons of mass destruction, President Bush's rhetoric increased to the point of warning of a potential mushroom cloud over the United States generated by a nuclear attack by Saddam Hussein.

And, most recently, explaining these inaccurate statements, is the Downing Street memo, which summarizes a meeting at which the head of British intelligence reported that the Bush government was "fixing the intelligence" to support its plan to invade and occupy Iraq. On June 13, Raw Story printed five additional leaked British memos showing that the commitment to go to war occurred well before the issue was brought to the attention of Congress. If true, this changes the consistently inaccurate statements into intentionally false statements.

Unfortunately, there is no court of law in which to pursue these claims. No one has standing to sue the president for false statements leading to war. This can only be pursued by Congress in an impeachment inquiry. Should the president be held accountable for his actions? Is the president above the law or subject to the law? A "Resolution of Inquiry" is the first step to determining whether the president and vice president have committed "high crimes and misdemeanors." If they have, impeachment is surely appropriate.

A secondary question is the likelihood of success. All of the law professors Salon asked about impeachment opposed it because Congress is controlled by Republicans and therefore it is not possible. However, if you were a Southern sheriff in 1932 and you knew that members of the local Ku Klux Klan had lynched an African-American, but also knew that the all-white jury of their peers was not likely to convict, would you prosecute the case? Shouldn't the opposition party be raising the issue of impeachment because of false statements that led to an unnecessary war -- no matter how it turns out -- to ensure that the truth is uncovered?

Of course, it is difficult to predict the likelihood of success before the evidence is even gathered. Gathering the evidence is what the impeachment inquiry is for. But already we can see some breaks in support for the president from members of his own party. Most notably, Rep. Walter Jones, R-N.C. -- infamous for changing the name of the congressional cafeteria's French fries to "freedom fries" in protest of France's position on the war -- now recognizes he was misled into supporting the Iraq war and wants U.S. troops to be brought home.

What will happen if more evidence comes out? If members of the intelligence community, current and former, are subpoenaed to testify under oath and they testify about how intelligence was manipulated, will there be more defections from the president's base of support?

And, facing reelection next year and with their popularity already at a very low 33 percent, will members of the House risk their political careers to cover up for a lame-duck president who lied to get the United States into war and whose popularity is also dropping in the polls?

One of Salon's commentators, Cass Sunstein of the University of Chicago, took a particularly bizarre position. He opined that we should expect dishonesty from our president -- so what's the problem? Said Cass, "In any four-year period, the nation's leader is highly likely to deceive the public on a serious matter at least once -- sometimes inadvertently, sometimes for legitimate reasons, sometimes for illegitimate ones. Of course presidents should not exaggerate evidence, and it's perfectly proper to ask whether Bush got us into war under false pretenses. But there isn't anything close to a sufficient basis for impeachment."

For shame. Let us hope we have not gotten so cynical about the honesty of the president of the United States that we would allow him to lie to send American troops to their death! Surely this type of dishonesty is, as Mark Tushnet of Georgetown University Law Center noted in his Salon commentary, "exactly what the impeachment provision is all about." He went on to properly describe impeachment as a "mechanism for removing from office a person who had demonstrated the kind of political irresponsibility that seriously threatened the nation's political institutions."

Other Salon commentators say impeachment is inappropriate because the president was reelected to a second term. Yet, in 2004 Sen. John Kerry also supported the war and said he would have supported invading Iraq even without evidence of WMD. So there was really no debate on this topic. And if reelection cleanses the record of a president, then Richard Nixon should not have been threatened with impeachment. The Watergate break-in was reported in the Washington Post during the 1972 campaign. The public knew about it and Nixon won in a landslide victory. Should that have ended the investigation of Watergate? Of course not.

It is time once again for Congress to take up its constitutional responsibility as a coequal branch of government and provide a check and balance on a president who seems to have broken the law by manipulating intelligence and sending the nation to war.