"The world just fell out from under me" 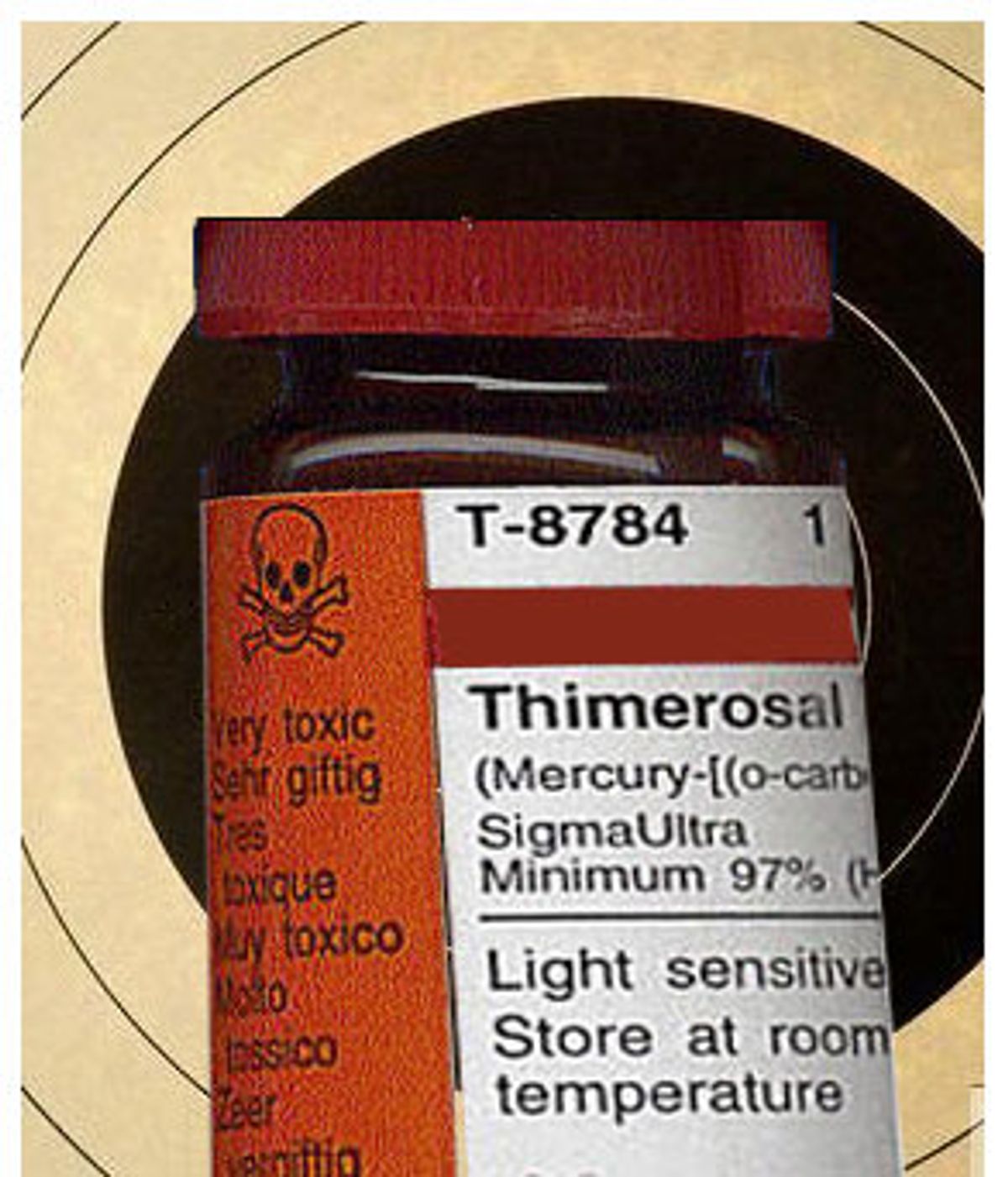 Early in 2003, Lujene Clark noticed that her 8-year-old son, Devon, was acting up more than he ever had. He had emotional outbursts, stopped responding to simple commands, and became extremely sensitive to noises and smells. When the family shopped at Wal-Mart, Devon would throw a tantrum, or race around, slapping his hands together. "He used to be the best-behaved child in a restaurant, but now we couldn't take him inside one -- the clattering of dishes was too much for him," Clark says. "He would start to scream. It was like a nightmare we couldn't wake up from."

That September, a neurophysiologist diagnosed Devon with Asperger's syndrome, a mental disorder related to autism, which affects children's social and communication development. But when Clark researched Asperger's on the Internet, she was shocked to learn something she hadn't heard in the physician's office. Some studies had found a correlation between Asperger's, autism and vaccinations containing the mercury-based preservative thimerosal.

Recalling Devon's childhood vaccines and flu shots, Clark says, "It was as if my world just fell out from under me. There was page after page on the potential connection between mercury in vaccines and autism in children." Clark is a retired nurse and her husband, Alan, is a physician. "I had vaccinated hundreds of children and so had Alan," she says. "I thought, My God, not only did I hold my child down for his vaccines, what if I played some part in doing this to someone else's child? It was almost too horrible for me to believe."

Determined to help her son and affected children, Clark became an activist in the battle against thimerosal. "I can't change the fact that this happened to my child, but I can certainly try to move heaven and earth to see that it doesn't happen to another child," she says. "If mercury is the problem, and there are alternatives to putting it into vaccines, there just needs to be a law against it."

Clark frequently travels to Washington to lobby legislators for a ban on vaccines containing mercury. She meets with state senators to help prepare anti-thimerosal legislation and works with other parents to enact bans across the country. Her campaign has brought her head-to-head with big-name legislators like Senate Majority Leader Bill Frist and Pennsylvania Sen. Rick Santorum. Clark describes herself as a lifelong Republican, but after 2002, when the GOP added the Eli Lilly provision to the homeland security bill to protect the company from lawsuits regarding thimerosal cases (it was repealed), she couldn't bring herself to vote for George W. Bush in November.

Clark spoke to Salon on a cellphone in her car. She, Alan and Devon were driving down the Ohio Turnpike to meet a state representative in New York.

What have your interactions with Washington lawmakers been like?

In Washington, we are placed with interns who are so young they can't fathom what we're talking about. They don't have kids. You can predict what's going to happen: They nod, take copious notes, and tell you, "Senator so-and-so cares very much about this issue."

Although we met with Senator Rick Santorum briefly, his staff was condescending and patronizing, and made statements that were simply untrue, like there was no scientific evidence that linked mercury in vaccines to autism. And without telling us, they invited Senator Bill Frist's people into the meeting. They were observing the interaction very closely. Senators Frist and Santorum are co-sponsors of a new bill that, under the guise of protecting America in the war against terror, would go so far as to say that states cannot regulate vaccines or warn people of their potential dangers. It would shield vaccine makers from lawsuits.

Why do you think Senators Frist and Santorum inserted the vaccine provision into the Senate bill, officially called Protecting America in the War on Terror Act of 2005?

The pharmaceutical industry has a hold over many in Congress because of its extensive campaign contributions and lobbying. That explains why we're meeting a lot of roadblocks in Washington. Their influence on the Federal Drug Administration, the Centers for Disease Control and the National Institutes of Health is very strong. It's a David and Goliath fight -- there's no way I can walk into Washington and have the access that many of these pharmaceutical lobbyists have. I can't write a check that large.

A lot of the people in key decision-making positions have conflicts of interest, and connections to the pharmaceutical companies. But I don't believe every person in government is corrupt. I don't believe there's been some sort of conspiracy at work. I think there are some high-ranking officials at the FDA, CDC and in Congress who probably, for the sake of protecting the immunization program, made some very bad decisions. It's made me angry, but I'm determined to keep taking the evidence around until I find that person in a position of power who says, "This has to be corrected."

How do you stay motivated when you're stonewalled by legislators?

When they were studying Martin Luther King Jr. in school a few months ago, Devon's class did an art project called "I have a dream." Alan and I were walking down the hall at school one day and saw the project on the wall. The children had written, "I want to be a soldier" or "I want to be an actress" -- all the dreams children have. Then we came to the last drawing and it was Devon's. Do you want to guess what my son's dream is? His dream is to end mercury poisoning. That is not a dream that a 10-year-old should have. I sent it to several lawmakers and I wrote, "I don't have the ability to make my son's dream come true, but you do."

Do you have doubts that you can convince lawmakers to ban mercury in vaccines?

Well, are there times when I feel like screaming at them? Of course, especially when they're being obtuse. I shouldn't have to go to Washington and beg people not to put poison in a lifesaving vaccine. It's such a no-brainer to me. But I have seen the political process work. I may be naive, but I still believe we have the best system in the world. It has its flaws, but if we are determined enough and angry enough, those lawmakers are one election away from not having any influence.