Under DeLay's leadership, the work of the House has become trivial, and corruption cannot be investigated, much less rebuked. 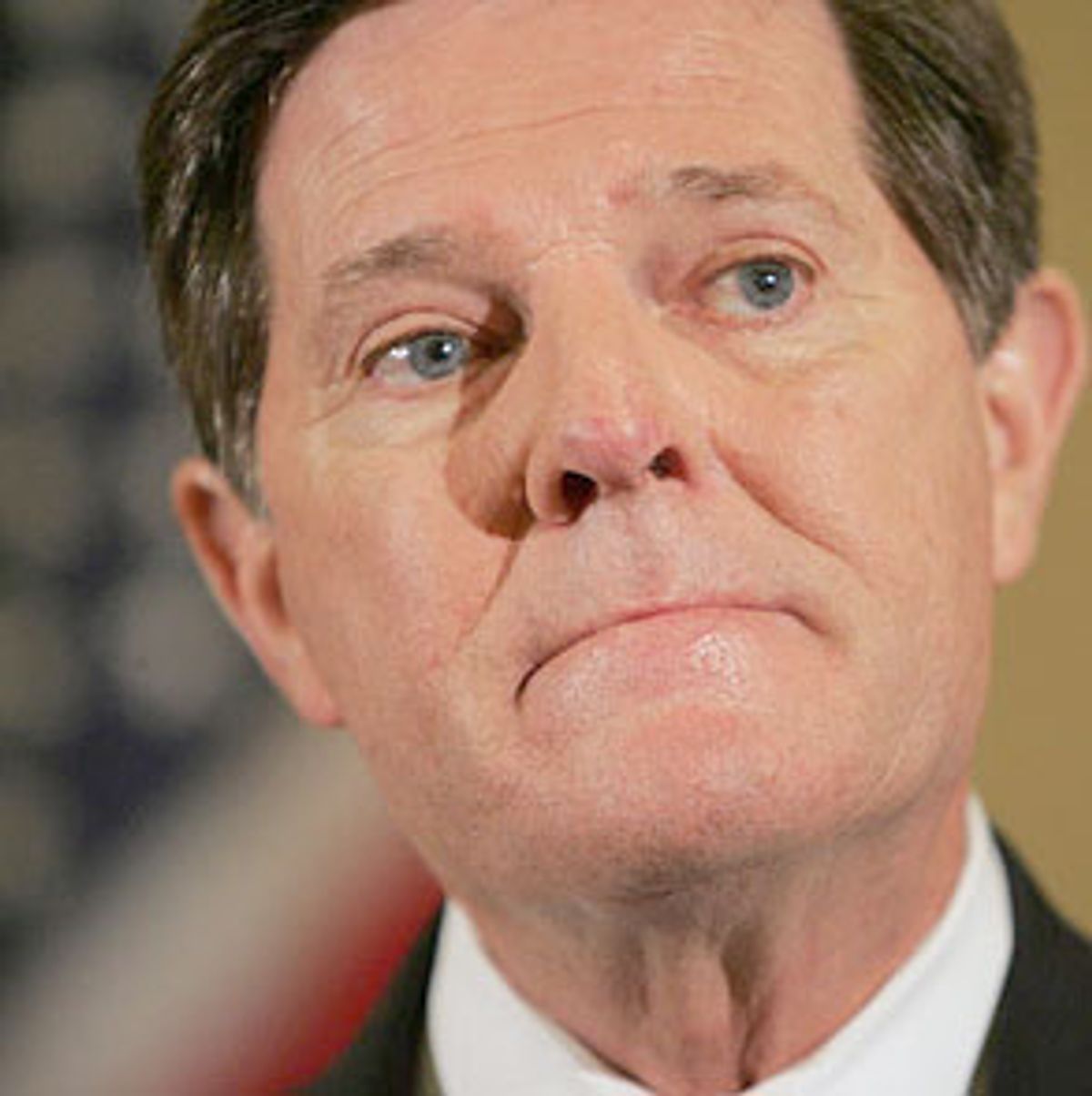 The House of Representatives of the 109th Congress suffers the classic symptoms of a decadent ancien régime. It seems an eon ago that the Republicans swept into power in 1994, after 40 years in the wilderness, on a "Contract With America" whose preamble promised: "To restore accountability to Congress. To end its cycle of scandal and disgrace."

Day by day, week by week, spectacles unfold in its august chambers revealing new incidents of corruption, unaccountability and chaos. The Republican clamor for "democratic deliberation" faded long ago, even as a distant echo, as the screws of centralized power constantly tightened. The Democrats have been prevented from debating legislation, attaching amendments and participating in conferences. Any gesture at dissent is gaveled out of order. Republican members too have been relegated to the sidelines, rubber-stamping what the leadership dictates.

"Gutless chicken shit," Tom DeLay shouted seven years ago at questions about his ethics violations. Today, the Republican majority leader frantically maneuvers to quash any investigation by the House ethics committee into three foreign trips paid for by his close friend, lobbyist Jack Abramoff, who is himself under a Department of Justice probe for fleecing Indian tribes of tens of millions of dollars. (It is illegal for members of Congress to accept foreign trips from lobbyists.)

Since the House has been in session this year, the ethics committee has met for exactly one day. On that day, in May, it decided under intense public pressure to reverse its fail-safe scheme to thwart any investigation of DeLay. The committee had announced rules by which a deadlock would lead to dismissal of any charge. Because the committee is the only one equally divided between majority and minority members, a deadlock was guaranteed, and so therefore was DeLay's escape.

But last week DeLay designed a new device to frustrate an investigation. The rules of the committee stipulate that its staff must be nonpartisan. However, another rule allows the chairman and the ranking minority member to each appoint a staff member without the other's approval. Rep. Doc Hastings, R-Wash., the chairman, seized upon that rule to name his longtime chief of staff as director of the committee. With that he succeeded in throwing a monkey wrench into the works. Predictably, the Democrats protested, the process ground to a halt, and unless it is somehow unstuck, the investigation of DeLay has been stalled indefinitely.

Although it is DeLay's tactics that have paralyzed the ethics committee, he blames the Democrats for the consequences of his own actions. "They don't want an ethics committee," DeLay complained. "They would like to drag this out and have me and others before the ethics committee in an election year." Hastings, for his part, has been exposed as having his own web of relationships with Abramoff, who boasted to a client that his ties to Hastings were "excellent."

So long as the ethics committee is in effect defunct, it cannot investigate any new cases, such as that involving Rep. Randy "Duke" Cunningham, R-Calif., which emerged in the last week. Cunningham, an influential member of the House defense appropriations subcommittee, has helped a certain defense contractor named Mitchell Wade and his company, MZM Inc., win tens of millions of dollars in contracts. In 2003, Wade paid Cunningham $1.67 million for his house in Del Mar, Calif. Wade resold it for a price that was $700,000 less than he paid Cunningham. The discrepancy suggested a neat and deliberate overpayment, having the appearance of a bribe. The real estate agent, however, stated that $1.67 million was a fair price. But then it developed that she and two of her family members had made 18 financial contributions to Cunningham's campaigns, totaling $11,500 since 1997. Under usual circumstances in the past, Cunningham's gamey situation would have been taken up by the ethics committee. But for all intents and purposes there is no ethics committee. Corruption cannot be acknowledged, much less investigated and rebuked.

While DeLay was orchestrating the latest plot turn in the ethics committee, Rep. James Sensenbrenner, R-Wis., continued his chairmanship of the Judiciary Committee as circus act. On June 10, he presided over a morning's hearing on the PATRIOT Act of witnesses invited by the Democratic minority. It was the one occasion the Democrats were allowed under the rules to give critics an official forum on the bill up for renewal. Sensenbrenner, whose routine demeanor is peeved and bilious, was on a hair trigger. He did not permit the ranking Democrat, Rep. John Conyers, D-Mich., to finish his opening statement. He refused to recognize Democrats on their points of order. Finally, he declared the hearings over. "Much of what has been stated is not irrelevant," he announced. "Point of order," said Rep. Sheila Jackson Lee, D-Texas. "No, I will not yield," said Sensenbrenner. He cut off the microphones of Democrats as their words hung in the air: "Will the gentleman yield?" and "Point of order, Mr. Chairman." Sensenbrenner stormed out the door.

Sensenbrenner's highhandedness was hardly exceptional. This spring he barred Democrats from consultation on legislation that made drivers' licenses national identification cards -- in effect backdoor immigration legislation that could lead to sweeps against illegal immigrants with licenses. Indeed, no hearings whatsoever were held before the bill's passage.

At the same time, in April, Sensenbrenner rammed through a bill called the Child Interstate Notification Act, which applies federal criminal penalties to adults aiding and abetting minors who leave a state that imposes parental notification laws to get an abortion in another state. When Democrats on the Judiciary Committee submitted amendments, Sensenbrenner and his staff rewrote their captions in the official record without informing them. In every case, Sensenbrenner's language presented Democrats as defending "sexual predators." One caption of an amendment by Rep. Jerrold Nadler, D-N.Y., for example, read: "Mr. Nadler offered an amendment that would have exempted sexual predators from prosecution under the bill if they were grandparents or adult siblings of a minor."

Right-wing Republicans like to posture as middle-class populists who are only reacting to the intrusions on individual liberty by liberal elites. But Sensenbrenner, poster child for Republican arrogance, is the pampered heir to the Kotex fortune, whose sense of entitlement is exceeded only by his rancor.

DeLay's system of centralization has Washington in its grip. Republican House members are factotums of the leadership group he dominates. The regular operation of House committees has been overthrown. Decisions are handed down by DeLay and his lieutenants. Lobbyists are convened in private to write legislation. What's more, lobbying firms are ordered to kick in campaign contributions and are under threat of losing preference if they hire Democrats. Speaker of the House Dennis Hastert, DeLay's sock puppet, opened the 109th Congress by declaring that legislation had to meet the approval of "the majority of the majority" -- DeLay's rule for right-wing control.

On about 80 percent of the bills before the House, amendments are prohibited as a result of what are called "closed rules." By manipulation of so-called suspension bills -- for example, those that name federal buildings and praise civic groups -- the business of the House has become a playpen of trivialities. Instead of substantive debate, two-thirds of all the time on the House floor is devoted to these meaningless measures. By this means, the leadership concentrates power and frustrates the House from acting as deliberative body. The schedule of the House has been reduced to something like that of a small state legislature of the 19th century, with many of its lollygagging members turning up for work on Tuesday and leaving on Thursday.

The efforts to suppress the proper workings of the House on inquiries of corruption and to quell uneasy questions about legislation from Democrats are only increasing the public pressure on the Republican leadership. Ever more rigid control is producing sharper and deeper fissures in its façade. The desperation for order fosters greater disorder. Such is the state of democracy in America that the rest of the world is encouraged to emulate.