With her gimmicky remake, Nora Ephron proves that no mere mortal can stifle Nicole Kidman's magic. 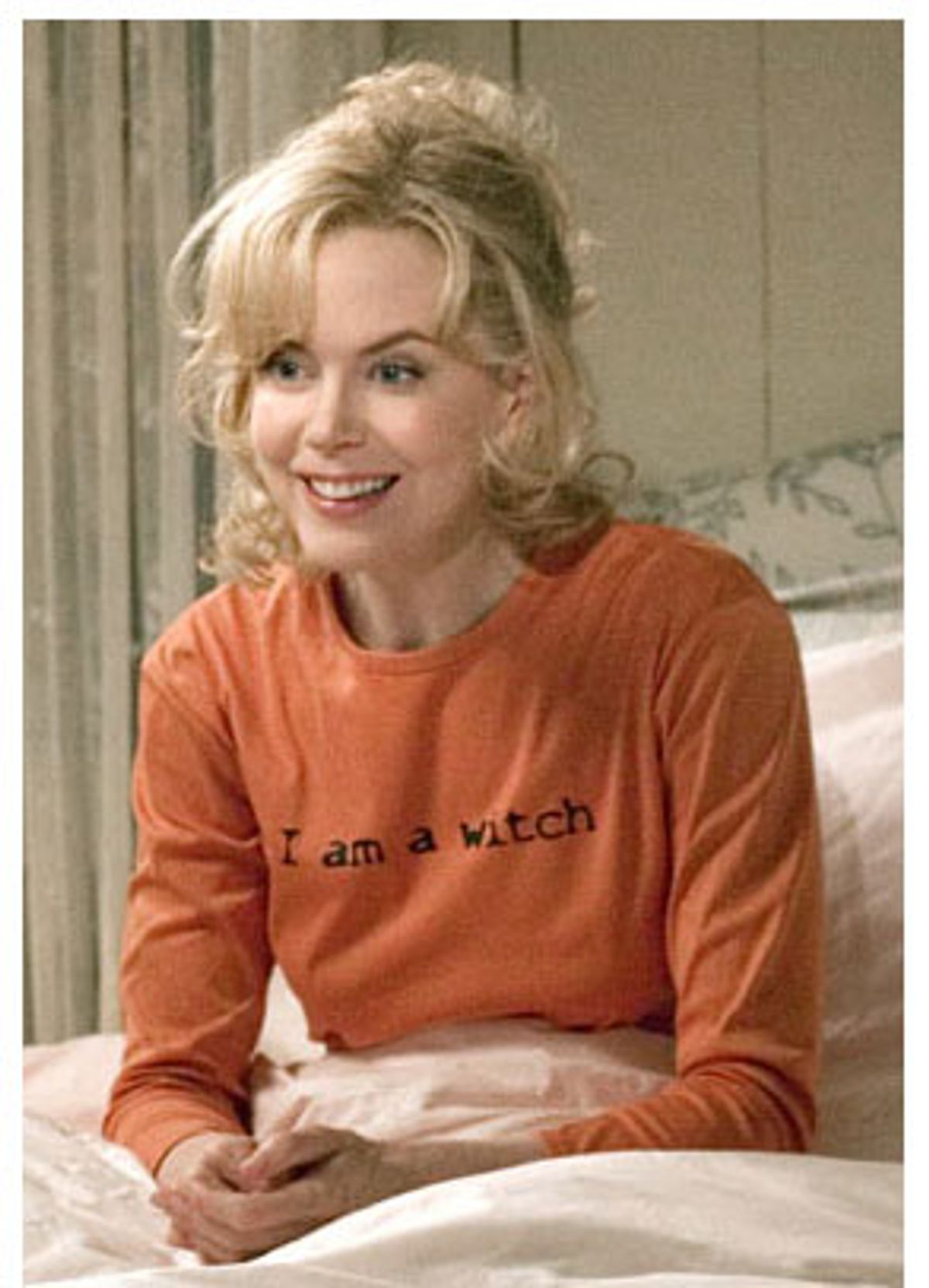 Like just about all her movies, Nora Ephron's gimmicky reimagining of the old TV show "Bewitched" has a synthetic, plasticky aroma, like a mingling of chemicals designed to simulate breezy fresh air -- the whole thing feels as if it's just been popped out of a dry-cleaning bag. Ephron must have figured no one would believe the show's premise that a witch who's yearning to live the life of a human would marry a regular suburban guy and try to make a go of it as a typical housewife.

So Ephron (who also co-wrote the script, with her sister Delia) instead gives us a witch (Isabel Bigelow, played by Nicole Kidman) who drops into California's San Fernando Valley and, by a stroke of luck, lands the leading role in a modern-day version of "Bewitched," opposite a fading, egomaniacal jerk of an actor (Will Ferrell's Jack Wyatt) who thinks playing the husband, Darrin, is his ticket back to fame and fortune. Jack quickly realizes that Isabel is so charming she could easily upstage him, so he tries to sabotage her. Meanwhile, though, Isabel is on her way to falling in love with him: She has so little experience with human guys that she doesn't realize what a self-absorbed creep he is.

The artificiality of "Bewitched" is so exaggerated that it almost works in the movie's favor for the first 20 minutes or so, before that heavy synthetic Ephron odor really sets in. "Bewitched" is Ephron's version of a Charlie Kaufman script -- Hey kids! Let's make a remake about a remake! -- and as little fondness as I have for Kaufman's winking, self-referential script-mazes, they're works of genius compared with Ephron's heavily rehearsed Jazzercise moves.

Here's a montage of Jack and Isabel on a first date; here's Isabel desperately trying to tell him she's a witch, only to have him insult and anger her (she dashes off on her broomstick, the equivalent of flouncing out of a fancy restaurant). You put your left foot in, you put your left foot out: The picture hits every mark predictably as if each one had been laid out beforehand with an X of masking tape. The picture even looks abnormally shiny: Shot by John Lindley, it has an unreal pastel glow that's pretty to look at until you realize how little the light varies from scene to scene, as if it's been blanded out by Zoloft.

Ideally, "Bewitched" would be the sort of movie no sensible person would dare to bother with. But there's a catch, and her name is Nicole Kidman. Whenever Kidman appears, it's as if she's taking everything that's phony about the picture -- intentionally and otherwise -- and buffing it down to a soft glow. She alone makes the movie almost tolerable. While Ferrell is certainly likable enough to withstand being cast as a schmo with an inflated ego, the character's shenanigans grow wearisome early on. And Michael Caine, dapper and winning, pops up periodically as Isabel's father, but there isn't nearly enough of him.

At least we have Kidman, who looks smashing in her wardrobe of Easter egg-colored cardigans and '50s-style crinoline skirts, but who also delivers her lines (even the most ridiculous ones) as if the overstuffed travesty around her were actually a model of subtlety. Kidman borrows Marilyn Monroe's breathy "Mr. Pwesident" delivery, without making it seem like a stunt. In an early scene, Isabel is crestfallen when a real-estate agent, after showing her her dream house, requests references: "I don't have any of those," she coos, her eyes widening to the size of kiddie pools (before tugging on her ear, the equivalent of the Elizabeth Montgomery nose twitch, to make the agent forget she'd ever asked for references in the first place).

Like most actors who have earned the dubiously significant adjective "serious," Kidman doesn't get to do many comedies. Her performance in "Bewitched" is the only thing in the movie with a gossamer touch -- her face has a marvelously appealing capacity for registering wicked delight. At one point, finally pushed to the breaking point by Jack's selfish behavior, she unleashes a dirt-devil storm of invective. When Jason Schwartzman, who plays Jack's sleazy, smooth-talking agent, Richie, tries to intercede, she fixes him with a hypnotic garden-snake glare: "You be quiet or I'll give you a tail!" Her voice is as soft as ever, but it's also shot through with rainbow thunderbolts. Richie blanches and retreats, as any sensible mortal would. Kidman will have the last laugh; not even Ephron, with her dumb flying house of a movie, can crush her magic.