In this exuberant work by America's best under-celebrated novelist, the story of a young lesbian historian, her mathematician lover and exiled father are interwoven with the fantastic lost novel by a famous Romantic poet. 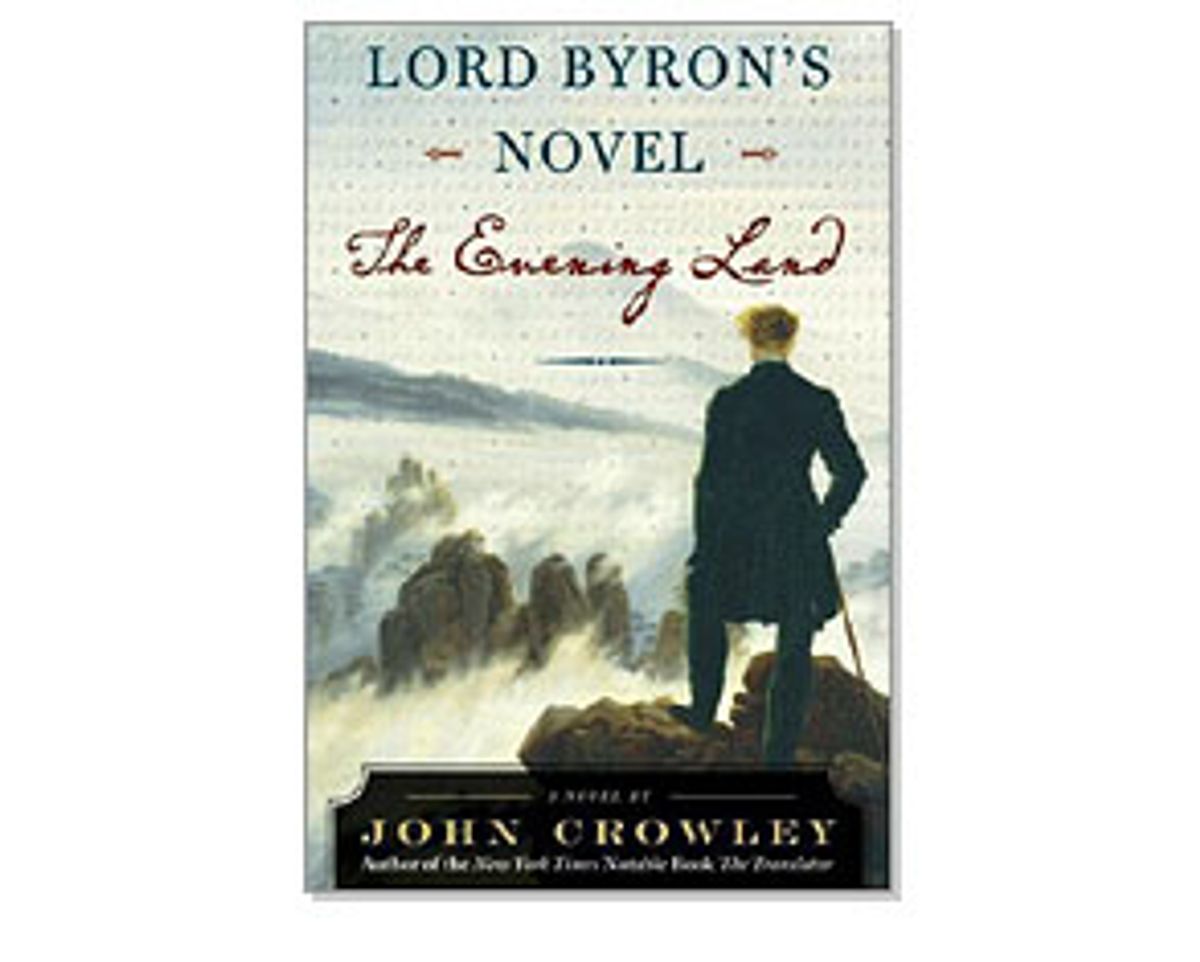 George Gordon, Lord Byron, has suffered a peculiar posthumous transformation in reputation. Few people still relish the epic poetry that made him famous in his early 19th century heyday, and now he's best known for the quality of his fame. He and his fellow Romantics, the clichi goes, were the rock stars of their era, and Byron was especially charismatic, a hybrid of Mick Jagger and Jim Morrison. Today, more people can quote his one-time lover, Lady Caroline Lamb, describing Byron as "mad, bad and dangerous to know," than can recite any lines from his own work.

John Crowley, who is surely America's best under-celebrated novelist, takes up the parallels between the Romantics and the counterculture of the '60s and '70s in his exuberant new book, "Lord Byron's Novel: The Evening Land." The premise, a bit like that of A.S. Byatt's "Possession," has a set of contemporary characters discovering a lost manuscript by a past literary giant, in this case the novel that Byron at various times talked about writing but presumably never did.

The modern characters -- a young lesbian historian, her mathematician lover and her father, a filmmaker in exile since the '70s after a scandal involving an underage girl -- appear entirely via their e-mails to each other. These alternate with sections of the novel and footnotes to it, written by Ada Byron, Countess of Lovelace, Byron's daughter and the author of what many consider to be the first computer program. (An early programming language is named after her.) In Crowley's fiction, she obtained her estranged father's novel and, while bound by a promise to her mother to burn the manuscript, also created an encoded copy for posterity.

"The Evening Land," Crowley's version of Byron's unwritten novel, is an extravagant gothic tale, beginning in the mountainous wilds of Albania and careening through a crumbling Scottish manse, the fleshpots of London, the slave plantations of the Caribbean, the decadent high society of Venice and back again to tribal Albania. The story's hero, Ali, is the bastard son of a cruel and profligate Scottish laird. He suffers through a series of misfortunes -- forbidden love, ostracism by peers, an unsympathetic wife, an unearned reputation for wickedness, and finally exile -- all echoing events in Byron's own life.

Alexandra "Smith" Novak, the historian, stumbles on the encoded manuscript while researching Ada, and this precipitates her first real contact with her father, Lee, once a Byron scholar. The parallels between Lee and Byron are plentiful, so much so that at one point, Crowley has Lee stipulate, "We're not alike, though I confess I like him ... I can apprehend him as a human person, and in that apprehension understand myself as human." However, the movement of both stories, the rapprochement between a daughter and her vilified father, suggests otherwise.

You get the impression that Crowley also finds Byron sympathetic, a sympathy made easier by the fact that Byron's worst "sin" was a consensual affair with his half-sister. Lee is a somewhat tougher case. Like Byron, he is a brave soul inclined to throw himself behind good causes (Byron died fighting for Greek independence; Lee makes documentaries about resistance movements in East Timor and New Guinea), but prone to self-pity, vanity and occasionally self-serving interpretations of "liberation."

The point being that, however real and serious the excesses of the 20th century's counterculture may have been, much of its idealism, like Byron's, was also "honorable and generous" and worth preserving. Ada and Smith play the double role of the skeptical daughters trying to salvage the good from their father's legacy in less indulgent times.

The villains, as Lee sees it, are types like Ada's mother, a Victorian "monster" counterpoised to the Romantic monster she made Byron out to be, a "soft-spoken, self-controlled, bombazine-clad mass of self-deception, self-righteousness, appalling mental cruelty passing under the name of religion, morality, 'higher' feelings and 'pure' motives" -- which ought to sound familiar enough to contemporary readers. (When Lee unjustly tries to cast Smith's gentle, loving hippie mother and her "feminist" friends in this role, too, Smith nearly bites his head off.)

"The Evening Land" itself is spookily like Byron's other prose writings, and wholly plausible as the work of his pen. (I can't resist, though, registering a fan's tiny objection that Crowley is a better novelist than Byron could have been, and I do miss his voice here.) The author's sensibility nevertheless does seep through; like all Crowley novels, this one has a tinge of the mystical, the hint of mysterious forces at work. His fictional Byron prefigures the death and cremation of Shelley in "The Evening Land" and has inklings of Crowley's own work when he muses, "for that is the way of Life, to begin (or continue) one tale, even as another runs out -- even as wave follows wave, and wave returns on wave." Sometimes, though, the next tale is even better.