Karl Rove is a liar 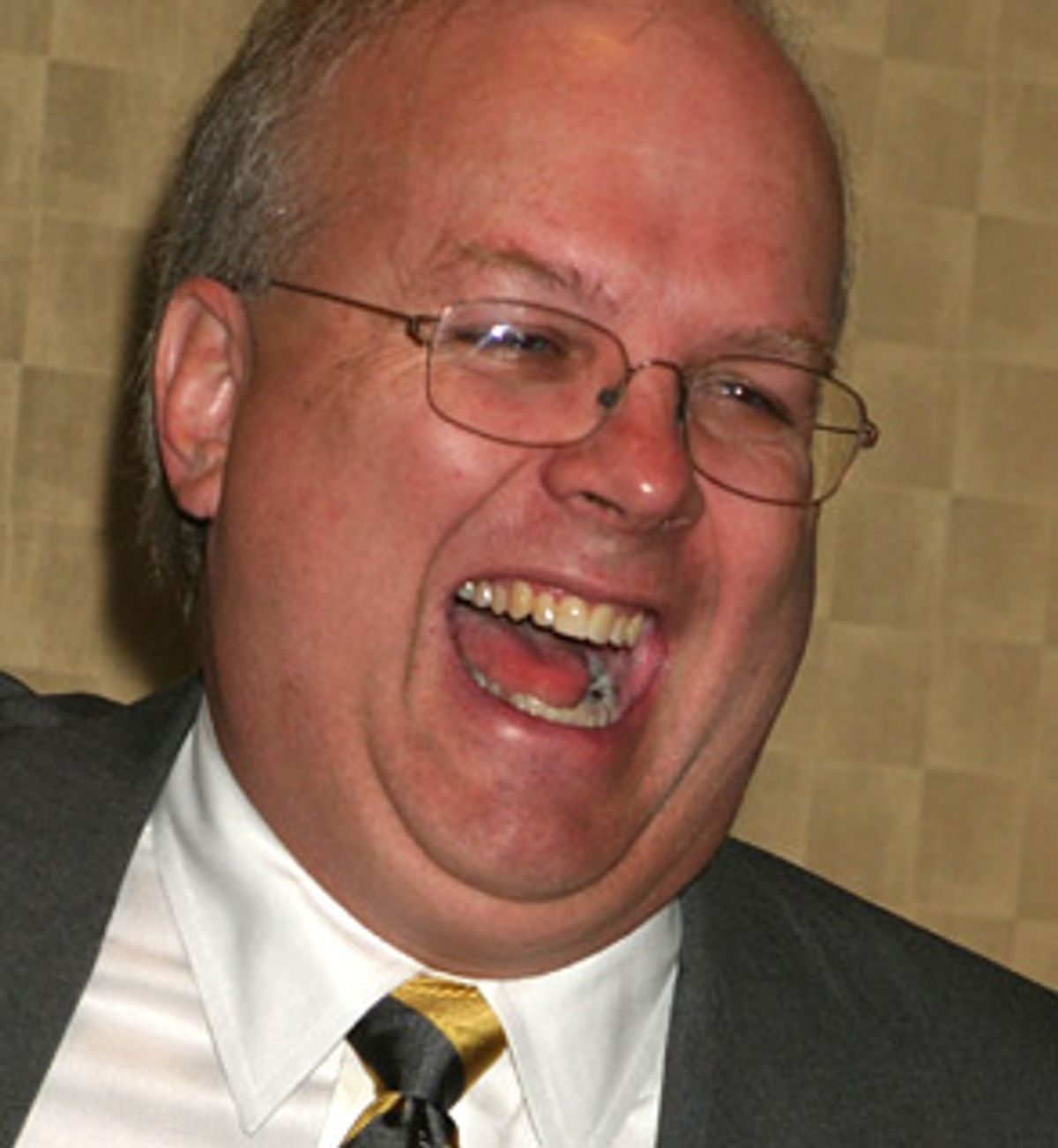 Karl Rove is a liar and a scoundrel. He is not a patriot but a pure partisan, as his own record proved long before now.

The other night Rove lied about the liberal reaction to the Sept. 11 attacks and again exploited patriotism for narrow partisan advantage in a time of war. He seeks to divert public opinion from the failures of the Bush administration by suppressing dissent, stigmatizing "liberals" and returning to the same old tactics that the Republican far right has used ever since the McCarthy era.

His unhinged rhetoric is a sign of deep worry within the White House, of course, as polls continue to show deepening public alienation from the president and growing skepticism about the war in Iraq. Most Americans now understand that they have been deceived about the war from the beginning, and most doubt the Bush administration's strategy for extricating our troops. Moreover, Rove must cope with Republicans as well as Democrats who are openly dissenting from the administration line, not only regarding Iraq but on the Bolton nomination and Social Security privatization.

Evidently Rove believes that demonizing Democrats and liberals will distract the nation from the Bush administration's failures. That tactic has certainly served him well in the past, when he managed to divert attention from the failure to deal with the terrorist threat before 9/11, the failure to speak honestly about the alleged threat from Iraq and the failure to plan intelligently for the Iraq invasion and its aftermath. We have paid an enormous price for those failures, yet cynical Rove still thinks he can convince us that this is all the fault of "liberals."

As a New Yorker who stood on my street and watched the Twin Towers fall, I take strong personal exception to Rove's ugly slander against "liberals." According to him, liberals "saw the savagery of the 9/11 attacks and wanted to prepare indictments and offer therapy and understanding for our attackers." That broad-brush smear is false, and Rove knows it.

The truth is that liberal New York -- and the vast majority of American liberals and progressives -- stood with the president in his decision to invade Afghanistan and overthrow the Taliban. On the day of the attacks, I wrote a column that endorsed "hunting down and punishing" those responsible because the dead deserved justice -- and noted that when the culpability of Osama bin Laden and the Taliban was established, the United States "is fully capable of dealing with them."

Six weeks after 9/11 and two weeks after the United States started bombing the terrorist camps in Afghanistan, I appeared on CBS's "Early Show" to support the Bush administration's actions. Correspondent Lisa Birnbach made the point that liberals and Democrats who had once opposed the war in Vietnam were standing shoulder to shoulder with a president they didn't much like (and, although she didn't mention it, whose legitimacy they continued to doubt).

Noting the ubiquitous presence of American flags as we walked around the very liberal neighborhood where I live, Birnbach said, "This old lefty [Conason] is suddenly siding with the White House."

Responding to her question about the U.S. war against al-Qaida and the Taliban, I told Birnbach: "I'm not going to say I agree with every policy this administration will pursue, but so far, so good." Although she sounded surprised, the fact is that I was scarcely alone on the liberal left in expressing those sentiments.

In the aftermath of 9/11, liberal Democrats on Capitol Hill stood proudly with conservative Republicans to pledge their support for military action against al-Qaida and the Taliban. The wobbly weakness of George W. Bush's initial response to the terror strikes went unmentioned, as did anything else that might hint at dissension at a moment of crisis. When Bush delivered his powerful speech to a joint session of Congress on Sept. 20, 2001, he won standing applause across the bitter divide left by the 2000 election. For the first time in memory, Democratic congressional leaders declined free airtime to answer a Republican presidential address.

"We want America to speak with one voice tonight and we want enemies and the whole world and all of our citizens to know that America speaks tonight with one voice," said Rep. Richard Gephardt, then the House Democratic leader. "We have faith in [Bush] and his colleagues in the executive branch to do this in the right way."

Tom Daschle, then the Senate Democratic leader, stood with his Republican counterpart, Trent Lott, to show bipartisan support for the president. "Tonight there is no opposition party," said Lott. "We stand here united, not as Republicans and Democrats, not as Southerners or Westerners or Midwesterners or Easterners, but as Americans." Daschle echoed Lott: "We want President Bush to know -- we want the world to know -- that he can depend on us."

Even Rep. Maxine Waters, the liberal Los Angeles Democrat who at the time was among Bush's toughest critics on the left, praised him without reservation. "He hit a home run," she said. "We may disagree later, but now is not the time."

Among the other liberal journalists who backed Bush was Jacob Weisberg, now editor of Slate magazine, who has published several volumes mocking Bush's difficulties with the English language.

Weisberg said then, "He was very shaky at first, but I resisted the urge to write a piece saying that, because I didn't think it was appropriate ... Bush deserves the benefit of the doubt to an enormous degree. He needs to rally the nation. I want to contribute to that effort to the extent that I can."

But we now know that even then, at the peak of national unity, Rove was planning to make suckers of the Democrats and liberals who had spoken out in support of the president. He didn't care about bipartisan cooperation, or about the benefit of the doubt that Democrats had given Bush. He behaved as a partisan, not a patriot.

Rove would soon discard the inspiring presidential rhetoric that had joined Americans across race, religion and ideology. The slogan of a nation at war that blossomed on billboards, bumper stickers and storefronts -- "United We Stand" -- was no longer operative.

Or so Rove explained to his fellow "patriots" at a closed meeting of the Republican National Committee during their winter conference in Austin, Texas. Less than four months after Bush's Sept. 20 address to the joint session of Congress, he was scheming to win the midterm elections by transforming the "war on terror" into a war on Democrats.

"We can go to the country on this issue, because they trust the Republican Party to do a better job of protecting and strengthening America's military might and thereby protecting America," he said. Provocative as those remarks were, they were mild compared with the kind of slanders that ensued against Daschle -- who was paired with Saddam and bin Laden -- and many other Democratic candidates.

So when vicious little Ken Mehlman, the RNC chairman, claims that Rove was referring only to Michael Moore, he's lying too. I expect no apologies from either of them or their bullying supporters. They should expect none when those they have insulted and betrayed tell them what they are.