Part literary fiction, part social satire, this genre-bender from the author of "The Book of Revelation" offers a unique look at modern Britain. 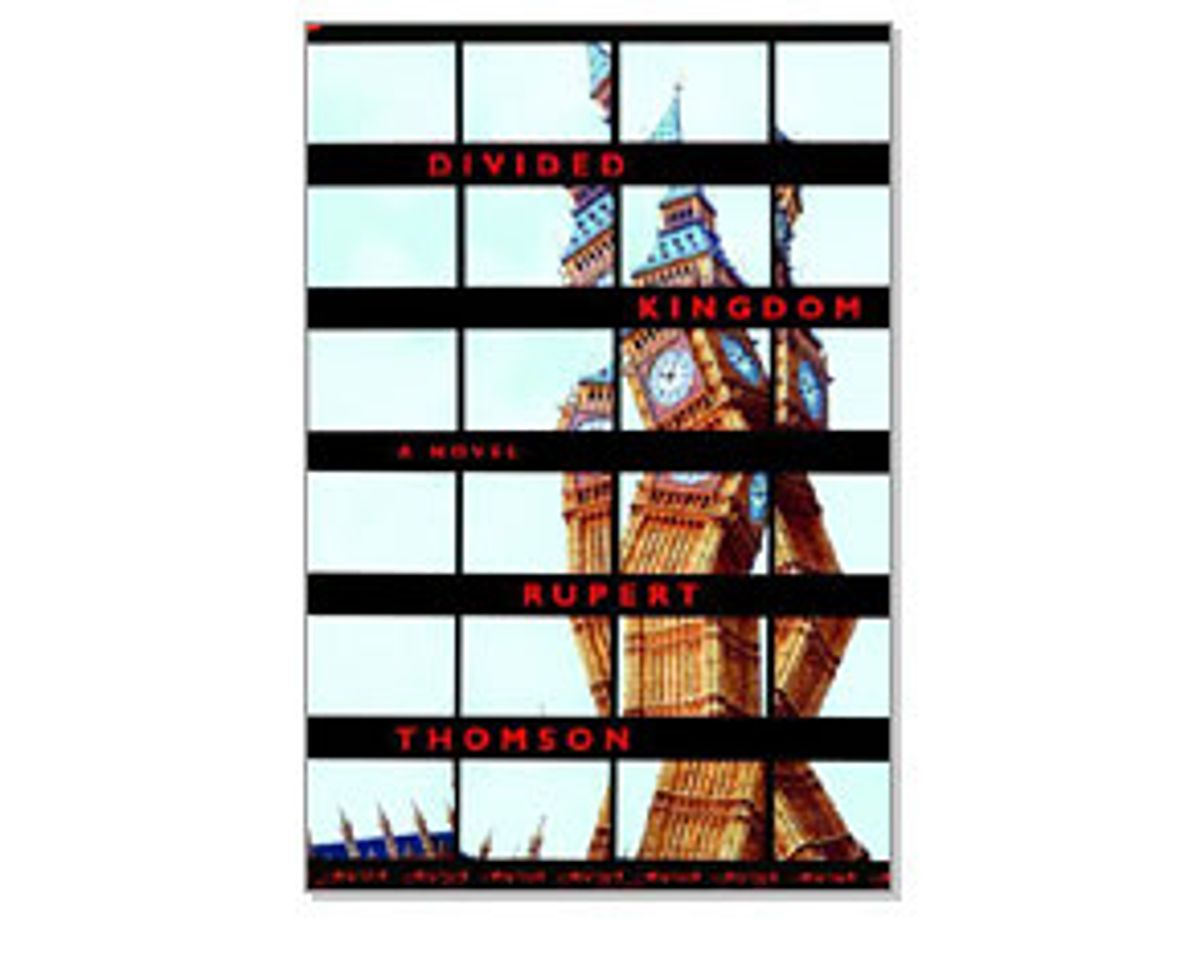 If you're already a fan of Rupert Thomson's novels, all I have to tell you is that he has a new one. You'll understand already that it won't fall readily into any known literary genre, but that it'll crackle along like a thriller (in this case, a sci-fi thriller of sorts), driven by sharp and luminous writing. You'll also know that in the end there'll be something mysterious about it, as if its exciting events and characters are just a sort of smokescreen for something deeper and scarier still.

If you don't know Thomson's work yet, that's a sad commentary on the state of our literary culture. In another era, the unclassifiable author of such previous volumes as "The Book of Revelation," "Soft!" and "Air & Fire" might have been rich and famous, like, say, Aldous Huxley, his most obvious literary ancestor. Thomson has one foot in literary fiction and one foot in social satire, the way Huxley did, and like Huxley he's an Englishman in exile (Thomson lives in Barcelona) who writes about his homeland with a combination of lyricism and disgust.

For my money, "Divided Kingdom" is Thomson's best yet; it might, in fact, be his "Brave New World." As the title suggests, this is a novel about Britain, but the words "Britain" or "England" never appear (poor old meaningless Queen Elizabeth is mentioned once, if not by name). In the divided kingdom where Thomas Parry grows up, the old names are not used anymore -- in fact, Thomas himself used to have another name, before men with guns dragged him out of his parents' house one night when he was 8 or 9. Like many other young people, he was subjected to the Rearrangement, in which the population was divided into four quadrants and kept apart with barbed wire, fortified walls and a vicious enthusiasm reminiscent of the Soviet empire at its peak.

"Divided Kingdom" is more a fantastic work than a realistic one; despite its family resemblance to other recent British dystopian fiction (such as Kazuo Ishiguro's shattering "Never Let Me Go") Thomson isn't asking you to consider his Rearrangement soberly. You see, the citizens of this balkanized kingdom are not divided by race or religion or intellect or genetics or any other shibboleth of our era. Rather, they're split up according to the ancient Hippocratic theory of the "humors": angry "cholerics" in the Yellow Quadrant, gloomy "melancholics" in the Green Quadrant, and so forth. It's a ridiculous concept, but Thomson turns it into a richly imagined picaresque adventure -- and after a while you'll start wondering if it's any stupider than some of the social-science constructs of our day.

Writing episodic yarns with large and varied casts of characters is something of a lost art in high-end fiction, but Thomson has a natural-born storyteller's shameless gift for it. Thomas grows up and becomes an important bureaucrat in the Red Quarter -- the progressive, optimistic zone of the "sanguines," almost free of crime and pollution -- and then sets out on an illicit Alice-in-Wonderland odyssey, traveling alone to almost every corner of his disunited country.

While traveling to a conference in the Blue Quarter, where the doleful, spiritual "phlegmatics" live, Thomas visits a strange nightclub called the Bathysphere, and here his story, and "Divided Kingdom," begins to move in a mystical, perhaps symbolist direction. Fueled by the oddly realistic visions the Bathysphere conveys -- visions of the life he and his country have left behind -- Thomas embarks on his underground pilgrimage, meeting a brilliantly sketched panoply of characters along the way. These range from the worldly Mr. Vishram, Thomas' boss at the Department of Transfer and Relocation, to cryptic Blue Quarter secret agent Walter Ming, jodhpur-wearing Yellow Quarter rebel Fay Mackenzie, and Brendan Burroughs, Thomas' Green Quarter housemate, who is convinced he is made out of butter (and hence may melt or go rancid).

As in any thriller worth its salt, there are unattainable women too, from Thomas' stepsister Marie, his not-quite-incestuous first love, to a copper-haired, freckled girl named Odell Burfoot, who can actually make herself invisible. As Thomas' story becomes more phantasmagorical, Thomson borders on the territory of Stephen King or, more precisely, Mervyn Peake. Thomas sees a blackened, fire-breathing man who may be the Devil himself (or one of his minions) and for a time joins the White People, a voiceless, abused, seemingly primitive group of telepaths who cross from zone to zone but belong to none of them. Thomson handles these more fantastic elements so skillfully you may feel you're reading two novels simultaneously, one an almost-realistic adventure story and the other to be considered as an extended dream narrative or metaphor.

One way of understanding "Divided Kingdom" is to suggest that all four of its zones represent contemporary Britain as seen through a different satirical scrim: The Yellow Quarter is violent, vulgar America-lite, while the Blue Quarter is a brooding, mystical nation of witches and pagans, and the Red Quarter belongs to sensible, upper-middle Labor Party voters. (And the Green Quarter is very clearly the bleak and shabby Britain of the postwar years.)

Yet if Thomas' odyssey is sometimes comic it is also and always tragic. I'll leave it to British readers to decide how much "Divided Kingdom" reflects the psychic wounds of modern Britain, but Thomas' exaggerated narrative is really more universal than that. Like many Thomson protagonists, he feels cut off from his own past, his family and his childhood, and can't figure out how he became the person he is now. For many of us in the so-called real world, that remains a problem -- whether we're sanguine, phlegmatic, choleric or melancholy.