Too damn little, too damn late

Senators can take their half-assed lynching apology and shove it. 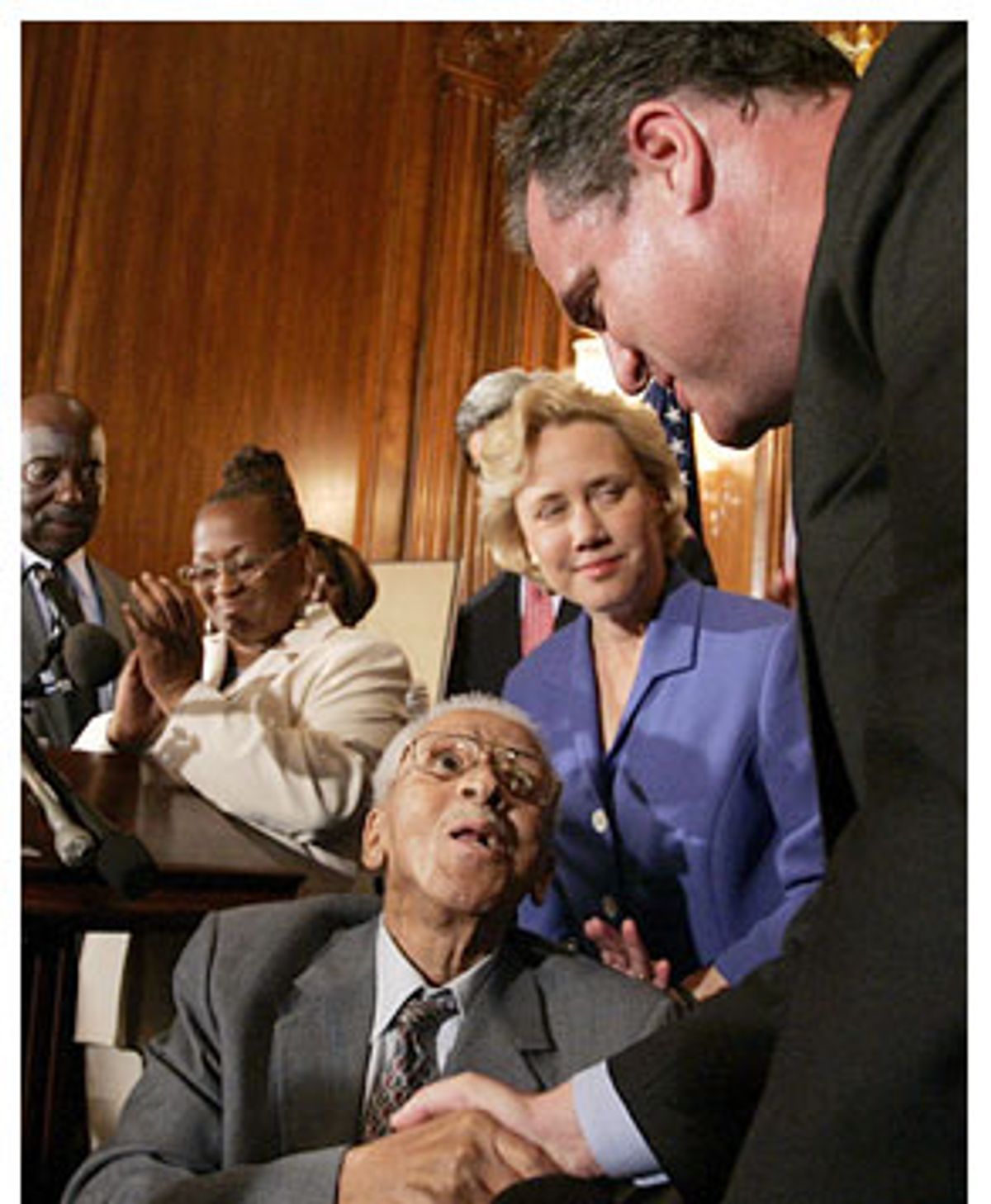 You were expecting, maybe, gratitude for your lynching apology? You should live so long. Here are my top 10 reactions to America's latest patronizing attempt to repent its racism:

2. Damn right, the least you could do.

4. Gee, couldn't you have waited just a little longer -- until even the trees from which the "strange fruit" swung were dead?

6. Thanks for kicking our asses so hard, and for so long, that we were forced to develop entire art forms around our oppression.

7. Try not to break your arm patting yourselves on the back.

8. Give us back the land, the businesses and the unpaid debts that were the true cause of many lynchings. You sleaze bags!

9. Gee, was there no appropriate Hallmark card? Let a sister help you out:

Sorry I castrated your granddad. My bad.
What's 300 years of raping your ancestors among friends?
Sticks and stones may break your bones ... Oops. They already did.

And my topmost reaction to your lame-ass, late-ass lynching apology:

10. Thanks for absolutely, positively nothing. You feel better. We feel worse. Déjà bloody vu all over again.

Here's the problem with apologizing for stuff like slavery, Jim Crow laws and lynching -- and the problem with digging up Emmett Till or prosecuting Edgar Ray Killen, an 80-year-old man, for murder 41 years after it happened: It's too damn little, much too damn late. Does America's contempt for us never cease? How else to describe the refusal of 15 senators to cosponsor the lynching apology bill, and its late-night voice vote? For all we know, the bill was passed by one lonely, overcaffeinated senator who happened by in search of an Ambien. We aren't sure which senators voted for the bill and which voted against it. An accident? I think not.

Sen. Robert Byrd can apologize again and again for having been in the Ku Klux Klan and for having fought tooth and nail against every civil rights bill that came down the pike. The military can give posthumous medals to black World War I, World War II and Korean War veterans who are long dead and not around to describe the racism they faced under fire. And, as of June 13, some -- but not all -- senators can apologize for taking 105 years to pass an anti-lynching bill.

The crux of the matter is this: Had America ever truly repented its racism, no apology would be needed now. Our schools and neighborhoods wouldn't be segregated. The term "driving while black" need never have been coined. Oprah, who routinely graces the list of America's most admired people, could shop in an "upscale" neighborhood without a camera crew to mark her as a "daylight white." The words "black" and "white" would be as giggle inducing as "23 skidoo" and "Chi-town."

So I'm with the lynching descendant who said: "I won't accept their apology ... What they used to do with a rope, today they do with a paper and pencil." And that's why we reject the apology: It's insincere. You either pity us or hate us; either way, we're still "other." Half-assed apologies like this take the place of actual progress, of actually embracing and accepting us.

And now that we've gotten our empty apology, the question isn't how blacks feel, it's how whites do. Shamed? Guilty? Bored? Patronizing? Victimized? Shriven?

Bored and patronizing, I think.

Shove your apology and kiss my unforgiving ass.