Monday's ruling against Grokster will do nothing to stop peer-to-peer file sharing -- but it may well stifle technology innovation. 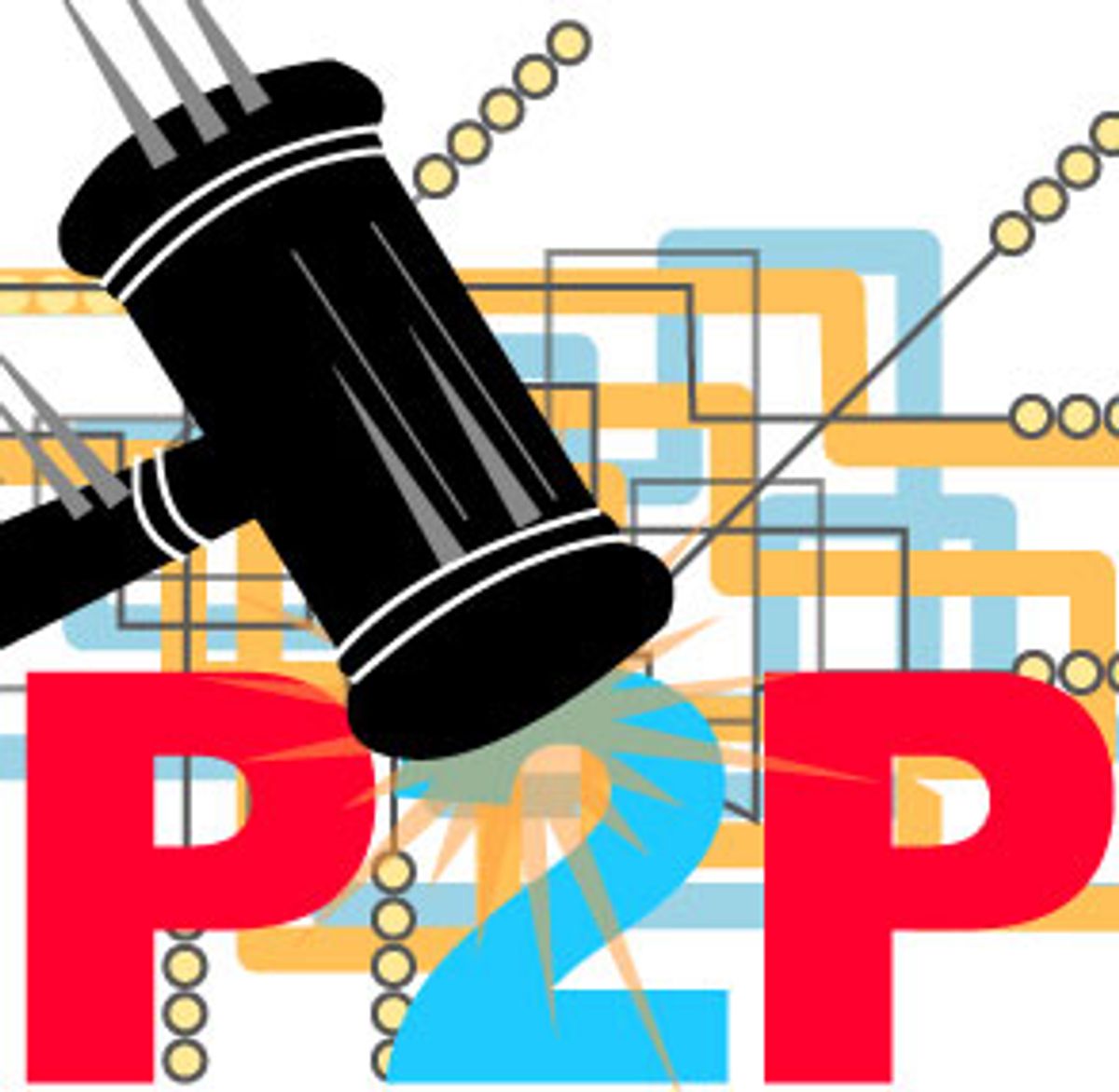 Note to technology developers who want to market products that will help people share copyrighted files: Whatever you do, don't end your brand name with "-ster"!

On Monday the U.S. Supreme Court issued its long-awaited decision in the case of MGM vs. Grokster. In this case, the major movie and music companies sued Grokster and StreamCast, two companies that produce peer-to-peer interface software that enables users to share music and video files. Writing the majority opinion, Justice David Souter cited Grokster's very name -- "an apparent derivative of Napster," a company the court characterized as "notorious" -- as evidence of a marketing strategy in which Grokster had knowingly induced massive copyright infringement.

So just to be safe, maybe all companies should send a message to their customers like the one Apple does with its iPods? You know, those stickers and signs that wink at you while admonishing, "Don't steal music"?

Back in 2001 a federal court ruled that Napster, the first successful commercial peer-to-peer file-sharing software, had contributed to the infringement of millions of songs. But there is a big difference between Grokster and Napster. Napster's computers monitored who was offering and downloading what. It had a centralized index of users and files. Grokster and Morpheus (StreamCast's version of the same idea) instead left the indexing to the users themselves. Grokster's lawyers argued that in this case the company could do nothing to stop users from sharing music and wasn't responsible for any infringement.

In August 2004 the 9th U.S. Circuit Court of Appeals agreed, upholding a previous district court ruling, and saying that, like Sony's Betamax videocassette recorder 20 years ago, Grokster and Morpheus were not illegal technologies because they could be used for legal activities such as sharing works from the public domain. And because, unlike Napster, which had the capability to track individual users, the companies could not be held responsible for what individuals did with the software.

Overall, Monday's Grokster ruling is a middle-ground decision about a territory that has no middle ground. Souter and the court have issued a Solomon-like decision that will do no good for the plaintiffs, do no harm to infringers -- and could have profoundly negative effects on future innovators of technology.

The decision is a clear loss for Grokster and StreamCast, two companies that set out to be "the next Napster." But it's hardly a loss for copyright infringers and open-source peer-to-peer software developers: More than 100 million working copies of peer-to-peer interface software run on computers all over the world. And amateur programmers are doing much of the best work out there today anyway. A 9-0 decision sounds like a slam-dunk for the copyright industries -- but don't for a moment think that this decision, under any circumstances, will curtail the practice of downloading copyrighted materials.

The peer-to-peer phenomenon is often miscast as the proliferation of a radical set of technological tools meant to steal music. But the fact is, the Internet is fundamentally peer-to-peer. All that Grokster, Kazaa, or LimeWire do is let you efficiently search for keywords of content that sits on other people's hard disks. If you have a problem with peer-to-peer you have a problem with the Internet. And short of shutting it down or radically reengineering it, there is nothing that Hollywood or Washington can do to stifle the file-sharing capabilities of those who use the Internet. Regardless of Monday's decision, the software, music and movies will keep on flowing.

But the grand innovations in American technology may not. If the lower courts read the court's ruling broadly, watch out: This could severely restrict other, more important innovations for decades to come. Even without broad readings, the courts could soon be filled with frivolous copyright suits against technology companies -- handing big entertainment companies like MGM a potent economic weapon to wield against smaller innovators and upstarts that are developing new devices and models of distribution. Souter struggled to construct a decision that would not impede the inventor in her garage who is tinkering away at the next great thing. The problem is, she will definitely have to hire a lawyer now.

The ruling is an odd one, and it opens the door to broad interpretation. On the whole, the court did nothing to refine or limit the landmark Sony case. Back in 1984 the Supreme Court, after years of anxious deliberation, ruled 5-4 that the videocassette recorder was legal. The Motion Picture Association of America was convinced that by allowing individuals to build their own libraries of recorded television shows the movie business would go broke. The court, fortunately -- but just barely -- disagreed. The majority (with Justice John Paul Stevens writing the opinion) ruled that because the Betamax VCR had "substantial non-infringing uses" Sony (then just an electronics company and not yet a movie studio) would not be liable for the infringement it encouraged all of us to commit.

Since 1984, hardware and software industries have flourished because they assumed that they could invent cool stuff -- Internet browsers, CD burners, MP3 players, personal computer operating systems -- that are constantly used to infringe copyright. Yet because each of these had "substantial non-infringing uses," they could be insulated from judgments. In large part, we can thank the court's decision on the Sony case for the technological and creative revolutions of the past 20 years.

Now, Souter wanted to preserve the Sony decision yet introduce a new reason to rule against companies boasting that customers could use their products to infringe on copyrighted material. Souter is convinced he saved the Sony standard and technological innovation in general by focusing on acts that "induce" people to infringe. "The inducement rule, instead, premises liability on purposeful, culpable expression and conduct," he wrote. To demonstrate that Grokster and StreamCast induced infringement, Souter considered how the product was conceived and distributed, how it was advertised, and even what inspired Grokster's name.

But it's not at all clear that the next big case won't completely undermine the Sony decision and retard innovation, investment and risk-taking. The next company to be sued likely will not make the mistake of marketing its products as "the next Napster." But will courts stretch the "inducement standard" established by this case to include clever marketing? And what about the other devices that let us copy stuff?

Given a marketing-based standard of inducement, how would Apple fare if it were sued for making powerful copying and distributing machines like the computer on which I am now typing? When Apple sold it to me, it told me I could "Rip, Mix, Burn" anything I wanted. And so I do. And check out this Sony ad from back in the early 1980s. Inducement, anyone?

Souter also cleared the way for another disturbing potential effect: mainstream business models could now be subject to judicial review and could be considered evidence of inducement. Souter wrote of StreamCast: "As the record shows, the more the software is used, the more ads are sent out and the greater the advertising revenue becomes. Since the extent of the software's use determines the gain to the distributors, the commercial sense of their enterprise turns on high-volume use, which the record shows is infringing."

This is poses a real problem for any software company or Web-based business. As Princeton computer scientist Ed Felten explains: "It's hard to think of any conceivable business model for a software company under which an increase in use of the product does not lead to an increase in revenue. If you sell software, greater use allows you to increase the price, or to sell more units. Likewise if you sell software by subscription. If you give away the software and make money on auxiliary products or services, you'll still benefit from increased usage."

Felten justifiably fears that the court has just opened the gate for courts to do all kinds of second-guessing about technological and business design decisions.

What about Google? Consider this: Google, like Grokster, is primarily a search engine. Its business model relies on advertisements. And the more we use Google, the more money it makes. Like Grokster, Google resolves communication queries. It generates a link from an information provider to an information seeker. And almost all of what it delivers is copyrighted.

The fact that no major copyright industry player has brought Google to court so far is merely a function of the fact that most copyright holders want Google to index and offer links to their materials. There is no explicit contract. You have to opt out of the Google world.

But there is one major difference between Grokster and Google. Grokster does no copying itself. It merely induces and enables.

If anyone infringes, it's Google: The company caches millions of Web pages without permission (again, giving copyright holders the option of protesting). And soon it will offer millions of copyrighted books in electronic form without payment or permission. How would Google fare in a post-Grokster world? The publishing industry no doubt wonders. And it just might sue to find out.

The Grokster decision offers little clear guidance on this question. As Temple law professor David Post asks: "Can you be liable for distributing file-sharing software if you are NOT actively inducing/encouraging/promoting its use for infringing purposes? Three Justices (Ginsburg, Rehnquist, Kennedy) say: Yes, you can, if the product is primarily used for infringement. Three of the Justices (Breyer, Stevens, O'Connor) say: No, you can't, as long as there's evidence that the product is capable of being used in a non-infringing way."

We all dig Google. We would find it frustrating to navigate this big thing known as the Web without it. But if you are reading this online, then you are enjoying peer-to-peer technology and making a copy of a copyrighted work.

Who knows what other great copying and sharing technologies are just around the corner? How much of it will be held back on advice of counsel?

This is why courts and legislatures should be very careful when regulating technological innovation and copyright: Broad rules and legal uncertainty can put a chill on, or even wipe out, really useful and important developments.

Siva Vaidhyanathan is an assistant professor of culture and communication at New York University and the author of "The Anarchist in the Library: How the Clash Between Freedom and Control Is Hacking the Real World" and "Crashing the System" (Basic Books, 2004).