The Williams sisters became the brilliant icons that tennis needed. But their obsession with stardom is spelling the death of their game. 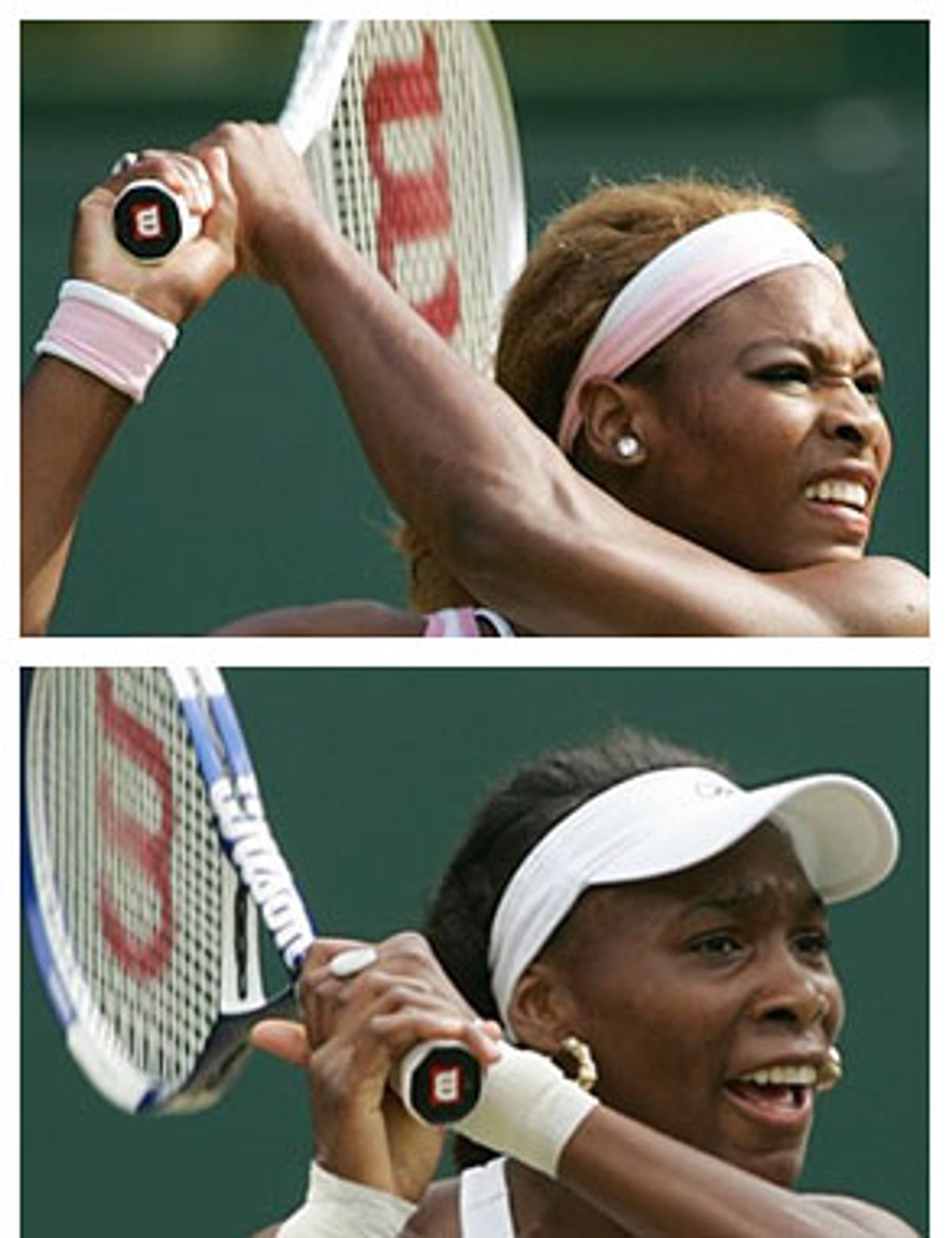 It was just past 9 p.m. on a windy, chilly Saturday, when two-time Wimbledon champion Serena Williams lost the first set to 85th-ranked Jill Craybas, a 10-year tour veteran who's not even a household name in her own house. The match was being played on Wimbledon's Court Two, a 2,192-seat bandbox with such a long-standing history of upsets (Jimmy Connors, John McEnroe, Andre Agassi and Pete Sampras among the notable victims) that it's dubbed the Graveyard of Champions.

There are no lights at Wimbledon, so as darkness descended, each played with exceptional urgency, Craybas hoping to end it, Serena eager to snare the set and conclude the match another day. Playing steadily but hardly brilliantly, Craybas exploited Serena's lack of fitness, mobility and consistency to earn the match of her life. It was Serena's earliest exit from one of tennis's four Grand Slam events in six years. Then she was merely 17, aspiring royalty. Now she is 23, a veritable tennis queen. As recently as two years ago, she'd won this title and was ranked No. 1 in the world. But to many tennis insiders, she's now a deposed ruler at best.

A similar plot line has occurred with Serena's older sister, Venus. Although her win over Mary Pierce Tuesday puts her in the semis with a pretty good shot to win the tournament, at the tender age of 25 Venus is regarded less as a dominator and more as a player who's spent three years off center stage and will likely stay there for the balance of her career. In other words, she's become a sentimental favorite. "It's a shame," says ESPN analyst Mary Carillo of the sisters' eroding skills. "Athletes have only so many Sundays."

Echoing Carillo, the legendary Billie Jean King says, "They haven't wanted to pay the price." To King, neither sister is willing to make the necessary upgrades to match supremely driven and talented young players like Maria Sharapova. Self-reliance and discipline are particularly vital in a sport where players are left on their own to improve their games. Serena and Venus are still coached by their parents (their father Richard learned the game mostly from magazines and videotapes), repeatedly resisting opportunities to gain input from others who might salvage their rather awkward strokes and confusing strategies. Their technical, tactical and physical limitations become more apparent with every match they play. "It's harsh reality TV to watch Serena and Venus now," Carillo says. "They had everything to dominate. They just didn't take care of it. They created opportunities for themselves away from tennis -- and decided to pursue them."

Four years ago, Serena and Venus graced the cover of Time magazine. "The Sisters Against the World" read the headline. Their ascent was arguably one of greatest stories in the history of sports. From the ghetto of Compton, Calif., Richard taught them how to simultaneously hit the ball and hit the ground during drive-by shootings. Not just one but two girls emerged as champions in a sport long perceived as the province of the white and the wealthy (even if the great players mostly came from middle-class families).

Check out this stat: Not once in the 20th century did two sisters meet in the singles finals of one of the sport's four prestigious Grand Slam events. But by the summer of 2003, Venus and Serena had played in six. As one of their rivals, Lindsay Davenport, noted, "It's as if Tiger Woods had a brother chasing him in Augusta." From Watts to Wimbledon, tennis braced itself for a revolutionary impact. Surely these two were the Messiahs who would rescue the sport for its sins of waste and elitism, deliverers who could simultaneously take tennis to the people and leave a legacy of excellence.

Fittingly, in our buzz-happy media age, once the sisters reached the top, their handlers preferred speaking of them not strictly as athletes or even celebrities but as brands, as if they were bars of soap that could simply be manufactured into prominence. Invariably, fame offered its perks. Serena most of all enjoyed preening. She made the scene at awards shows and movie premieres, bought a condo in Los Angeles, began to take acting lessons, started dating a film director, and spent less time in her interviews talking about tennis and more about her life as a star, her football picks and her sizzling Web site. Venus, less vain and visceral, more withdrawn, launched her own interior design company.

There's a gene in tennis's DNA that breeds confusion between the authenticity of competition and the artifice of commerce. As an individual sport, tennis often lives and dies on the crossover appeal of its stars. Barry Bonds can miss a whole season and fans will follow the San Francisco Giants. But tennis's roots as an exclusive sport make it mandatory for top players to do more than let their racket do the talking. Pete Sampras, as accomplished an athlete as Tiger Woods, Michael Jordan or Wayne Gretzky, was often unfairly blamed for the sport's eroding popularity because he allegedly lacked the personality the game needed to spark interest.

So even as the sisters' talk of outside interests bordered on self-absorption, they were becoming the icons the sport needed. "I don't know anything about tennis," a grocery clerk told me a year ago, "but those sisters are sure kicking ass." As long as they kept winning, who dared dispute the approach? "There is no single way in tennis," says former world No. 1 Jim Courier. "That's one of the reasons you play a sport like tennis. You want to show you can do something your own way rather than have some coach breathe down your neck."

The Williams family brought individualism to new heights. After Venus, at age 11, spent less than a year in junior competition, Richard refused to let her enter a tournament until she turned pro three years later. Serena played even fewer junior events. That both were able to rapidly compete effectively in the pros was akin to a baseball player going from Little League right to the majors.

But now the Williams family's tennis history appears less a sustainable franchise and more an interim boutique. Over the course of the last year, both Serena and Venus have failed to assert themselves with consistency or prowess.

Tempting as it is to cite their injuries as the reason for this, let's take a keener look. These days, both tactical gurus and technical experts often watch the sisters in horror. Though both are superb fighters, neither appears too aware of the need to alter game plans or do much more than slug their way through points. On the craftsmanship side, each of them tends to muscle the ball, failing to marshal all of their body weight effectively. And inefficient stroking leads to the injuries that have forced both Serena and Venus to play fewer tournaments than have most of their peers. Where once their light competitive schedule appeared to keep them fresh, of late they've been woefully stale.

This rapid ascent and decline illustrates the peculiarities of tennis. In team play, peers demand excellence and commitment lest you let down the collective desires. A tennis player is deregulated, more team owner than member. Add to that the heavy layer of family involvement and the beguiling motivations that compel a father or mother to bring a child to a tennis court.

To Richard Williams, tennis's appeal was illustrated one spring day in 1978. Watching TV, he saw a female tennis player wave a large check in the air after winning the French Open. Right then he decided he would try to sire a daughter who would earn millions. And, amazingly, his prophecy came true. His daughters came, they saw, they conquered.

At her post-match press conference Saturday night, a teary Serena admitted she was upset by her loss. But her father Richard was sanguine. "I never have liked tennis," he told me, as we talked in a small hallway between Wimbledon's press room and the players' lounge. "It was the money I wanted."

He got it, and while his daughters are richer for his desire, their pursuit of transitory fame over an enduring legacy is an unfortunate consequence of a sport where individualism reigns supreme.

Joel Drucker is a regular contributor to Tennis Magazine and Tennis Week. He is the author of "Jimmy Connors Saved My Life."