The Nobel Prize Sperm Bank never fulfilled its mission of breeding geniuses. But it did bring 200 children into the world -- and now they're asking questions about where, exactly, they came from. 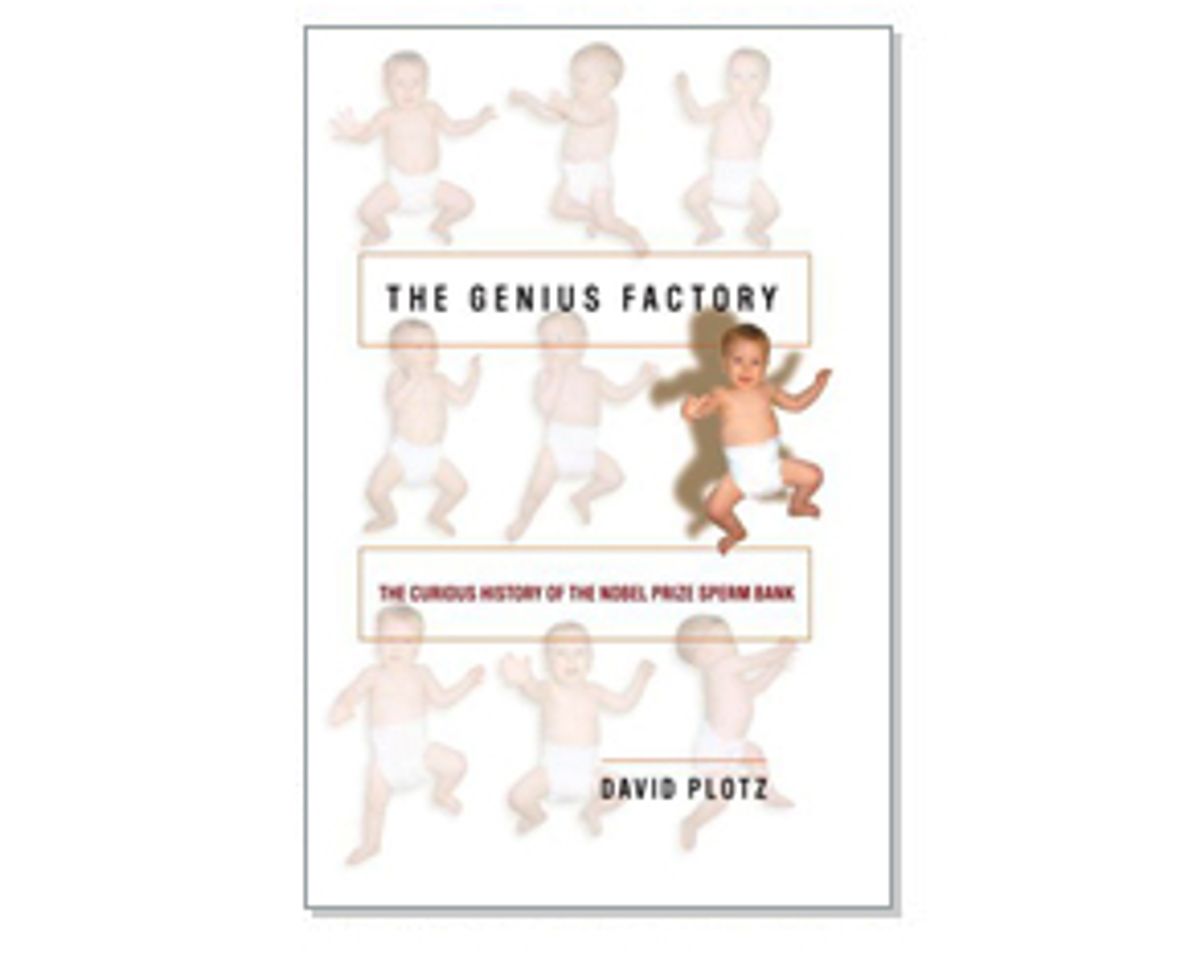 David Plotz's history of the notorious Nobel Prize Sperm Bank, "The Genius Factory," could have been a pure romp. The characters are too larger-than-life, the events depicted too ridiculous not to be nonfiction: William Shockley, co-inventor of the transistor, jacking off to save the world from mediocrity? It doesn't get better than that.

Or, Plotz could have confined himself to something more sobering. At the heart of the Nobel Prize Sperm Bank's appeal was founder Robert Graham's belief that if smart people didn't make more babies, the world would be overcome by the dumb and infirm. His proposal to solve this problem, by stocking his bank with sperm from carefully selected geniuses, was nutty eugenic racism, but the day isn't far off when parents will be able to specify exactly what genes they do or don't want. Working out the law and ethics to handle such a future will be a gnarly challenge, and that alone provides grist enough for a book.

But Plotz one-ups both approaches, and pulls off the tricky feat of taking readers on a trip both serious and silly. So we get hilarity, and Hitler. We get a brief history of eugenics, and we get Plotz himself entering a sperm bank's "masturborium" for some first-, uh, hand reporting on semen donation. (His contribution passes the bank's requirements, but he declines to become an actual donor.) In between the alarming and the absurd, we also get something more, something unexpected: an ongoing, fascinating and deeply felt meditation on fatherhood and family.

One of the oddities of story of the Nobel Prize Sperm Bank is that its founder, while crucial to the bank's genesis, isn't at the crux of the tale. Robert Graham, a millionaire who made his money by perfecting plastic lenses for eyeglasses, is an odd bird, a man who, Plotz writes, believed that the "genius factory was nothing less than the most important project of mankind, because it was the only possible salvation of a genetically doomed world." A self-made man, Graham believed that half-wits were proliferating, "that prosperity had ruined mankind, because it had reversed human evolution."

But the real story of the Nobel Prize Sperm Bank revolves around the newfangled "families" that it brought into being. The theory behind Graham's project may have been crackpot, but the result was undeniably real: babies, some 200 of them over the 20-odd years of the bank's existence. The story of these families isn't something that Plotz merely recounts: He becomes an integral part of it.

Plotz is an editor and writer at Slate magazine; "The Genius Factory" grew out of a series of articles he published there that chronicled both the history of the Nobel Prize Sperm Bank and his own attempts to track down children and donors associated with the bank. After an initial article, Plotz put out a call for donors and children via the Internet. At first the pickings were slim, and mostly anonymous, but Plotz kept plugging away, cultivating relationships via e-mail, occasionally upgrading to the telephone, and eventually, in a few cases, taking on face-to-face contact. He becomes, to his own surprise, a matchmaker of sorts, a go-between who helps to set up meetings between fathers and children. He is even present at those meetings; he becomes a confidant, and a surrogate father. To one donor, he is an "agent of destiny."

But being an agent of destiny isn't always easy. The real drama of "The Genius Factory" takes place near the end, when a young man named "Tom" meets, for the first time, his biological father, "Jeremy." (Nearly all the donors and children in "The Genius Factory" are referred to by pseudonyms.)

Tom's life hasn't been a smooth ride. A middling student, he grew up feeling unconnected with his putative father, "Alvin." When his mother tells him, in 2001 when he's 15, that his actual father was a donor to the Nobel Prize Sperm Bank and was most likely a famous scientist (perhaps even Jonas Salk!), he feels all topsy-turvy. On the one hand, it makes sense; he never felt connected to his father. On the other, it's confusing; he doesn't feel much like a genius.

That's only the beginning of Tom's confusion, though, because it turns out that Jeremy is no Nobel Prize winner, no genius of any type at all. He's a fast-talking scammer, a one-time medical student who weaseled himself into Graham's bank by sweet-talking his way through the vetting process and lying about his IQ. Today, he lives in a hovel in South Florida, surrounded by filth and cockroaches. In addition to his sperm bank spawn, he has sired a large number of children by a variety of women, few of whom he appears to support financially. Instead of a dream come true, he's a worst-case scenario for a fatherly role model.

By now, Tom, still a teenager, is a father himself, and is working long hours trying to keep his own fragile family together. For everyone present, including Plotz, the meeting is full of poignant imponderables and ambiguities. Tom is glad to have met his "real" father, but he doesn't feel a bond with him. Plotz wonders whether he should have helped set up the meeting at all.

The scene is both sad and funny, but above all, it is blindingly real. In a single stroke, it captures the ludicrousness of Robert Graham's attempt to save the world. The Nobel Prize Sperm Bank never could have worked -- even if all its donors were certified geniuses. The kind of natural selection necessary to routinely breed anything works on a time scale just a bit longer than what Graham had in mind. Geneticists agree: You can't count on geniuses breeding geniuses, particularly over just one generation.

The Nobel Prize Sperm Bank may, in the final analysis, have been a failure; the vast majority of its donors never got within spitting distance of a Nobel, and the bank's likely impact on the quality of the human race will be nil. But it did work -- in a sense. It produced babies who had one very important thing in common: mothers who wanted a better life for their children. As Plotz discovered, perhaps the one factor that categorized all the children of the Nobel Prize Sperm Bank was that their mothers were determined -- the kind of moms who, if their husbands were infertile or otherwise unable to do what was necessary, would look for the best breeding stock possible.

For example, "Samantha," the mother of another of "Jeremy's" sons, is an engineer at a high-tech company in Massachusetts. Her husband had had a vasectomy, and, writes Plotz, "her inner nerd loved the idea of a genius sperm bank. She was smart, she'd always been smart, and she wanted a smart kid."

So she raises one. Is it any surprise that on a day-to-day basis she is highly involved in her child's education and well-being? The paradox is ironic. The kind of mothers who would choose a donor from a Nobel Prize Sperm Bank, and thus place a bet on heredity, are precisely the kind of mothers who will also labor to make sure that the environment their children grow up in is as supportive as possible. So who's to say which is more important, nature or nurture?

It's a strange thing to do, to walk into a sperm bank and donate your semen, or to go there to get some sperm to make a baby. But an underlying theme of "The Genius Factory" is that our lives are only going to get stranger. The rate at which we are learning what role our genes play in our lives is accelerating at astonishing speed. It is not science fiction to predict that our children will have mind-boggling options for how their own children will be constructed. The eugenic issues raised by the sperm bank, as nutty as they were in the immediate context of Robert Graham and his half-baked racism, will be front and center when we can sit at a computer monitor and request genes for musical ability or mathematic brilliance.

But as bizarre as the science gets, and as amazing as the possibilities become, the result will still be babies, and families. Kids will grow up wondering how they came to be what they are, what their own life stories mean. The brilliance of "The Genius Factory" resides in its depiction of how these stories evolve over time. Marriages break apart, mothers tell their children the truth, sperm donors who originally never intended to be anything more than an anonymous donor find they want to see and meet their "children." Life gets complicated and messy, and every action taken has ramifications that could never be predicted.

It would be nice if we always had someone as thoughtful and clearheaded as Plotz to help us see our way through this increasingly dense tangle of biology and ethics and reproductive scientific miracles. Plotz has his own young children, and one can practically feel him subconsciously mulling over his future as a father as he investigates the unique new families created by sperm donation technology.

He'll be a good one, if the quality of the book that he's written is any indication. The role our genes play in our lives is a touchy subject, easy to abuse for racist or otherwise subversive purposes, and particularly sensitive in cases of children yearning to understand their own identities. Plotz negotiates every twist of their stories with grace and sensitivity, and places those stories on a firm bedrock of science and history. Throw in Plotz's sense of humor, and you have a great read.