"A nightmare for liberals"

The departure of Sandra Day O'Connor sets the stage for a nasty judicial confirmation battle -- and could tip the Supreme Court decisively to the right. 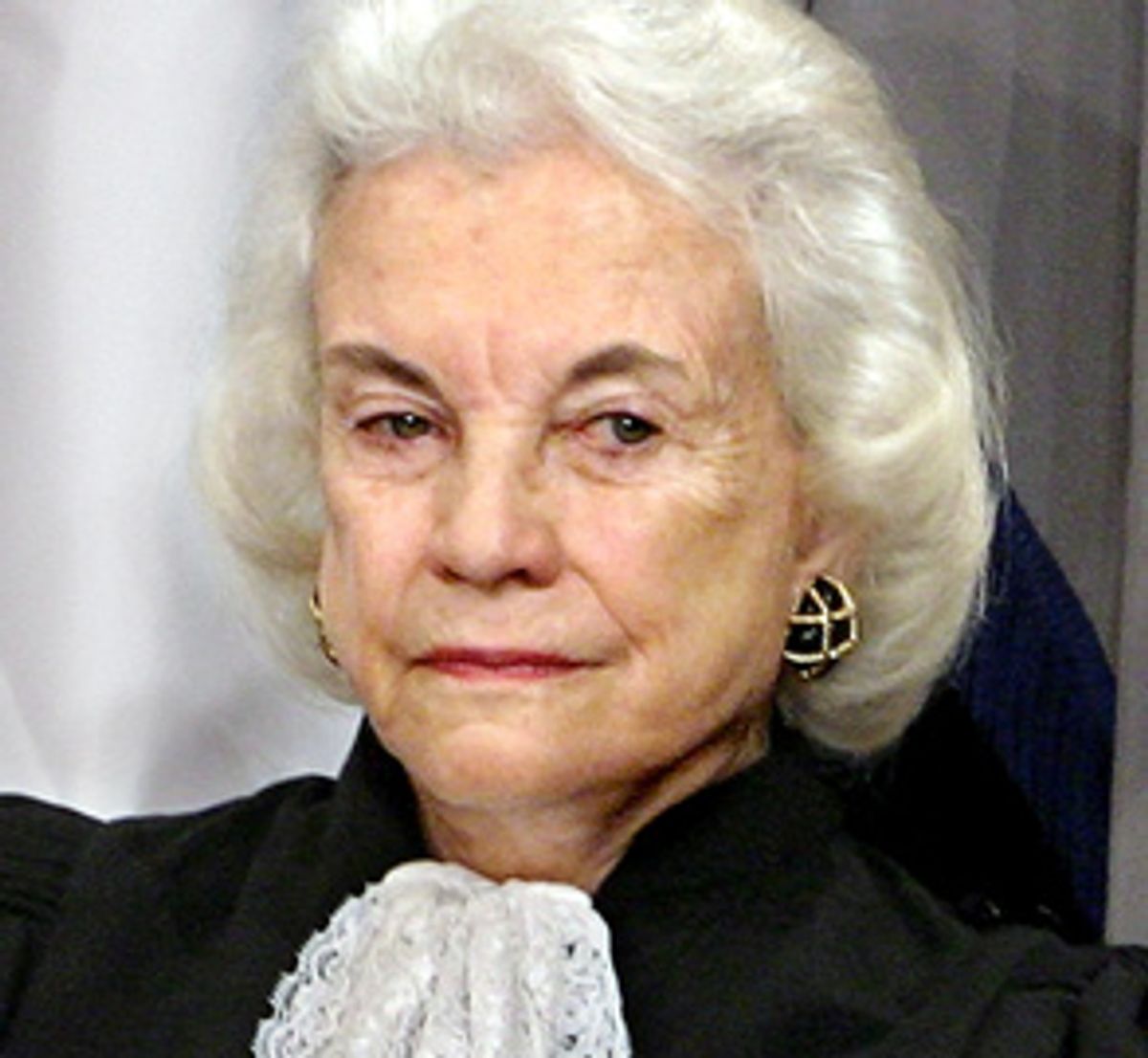 The announcement of Justice Sandra Day O'Connor's retirement Friday morning set the stage for what is likely to be the most bitter congressional confrontation until the midterm elections of 2006. O'Connor was the critical swing vote in many of the U.S. Supreme Court's most divisive rulings of the last two decades. President Bush's nomination of her replacement virtually ensures a partisan high-court confirmation battle this summer.

Most of the high-court tea-leaf reading in recent weeks has focused on the possible departure of the ailing 80-year-old Chief Justice William Rehnquist. While a momentous occasion for sure, a Rehnquist retirement would not have necessarily tipped the ideological balance of the Supreme Court. President Bush would have likely replaced Rehnquist, a conservative justice, with yet another conservative justice. The resignation of the more moderate O'Connor is a different story, especially since Rehnquist's future on the court remains up in the air and a second court departure remains possible.

"The retirement of O'Connor is a nightmare realized for liberal groups," said Jonathan Turley, a constitutional law professor at George Washington University Law School. "It is hard to overstate the impact of replacing O'Connor with a consistent conservative vote," Turley added. "We've had decades of 5-4 votes, and in a majority of those important cases it has been O'Connor who has supplied the fifth vote."

While considered a moderate conservative, O'Connor has often sided with liberal justices in some of the most heated decisions since Ronald Reagan nominated her 24 years ago to be the first female high-court justice.

O'Connor has been a swing vote in cases upholding the federal right to abortion; upholding affirmative action in higher education; allowing terror suspects to challenge their confinement in Guantánamo Bay, Cuba; and striking down Texas' anti-sodomy law.

Most analysts believe that Bush's choice to replace O'Connor would have ruled, and will rule, differently. Her replacement, unlikely to be announced until Bush returns from Europe July 8, will likely be in a position to affect decisions for decades to come. "It's just an enormously consequential departure," said Richard Fallon, professor of constitutional law at Harvard University. "One has to think that people on every side of every issue will think that the stakes here are very high."

Indeed, the battle has already begun. O'Connor's stepping down represents the first Supreme Court vacancy in 11 years, and liberal and conservative activist groups have been planning for the upcoming battle for a long time.

On Friday, MoveOn.org published an Internet ad arguing that the Republicans' heavy handling of the Terri Schiavo case shows that Bush's nominee will likely be out of touch with American mores. Even prior to Friday's news, the conservative organization Progress for America began running ads criticizing the approach liberals would take in the nomination battle.

After spending $45 million to reelect Bush, Progress for America boasts an $18 million war chest for the impending judicial nomination battle. Though the liberal People for the American Way recently spent $5 million to fight the unsuccessful efforts by the Republican leadership to do away with the judicial filibuster, the organization expects to be outspent by conservatives.

"We will never be able to match the radical right as far as deep pockets of money," said Ralph Neas, president of People for the American Way. "Considering who the president is and who is in the United States Senate," he said, his organization is resigned to the hope for a "bipartisan consensus candidate that is a moderate conservative."

Speaking on Friday, Bush said he hopes to have a replacement approved by the Senate before the Supreme Court term begins in October. To accomplish this, following what are expected to be fierce Judicial Committee hearings, Bush will have to pressure some Democrats to support a vote on his nominee.

Republicans have 55 seats in the Senate, which has the constitutional authority to give "advice and consent" on all White House nominations. But Democrats maintain the right to filibuster to block a vote on the nominee. It takes 60 votes to stop a filibuster.

Before reporters, Bush said in the Rose Garden that the confirmation hearings should be "characterized by fair treatment, a fair hearing and a fair vote."

Following O'Connor's announcement, Democrats went on the offensive. "If the president abuses his power and nominates someone who threatens to roll back the rights and freedoms of the American people, then the American people will insist that we oppose that nominee, and we intend to do so," Sen. Edward Kennedy, D-Mass., a member of the Senate Judiciary Committee, told reporters.

Saying, "I have voted for judges that have been pro-life," Kennedy promised not to apply a so-called abortion litmus test. But it remains unclear how Democrats will view any candidate that is outspokenly opposed to the federal right to abortion.

Conservatives were probably thinking on Friday of the scuttled nomination of Robert H. Bork, a former justice on the U.S. Court of Appeals for the District of Columbia Circuit. Republicans believe President Reagan's nominee in 1987 was voted down largely because he was a staunch conservative.

The perceived migration of Justices O'Connor and David Souter, as well as John Paul Stevens and Anthony Kennedy, toward moderation on the court has further mobilized the political right. Those justices were all nominated by Republican presidents. Social conservatives are now determined to appoint a firmly entrenched conservative.

"For the White House, the nomination of someone who is unknown or uncertain would be viewed as a clear betrayal to conservative groups that rallied to the president in the last election," Turley said. "Conservative groups expect nominees in the model of Justice [Clarence] Thomas and Justice [Antonin] Scalia." About one possible Bush nominee, Turley said, "Attorney General [Antonio] Gonzales is not that model. Gonzales would enter carrying water on both the left and the right. On the right he is viewed as unreliable, and on the left he is tainted by the torture scandal."

Though Gonzales is floated as a possible nominee, both because he is close to Bush and because the administration has long sought to make public overtures to Latinos, conservatives view Gonzales as exactly the unpredictable justice they hope to avoid. As a Texas Supreme Court justice, Gonzales upheld the landmark 1973 Roe vs. Wade ruling in a parental notification case.

Conservatives want their Bork in 2005 -- but confirmed this time. And liberals will be just as determined to achieve the opposite goal. Ironically, the more probable resignation of the conservative Rehnquist, ailing from thyroid cancer, would have likely led to a far less contentious nomination battle. Liberals would have liked to save their political capital.

"Rehnquist was a staunch conservative," Fallon said. "Having someone younger than Rehnquist would make a difference in the long run, but immediately in the short run it would not make too much difference at all."

For this reason, both Democrats and Republicans had hoped to postpone Senate confirmation hearings for O'Connor's replacement. Though expected to retire because of her husband's failing health, O'Connor herself is a relatively healthy 75.

"This is far more controversial, even though the same nominee might have been put forward had Rehnquist resigned. That nomination would have simply been symbolic," Turley said.

"It's a just a bad mix for Washington," he continued. "One, the city doesn't have a lot to do during the summer. Two, you've got a symbolic nominee stepping down. Three, there's a lot of money and a lot of people that will be brought to bear. Clearing his throat, Turley added, "We have the makings of a long hot summer."