This Cannes prizewinner -- half love story, half ghost tale -- shimmers in the memory like a desert mirage. 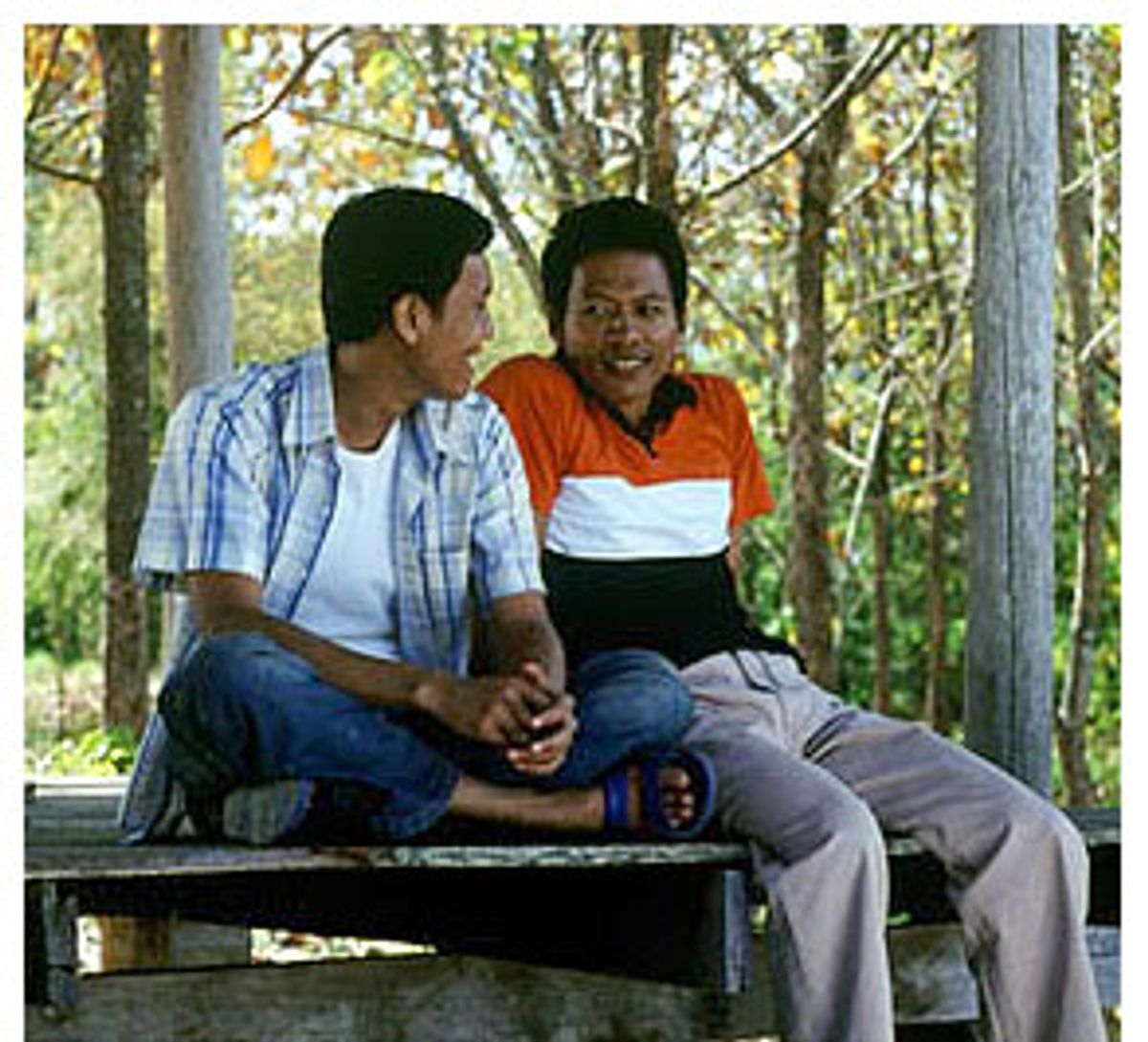 Apichatpong Weerasethakul's dreamily concrete "Tropical Malady" isn't just a movie about ghosts; it's a haunted picture, one that feels inhabited not just by actors and scenery but by spirits, too. Weerasethakul is a young Thai filmmaker who doesn't expect you to remember (or pronounce) his name: He goes, simply, by Joe. That will be convenient when you send your friends to see "Tropical Malady," which, if you're fortunate enough to have a chance to see this extraordinary picture yourself, you almost inevitably will. There's no other picture like it on the landscape.

"Tropical Malady" is Joe's third feature. (His previous picture, "Blissfully Yours," has played at festivals in the U.S. but never been released here; his latest, "The Adventure of Iron Pussy," a heartfelt adventure-musical about a transvestite action hero, does not yet have an American distributor.) It won the Jury Prize at Cannes last year, although it divided the audience there, prompting admiration and derision. Quentin Tarantino, who headed the jury (and who keeps proving, in surprising ways, how deeply he cares about movies), defended the movie vigorously at a press conference when he was asked why the jury had awarded a film that had a "mixed" reception.

As astonishing as the picture is, it's not hard to see why extremely literal thinkers may have been confused. "Tropical Malady" is made up of distinct halves, an asymmetrical apple that has been divided into two complementary and wholly necessary pieces. The plot is more like a piece of music than an actual story -- the best way into it is to surrender to its dramatic ebb and flow, enjoying its subtle crackle of warmth and energy without worrying too much about exactly what happened when, and to whom.

The first half is a love story about a young soldier, Keng (Banlop Lomnoi), assigned to patrol the Thai forests, and the country boy, Tong (Sakda Kaewbuadee), he's fallen for: Their story unfolds delicately, in a way that makes complete emotional sense because of the movie's lush, multitextured visuals and its deeply felt sense of place. Keng and Tong spend time both in the country and in town. Their relationship takes form slowly, first as a kind of clowning around, although Keng is certain of his feelings for Tong from the start. (Tong playfully rebuffs him, but it's clear the attraction and affection are mutual.)

As their friendship blooms, they sit together on a wooden platform in the countryside, and Keng gives Tong a cassette tape. "How did you know I like the Clash?" Tong asks with undisguised delight. (He has a snaggletooth grin that almost seems electric, particularly in a movie that uses so much lovely, natural light.) Keng invites him to go into town with him; Tong admits his embarrassment about doing so, saying he fears he's not sophisticated enough to fit in. "You like cool music," Keng says, a way of reassuring Tong that he'll be fine. The boys do things together, things that wouldn't necessarily be romantic except for the way Joe shows them to us, simply and with deeply felt pleasure: Keng teaches Tong to drive; the two go to the movies together, where their flirting takes the form of horsing around. The first half of "Tropical Malady" has a kind of knockabout romanticism to it; Joe gives us softly verdant jungles and town streets shot in muted, yet vital, colors -- I don't think the point is that the glow of romance softens everything in view, but that real life is so much less vivid than our dreams are.

In the movie's second half, that love story has been swallowed, and given new life, by a potent folk tale, in which the spirit of a man has found its way into the body of a tiger. It's in that second half that all of the movie's ghosts rise to the surface and step out to meet us, although we realize that they've been there, quietly lurking, all along. The second half of "Tropical Malady" puts us deep in the forest. The colors are brighter than they were before, as if they've soaked up some extra sun. A soldier patrols the forest, looking for a villager who has disappeared; we also hear, in voice-over, the story of a shaman who has the power to turn himself into a tiger. Is the soldier Keng? Is the missing villager -- or, stranger yet, the tiger -- Tong? We don't know for sure, which is part of the picture's vaporous, fragrant sense of mystery.

The soldier, as he searches for the villager, becomes intrigued by the tiger. He sees deep, reddish claw marks on the trunk of a tree; he squats down to touch some tracks on the ground -- they're paw prints at first, but they shift, inexplicably, into human footprints.

The jungle around the soldier is both noisier and more quiet than we expect it to be: We're aware that it's living around him, and that it has somehow pinpointed him as a foreign, though not completely unwelcome, presence. Its vivid greenery gives way to nighttime black: There are moments we can barely see the soldier, save for slashes of faint light that define his brow and cheekbones.

As the soldier goes deeper into the forest, he becomes more a part of it. And we learn, too, that as he searches for the mysterious tiger, the tiger is also circling him, with great curiosity and obsessiveness. (A talking baboon imparts this information, in chirps and squalls, in a sequence that may sound comical, but is actually startling and poetic.) As the soldier searches for the tiger, he glimpses a boy -- Tong? -- painted with tiger stripes. He comes upon the body of a recently slaughtered cow; as he watches, the cow's milky, phosphorescent spirit rises from the carcass and ambles casually into the brush, as if it has simply freed itself from its old life and is fully ready for a new one.

There are images in "Tropical Malady" that are still shimmering in my memory like desert mirages -- they're things I can't really be sure I saw: an unblinking tiger who speaks in an eerie but oddly soothing gutteral croon; a tree that quivers and shakes, its leaves outlined in bright light against an inky sky. The second half of "Tropical Malady" has no easily defined meaning, but it's safe to say it's a story of homecoming, of a man finding his way into the place where he belongs. "Tropical Malady" is a haunted dreamscape of memory and longing, a meditation on the way folk tales -- or any story that touches us deeply -- can become part of us. It's not the kind of movie you simply leave behind in the theater. It will follow you home, leaving only a trail of soft, invisible paw prints.