A political bombshell for Blair

Now that terror has struck London, will the British blame their leader? 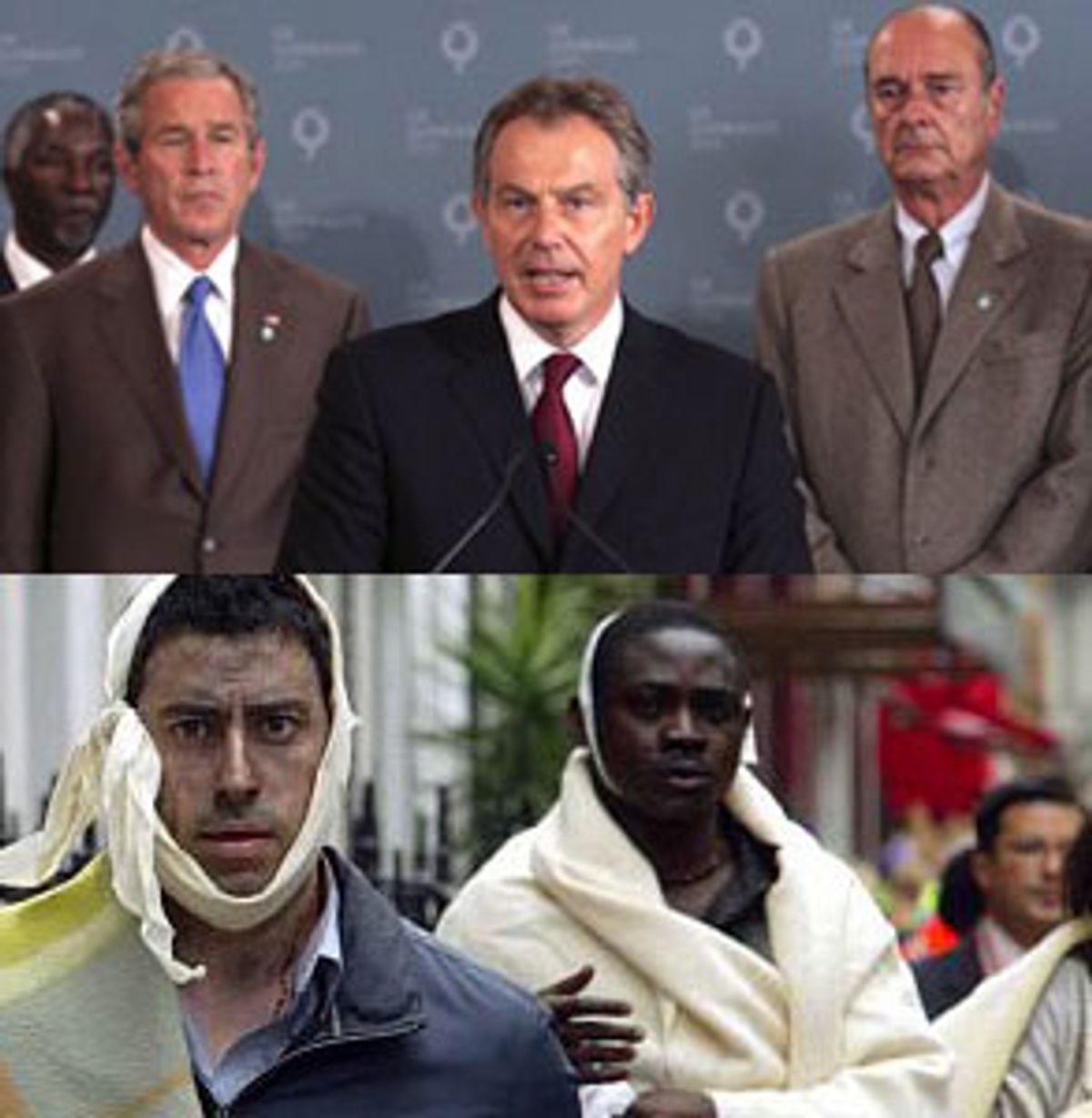 The bombs exploded while the morning newspapers here in Britain were frothing in jingoistic delight that London had won the bid to host the Olympic games, and with the agenda for the G8 summit apparently set by Tony Blair. Terrorism or war was off the news radar. But at the same time, the attacks weren't unexpected. Ever since 9/11, the police have been warning that it will happen here, not that it might. The government has been saying the same thing, in private as well as in public for years; and there was a full-scale rehearsal of a chemical attack on a tube station in September 2003.

These bombs were not, thank god, poisonous. But it is already clear from the reaction of the police and the transport authorities, from the first stories about the cause of the explosions -- a "power surge" was blamed, to prevent panic -- to the little touches like ferrying the wounded to hospitals in commandeered double-decker buses, that they had prepared and rehearsed in detail for an atrocity. We are unlikely to hear of all the measures taken. But it looks as if the police, the emergency services, and the transport authorities were all less shocked than Tony Blair, whose ghastly statement as he left the G8 summit in Gleneagles, Scotland, for London completely lacked his usual fluency. Where normally he skips lightly from cliché to cliché, there were terrible pauses between each one, which seemed to extend for hours.

So it would be natural to assume that the chief political victim of these bombs will be Mr. Blair. His own party believes that he personally dragged us into the American invasion of Iraq. No one doubts that these bombs are a sort of retaliation for that. The war was extraordinarily unpopular, and the only thing that has diminished its unpopularity since then has been the fact that whoever else was getting killed in Iraq, it wasn't often British soldiers. The fact that the bombs went off while President Bush was here will send a very clear message about whom in particular the bombers object to. Very few people here believe they hate us for our freedoms. We think they hate us because our armies are in their countries.

This means that no one who had been previously a doubter about the war is going to rally round the prime minister. It doesn't seem to the British particularly unnatural and horrifying that terrorists are trying to kill us, in the way that it seems to strike Americans. Those of us who believe that the Iraq war was a monstrous folly and a crime believed it before the election here in May, and what happened today will not make the war look wiser or more winnable.

On the other hand, the fact that the bombs have been so long expected means that few of the war's supporters will change their mind either. Since everyone had factored into their calculations and their arguments the likelihood of an atrocity in London, the most likely political effect will be to persuade both sides that they were right all along. At this very moment, the Daily Telegraph, which was the neocons' mouthpiece here when it was owned by Conrad Black, will be preparing an editorial to say that this atrocity proves how right we were to invade Iraq, and how wrong it would be to retreat.

Nonetheless, the discussions on the war and on the reasons for Islamic terrorism here are carried on in ways that seem unthinkable in the U.S. -- and the political consequences of the bomb can't be understood without some sense of the un-Americanness of British politics, and even of British conservatism.

As it happens, I was at a party thrown by a Telegraph editorial writer on Tuesday, in a flat where Winston Churchill once had lived, to launch a book on evangelical Christianity. This sounds like the sort of event that Bushite Republicans would understand as proper British conservatism; indeed, my friend is the only wholehearted believer in the war that I know, and we have had to agree not to mention it, lest our friendship rupture. I don't think he knows anybody outside the editorial writers' room at the Telegraph who would share his enthusiasm. And when you looked at the details of the party, it became apparent how unlike American right-wing Christianity the British sort is.

For a start, my friend is gay, as are the couple who had lent him Winston Churchill's old flat. The party had a memory of heterosexual exuberance in the shape of two great-grandsons of H.G. Wells, through his liaison with Rebecca West, but this was not the British establishment that either Wells or Churchill would have recognized. This is a city where even the ideological conservatives can pride themselves on their lack of military virtue, their tolerance, their exuberance, and on the diversity around them. Selling the war as a crusade won't do, even though it is Blair's instinct, since he wants everything he does to be part of a moral struggle.

The non-ideological conservatives have never been enthusiasts for the war. The Downing Street memos have made it obvious to everyone how much the institutional conservatism of the civil service was outraged by the Bush approach to Iraq. Such people might be dismissed as ineffectual liberals, but the most influential Conservative paper, the Daily Mail, a tabloid that sells 2 and a half million copies, could never be called either liberal or ineffective. It is violently anti-foreigner and devoted pages to abusing Jacques Chirac on the morning of the bomb, because he had insulted British food. But it also regards Americans as foreign, and has been notably skeptical about the war.

The Mail, and perhaps the Murdoch press as well, will probably conclude that this is all the fault of foreigners, asylum-seekers, and similar shifty types. In the dog-grooming parlor where my teenage daughter is working this summer, they all read Rupert Murdoch's Sun, and they all knew at once that the bombs were what happens "when you let the Ahmeds in." If it turns out that the bombers were native British Muslims, this sentiment will be heard more widely.

Such a rise in racial and religious tension must be one of the things that Tony Blair is most afraid of. But he, too, has little choice. He too must believe that the bomb shows he was right all along. His broad strategy has always been clear. First, and whatever happens, Britain's position in the world depends on its standing as an American client state, which must be maintained at all costs. As his chief of staff, Jonathan Powell, a very intelligent man, told a British ambassador setting off to Washington, "You must get up the arse of the White House and stay there."

Blair's not going to back off from that. The last thing that he can do at this point is to make noises about withdrawing troops from Iraq, or from Afghanistan, against Bush's wishes. But he must also press on with his domestic policy for managing the consequences of the war, which contains a couple of laws repulsive to principled liberals and instinctive conservatives. The first is the introduction of compulsory I.D. cards. These threaten to be extremely expensive, and have no obvious utility against terrorism. But the government must claim that today's atrocities prove the need for I.D. cards. The second is a law banning incitement to religious hatred. We already have, and have had for decades, a law banning acts and speech that tend to incite racial hatred. This covers the Jews, but not Muslims. Banning incitement to religious hatred looks like a straightforward piece of pandering to Muslim sensibilities, though in fact the law is so widely drawn that it also covers attacks on atheists and agnostics. Practically every comedian and liberal in the country has campaigned against the proposed law. But to draw back from it now would be impossible.

In the aftermath of the bombing, all the right and usual noises will be made about the terrorists not defeating us, and not destroying our way of life. This isn't just the right thing to say: It is very largely true. The committee charged with preparing for these attacks was called the "resilience committee," and London has proved very resilient today. I really don't believe that the terrorists will defeat us or that these bombs will destroy the British way of life. But one of the terrible things about war is that neither side has to win. The British are determined that we will not be defeated. We are very much less certain that the terrorists can be. How long will it be before the government warns us against the next attack?