As the New York Times reporter was led away, many in the courtroom feared that the real victim was a free press. 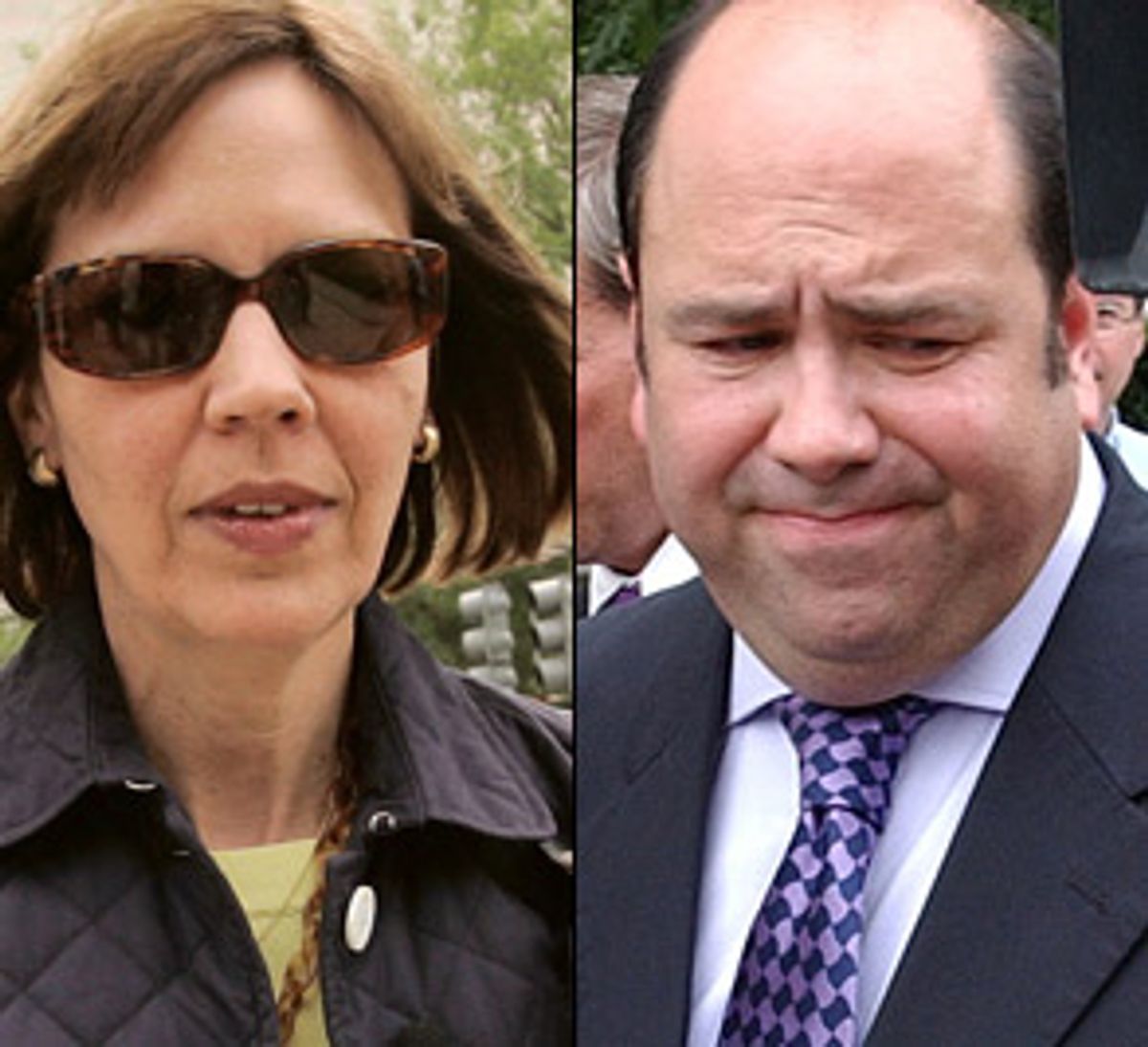 Minutes before Judge Thomas F. Hogan took the bench Wednesday, Judith Miller, the jail-bound New York Times reporter, handed her jewelry to her husband. "There it is," said another Times scribe, who noticed the exchange from the gallery. By all appearances, Miller was preparing for jail. Dozens of journalists watched from the courtroom, sullen and silent. Two of their own faced prison for upholding the most basic principle of the profession, for keeping their word. As one reporter said, it felt like the prelude to an execution. When Matt Cooper, Time Magazine's Washington correspondent, entered from a side door, ashen-faced and somber, he clutched the hand of his wife. She wore black sunglasses, as if to conceal that she had been crying.

About 90 minutes later, it was over. The dainty Miller was escorted off to jail by U.S. marshals twice her size. She will serve up to four months in a nearby prison for refusing to divulge the identity of a source who talked to her about Valerie Plame, a covert CIA agent outed by unknown administration officials in 2003 because her husband had criticized the White House. Cooper, on the other hand, received last-minute permission to divulge his source's identity to a grand jury investigating the matter, freeing him to go home to see his 6-year-old son. None of it made much sense, but then the investigation of the Plame leak never has. The columnist who revealed her secret identity, Robert Novak, appears to have never faced the threat of jail. Investigators have targeted two other reporters instead -- Miller, who never wrote about Plame, and Cooper, who only wrote about the craven motivations behind Novak's story. Many legal observers doubt that a crime has even been committed.

It was not just the journalists who were baffled. For the lawyers, the special counsel and even the judge, the court proceedings had all the trappings of a scene from Alice in Wonderland. "Your honor, I am not Alice," said Miller's attorney, Robert S. Bennett, when he rose to address the court. "But I somehow feel that I am. I am as perplexed as she was." Judge Hogan seemed to agree last week when he said the arguments in the case were becoming, as Alice would say, "curiouser and curiouser." Special Counsel Patrick J. Fitzgerald spoke of peering "through the looking glass" and down the "rabbit hole."

Only Cooper and Miller seemed to have a clear focus, even if they did make an odd couple exchanging glances across the defense table. Cooper is without question the most teddy bear-like member of the White House press corps, a family guy and a part-time standup comedian whose smile rivals that of John Edwards and whose imitation of Bill Clinton rivals that of Darrell Hammond. By contrast, Miller is coming off a run as journalism's femme fatale in a fierce brunette bob. Her role as Ahmed Chalabi's conduit for bogus WMD rumors helped seduce the nation into a false rationale for war. Now, just three years later, she has been remade as a sort of patron saint for the First Amendment. "My motive here is straightforward," she told the court, dressed casually in a quilted blue jacket. "A promise of confidentiality once made must be respected, or the journalist will lose all credibility and the public will, in the end, suffer."

Luckily for Cooper, he did not have to face that decision in the end, though few doubt that he would have gone to jail to protect his source. On Thursday, Norman Pearlstine, the editor in chief of Time Inc., released Cooper's notes to the special counsel, saying that the rule of law trumped Cooper's own wishes and his promise to a source. Then on Wednesday morning, moments before the court was to come to order, Cooper said his source contacted him. "A short time ago, in somewhat dramatic fashion, I received expressed personal consent from my source," he told the court. He remained silent on the source's identity, but agreed for the first time to answer Fitzgerald's questions. (According to grand jury regulations, the content of Cooper's testimony, including the identity of his source, will remain under seal until the grand jury completes its work. However, Cooper could conceivably write about his conversations with his source.) Though this is good news for Cooper, the implications for his profession are far less certain.

"I have not talked to a single reporter in the last five days who is not completely freaked out by this," said Lucy Dalglish, executive director of the Reporters Committee for Freedom of the Press. The reason has little to do with Miller or Cooper or the spy "administration officials" revealed to the public. Fitzgerald's investigation has targeted something far larger. He has attacked one of the core premises of a free press, the idea that journalists can assure sources who speak on condition of anonymity that they will not betray them. "Journalists are not entitled to promise complete confidentiality," Fitzgerald asserted in a court filing Tuesday. "No one in America is."

On Wednesday, Fitzgerald sounded defensive at times. Dressed in a pea green suit, he said, "Whatever people might want to think of me, this is not an individual effort. It is a team effort." But the legal reasoning his team has relied on has held up well on appeal. It depends on a 1972 Supreme Court decision in a case called Branzburg vs. Hayes, which an attorney for Miller compared to the notorious Dred Scott decision that justified slavery. Paul Branzburg, a 28-year-old reporter, had refused a grand jury subpoena to disclose his sources for a story about hippie culture called "The Hash They Make Isn't to Eat." The highest court in the land eventually split 5 to 4, ruling against Branzburg. The court rejected his claim that the First Amendment protects a journalist's sources.

But the split ruling did not settle the issue. In the years that followed, 31 states, and the District of Columbia, passed shield laws to protect journalists when they keep their vows of confidentiality. (Three proposals for a federal shield law are now winding their way through Congress, though they come too late to help Miller.) In the wake of the Pentagon Papers and Watergate, there was good reason for optimism. The courts largely steered clear of reporters' notebooks, and journalism schools trained their students to prepare for a type of martyrdom that would probably never come.

Now the times have changed again. Watergate is a distant memory, and the press has become everyone's punching bag -- a recent Annenberg poll found that as many Americans consider Rush Limbaugh a journalist as Bob Woodward. In recent years, reporters' confidential notes have been subpoenaed in a half-dozen cases, including lawsuits and investigations tied to Wen Ho Lee, anthrax "person of interest" Steven Hatfill, and even steroid use in baseball. Most journalists have risen to the challenge, facing down prison for their profession. But then Pearlstine decided that the rule of law was more important that the desires of his own reporter, or the traditions of the profession.

Before the courtroom opened, New York Times reporter Adam Liptak stood in the hallway, reminiscing on the days when all journalists knew they could never reveal a confidential source. "Until recently," he said, "that was everyone's understanding of the deal."

Pearlstine's decision, however, may have changed the equation. In his filings, Fitzgerald seemed to revel in the fact that not all journalists hold the same principles. "A number of journalists, first amendment scholars and opinion leaders flatly disagree with the position Miller is taking," he wrote in one filing, an idea that was later echoed by Judge Hogan. James Goodale, a former First Amendment attorney for the New York Times, says such disagreements can be fatal in court. "If the courts believe that there isn't substantial unanimity on this position then it doesn't give the same credibility to the argument."

Outside the courthouse, Bill Keller, the silver-haired editor of the New York Times, seemed to have a similar disdain for Pearlstine's decision. "I think it was wrong," he said. "I can't discern what effect it had on the judge." But he did add that the release of Cooper's notes might have encouraged Cooper's source to come forward, effectively giving Cooper a "get out of jail free card." Someone asked Keller whether he thought it was more justified for Miller to go to jail, considering that her source was not a whistle-blower, but someone who sought to reveal the identity of a CIA operative for political gain. The editor answered on principle. "To paraphrase Donald Rumsfeld," he said, "you go to court with the case you've got."