All eyes on Turd Blossom

Beltway insiders are consumed by one question: Did Karl Rove do it? 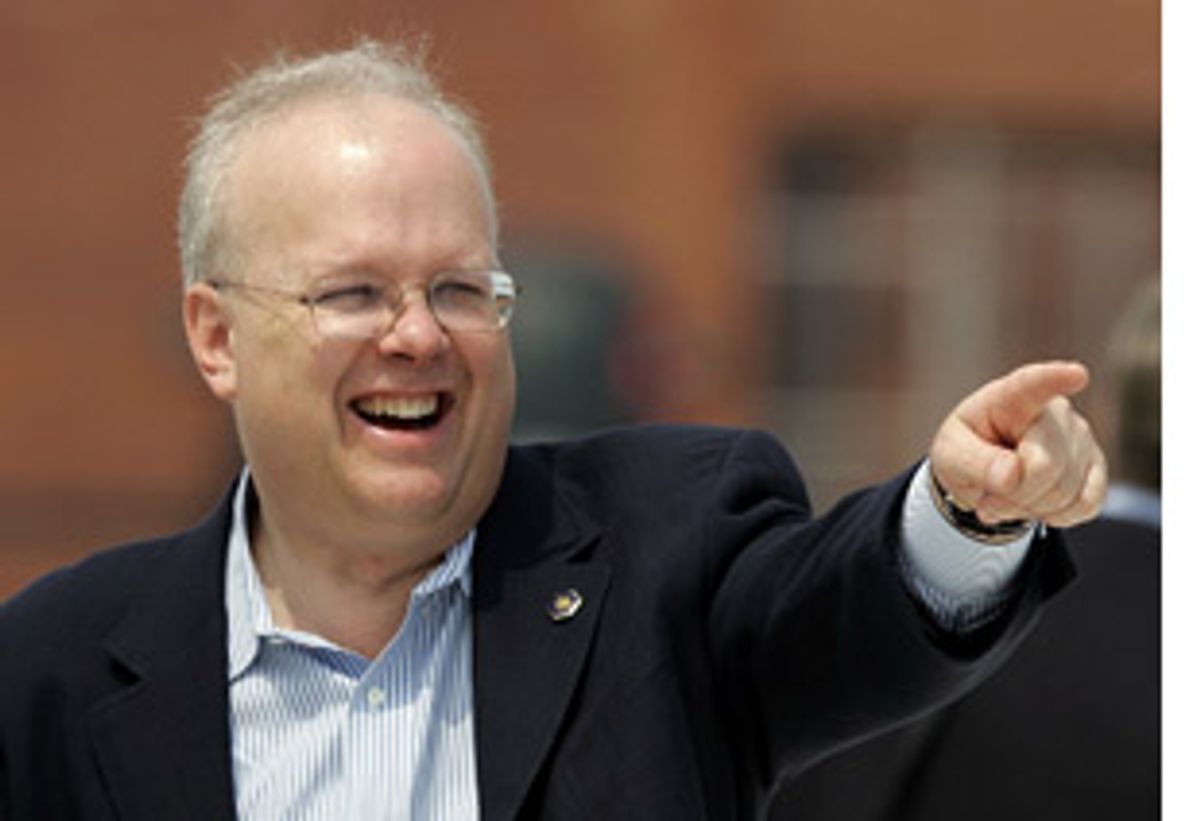 When Karl Rove was little known outside Texas political circles, he was fired from George H.W. Bush's 1992 reelection campaign for leaking information to syndicated columnist Robert Novak. According to newspaper reports at the time, Rove was terminated for passing information to Novak from a meeting of the president's chief advisors. Rove denied he was the leaker.

Today, with another Bush in office, a journalist is being jailed to protect a source that led Novak to name a CIA operative, Valerie Plame. There is fevered speculation that Novak's source was, once again, Karl Rove.

If Rove, George W. Bush's deputy chief of staff, knowingly revealed Plame's name, he could be charged with committing a felony. The same source that revealed the operative's name to Novak reportedly also spoke to two other journalists, Time magazine's Matthew Cooper and Judith Miller of the New York Times. Rove's attorney, Robert Luskin, confirmed to reporters on Saturday that Rove spoke with Cooper days prior to the publication of Novak's column in July 2003. But Luskin denied that Rove named Plame.

Miller was jailed on Wednesday for refusing to reveal her source, the latest step in a drawn-out investigation by federal special prosecutor Patrick Fitzgerald that has culminated in the most heated showdown between the media and the federal government since the Vietnam War. Time handed over Cooper's notes last Friday, and Cooper agreed on Wednesday to testify before the grand jury in order to avoid jail. Cooper says his source gave him permission "in somewhat dramatic fashion" to reveal his identity.

Rove isn't the only name being thrown around as the possible leaker. Speculation has long centered on Dick Cheney's chief of staff, I. Lewis "Scooter" Libby. But at least one critic, Valerie Plame's husband, says either way, Rove bears some responsibility for what happened -- for fanning the story's flames. "I have no idea whether [Rove] was the source or not," former Ambassador Joseph Wilson told Salon on Wednesday. "But certainly he was part of the effort to push this story, including his phone call to ['Hardball' host] Chris Matthews." Wilson claims that Matthews told him that Rove had called days after the Novak column ran and said that Wilson's wife, Plame, was "fair game." Matthews has testified in the Plame case, though publicly he has neither confirmed nor denied Wilson's statement.

"In my judgment, [Rove's] behavior, even if it is not criminal, it is certainly below the standards of ethics we have a right to expect from our senior White House leadership," Wilson said. "It's an outrageous abuse of power."

Meanwhile, Rep. John Conyers Jr., D-Mich., is reportedly circulating a draft letter to his colleagues calling on Bush to demand that Rove either come clean about his role in Plame's outing or resign. "Notwithstanding whether Mr. Rove intentionally violated the law in leaking information concerning former CIA operative Valerie Plame, we believe it is not tenable to maintain Mr. Rove as one of your most important advisors unless he is willing to explain his central role in using the power and authority of your administration to disseminate information regarding Ms. Plame and to undermine her husband, Ambassador Joseph Wilson," Conyers wrote.

"Democrats are getting a little too giddy in trying to get [Rove]," said Chuck Todd, who edits the National Journal Hotline, an subscriber-based service considered the go-to point in daily political news. "It's a grand jury investigation. I think Democrats better keep their powder dry on this."

Conservatives allegedly targeted Plame as payback for an Op-Ed column Wilson wrote for the New York Times in 2003, which contradicted claims made in Bush's State of the Union address earlier that year. In that pre-Iraq war address, Bush said that Saddam Hussein had sought uranium from Niger. Bush administration officials spent months denying that the claim was erroneous. In his July 2003 Times column, Wilson revealed that he had been sent by Vice President Dick Cheney to West Africa in 2002 to investigate the Niger intelligence and had reported that it was "bogus." The Bush administration eventually retracted the Niger uranium claim.

In the months after Novak named Plame, the Beltway scuttlebutt was that Rove was the leaker. That speculation flared up again last weekend, when a loose-lipped MSNBC political analyst, Lawrence O'Donnell, said on Friday's taping of "The McLaughlin Group" that Cooper's source was Rove.

"I know I'm going to get pulled into the grand jury for saying this," O'Donnell said, seemingly unfazed by the federal prosecutor's unusual intent to force journalists to reveal their sources. "But the source for Matt Cooper was Karl Rove, and that will be revealed in this document dump that Time magazine is going to do with the grand jury."

It may be wishful thinking on the part of Beltway journalists itching for a good story -- and even more so for liberals itching for revenge -- that the impresario of George W. Bush's presidency could be led away in chains. But we have yet to find out if O'Donnell was right. Grand jury investigations are supposed to be confidential.

Yet when O'Donnell named Rove on "The McLaughlin Group," the lines between rumor and reporting started to blur. O'Donnell continues to serve as a political analyst for MSNBC, though he spends much of his time today as a producer of the NBC drama "The West Wing." "I timed the announcement to coincide with Time's delivery of Matt Cooper's e-mails to the special prosecutor," O'Donnell told Salon. Speaking by phone, shortly past midnight Thursday morning after arriving from Los Angeles into Washington, D.C., O'Donnell was keen to defend himself.

"Had I reported it months ago when I discovered it, I would have been throwing sand in the gears of the case as it progressed all the way to the Supreme Court. And it probably would have created the ridiculous sideshow of me being dragged in front of the grand jury and asked to reveal how I knew that Karl Rove is the source who Matt Cooper was protecting."

But the pundit's move has triggered questions and criticism. "If [O'Donnell] really had his facts straight, why didn't he report it on MSNBC? And if he didn't, why is he saying it on the 'McLaughlin Group'?" asked Janice Castro, who directs the Medill School of Journalism's graduate program. Hotline editor Todd calls O'Donnell's move "just Lawrence grandstanding, wanting to exaggerate his access because he doesn't have the same access that he used to. Maybe he had special knowledge, but it had the feel of grandstanding and he is certainly someone who had the reputation of grandstanding."

"Of course it was grandstanding, absolutely!" O'Donnell countered proudly. "I was grandstanding. I had something to grandstand about. I have the fact that every reporter in Washington wanted to have and could not get.

"Every minute of the 'The McLaughlin Group' is grandstanding for every one of us," the onetime Beltway journalist continued. "Television is for grandstanding. That's what men in Washington get in makeup to do, grandstand."

O'Donnell is standing by his statement, which set off a flurry of "Is it Rove?" stories and blog posts over the weekend. On Arianna Huffington's Huffington Post, O'Donnell has continued to blog about "breaking" the story that Rove was Cooper's source, and likely Novak's as well. After naming Rove on the PBS program "Friday," O'Donnell proceeded to say, "When [Bush] finds out it's Karl Rove, the question becomes, What does the president do then?"

"It was a deliberate act that I was planning for months," O'Donnell told Salon. "What I've been doing with the HuffingtonPost is simply staying abreast of the story while it was evolving, and it turns out that a blog is an absolutely perfect way to do that," he said. When asked about his sourcing, O'Donnell replied: "I will not characterize my sourcing in anyway." Then he added, "After my public revelation of it, I obtained yet another highly authoritative source on this matter, on the same thing. That Rove is the person Matt Cooper is protecting -- had been protecting up until today."

But central to the investigation is whether Cooper's source was Novak's source. That remains unclear. O'Donnell acknowledged this point. "I don't know anything about Novak's source," he insisted. "They talk to similar people. They're on the same beat. Judy Miller isn't on the same beat those guys are on. They are on a White House political beat. And they cover campaigns, Novak and Matt Cooper. And campaigns are the place where you get to be close to guys like Karl Rove."

Should Fitzgerald ultimately conclude that Rove was Novak's source, and that he knowingly exposed Plame, the aftershocks could hardly be overstated. It is considered a near axiom among political analysts that Bush owes his presidency to Rove. Following Bush's second-term victory, a gleeful president said Rove was the architect of his triumphant presidential campaign.

Rove's attorney says that the government has assured him that his client, while a party to the investigation, is not the "target." Rove's attorney, Luskin, did not return repeated calls from Salon. Whoever Cooper's source was, the Time magazine journalist told U.S. District Judge Thomas Hogan on Wednesday that he had been ready to accept the sanctions for not testifying, but that his source told him today that he was released from his ethical obligation protect him or her.

A reporter persisted: "But just to be clear, whether Rove condoned it or not, he also did not participate in that type of activity, as far as you're aware. Is that correct? Did you ask about that?"

McClellan responded: "Look, there is an investigation going on to pull together all that information. I've answered this question, and we can ask it a million different ways, but my response is still going to be the same."

Ever since, the White House response has remained the same. One year after McClellan insisted that Rove was not the leak, Rove testified before the grand jury. President Bush and Vice President Cheney have also given testimony, along with Novak and a myriad of other journalistic and political insiders.

Novak says, like Cooper on Wednesday, that his source also released him from their confidentiality agreement. But Novak has refused to speak publicly about the investigation, beyond denying that he is to blame if reporters are jailed. With the jailing of Miller on Wednesday, the intertwined circle of journalists and politicians in Washington will certainly discuss whether Miller is paying for Novak's decision to identify Plame.