The final tilt of the scales

With Sandra Day O'Connor's retirement, right-wing Republicans see the opportunity of a lifetime to seize the Supreme Court once and for all. 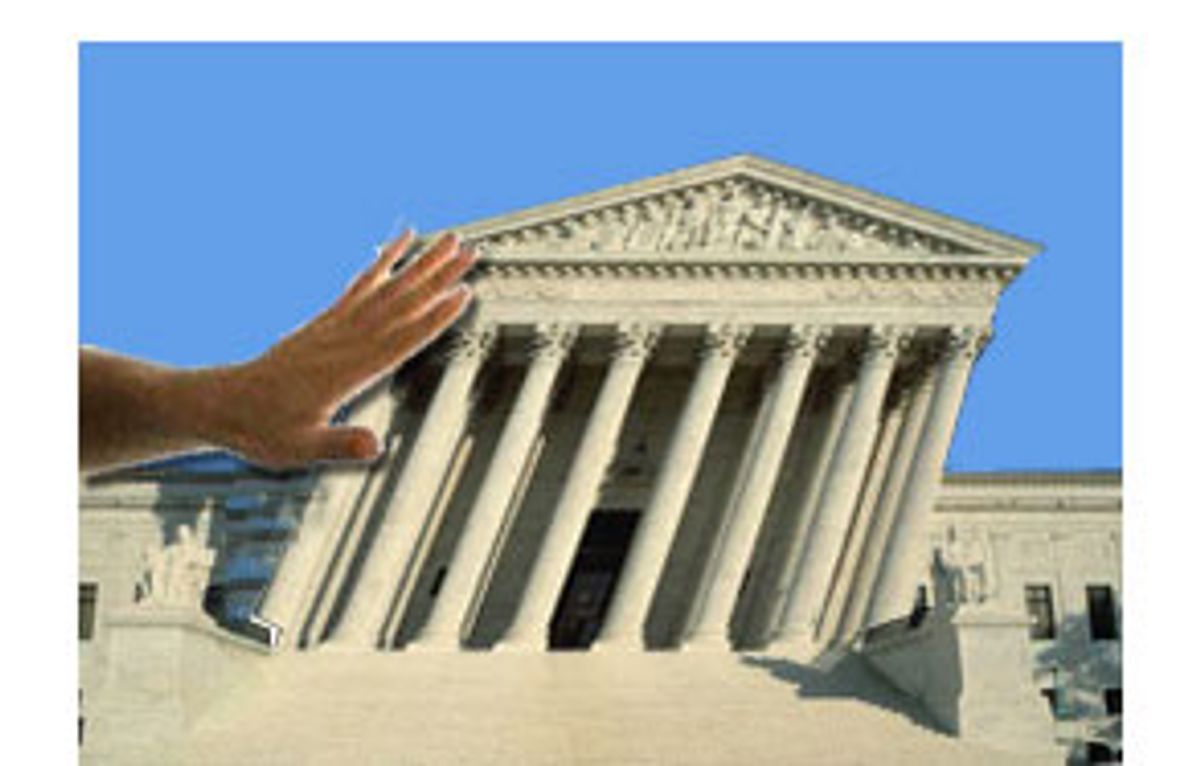 Ever since Franklin D. Roosevelt breached the conservative fortress of the U.S. Supreme Court, Republicans have dreamed of restoration. Every Republican president attempted to fill the court with judges who would stall, overcome and even reverse changes in the law and in American society. President Eisenhower felt that appointing Earl Warren as chief justice was the "biggest damn-fool mistake I ever made." Warren became the leader of liberal jurisprudence, using the law to advance social equality and rights. "Impeach Warren!" became the cry of the right.

President Nixon attempted to pack the court with two Southern segregationists who were rejected by the Senate. His choice for chief justice, Warren Burger, conservative as Burger was, disappointed him, and he took to calling the justice "a dumb Swede." At last, he selected William Rehnquist, the farthest right candidate he could find, a judge who had personally intimidated blacks and Hispanics at polling places and had written a memo in favor of segregation, according to John Dean, Nixon's White House counsel, in his book "The Rehnquist Choice." Before the confirmation hearing, Nixon instructed Rehnquist to "be as mean and rough as they said you were."

Rehnquist's consistent conservatism made him President Reagan's natural choice for chief justice. Reagan, too, hoped to pack the court with justices who would play well with Rehnquist. He appointed Antonin Scalia, even father to the right than Rehnquist, and Robert Bork, perhaps even to Scalia's right, a dyspeptic reactionary rejected by the Democratic Senate. And Reagan named Sandra Day O'Connor, gaining credit for appointing the first woman, who also happened to be a conservative former state senator from Arizona and such a close friend of fellow Arizonan Rehnquist that they had once dated.

President George H.W. Bush believed he was filling the court with traditional conservatives, but played two wild cards. David Souter has aligned himself with the moderates and liberals. Clarence Thomas has been consumed with a bottomless ideological fervor fed by rage and resentment; he appears not to have recovered from his confirmation hearing, at which he was accused of sexual harassment and which he decried as a "high-tech lynching." Initially, Thomas walked in the shadow of Scalia, but he has emerged on an even farther shore of the right.

With only two out of nine justices having been appointed by a Democratic president, the Republican right still considered the court a bastion of betrayal and temple of the left. O'Connor often turned out to be the swing vote in decisions going 5-4 against the conservatives. She is a classic literal conservative who believes that tradition and precedent have their own claims. She is small-bore, resting on evidence and case law, while Rehnquist, Scalia and Thomas veer erratically in hot ideological pursuit of the "original understanding" of the Constitution as they divine it, in a mystical séance summoning shades of the founding fathers who bear little resemblance to their historical selves. With O'Connor, Roe vs. Wade's legalizing of abortion has been preserved; affirmative action and campaign finance reform have been upheld.

Conservative frustration at the inability to remake the country through Republican domination of the Supreme Court has risen exponentially during O'Connor's ascendance. The Federalist Society, a tightly knit group of conservative lawyers created during the Reagan period, now operates as a controlling network throughout the Bush administration. There is simply not a single presidential appointee in a position of legal responsibility -- from the White House legal counsel's office to the Justice Department, and in the counsels' offices in the departments and agencies -- who is not a card-carrying member. Among them, the regnant doctrine is called the "Constitution in exile" -- a belief that the true Constitution has been suppressed since Roosevelt and can be restored by the uniform appointment of "originalists" to the court.

With O'Connor's retirement, the Republican counterrevolution sees the opportunity of a lifetime to shift the court once and for all. While the fate of abortion has aroused the most controversy, national security will undoubtedly occupy the court in making new law even more. A host of questions are unresolved: What power does the president have to keep information secret? What is the extent of executive privilege as applied to war powers? Should free speech be infringed when national security is supposedly at risk? What is the president's power to detain? Can due process be suspended? What is the president's power to torture?

Indeed, the notion of torture is alive in the executive branch. Bush's lawyers, in the Office of Legal Counsel of the Justice Department, have concluded that the president "enjoys complete discretion" and that any limitation on his power to coerce "enemy combatants" is unconstitutional. Justice Thomas' logic is the same as the logic of the OLC in granting the right of the president to order torture as part of his inherent authority as commander in chief. In his dissent in Hamdi vs. Rumsfeld, Thomas argued that detainees have no right to due process of law, and he assigned "unique" powers to the executive in national security and none to the Congress, contrary to the Constitution. The extremity of advocating legalisms for the suspension of rights and torture is not unrelated to a broader extremism.

The spirit animating the Bush administration and the conservatives on the court is the illusion of omnipotence. It is the opposite of that of Justice John Paul Stevens (a Republican named by President Ford, who has recently expressed his pride in that appointment). In his dissent last year in Rumsfeld vs. Padilla, Stevens argued that an American citizen could not be detained without due process. "Even more important than the method of selecting the people's rulers and their successors," he wrote, "is the character of the constraints imposed on the Executive by the rule of law."