Owen Wilson and Vince Vaughn whoop it up in this Hollywood comedy that's actually -- wowee! -- original and funny. 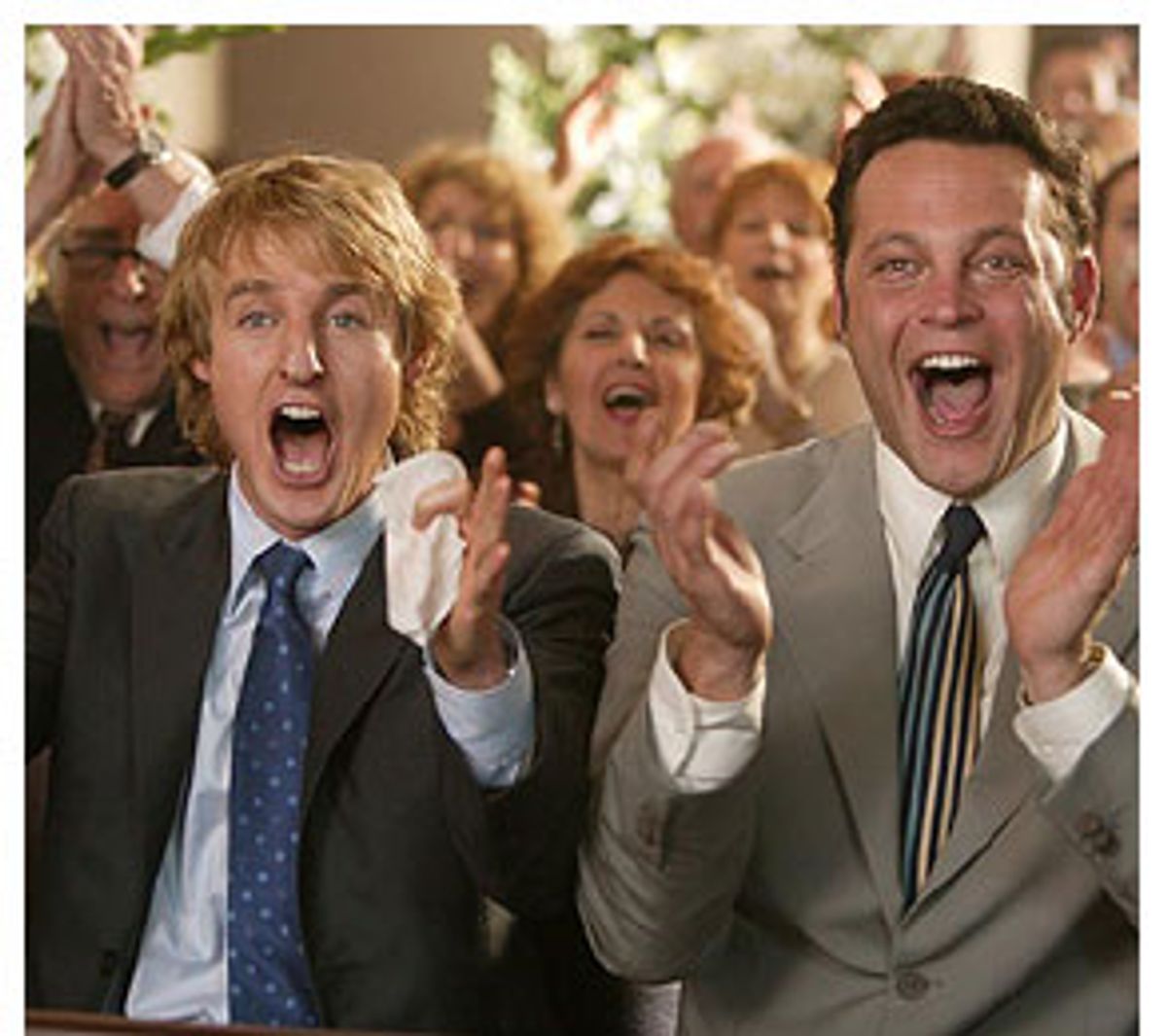 So many comedies today feel as if they've been made by tribunal, groups of elders who know what's best for us and who pretend to think they know what we'll find funny. But "Wedding Crashers" -- in which Owen Wilson and Vince Vaughn play not-quite-grown-ups who dive-bomb their way into weddings to which they haven't been invited, chiefly to pick up women -- is that rare contemporary mainstream comedy that seems to have been made without parental supervision. The jokes sizzle and fly, with reckless disregard for propriety or for what the audience will "get." That's not to say the director, David Dobkin, or the writers, Steve Faber and Bob Fisher, are conspicuously trying to go over people's heads. But let's put it this way: I don't know about you, but I can't remember the last time I saw a touch-football sequence scored to the Dave Brubeck Quartet's "Blue Rondo A La Turk," a bit of music that used to be a staple in the homes of middlebrow American intellectuals, back when there actually used to be middlebrow American intellectuals.

The sequence might have just as easily used some pleasing blur of classic pop, just because that's what's usually done, and why mess with formula? But someone, somewhere, took the scenic, crooked road instead of the ho-hum thruway. "Wedding Crashers" isn't a perfect comedy: There's a great deal of trimmable flab in its last third or so, and the picture's redemptive ending smells vaguely of pressed luncheon meat. But for the most part, the movie has a loose-jointed, crazy-ass gracefulness. And even though it's conventional in the broad sense, it still vibrates with a sense of risk-taking.

Vaughn and Wilson play longtime best friends -- their names are Jeremy and John, respectively -- who are also partners in a Washington divorce-mediation firm. They're happily single, 30-ish guys who, during "wedding season," make lists of the nuptials they're going to crash, determining ahead of time what roles and pseudonyms they're going to adopt and following an elaborate system of rules. (They keep a couple of Purple Heart medals handy in case they're faced with a cash bar; who'd hesitate to stand a wounded vet a drink?) Their chief goal is to meet and sleep with as many women as possible. Dobkin gets the point across with an exhilarating montage showing Jeremy and John crashing multiple weddings of various ethnicities, but all of which, at one point or another, feature that perennial choice of wedding DJs, the Isley Brothers' "Shout!" And the sequence is cut in a rapid-fire spiral so we see John and Jeremy swinging their dates blissfully around the dance floor one second, and bouncing, with disreputable relish, into bed with them the next.

But John and Jeremy's meticulous routine is shaken when John is suddenly struck by the notion that what they're doing isn't quite right: "Do you think we're being a little -- sleazy? Well, maybe that's not the right word," he suggests tentatively to Jeremy, in a post-wedding-season bout of soul-searching. His doubts are intensified when, at Jeremy's urging, the two crash "the Kentucky Derby of weddings," hosted by the U.S. Treasury secretary (played, with muted mischievousness, by Christopher Walken), and John falls in love with one of the bridesmaids (played by the flirtatiously game Rachel McAdams).

The plot mechanics of "Wedding Crashers" aren't particularly important. What is significant is the way Dobkin and the screenwriters treat their characters. Only squares would want to see John and Jeremy undergo any sort of phony transformation (and, admittedly, the ending of "Wedding Crashers" flirts dangerously close to that). But while the movie revels in John and Jeremy's outlandish behavior, it also recognizes that they're rapidly nearing the age when it will no longer be considered cute.

More than once John mentions the fact that he and Jeremy are just enjoying themselves while they're young -- and there's always somebody nearby to remind them that they're not that young. The movie doesn't want to punish its characters for having a good time; it simply realizes that good comedy often has a bittersweet edge. Neither Vaughn, with his cranky prizefighter's jaw, nor Wilson, with his endless-summer smile, looks old by any stretch of the imagination. But now that you mention it, maybe there are a few little sun wrinkles around John's eyes, or a trace of genuine weariness in Jeremy's nervous, poker-face twinkle. John and Jeremy are the butt of the movie's jokes as well as its heroes. As much as we'd like to see them get away with these kinds of shenanigans forever, the movie is funny precisely because we know they can't.

"Wedding Crashers" hooks you in its first 20 minutes. Dobkin (who previously directed the black comedy "Clay Pigeons," as well as the absurdly delightful "Shanghai Knights") doesn't make the mistake of trying to ease us into comedy mode; he pitches us into it head-first, which is a lot more fun. He makes the most of Vaughn and Wilson's web-slinging dialogue. Their dueling taunts -- "Oh, please don't take a turn to Negative Town!" is met with "Grow up, Peter Pan! Count Chocula!" -- take on a kind of contrapuntal schoolyard rhythm.

Even beyond that, though, Dobkin clues us in early on that John and Jeremy don't crash weddings just for the babes. We see them march into a Jewish wedding, jaunty in their yarmulkes, or cutting the rug with a bunch of rowdy Irishmen. They have much more fun at these alleged celebrations than most of the folks who have actually been invited, taking obvious pleasure in their instantaneous ability to fit in. They're wildly canny, too: Jeremy makes balloon animals for the kiddies, always making sure the most attractive single women are near enough to notice what a way he has with the little squirts. John dances with ancient dames and awkward 7-year-old flower girls alike. And both yuk it up with the old-timers as if they were secretly -- or, more likely, sincerely -- having a blast.

It doesn't hurt that both Vaughn and Wilson are extremely charismatic actors, albeit in completely opposite ways. Wilson, the drawling Don Juan, wears his easy charm like a broken-in suede jacket. He's seductively naughty, surreptitiously dripping Visine into his eyes so a comely cutie will think that a couple of total strangers' vows have moved him to tears. Vaughn is a trickier case, and he's also Wilson's perfect foil. While Wilson keeps everything loose, with Vaughn, the gags are locked up tight and parceled out in little paranoid bursts.

Vaughn isn't the kind of comic actor you immediately and comfortably give yourself over to: He gets laughs by keeping us a little tense -- there's something about him that makes us wonder if he's going to blow at any minute. He has complete control of his material here, and his performance has a nervy, percolating energy. He knows how to use his sheer stature as part of the joke: Clasping a petite conquest on the dance floor, he murmurs, "I feel so tiny in your arms," and his deadpan audacity is so big it practically explodes the confines of the screen.

I know lots of moviegoers who have turned against Hollywood "product," for reasons that are, sadly, perfectly justifiable. I also know other moviegoers (and, unfortunately, plenty of critics) who believe Hollywood movies should be graded on the curve: We shouldn't scrutinize them too carefully or be so ridiculous as to expect them to be remotely intelligent or capable of subtlety. But I think "Wedding Crashers" -- whatever its flaws may be -- should at least makes us define what we mean when we talk about Hollywood product.

The picture is highly commercial in the sense that it will play at the local multiplex, and lots of people are likely to flock to it in its first weekend, at least: It's the kind of picture you want to see with a bunch of people on a Friday night, to be part of a crowd of individuals who will all laugh at the same silly things. But unlike so many other recent (or upcoming) Hollywood products, it was made from an original screenplay (Faber and Fisher previously wrote for TV sitcoms); it didn't come from a source that audiences are already familiar with, like an old television show or a previous movie. "Wedding Crashers" may be the most optimistic Hollywood comedy of the year, because it restores at least some dim hope that directors, writers and actors with actual brains in their heads can somehow triumph over unimaginative studio execs. In that way, "Wedding Crashers" isn't just the life of the party, but its pulse.