Getting straight with God

The Rev. J. Grace Harley used to be a lesbian who posed as a man to marry a woman. Now she has overcome cocaine and "little hot-to-trot women" and is speaking out to save homosexual sinners. 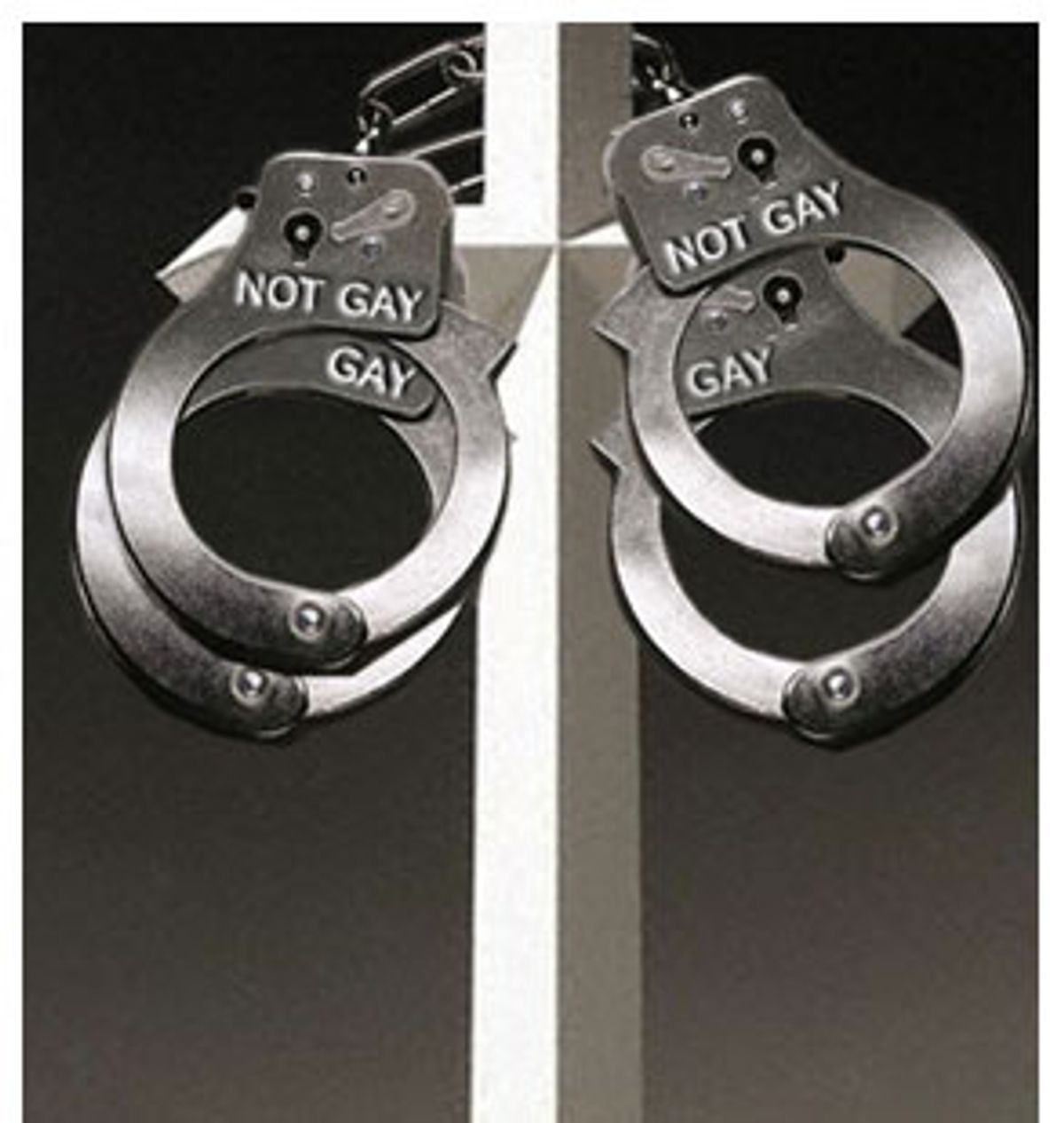 The Rev. J. Grace Harley is a kindly, big-boned, middle-aged black woman with gentle eyes and an obvious wig. She thanks God that she arrived safely at work. Harley is the founder of Jesus Is the Answer Ministry, one of more than 100 Christian ministries across the country that seek to turn homosexuals into heterosexuals. On her Web site, Harley describes herself as "the manifestation of Christ Jesus' truth on homosexuality (2 Corinthians 4:2) which describes same sex attraction disorder (S.S.A.D.D)." She hosts a local cable TV show, "God's Will and Grace," in Washington, and meetings for Homosexuals Anonymous and Overcomers Ministries, two programs that help gays and lesbians get straight with God.

On a recent Wednesday night, Harley is sitting behind a desk in a barren community center, located across the street from the Greater Mount Calvary Holy Church in Northeast Washington. She is not supposed to host the Overcomers Ministries meeting that night, but given that the regular leader is late for some reason, she will take charge. The only people in the audience are me and a young, soft-spoken African-American man, a student at a local university. He is toting a tattered Bible and a book bag. The regular leader never does show. We pray for him later.

Earlier this summer, I interviewed six gay men who had spent months or years in what is called "reparative" or "conversion" therapy, programs run mostly by Christian conservatives that allegedly help homosexuals become heterosexuals. Each of the men, trapped between their religious beliefs and sexual orientation, told me reparative therapy had only made them depressed. All of them recovered by coming out of the closet. Still, the religious right claims that efforts to change gays stem from "compassion, not bigotry," according to the Family Research Council. I decided to see for myself. I told Harley I was gay, although I am straight and married. I used a fake name.

Standing in front of the room like a schoolteacher, Harley assures us that it is possible to overcome the sins of homosexuality and offers herself as an example. She confesses that she is a former lesbian who dressed and lived as a man for 18 years. She registered as a man on a Maryland marriage application and wed another woman. At the time, the "J" in her name stood for Joe. When the marriage ended, it was "the worst day of my life," she says. But it ended because of her own infidelity, fueled by what she describes as a voracious appetite for sex with other women. And a voracious appetite for cocaine.

Harley once overdosed on cocaine while partying with a lesbian lover, she says. "The woman I left my wife for, she used to like to smoke crack and freebase. We were doing all kinds of stuff. I almost died once on cocaine, and she dragged me to the bathroom. Just so many times I nearly lost my life. And so today I am a radical, radical Christian."

Ever since she was 15, Harley says, she has had more sexual experiences with men and women than she can count, including an affair with a male pastor, who "was taking me to bed every chance he could." Harley started cleaning up her life 13 years ago.

The good reverend tells us the best way to overcome our own homosexuality is to imagine Jesus as a gay man. "The love and the passion that you feel for another of the same sex, try to see Jesus and try to give him that same passion and love and desire," she says. "He can handle it. He takes it, and he will rework it and give you the deepest, greatest love affair." She whispers: "Jesus is a man. What if he were a gay man and he desired you, and he wanted your body totally for himself? Whoa! What if?"

Jesus appeared to Harley at a church service, she says, sparking her healing process. She credits her relationship with God as the bedrock of her recovery. But the end of the world is coming, she says, when we must face God. "These are end times and it is up to us to get it together," Grace tells us, heating up like a Baptist preacher. "We are going to stand one-on-one naked before God. How is he going to judge us for the actions of our bodies, which is his dwelling place? Every time we go down into the filth, we take Jesus with us!"

Harley cools down. Politically correct people do not understand that gay people "taint" others around them, she says, and so gays should be barred from the Boy Scouts of America. "Birds of a feather flock together," Harley tells us. "It's not in the Bible, but it's true. You can't have a homosexual buddy and think you are going to be buddy-buddy and nothing [will get] off on you. You will become tainted and corrupted. Why do you think they have commercials on television? If you watch any commercial on television long enough, you are going to buy the product even if you don't like it. It is just in you, and that is what the spirit of homosexuality is about -- it's just in you."

The three of us stand in a circle. We hold hands and pray. Harley put her hands on our shoulders. She asks God to help us feel better.