In "Machete Season," 10 Hutu men recall how they enjoyed slaughtering their neighbors with machetes and clubs -- and six years after the Rwanda genocide, feel no guilt. 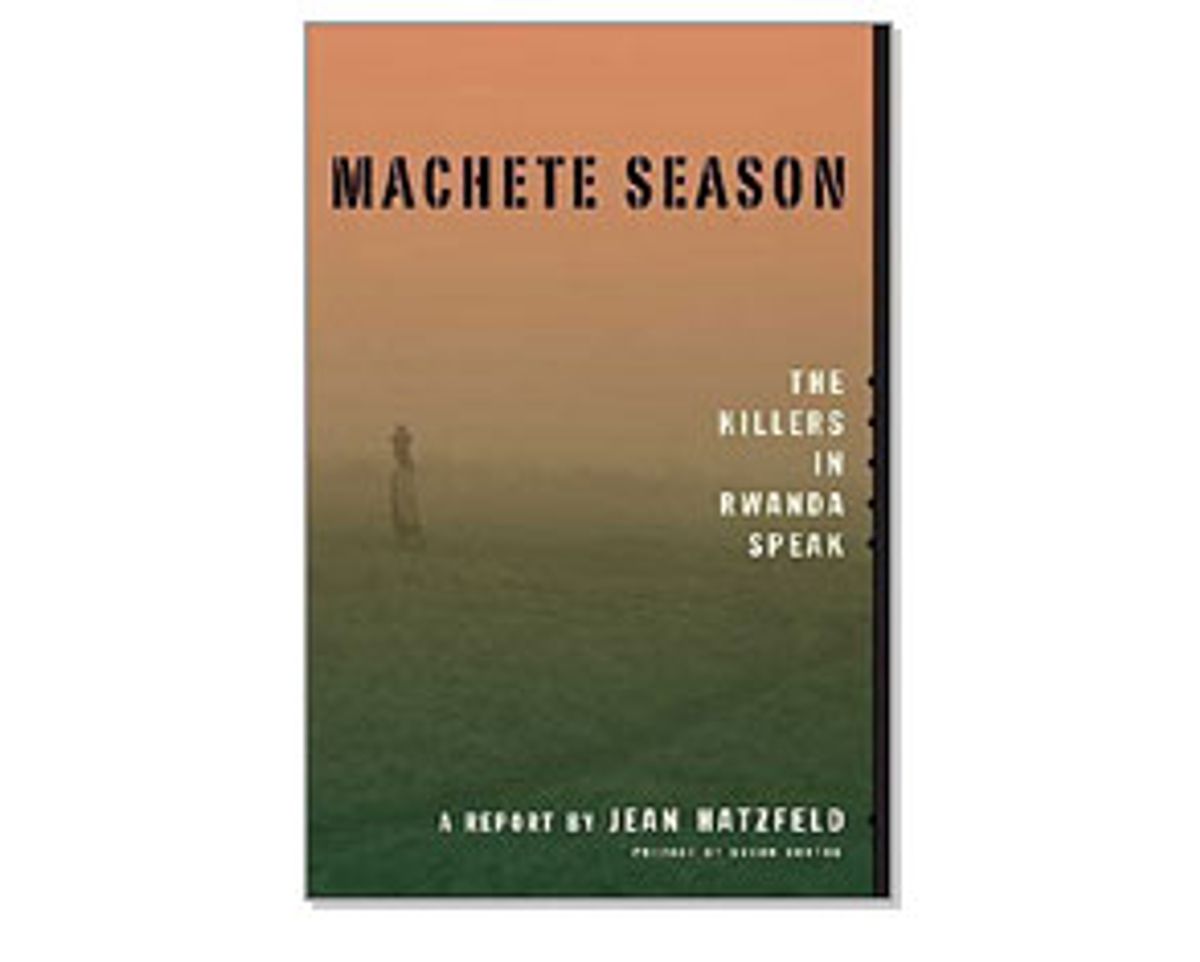 The 1994 Rwandan genocide was ignored by most of the world as it raged on. But in years since, the horrific event that claimed 800,000 deaths has garnered worldwide attention, thanks to numerous books and documentaries, and even a Hollywood film. Philip Gourevitch's masterly "We Wish to Inform You That Tomorrow We Will Be Killed With Our Families," based on his dispatches from Rwanda for the New Yorker, became an award-winning bestseller. Romeo Dallaire, the United Nations commander stationed in Rwanda at the time, recently participated in a documentary based on his own memoir "Shake Hands With the Devil." And last year, the tragedy of the slaughter was brought to the big screen in the surprisingly good "Hotel Rwanda," a film starring Don Cheadle that managed to grab three Oscar nominations.

These renderings of the genocide include many unfathomable images of men furiously hacking at other men, of whole communities decimated while seeking refuge in church, of bloated, days-old bodies choking the country's rivers. As by now most people know, in Rwanda, the vast majority of the Hutu population participated in the mass killing of their fellow Tutsi countrymen (as well as Hutu moderates) in only 100 days, a little more than three months. The killing was done without the efficient aid of gas chambers or bombs or machine guns; instead, most of the murders were of the one-on-one sort -- a very personal, laborious killing in which many, many people willingly, almost enthusiastically, took part.

Although Western writers and artists have attempted, and will continue attempting, to translate the reality of a mass extermination, it's a nearly impossible task. They succeed in many ways, but what they can't quite get across is technical: What is it like for one entire population to kill another, day after day, for an entire season of the year? Did the men go to work too? Did they make love at night, and wake up and kill in the morning? Did they read books, get drunk, tell bedtime stories -- all after a day's kill? Did they cry?

"Machete Season: The Killers in Rwanda Speak," the second book on Rwanda by French journalist Jean Hatzfeld, attempts to answer some of these questions, and gives this madness a shocking sort of order. Hatzfeld interviewed 10 Hutus six years after the genocide, while the men served time in jail. These Hutus were from the rural Nyamata district (population 119,000), which includes a small town and 14 surrounding hills (Rwanda is lush and mountainous) split almost half between Hutus and Tutsis. Beginning in April 1994, within six weeks, five out of every six Tutsis in Nyamata were killed.

The 10 men, ranging from 20 to 62 years of age, hailed from these hills, where most of them were farmers. "None of them has ever quarreled with his Tutsi neighbors over land, crops, damage, and women," Hatzfeld writes. In fact, they lived next door to Tutsis, played soccer with them, went to church with them. "But these ten banded together," Hatzfeld explains, "because of the proximity of their fields, their patronage of a cabaret, and their natural affinities and shared concerns." Hatzfeld gives the reader a basic sense of who the men are -- the little detail already provided in this review -- but he wisely lets the men talk first before proffering their proper biographies. "That bunch was famous on the hill for carousing and tomfoolery," said Clementine, a local Hutu who is married to a Tutsi. "Those fellows did not seem so bad."

The Rwandan genocide officially began after the death of President Juvénal Habyarimana, a Hutu, whose plane was mysteriously shot down on April 6, 1994. The death of the president was the excuse the Hutu extremists needed to begin the killing that they had long planned. (Obviously, Rwandan history is ever more complicated: Hutu extremists had long been paranoid about Tutsi power; at various times Tutsis had suffered, and been slaughtered, at the hands of Hutus; a group of exiled Tutsis organized the Rwandan Patriotic Front, with whom Habyarimana had signed peace accords in 1993. Later, the RPF would enter Rwanda and stop the genocide.)

Hatzfeld's band of ordinary Hutus, incited by extremists broadcasting on the radio, gathered together, singing songs and screwing around, and then headed down to the marshes where they believed the Tutsis were hiding. The new killers indeed bonded immediately: "We gathered into teams on the soccer field and went out hunting as kindred spirits," said Ignace. "We had to work fast, and we got no time off, especially not Sundays -- we had to finish up," said Elie. "We canceled all ceremonies. Everyone was hired at the same level for a single job -- to crush all the cockroaches."

The most difficult part of all of this is to comprehend the moment when men become killers. The Hutus claimed not to have been forced to kill, though they did fear the consequences of not joining in at the beginning. By the time of the interviews, killing strikes them as quite normal. It's not as though their first kill is particularly memorable. Still, they attempt to recall it:

Fulgence: "First I cracked an old mama's head with a club."

Alphonse: "I was quite surprised by the speed of death, and also by the softness of the blow."

Adalbert didn't remember the "precise details" of his first kill: "Therefore the true first time worth telling from a lasting memory, for me, is when I killed two children, April 17."

They meditate on murder like this throughout the book. Elie: "The club is more crushing, but the machete is more natural. The Rwandan is accustomed to the machete from childhood. Grab a machete -- that is what we do every morning." Alphonse: "Saving the babies, that was not practical. They were whacked against walls and trees or they were cut right away."

Indeed, especially for farmers, slicing at things was routine. The men use the word "cut" to describe their murders, as if what they did was akin to dragging a paper edge across a thumb. Obviously it's a callous way of distancing themselves from their deeds, but it also signals the parallel they saw between hacking Tutsis and working in the fields.

Yet, there were differences. "Killing was a demanding but more gratifying activity," said Pio. "The proof: none ever asked permission to go clear brush on his field, not even for a half-day." Soon it became addictive, and there were rewards: "We could no longer stop ourselves from wielding the machete, it brought us so much profit." The looting that accompanied the killing was dazzling for the poor farmers, and it offered a way for the women to pitch in (though some women and children did kill). They stole everything -- some even grabbed the bloodstained clothing of the dead. "If you went home empty-handed, you might even be scolded by your wife or your children," one man said. And despite knowing that their husbands were out raping women and then killing them, most wives still made love to their husbands at night.

Many men insisted that this life -- the one where they woke up and killed people all day -- was a better one. "Man can get used to killing, if he kills on and on," said Alphonse. Fulgence went one step further: "The more we saw people die, the less we thought about their lives, the less we talked about their deaths. And the more we got used to enjoying it."

As the killing went on, the men became intoxicated by the idea of "finishing the job." The idea appears to have been that when it was all over, the Tutsis would be gone, and there would be no reminder of them. So the drive to kill every last Tutsi became more ferocious. In Nyamata not one bond of friendship spared a life, writes Hatzfeld; unlike in Nazi Germany, for example, Tutsis found "not a single escape network."

But there was another key component to the genocide's ferocity: No one was watching. There is nothing so damning in "Machete Season" as when the men speak of the "whites." One man suggests that the idea of genocide germinated in 1959, when Hutus massacred many Tutsis "without being punished." And in 1994, Hutu extremists gradually realized that the world was averting its eyes from the present atrocities as well. "All the important people turned their backs on our killings," said Elie. "The blue helmets, the Belgians, the white directors, the black presidents, the humanitarian people, and the international cameramen, the priests and the bishops and finally even God ... We were all abandoned by all words of rebuke." Pancrace agreed: "Killing is very discouraging if you yourself must decide to do it ... but if you must obey the orders of the authorities ... if you see that the killing will be total and without disastrous consequences for yourself, you feel soothed and reassured."

These were ordinary men, for sure. And ordinary men would have feared the punishment of others; as soon as the West pulled out of Rwanda they knew they were free to kill. It's clear that if some force had been monitoring them, at least some of the motivation to kill would have withered away. Fittingly, one of the chapters in the book is titled "A Sealed Chamber."

Perhaps not surprisingly, because of this long absence of condemnation, the men have no regrets. "I want to make clear that from the first gentleman I killed to the last, I was not sorry about a single one," said Leopord. Hatzfeld notes in amazement that the killers speak in monotone and "never allow themselves to be overwhelmed by anything." During the men's seven years in prison, they knew of not one Hutu suicide. If they were depressed, it was only because they were locked up. "Aside from the anguish of my years in prison," said Pancrace, "I do not see my life as harmed by all these regrettable events." The unfortunately candid Elie takes a stab at remorse: "In prison and on the hills, everyone is obviously sorry. But most of the killers are sorry they didn't finish the job."

"Machete Season" is realistic and, above all else, terrifying; Hatzfeld brilliantly organizes his subjects' stories for maximum effect. His method captures the rhythm of a genocide -- the cold, workmanlike, fierce nature of its repetition. The book goes on and on, the killers are still alive, they persist, they won't stop talking. Just when you think they won't mention their machete again, it's back.

When the men return home from jail, it's to a country in trauma. "The silence on the Rwandan hills is indescribable and cannot be compared with the usual mutism in the aftermath of war," writes Hatzfeld. What Hatzfeld suggests is the possibility of an Africa in turmoil because of many of its people's learned fatalism. Perhaps the most terrible line in "Machete Season" is spoken by Pio, who noted with astonishment the silence with which the Tutsis confronted their deaths, even as he came near to where they hid in the marsh, machete in hand. They did not fight back. They did not cry out. "They felt so abandoned they did not even open their mouths."