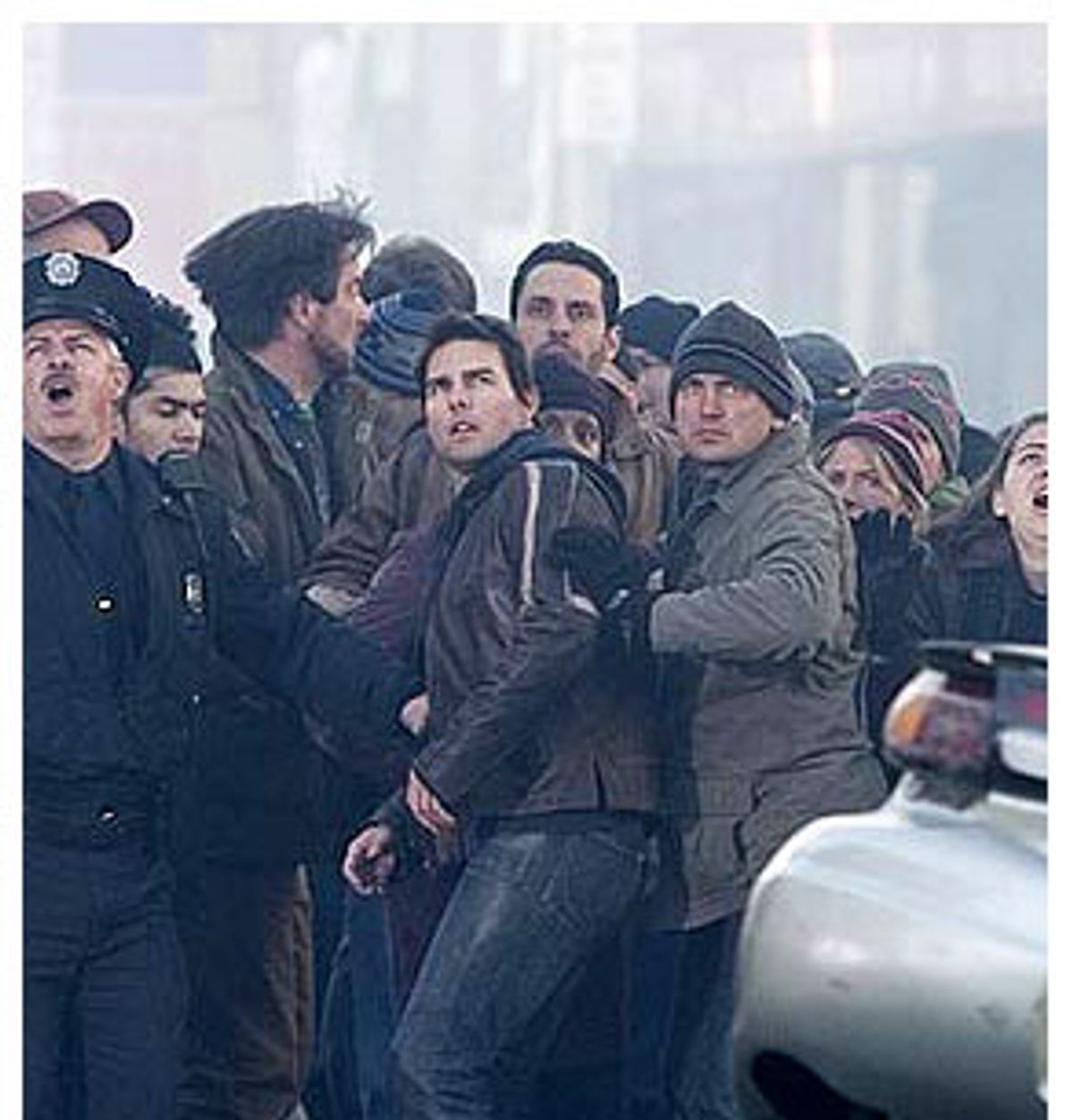 Earlier in the week Slate's Tim Noah wrote an impassioned essay decrying Steven Spielberg's abuse of 9/11 imagery in "War of the Worlds," and singled me out as one of the only critics (in reality, there were a few others -- but not many that I could find) who were similarly appalled and troubled by the picture. Then on Wednesday Slate movie critic David Edelstein -- who, in addition to being my friend, is also a critic I admire and respect above nearly all others -- responded to Noah (and, more indirectly, to me) with a vigorous and carefully reasoned defense of the movie as a valid response to 9/11. He did refer to my and Noah's reaction to "War of the Worlds" as "screwy" -- which maybe was intended as a kind way of saying, "You're being too damn sensitive about a recent national tragedy!" If there is a kind way of saying that. In any event, nothing Edelstein, or anyone, can say will change my mind about "War of the Worlds": My screwy position is, at this point, more firmly and defiantly screwed in than ever.

The response I had to "War of the Worlds" was immediate and visceral. This wasn't a case of my needing to go home and reflect on the movie's deeper meanings, to make sure I was giving enough credit to Spielberg's complex emotional nuances and political perspicacity, or to marvel at his ability to grasp the idea that -- by golly, yes! -- if giant, scary aliens came to Earth and started frying and eating us poor innocents, the whole scene would look a lot like 9/11. I've gotten a few letters from faithful readers of both Salon and Slate who were puzzled (or at least fascinated) by the idea that Edelstein and I could have such divergent readings of the same picture. I don't think the difference in our responses is all that remarkable; what's more interesting, I think, is how strong our feelings were, in comparison with those of so many other critics across the country. (More on that later.) That alone is proof that if you sit down in front of a movie and open yourself wholly to it -- maybe that's the job of a critic in a nutshell -- you run the risk that it's going to hit you right where you live.

And "War of the Worlds" hit me like a sucker punch. I felt as if I'd been beaten up. Was I deeply moved by Tom Cruise's desperation to save his daughter (Dakota Fanning) at all costs? Not one bit, because Cruise's hero stance was dependent on about 30 vivid close-ups of the terror on Fanning's face -- and I'm talking realistic terror, not cartoon terror. Terrorizing children is the cheapest trick in the movie book (as Edelstein himself recognizes -- he makes it pretty clear in his brief but pointed review of "Amityville Horror"). But in "War of the Worlds" it's supposedly OK because big daddy gets to be the hero -- it's a metaphor for the need to keep our children safe at all costs -- and the child's terror is the small price we have to pay so Cruise can jump through flaming hoops to prove what it means to be a good parent. I think "War of the Worlds" is designed to pluck at parents' fears and deep-rooted feelings of responsibility in the worst way -- maybe it's more parent abuse than it is child abuse.

Edelstein's right when he says that good science fiction often alludes to conflicts with other countries. (That said, I'm not a big fan of reading all '50s sci-fi as a response to Cold War fears -- not because I think that reading is invalid but because writers often spend 5,000 words ruminating on a point that could be made in a succinct 20, and end up missing too many of the subtler, more interesting elements of these movies.) But even though science-fiction is allowed to be, or even expected to be, about larger issues, moviegoers have every right to bristle when a filmmaker uses images of real-life suffering -- in this case, images of a tragedy that, for the citizens of New York at least, is still pretty raw -- for something so puny as dramatic effect. There's nothing inherently wrong with invoking 9/11 metaphorically (and many artists have already done so); but using it as a cheap prop, as Spielberg does, makes him clueless at best and callous at worst. What's more, I don't share Edelstein's confident certainty that most viewers will recognize that it's not just a popcorn movie, considering how many critics -- who allegedly think about movies harder than most civilians do, and note my sly and clever use of the word allegedly -- have seen it as a popcorn movie. While quite a few critics made it clear that "War of the Worlds" was genuinely, and seriously, terrifying, I was amazed at the number who saw it mostly as entertainment. If you don't believe me, check out a sampling of quotes from Rotten Tomatoes and see how many referred to "War of the Worlds" as "a summer fun ride" or some such. Even the Times' eminently reasonable A.O. Scott called "War of the Worlds" "reasonably entertaining."

I know I certainly found those 9/11-style missing-loved-ones fliers shown briefly in the film the laff riot of the season. But I've already had my say on that, and anyone who isn't convinced by now isn't likely to be. The only point to be made, I think, is that "War of the Worlds" does prove how deeply and, sometimes, contentiously movies can divide us, particularly when we let them in close. As most critics do, I suppose, I get a lot of letters from people who believe I take movies too seriously: "Lighten up! It's only a movie!" But movies are so much more than "only." Sometimes they help us define what means the most to us -- not just in the world of entertainment but in real life.