A Marine who fought in Fallujah is trying to become the first Iraq war vet to serve in Congress -- and give Democrats hope that Ohio is not permanently lost. 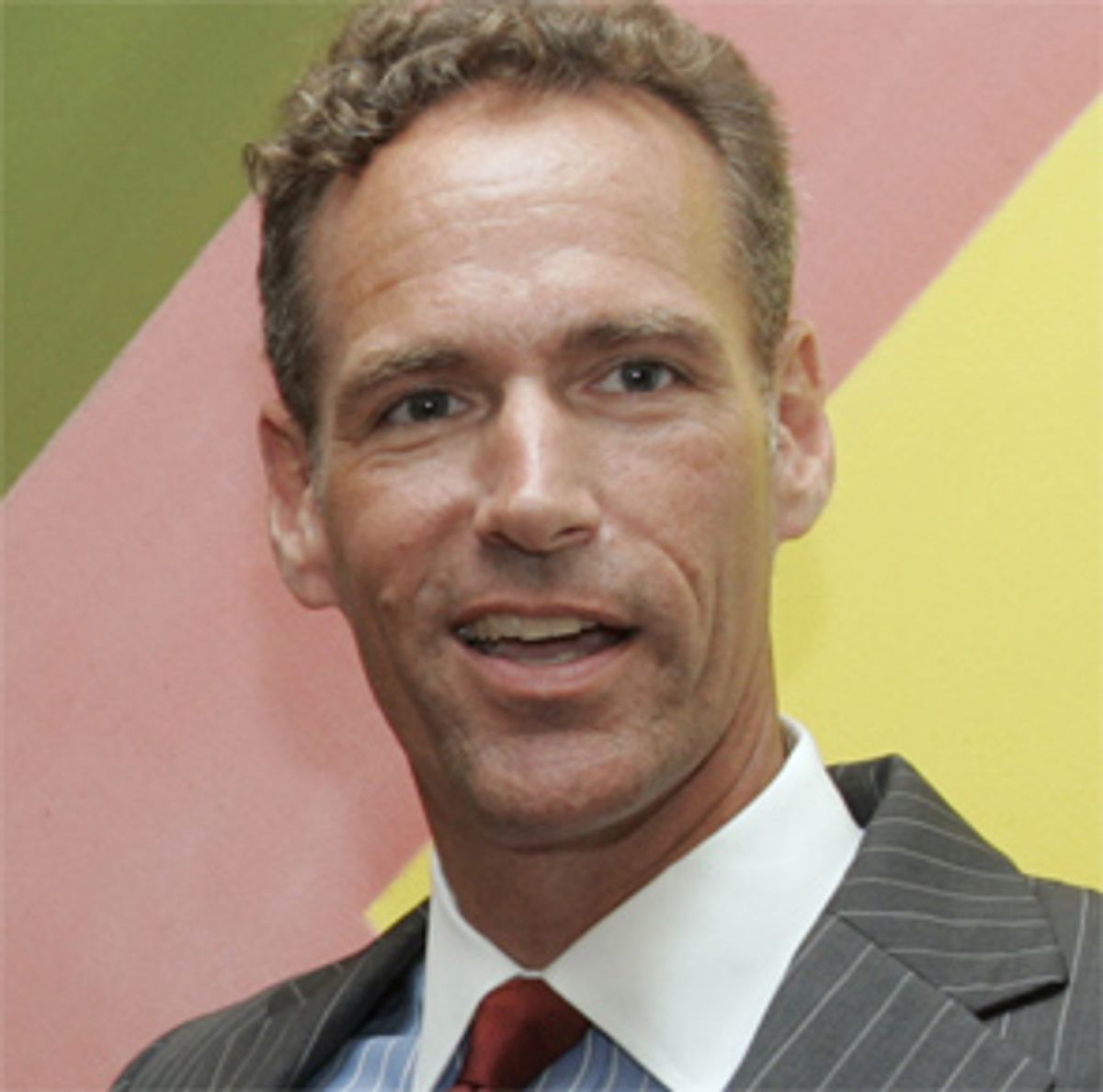 Paul Hackett remembers being in Kuwait, waiting to be shipped home after a seven-month tour of duty in Ramadi and Fallujah, watching CNN America with his fellow Marines. What he saw enraged him. "All I saw on TV was Terri Schiavo," he says. "The federal government and the Florida state government came screeching to a halt to intervene into the private lives of this family during this tragic time ... Like that scene out of 'Network,' I felt like the guy who stood in the spotlight and said, 'I'm mad as hell and I'm not going to take it anymore.'" Not long after he returned to Ohio, he decided to run for Congress.

Hackett, a 43-year-old personal injury lawyer and Marine Reserve major who volunteered for service in the Iraq war, has little prior political experience, only having served as a city councilman in a small town. But he's a contender in a special congressional election taking place in Ohio on Aug. 2 to fill the 2nd District seat vacated by Republican Rob Portman, who's now serving as the U.S. trade representative.

Hackett, a Democrat, is surely the underdog. The 2nd District, which includes Cincinnati, has been solidly conservative in a state that's thoroughly dominated by the GOP and that decided the 2004 election for President Bush. His better-funded opponent, Jean Schmidt, is well-connected and, as a former state representative, has a more extensive political résumé. But Hackett hopes his credentials -- Iraq war vet and plain-spoken self-described moderate -- will give him a much-needed edge.

Hackett hopes he's part of a seismic political shift happening in Ohio -- a shift driven in part by recent outrage against Ohio Republicans over a high-profile, multimillion-dollar accounting scandal that has cast a cloud over the state party and may find its first political fallout victim in Schmidt, the first major Republican candidate to face the voters since the scandal broke.

A victory for Schmidt would mean continued Republican dominance in this district that voted 65 percent in favor of Bush last November. If Hackett wins, however, it would make him the first Iraq war veteran in Congress -- and would also give Democrats hope that Ohio has not gone completely and irreversibly to the GOP.

On the issues, the candidates both describe themselves as fiscal conservatives, but on the Iraq war and the so-called moral values questions, they stand in stark relief. Hackett is a critic of Bush's Iraq war policy and believes America was led to war unnecessarily. Schmidt is a strong backer of Bush's handling of the war. Hackett is pro-choice. Schmidt is president of Cincinnati Right to Life. Schmidt voted against gay marriage in the Ohio House of Representatives, while Hackett's take is: "Gay marriage -- who the hell cares?"

Hackett, who is married, says he doesn't feel the need to defend his marriage through the national Defense of Marriage Act, or any other anti-gay marriage legislation. "If you're gay you're gay -- more power to you," he said. "What you want is to be treated fairly by the law and any American who doesn't think that should be the case is, frankly, un-American."

Hackett's left-of-center views on social issues may not go over well with conservative Ohioans, and Schmidt is so far beating him financially, but last week Hackett got a profile boost when former Democratic Sen. Max Cleland campaigned with him. By bringing in Cleland and highlighting his military service, Hackett hopes to neutralize any criticism Schmidt could levy concerning his stance on the war.

Schmidt commends Hackett for his service, but believes Hackett should "stand with the president" by "supporting the Iraqi war effort and our troops that are over there," her campaign manager Joe Braun said. (Through Braun, Schmidt declined to speak with Salon.) When asked to answer that charge, Hackett is blunt: "The only way I know how to support the troops is by going over there." He doesn't hesitate to criticize Schmidt's support of the war: "All the chicken hawks back here who said, 'Oh, Iraq is talking bad about us. They're going to threaten us' -- look, if you really believe that, you leave your wife and three kids and go sign up for the Army or Marines and go over there and fight. Otherwise, shut your mouth."

In spite of her endorsement from the NRA, Hackett steals some of Schmidt's thunder when it comes to guns. Hackett says he's an NRA member and, when asked about gun control, he answers with an old saw: "Gun control is when you point your gun and hit what you aim for." Local pundits have noted Hackett's macho appeal to the crossover voter (his time in the Marines, his 6-foot-4-inch frame, his blunt talk), and Hackett acknowledges this appeal is further enhanced by his hands-on appreciation for hunting and gun culture.

With only a week to go before the election, it's hard to gauge the state of the horse race. Given his limited financial resources, Hackett says he decided not to commission any polls. Braun says the Schmidt camp has done "tracking" but declined to release any specific numbers. Braun does, however, see Hackett as a legitimate contender.

And recent ethical questions surrounding Schmidt's campaign may work in Hackett's favor. Among other things, Schmidt had to pay back $644 for a gift she took last fall from a lobbyist but failed to report as required by law. The lobbyist worked on behalf of the Chiron Corp., which was at the center of last winter's flu vaccine controversy. Schmidt enjoyed a free dinner and then a free Cincinnati Bengals game courtesy of the lobbyist, but claimed she didn't know the gift came from the lobbyist. Rather, she has said, she thought the tickets came from former Bengals quarterback "Boomer" Esiason.

Then there's the $10,000 that Schmidt's campaign accepted from one of Tom DeLay's political action committees. Hackett criticized Schmidt for taking DeLay's money. "Tom DeLay," says Hackett, "is the poster child for corruption in Washington." Braun dismisses Hackett's criticism as political opportunism and says, if the situation were reversed, Hackett would take $10,000 from the Democratic leadership.

Finally, a Cincinnati paper ran a report last week suggesting that Fritz Wenzel, Schmidt's media manager, was working for her campaign while simultaneously working as the top political reporter and columnist at the Blade, Toledo's news daily and a major Ohio paper. Wenzel's last day at the Blade was Friday, May 13. Two weeks before he left to become a political consultant, according to the report, Wenzel made scathing comments about Schmidt's Republican primary opponents on a personal blog he maintained. The blog entries have since been pulled off the Web, and reports filed with the Federal Election Commission show that Wenzel's company, Wenzel Strategies, was paid $30,000 on Monday, May 16, by the Schmidt campaign.

May 16 was also the day his last column ran in the Blade, but Wenzel made public his plans to start a consulting business weeks prior to that. Braun praises Wenzel's work and denies Wenzel was working for Schmidt inappropriately. Wenzel and Braun both claim Wenzel drummed up the work for Schmidt over the weekend after he left the Blade. "I had a busy weekend," Wenzel reportedly told the Cincinnati paper. Hackett doesn't buy this explanation. "It's more of the same," he says, lumping this alleged ethical lapse in with the others. "If it looks like a duck and quacks like a duck, it's a duck."

It's unclear how damaging any of these ethical questions will be for Schmidt as the campaign hits its home stretch.

At present, both campaigns say they're going full bore. Braun feels Schmidt's chances are good, but confines himself to saying, "We're working hard." As for Hackett, he knows he's got an uphill challenge, but says he's ready. "There's nothing about this election that can faze me," he says. "After Iraq, everything seems like a walk in the park."