When your mission is failing, is it enough simply to rename it? Not if you care about credibility. 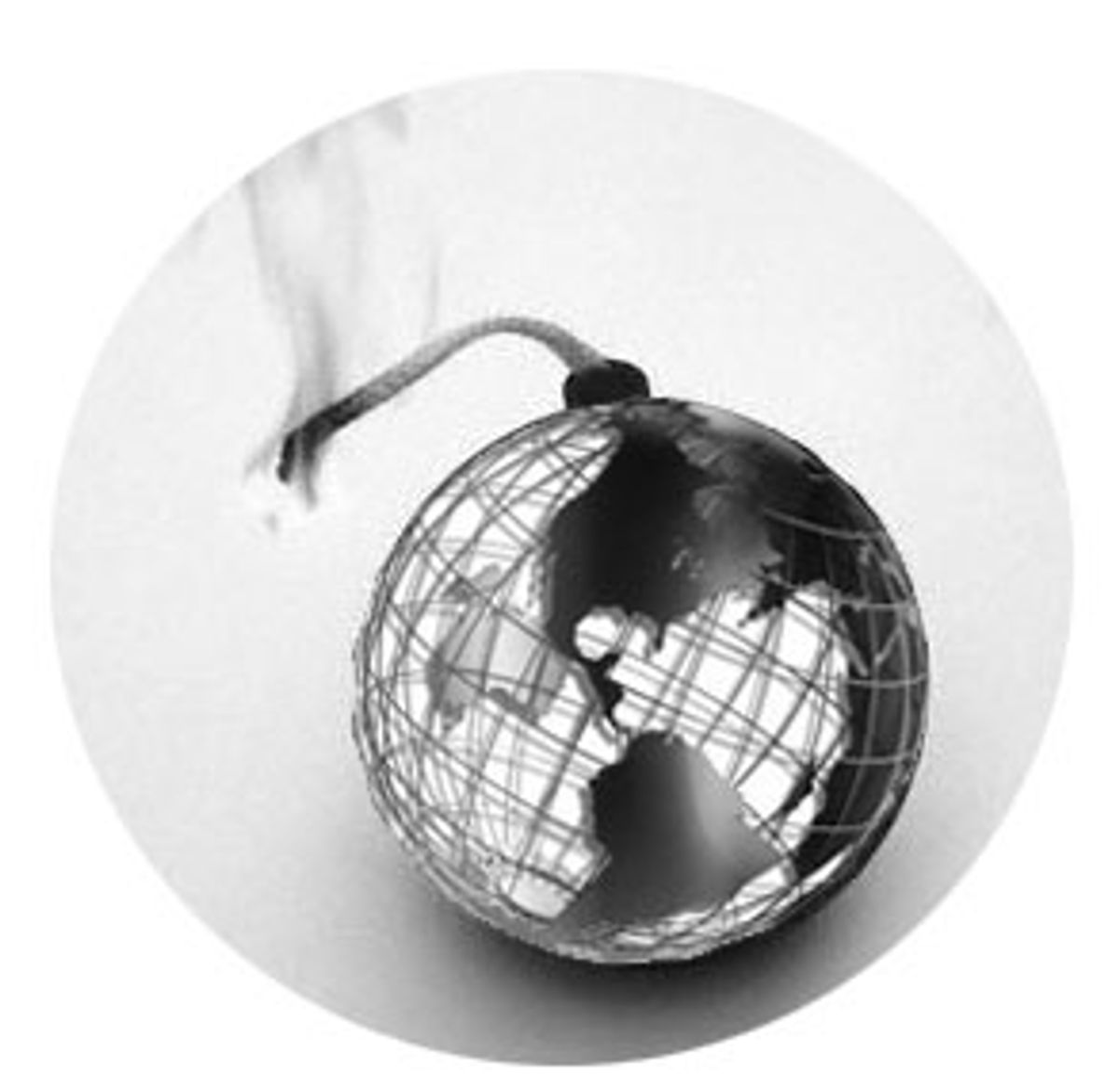 Never before has a president suddenly discarded his self-proclaimed "mission." But after declaring himself the commander in chief in the "global war on terror," President Bush has tossed the catchphrase aside in an elusive search for a new one. The "global war on terror" was his slogan to link the war in Afghanistan to the invasion of Iraq, the battle supposedly being one and the same. The quest for a new slogan is more than a public relations gesture. It reflects not only the failure but also the vacuum of his strategy.

Since Bush's speech at Fort Bragg, N.C., on June 28, for which the White House asked for and received national television coverage, and in which Bush reaffirmed "fighting the global war on terrorism," mentioned "terror" or "terrorism" 23 more times, and compared this "global war on terrorism" with the Civil War and World War II, his administration has simply dropped the words that more than any others Bush has identified as the reason for his presidency.

Throughout July, administration officials have substituted new words for the old. Instead of trumpeting the "global war on terrorism," Secretary of Defense Donald Rumsfeld and Gen. Richard Myers, chairman of the Joint Chiefs of Staff, have sounded the call to "a global struggle against violent extremism." Medals have been awarded to brave U.S. soldiers stamped "Global War on Terror." Will new medals now be minted?

Myers' change in language involves considerable historical and policy revisionism. He had gone along with Rumsfeld in policies opposed by senior military figures such as former Army Chief of Staff Gen. Eric Shinseki, who was publicly derided by then Deputy Secretary of Defense Paul Wolfowitz for worrying about invading Iraq with a light force. But now Myers presents himself as a secret dissident. In a speech before the National Press Club on Monday, he claimed he "objected to the use of the term 'war on terrorism' before, because if you call it a war, then you think of people in uniform as being the solution."

Myers also reveals himself now to be an ardent internationalist who believes that though the military is carrying the burden, future conflicts demand "all instruments of our national power, all instruments of the international communities' national power." In effect, Myers is repudiating the Bush doctrine of "preemptory self-defense," enunciated in the "National Strategy to Combat Weapons of Mass Destruction" in December 2002 to provide justification for the Iraq war.

"It is more than just a military war on terror," Stephen Hadley, the national security advisor, told the New York Times in an interview this week. "It's broader than that. It's a global struggle against extremism. We need to dispute both the gloomy vision and offer a positive alternative." Hadley, of course, as deputy national security advisor, had confessed responsibility for approving the false 16 words spoken by President Bush in his State of the Union address in January 2002, in which the president claimed that Saddam Hussein was seeking enriched uranium in Niger to build nuclear weapons.

The imperative for a "positive alternative," however, is not to disperse something as nebulous as a "gloomy vision." It has not just dawned on the Bush national security apparatus that a "war on terror" described a never-ending battle against a tactic. Dropping the signature phrase of the Bush presidency is part of an effort to cobble together some sort of expedient political solution that will allow U.S. troops to be drawn down before disaster strikes the Republicans in the midterm elections of 2006. "Shock and awe" has been replaced by stunned and confused. By stuffing the old slogan down the memory hole, the Bush administration has withdrawn credibility from its neoconservative policy. Unfortunately, ideology has consequences.

The new U.S. ambassador to Iraq, Zalmay Khalilzad, has arrived on the bloody scene to warn of impending civil war. But U.S. intelligence does not have an accurate sense of either the number of insurgents or their composition. "That would not be a worthwhile metric," Pentagon spokesman Lawrence DiRita said recently. Thus Rumsfeld's assistant secretary for public affairs acknowledges that he doesn't know precisely who the enemy is.

Some are Sunni Arabs opposed to Shiite and Kurdish domination of a country they ruled from the Ottoman Empire until the U.S. invasion. Some are former members of Saddam's Baath Party's secret police. Others are jihadis who operate like mobile mafias.

"My answer is, bring them on," Bush declared about Iraqi attackers on July 2, 2003. Since then there have been more than 500 suicide attacks in Iraq. Saudi intelligence interrogated about 300 Saudis captured on their way to fight or detonate themselves in Iraq; a Saudi study revealed that few if any of them had previous contact with al-Qaida and that most were motivated by the U.S. occupation. A similar study of 154 foreign fighters by the Israeli Global Research in International Affairs Center reached the same conclusion.

In the face of relentless suicide bomber attacks, U.S. forces have withdrawn as much as possible in the past few weeks to the safety of their bases, drastically reducing their "operational tempo" and cutting casualties to about half those in June.

The insurgents' strategy is not to create another Vietnam. Their forces are not analogous to the hierarchical armies of the North Vietnamese and Viet Cong. Some responsible Sunni sheiks and leaders may be drawn to participate in writing a new constitution, but there can be no full representation of insurgents. Apart from the nearly insuperable obstacles of getting Sunnis to endorse a Shiite Islamic republic and Kurdish autonomy, ultimately there is no "they" there to negotiate with. The insurgents have no concrete program; their game plan, after all, is a bloodbath. If they cannot strike at Americans, garrisoned in their forts, they will kill soft targets such as Iraqi policemen, local officials and even children. Their strategy is to perpetuate anarchy, perhaps triggering a civil war: the worse, the better; their models are Lebanon and Somalia.

"Bush is in a tough spot, one of his own making," retired three-star Marine Gen. Bernard Trainor told me. "Bush has to try to make the best of a bad hand. This administration did not really pose the what-if and what-then questions in planning. Now I hope they are. I haven't seen evidence of it yet. I'd like to think that people in the second and third tier understand. Whether the top three understand -- the president, [Dick] Cheney and Rumsfeld -- I don't know. It's hard to say. If you look at the evidence of the first administration, the answer would be no."

While other administration officials tried out the new post-war-on-terror slogans, Bush's longtime packager Karen Hughes, nominated as undersecretary of state for public diplomacy, testified in her confirmation hearing before the Senate last week. Her rhetoric was filled with high-flown abstractions about "limits on the power of the state" and "respect for women," and stentorian phrases against "tyrants" and in favor of "freedom."

But U.S. diplomats in Iraq must attempt to negotiate through Iraqi ethnic, religious and sectarian politics to help produce a settlement that "doesn't quite live up to Jeffersonian principles," said Trainor. Women's rights, for example, will almost certainly be undercut in the new constitution. And Shiites are insistent that the new state be Islamic. "Right now the goal is to get the Iraqi national security forces into some sort of reasonable shape and draw down our forces. Our presence is an irritant, but perhaps it's a lesser of evils, at least for the time being. These are the things that should have been discussed early on." (Trainor's book, "Cobra 2: The Inside Story of the Invasion and Occupation of Iraq," coauthored by Michael Gordon of the New York Times, will be published next year.)

In the closing days of the 2004 election campaign, President Bush returned time and again to the theme that aroused the most fervent support for him. "The outcome of this election will set the direction of the war against terror, and in this war there is no place for confusion and no substitute for victory." He ridiculed his Democratic opponent, Sen. John Kerry. "His top foreign policy advisor has questioned whether it's even a war at all, saying that's just a metaphor, like the war on poverty," Bush said. "I've got news: Anyone who thinks we are fighting a metaphor does not understand the enemy we face and has no idea how to win the war and keep America secure."

But that "war," like the campaign, is over, and it has been rebranded. A new metaphor has been ordered up for duty. Just as Bush has leapt from reason to reason for the Iraq war, from weapons of mass destruction to the "march of freedom," so he now jumps from slogan to slogan. His changeability, in the short run, according to Trainor, may be a hazard. "Bush has to keep up a brave front. If he shows any signs of changing course perceptually, that could be a problem for him not only domestically but also on the battlefront. Any backing off from the hard position has a strong chance of giving encouragement to those who wish us ill. What happens when you aren't seen as exercising control? What happens when you are seen as less than all powerful? That's the position they are in right now."

The undermining of democracy by sacrificing credibility to justify endless war was early described by the historian Thucydides in his "History of the Peloponnesian War": "The meaning of words had no longer the same relation to things, but was changed by them as they thought proper. Reckless daring was held to be loyal courage; prudent delay was the excuse of a coward; moderation was the disguise of unmanly weakness; to know everything was to do nothing. Frantic energy was the true quality of a man."