The porking of the energy bill

How $1.5 billion was slipped into legislation in the dark of night for an energy industry outfit in -- where else -- Tom DeLay's hometown. 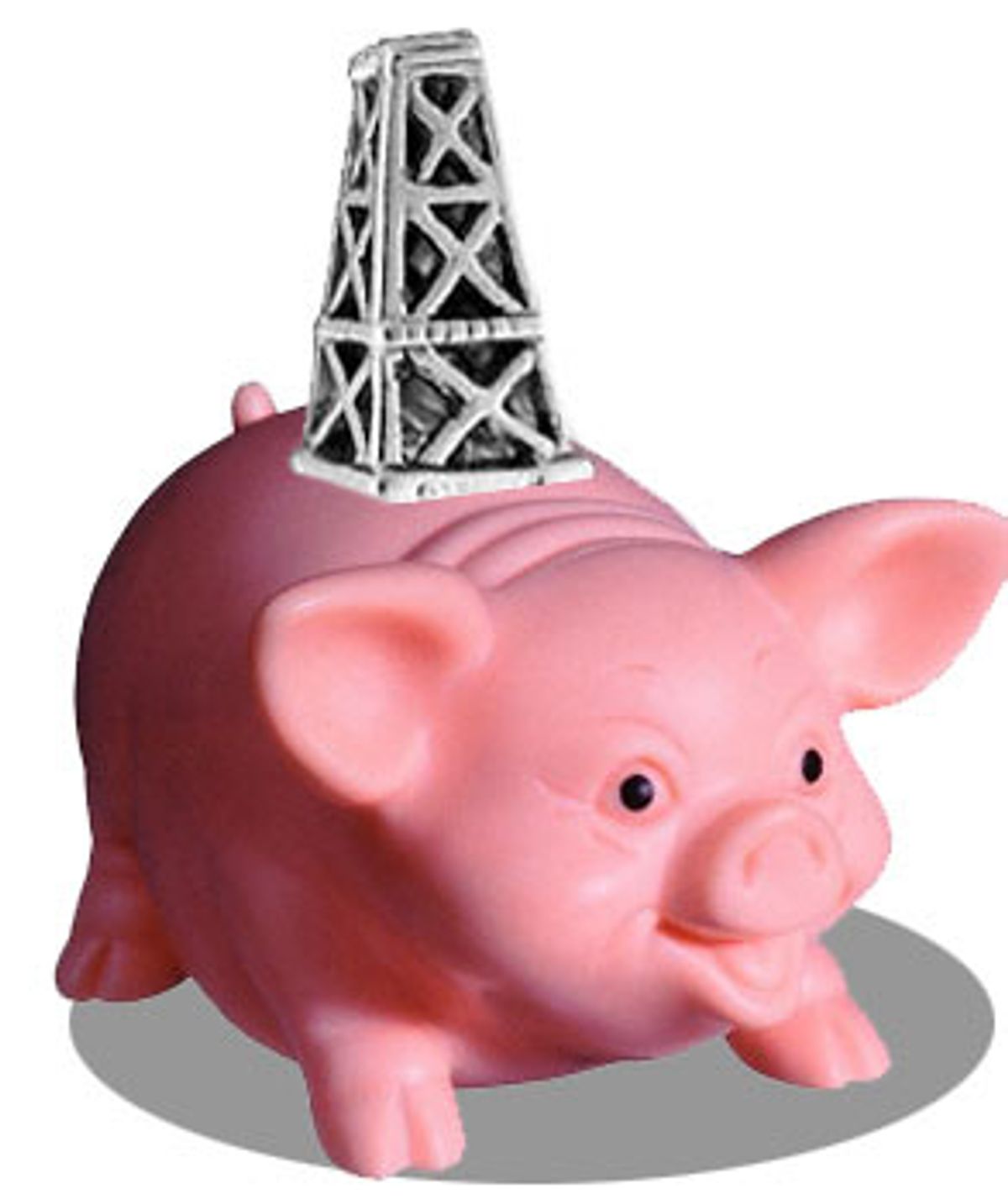 House Majority Leader Tom DeLay likes to joke that big government "died with disco." But in recent years, DeLay has done what he can to keep up the groove, at least for projects that involve his hometown, Sugar Land, Texas. He has helped funnel millions of taxpayer dollars to the nearby Johnson Space Center and the M.D. Anderson Cancer Center. And he isn't done yet. "He's looking to build a new gimmick to act as a sponge for federal pork," says Keith Ashdown, vice president of Taxpayers for Common Sense.

At some point early Tuesday morning, DeLay appears to have found just such a thing. In an 11th-hour deal, House and Senate leaders inserted language into the energy bill that could funnel as much as $1.5 billion through a Sugar Land nonprofit to fund research and development for "ultra-deepwater and unconventional" natural gas drilling. The deal has been in the works for years -- versions of the proposal passed the House in several bills that did not become law -- but rank-and-file Democrats in the House have cried foul over the process.

"Members of the conference committee had no opportunity to consider or reject this measure," complained Rep. Henry Waxman, D-Calif., in a letter to House Speaker J. Dennis Hastert, R-Ill., on Wednesday. That is because the ultra-deep program appeared in the final version of the energy bill only after the last meeting for amendments had been gaveled to a close.

House Democrats knew something was afoot on Monday night. Around 7 p.m., they received an e-mail with the ultra-deep language, hours after the deadline for final amendments. "I just got this thing on my BlackBerry," said one Democratic aide who worked on the bill. "I was like, What the heck is this?" The e-mail was not mentioned by House and Senate negotiators as they worked well into the night to hammer out final changes. Nonetheless, by the following afternoon, ultra-deep had found its way into the bill. "It just got added sometime between 3 a.m. Tuesday and 12 noon," the aide said.

As it turns out, the Democratic and Republican leaders of the House and Senate energy committees, a group called "the big four," had approved the language at the last minute. Fingers still pointed to DeLay as a driver for the program. "This is something that Mr. DeLay obviously has been interested in for a while," said Bill Wicker, a spokesman for Sen. Jeff Bingaman, D-N.M., one of the big four. "He has done a pretty effective job of keeping his fingerprints off of things."

The idea for an ultra-deep-research fund dates back to 1999, when the National Petroleum Council, an Energy Department advisory group, concluded that the nation needed better technology to seek out hard-to-reach gas deposits. A little-known nonprofit called the Gas Technology Institute, which is made up of more than 350 natural-gas-related companies and consultants, decided to begin lobbying for the money. Between 2002 and 2004, they spent $580,000 on lobbyist C. Kyle Simpson, a former Energy Department official, to work the issue on Capitol Hill.

According to a 2003 tax filing, the GTI board of directors includes the top executives of more than a dozen gas companies, including Noble Energy, the KeySpan Corp. and ChevronTexaco. But Melanie Kenderdine, a former Energy Department official who works at GTI, says the real beneficiaries of the ultra-deep program will be consumers. "Far and away the most effective way to increase supply and reduce prices is to invest in technology," she said. "That's where the public interest comes in."

Sugar Land, Texas, enters the picture because a GTI offshoot called Research Partnership to Secure Energy for America (RPSEA), is the leading contender to win the contract to administer the new program. RPSEA members include giant gas-drilling companies like Halliburton and Schlumberger. Kenderdine said RPSEA moved to Sugar Land because the group was offered a rent rebate, not because DeLay calls it home. DeLay's office declined to describe his involvement in the last-minute maneuvers. "Mr. DeLay is always up to date on legislation," said Ben Porritt, a DeLay spokesman.

Critics note that DeLay is not the only pork-hungry politician to exploit the energy bill. Among the other big-ticket items are $80 million for a coal plant in Alaska, $1.25 billion for a hydrogen-producing nuclear reactor in Idaho, and $1 billion in new tax breaks for companies that own natural gas pipelines. "There is not enough policy in this bill to justify all the pork," says Navin Nayak, an environmental advocate for the U.S. Public Interest Research Group. "It's embarrassing."

On the House floor Thursday, Rep. Edward Markey, D-Mass., took the microphone to protest what he saw as a giant giveaway of taxpayer money. He stood next to an oversize poster of an oil rig resting on a photocopy of a Social Security card. "What the Republicans are doing is erecting a huge oil rig on top of the Social Security Trust Fund," Markey declared.

But his protest was just bluster. The fight is over. The bill is expected to reach the president's desk within days. "We thank Mr. Markey for the use of his chart, once again," quipped Rep. Joe Barton, R-Texas, one of the big four, when Markey ran out of time.