Reading "The Wings of the Dove"

Henry James reminded me, once again, that suffering can bring great rewards. 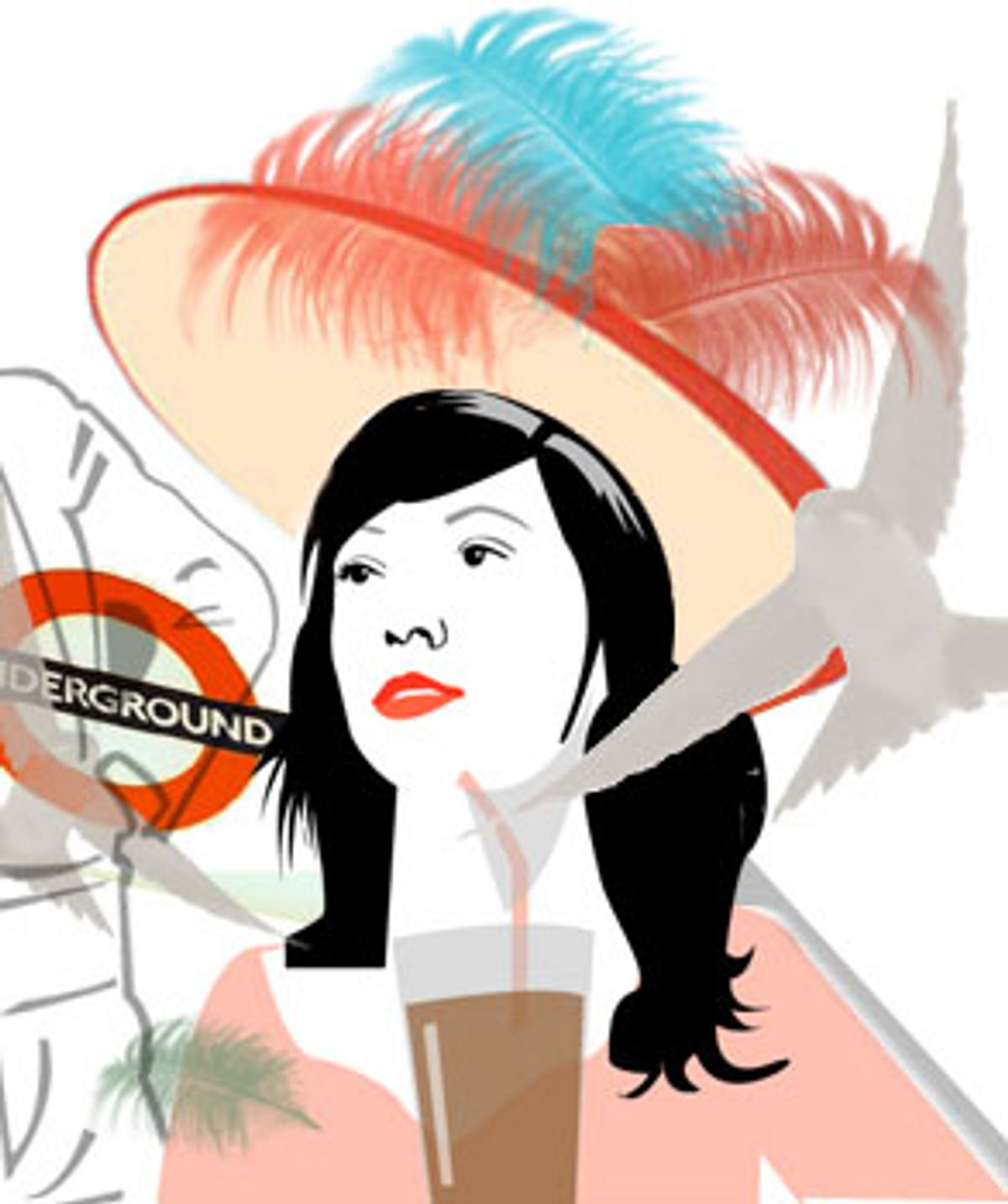 Let's not beat around the bush about suspense here. Like me, you probably saw the Helena Bonham-Carter movie version of Henry James' "The Wings of the Dove before you ever considered reading the book, so you know it's about a love triangle spearheaded by a passionate but ultimately venal British beauty named Kate Croy. She contrives to make her naive and dying American friend Milly fall in love with her own under-financed lover, Merton Densher, the goal being to have him marry Milly, inherit her fortune, and come back around to make Kate both rich and happy. She figures she can wait, and doesn't mind sloppy seconds, but she overestimates herself (and underestimates the others). It works out badly for all of them, of course.

Remembering that the movie opens in the London Underground with an outrageously sexy, wordless encounter between Kate and Merton that leads to some terrific illicit groping in an elevator, I couldn't wait to get reading. Anticipating that liaison was almost enough to make me enjoy traveling by mass transit this July, which is saying a lot for a woman who happens to be nine months pregnant in a heat wave.

Well, a love scene is hardly a typical prelude for James, whose sex is terrifically oblique, and as I would soon find out, that scene in the movie is stolen from a much more restrained and less physical, if nonetheless marvelously erotic, passage nearly a hundred pages into the book. Back in 1997, when the film was released, I was hardly a Henry James fanatic; I didn't question the movie's opening scene any more than I worried about letting the movie spoil the novel for me. But seeing the film did coincide with -- and nurture -- my budding interest in James. "Portrait of a Lady" had been a transformative college experience -- the first time I can remember going from detesting a novel to loving it in the course of a close reading. I didn't like the characters, especially not the heroine, Isabel Archer, but the more I understood the book, the more I came to relish the excruciating complexity with which her needlessly grim fate was realized. I think other people have experienced something similar through jogging or getting tattoos or martyrdom, but it was Henry James who first taught me that pain can be good. The rewards, like endorphins or paradise, are more than worth the burning.

Even so, nearly a decade passed and I didn't get around to "Wings," the novel. It always seemed like a big undertaking -- and there are so many books by Henry James! Precisely that daunting fact led me, a few years ago, along with a few like-minded lost souls, to form a group we have dubbed the South Brooklyn Henry James Society, devoted to reading the entire James oeuvre (though it may take us much of our lives to get through all the stories). We're finally slated for "Wings of the Dove" in the fall, with all summer to work our way through to the exquisitely tragic failure of Kate and Merton's love.

Last month, I bought my copy and sat down next to the air conditioner with my feet up and an iced coffee beside me. That's when I discovered the movie's infidelity and how badly I had, in fact, ruined the book for myself by ever watching it. I kept wondering if maybe it was some film starring Kate Winslet I'd been thinking of, not Bonham-Carter? Or some Merchant Ivory production? Where was that scene with the young heartthrobs bustling and bumping through the Underground, their rendezvous? I felt robbed. And what was with the circuitous conversations between Kate and her father, her sister, or her aunt that were analyzed down to within an inch of the interlocutors' lives (not to mention mine), the narrator pondering their every motive and machination, rather than revealing their relationships? Suffice it to say, the beginning of "Wings" is -- like a lot of James -- heavy going. I kept telling myself to work through the pain, it would pay off eventually, but I was not having fun.

The plot itself is without question unimpeachably juicy, but I knew too much and at the same time expected all the wrong moments. Even when I got to the subway scene, I initially felt let down. Kate and Merton don't touch, much less grope one another. I tried to forget the movie entirely and lose myself in the book; only then did I start to find the odd delightful little moments that make "The Wings of the Dove" so quintessentially Jamesian and so modern (it was published in 1902, a year after the wacky and practically postmodern vampire tale "The Sacred Font"), if not quite R-rated. (You might as well give up any hopes of the literary equivalent of Bonham-Carter's full frontal nudity right now.) Indeed, "Wings" is not just modern, it's precisely about the clash of modernity and tradition, the shifting of moralities across centuries and continents, the loosening of class structure and the diminishing stranglehold of conventional propriety.

Here, for example, is how that subterranean encounter really goes: James informs us that Kate and Merton have been previously introduced at a party. We know there was a spark, but also that Densher is far from up to snuff as far as her family is concerned. Six months pass, and then it's only the "happy hazzard" of their meeting on the train that allows such a socially unequal pairing to evolve. A subway car is surely the very opposite of a drawing room, and the dichotomy precisely illustrates why the union of these two lovers is frowned upon by everyone who matters to Kate -- from her wealthy aunt to her mingy widowed sister to her ne'er-do-well father, all of whom hope she will make a more lucrative match that will somehow benefit them. In the Underground, James tells us that "they were not in the least meeting where they had left off, but ever so much further on," and makes his metaphorical reversal of the usual notion of social advancement delightfully literal: "these added links added still another between High Street and Notting Hill Gate," so that for every station they travel on the crowded train car, the frisson and their intimacy mount. The climax comes when they take an impromptu stroll to Lancaster gate and beyond, and Kate compares herself to "the housemaid giggling to the baker." It's a great moment, so long as you aren't vainly yearning to see Bonham-Carter's gorgeous features smushed in a kiss.

In contrast to Kate and Merton's plebeian and visceral commute, the rich orphan Milly Theale "solemnly rolls" around London in a "public chariot" -- not very sexy. And not very sexy she remains, until she is given a vague but ominous diagnosis by a prominent physician, who tells her that she ought to go out and live life. Without ever directly acknowledging that she is dying, James makes that fact clear, and it is Milly's splendid perversity that her impending death enlivens her. Suddenly, she too takes to London's streets, even its poor neighborhoods and park paths, and wanders amid the populace. "This was the real thing," she observes, as she ventures onto terrain where there are "stretches of shabby grass," "smutty sheep," "idle lads at games of ball," and "wanderers anxious and tired like herself." James's fin-de-sihcle Regent's Park seems remarkably similar to our own early 21st century Central Park, if you just swap the sheep out for dogs or possibly pigeons. All Milly needs is an iced coffee and a different hat, and I'd hardly notice her walking past me on the sidewalk.

Speaking of which, another of the succulent Jamesian details that sung out at me from the psychological narrative morass of "Wings" was the scene in which Milly guzzles iced coffee at a house party. No less than three times in one chapter is Milly's iced coffee made the focal point around which her interpretation of the situation revolves. And she doesn't just drink it, she "gratefully absorbs" it. For James, who only very rarely describes meals or food of any sort, this emphasis is striking. Like the mention of the Underground, it underscores the modernity of the tale -- notably coffee, not tea, and iced, not hot -- in dramatizing the need of the young American for bracing stimulants to clarify the otherwise obscure and murky social situation of a British house party. It also reminded me to go fix myself something cold and at least half-caffeinated (the compromise of choice, given my expectant state) to propel me toward the next modern moment.

Elizabeth Gaffney is the author of the novel "Metropolis."