Lobbyists blithely pour funny money into congressional pockets, serene in the knowledge that ethics committees are a joke. 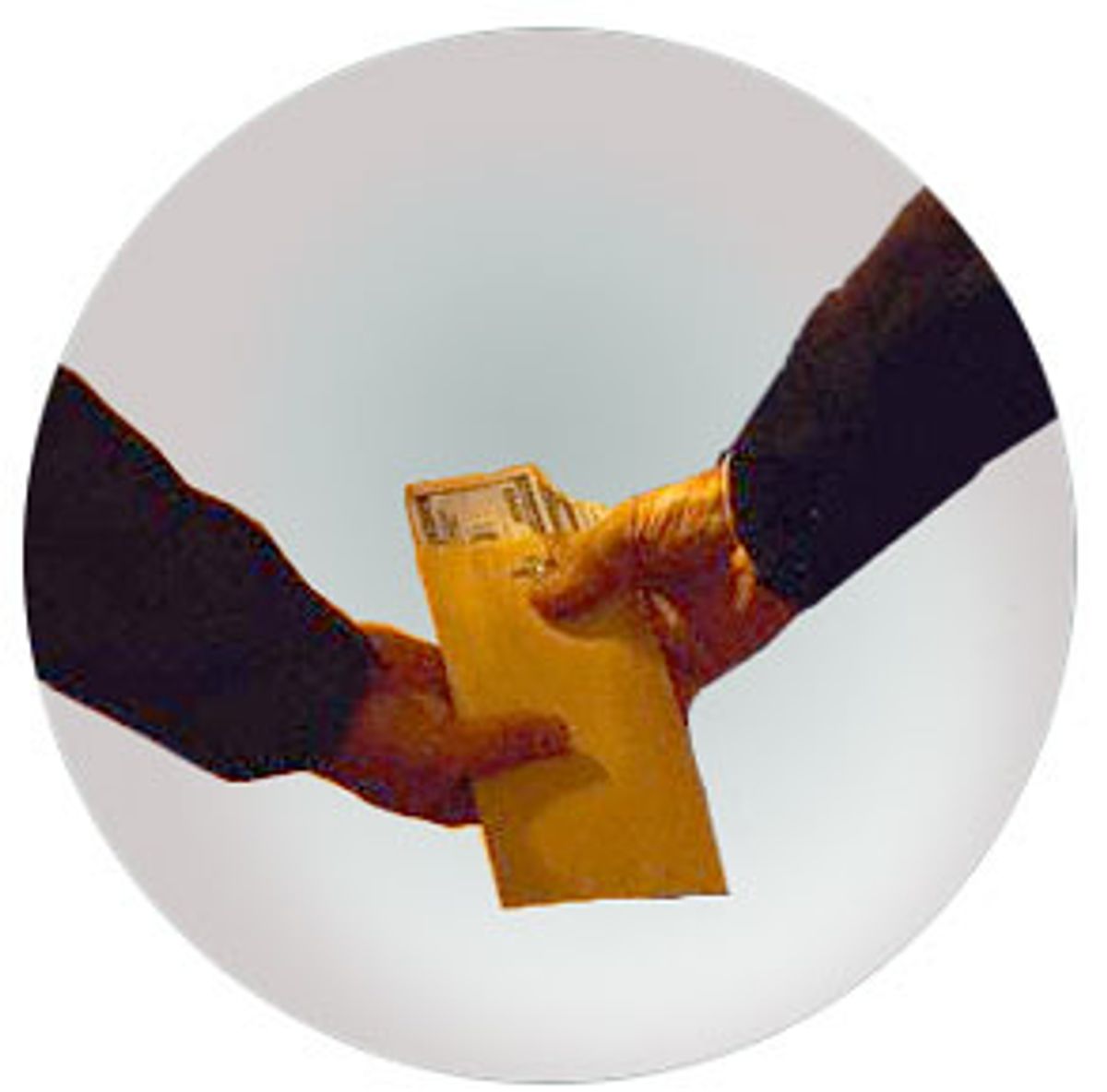 Former U.S. Rep. Pat Schroeder cut a $1,000 check last March to help Rep. Jim McDermott, D-Wash., pay his legal bills. She thought nothing of it at the time. As the head of the Association of American Publishers, she regularly gives money to both Republican and Democratic campaigns. This was just another donation. It also happened to violate congressional ethics rules.

"I gave up a long ago trying to keep up on the latest laws," Schroeder said this week, when she was alerted to her apparent breach. "I wrote a personal check. I really did not know."

Under House and Senate rules, lobbyists like Schroeder can give to political campaigns but are banned from giving money to the legal defense funds of sitting members of Congress. These poorly monitored funds are used by lawmakers to fight election recounts, lawsuits and ethics investigations. But oversight is weak, or nonexistent, and violations regularly occur.

A report by the Center for Public Integrity, released Thursday, finds that five sitting members of Congress, including House Majority Leader Tom DeLay and Senate Minority Leader Harry Reid, have broken the lobbyist rule in recent years. These revelations come on the heels of a string of scandals involving House members who broke congressional rules and accepted all-expenses-paid trips to vacation spots in Scotland and Miami from lobbyists and lobbying firms. "Members just don't seem to understand that the rules apply to them and they have to follow them," said Melanie Sloan, the executive director of the Citizens for Responsibility and Ethics in Washington.

At the root of the problem, say ethics watchdogs, is the lack of independent monitoring of congressional ethics. Senators and House members regulate themselves through ethics committees, which are often hamstrung by backroom deals and partisan squabbling. With few exceptions, the House and Senate ethics committees have been largely dormant for the past decade. And there are clear penalties for those politicians who choose to scold their peers. After the House Committee on Standards of Official Conduct "admonished" DeLay last year for a string of ethical lapses, the Republican leadership replaced the committee's chairman and rewrote the rules to limit future investigations. "The enforcement has been so lax over the years that many members are not taking it seriously," said Larry Noble, a former Federal Election Commission attorney who runs the Center for Responsive Politics. "The ethics committees are just not considered aggressive watchdogs."

At the same time, the ethics rules often focus on narrow technical issues, while excusing the broader, more corrupting conflicts of interests, Noble says. DeLay's legal fund, for example, has legally accepted hundreds of thousands of dollars from corporations whose legislative agenda the majority leader supports. "I call it the fig leaf rule," Noble said. "The lobbyist can't contribute to the fund, but the corporation can."

Late last year, Houston lawyer Brent Perry, who manages DeLay's legal defense fund, returned two checks after the liberal watchdog group Public Citizen flagged them as unethical. Perry declined to return checks from the personal bank accounts of two other lobbyists, Robert C. Odle Jr., and Jeff Fedorchak. The checks had been signed by the lobbyists' wives, though the money came from a joint bank account. "I don't think that they made a good-faith effort to live up to the spirit of the law, and it is highly questionable if they lived up to the letter of the law," said Conor Kenny, a coauthor of the Public Citizen report.

The new Center for Public Integrity report reveals two additional lobbyist contributions to DeLay's fund -- $1,000 from former Rep. David O. Martin of New York and $500 from John H. Forehand III, who represents several Texas clients, including Dos Republicas Resources, a mining company. Fund manager Perry, who was vacationing this week, said he would check out the donations when he returns to his office. "We have tried to police this the right way," he said. "We have not gone out seeking lobbyist contributions." When reached by phone on Tuesday, Martin, a lobbyist for the military contractor United Defense and AT&T, declined to comment on the matter. "I'm headed out of town," he said.

Minority Leader Reid violated the rules in 1999 by accepting a $3,000 check from Ben Barnes, a former lieutenant governor of Texas, who now represents insurance and natural gas pipeline companies. The check arrived while Reid was engaged in an electoral recount battle. "He and Senator Reid have been friends for over 30 years," Reid spokeswoman Tessa Hafen said of Barnes. "Neither Senator Reid, nor anyone on staff, were aware that he had registered as a lobbyist." She said Reid had notified the ethics committee of the problem and was prepared to return the money if necessary.

Two other senior Republican members of Congress, Sen. Orrin Hatch of Utah and Rep. Henry Hyde of Illinois, also appear to have violated ethics rules. In 1997, Hyde took $1,000 from Jeremiah Marsh, a former Illinois-based lobbyist. Hatch accepted $3,000 in 1996 from Tom Landin, a former in-house lobbyist for Saint-Gobain, a multinational plastics manufacturer. The House has a six-year statute of limitations for ethics violations, excusing Hyde of any wrongdoing, but the Senate does not. Neither Hyde nor Hatch returned calls for comment.

In recent years McDermott, the House member from Washington state, has raised more than $400,000 to help fight a civil lawsuit that was filed against him by Rep. John Boehner, R-Ohio. The lawsuit claims that McDermott illegally leaked to the press a recording of a 1996 cellphone conversation between Boehner and then-House Speaker Newt Gingrich. In the phone call, Gingrich discussed a plan to rebut ethics charges against him, despite his agreement to not orchestrate a response to the charges. "That all happened while I was there," Schroeder said, explaining why she wrote her check. "That was a pretty awful, brutal thing."

In addition to Schroeder, three other lobbyists have given between $500 and $1,000 to McDermott's legal defense fund. They are David Springer, a former congressional staffer who lobbies at Venable; Emanuel (Manny) Rouvelas, who runs the lobby practice at Preston Gates Ellis & Rouvelas Meeds; and former Rep. Ronnie Flippo of Alabama, who lobbies at his own firm, Flippo and Associates.

Salon asked McDermott's office about the unethical contributions on Monday. By Wednesday, a spokesman for McDermott said the House member had returned three of the four contributions, including the one from Schroeder. They were still searching for a copy of the check written by Flippo. "It's good to have you guys note it instead of the ethics committee," said Bill Perry, the lawyer who manages McDermott's campaign accounts.

However, the chances that the committee would discover such a violation are nearly zero. In both the House and the Senate, the committees tend to limit their investigations to complaints from other members of Congress. In recent months, despite months of front-page stories about congressional ethics violations, no member of the House or Senate has filed a complaint calling for a broader investigation. Watchdogs expect the issue to fade from public view. "Nobody has anything to worry about," says Sloan, from Citizens for Responsibility and Ethics in Washington, "because ethics committees don't do anything."