Wong Kar Wai's mesmerizingly beautiful "sequel" to "In the Mood for Love" may not really make sense, but it's so intoxicatingly overripe that you don't care. 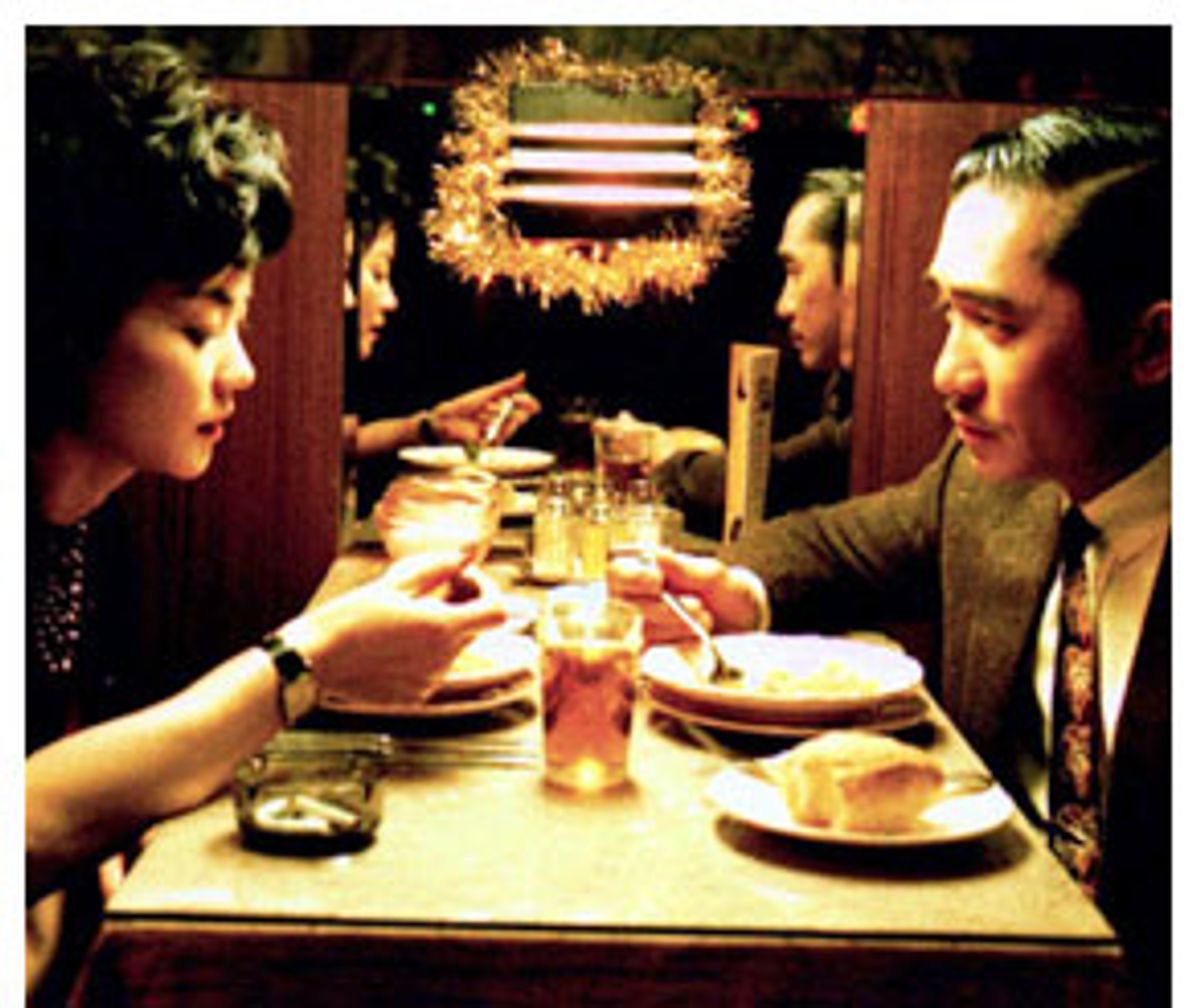 A rakish writer who has lost his true love and hardened his heart against romance. A succession of stunning, slender young women with fabulous '60s clothes and hairstyles (played by the most beautiful actresses in Chinese film), ready to storm his fortress. A shabby-genteel Hong Kong residential hotel, seen on a series of Christmas Eves, which its denizens face with lonely bravado. An erotic, futuristic romance into which the writer pours all the passion, tenderness and regret he won't or can't share with the women in his life. A visual aesthetic so rapturous and fluid, so in love with its colors and textures, its exhalations of smoke and drops of sweat, that you want to drop into every frame and live there.

These are the ingredients of Wong Kar Wai's new film "2046," among the most beautiful and most mysterious movies I've ever seen. Wong emerged on the international film scene in the early '90s, around the time some of us suspected that the high-art Euro-style tradition of auteur cinema was winding down. Blending the disparate traditions of Asian and Western film in such joyful explosions as "Chungking Express" -- and such willfully obscure melanges as "Fallen Angels" or "Happy Together" -- Wong, 47, has become the most celebrated art-house filmmaker of his generation.

I found the decadent loveliness of "2046" irresistible, but the morning after I felt a little rueful, as if I'd gone to a party and Wong had given me some really good drugs. Others will no doubt experience the film as a murky and pretentious mess -- and I'm not sure they're wrong. It's a sequel of sorts to Wong's international hit "In the Mood for Love," which meticulously captured the chaste love affair between two married neighbors (Tony Leung and Maggie Cheung) in 1962 Hong Kong who figure out that their respective spouses are sleeping with each other. But that doesn't actually get you far in understanding "2046" -- although viewers who haven't seen "In the Mood for Love" may be even more confused than the rest of us.

As luscious and absorbing as "2046" is, I sometimes had the feeling that Wong had made it by allowing the theme and atmosphere of "In the Mood for Love" to hang on the vine too long, until they decayed and rotted, started to turn funny colors and give off intoxicating fumes. Chow Mo-wan, the journalist played by Leung, certainly looks that way. While Leung is as devilishly handsome as ever, Chow now has the pencil-thin Clark Gable mustache and slightly greasy feel of a man devoted to dissipation, to long nights of gambling and drinking.

"2046" is a highly original, almost visionary work, whatever its flaws, and should be judged on its own merits. But the quest to recapture a lost love is about as archetypal as stories can get, and Wong has imbibed and synthesized a host of influences. Chow's damaged, cynical hero is partly what Humphrey Bogart's Rick from "Casablanca" might have become after Ingrid Bergman's Elsa left and never came back. He's partly Jimmy Stewart in "Vertigo," searching for a vanished girl everywhere and finding her in the wrong places. In this movie's alternate science-fiction universe, he's partly -- well, a lot -- the lovelorn astronaut of Andrei Tarkovsky's "Solaris," finding emotional succor 2,000 light-years from home.

Some years after his farewell to Su Li-zhen (Cheung) at the end of "In the Mood for Love," Chow finds himself trapped in the neo-noir surroundings of a downscale Hong Kong hotel, where he churns out trash for the tabloids and romances a series of femmes fatales with unsatisfying results. Cheung herself makes a brief appearance (it would be cheating to say more), but the most important woman in this film is a lithe, feline hooker named Bai Ling (played by Ziyi Zhang but yes, Bai Ling is the name of a major Chinese movie star, who doesn't appear in this film. Where Wong is going with that I have no idea). She lives in the next room -- in Room 2046, as it happens and theirs is a stormy, steamy affair. We can tell right away that Bai Ling, who sees herself as the hard-as-nails heartbreaker type, has fallen hard for Chow.

This potentially explosive story of two "drinking buddies" (as Chow insists they are) in danger of tumbling head-over-heels in love would be enough for most films. But Bai Ling is only one of the girls, and one of the plot elements, in "2046," and whether that's a strength or a weakness I'm not entirely sure. Chow's other flings include a mysterious Cambodian gambler known as the Black Spider (played by another Chinese superstar actress, Gong Li) whom he meets in Singapore, and whose real name turns out to be Su Li-zhen, although she's not the same woman as Cheung's character. (As far as the puzzling symbolism in this movie goes, that's just the tip of the iceberg.)

Then there's Wang Jin-weng (Faye Wong), the gawky, androgynous daughter of Chow's landlord. She's the one Chow flips for, although (or because) she's the most conspicuously unavailable; he's helping her pass letters to and from her Japanese boyfriend, to evade her disapproving father. While Chow seems cold and heartless with firecracker Bai Ling, who loves him, he's as paralyzed as a smitten schoolboy with Wang Jin-weng, who barely notices him. You may want to reach into the film and pop some sense into him, but I suppose we're meant to think that after the first Su Li-zhen he's become trapped in a fateful circle of doomed love.

Chow narrates his adventures with the women (a total of six) who drift through "2046" with considerable tenderness and a measure of self-knowledge. But it's almost as if he has no influence over the actions of the shy, cruel and wounded lady-killer he has become since "In the Mood for Love." "Love is always a matter of timing," he tells us -- and we can all identify, I suspect, with the idea of meeting the right person at the wrong time. But Chow and his creator absorb this fatalistic principle as if it were a Buddhist koan, following it from drink to drink and girl to girl into a condition of permanent aesthetic and spiritual paralysis.

Any attempt to summarize this film falls into the traps set by Wong's peculiar narrative technique. He's never been much interested in conventional plot, and "2046" hopscotches backward and forward in time, looping in circles and ellipses between real events and puzzling fragments of Chow's allegorical science-fiction novel. It's pretty much all lovelorn mood and louche atmosphere, and even for Wong's hardcore fans 129 minutes may be a lot of mood and atmosphere.

Does it help to explain that Chow's story (entitled, of course, "2046") is about a Japanese adventurer (pop icon Takuya Kimura) taking a long train ride to (or from) a mysterious future where the past can be recaptured? And that along the way he becomes erotically and/or romantically entangled with a series of beautiful androids who strongly resemble the parade of hotties in Chow's life? Does it help to mention that the year 2046 is when China's promise to maintain Hong Kong's separate political and economic system will expire, or that it was the number of a hotel room from "In the Mood for Love" where Chow stayed?

Not much, I suspect. Those elements are shards in the fractured glass of "2046," but the amount of light they shed on the whole is debatable. What will make the movie irresistible, to those viewers with the patience for it -- or masochistic endurance, if you prefer -- is its prodigious visual sensuality and its emotional commitment. You may feel lost or bewildered at times in "2046" (and I certainly did), and you may feel that Chow is suffering from self-inflicted wounds. But every new adventure with every new girl vibrates with possibility, and the filmmaking is so stunning that you may not care that this is less a movie with a plot and characters than a hermetically sealed universe of romantic regret.