In Carla Speed McNeil's "Finder" comics, cultures past, present and future clash and combine to create a fantastic vision of a different world. 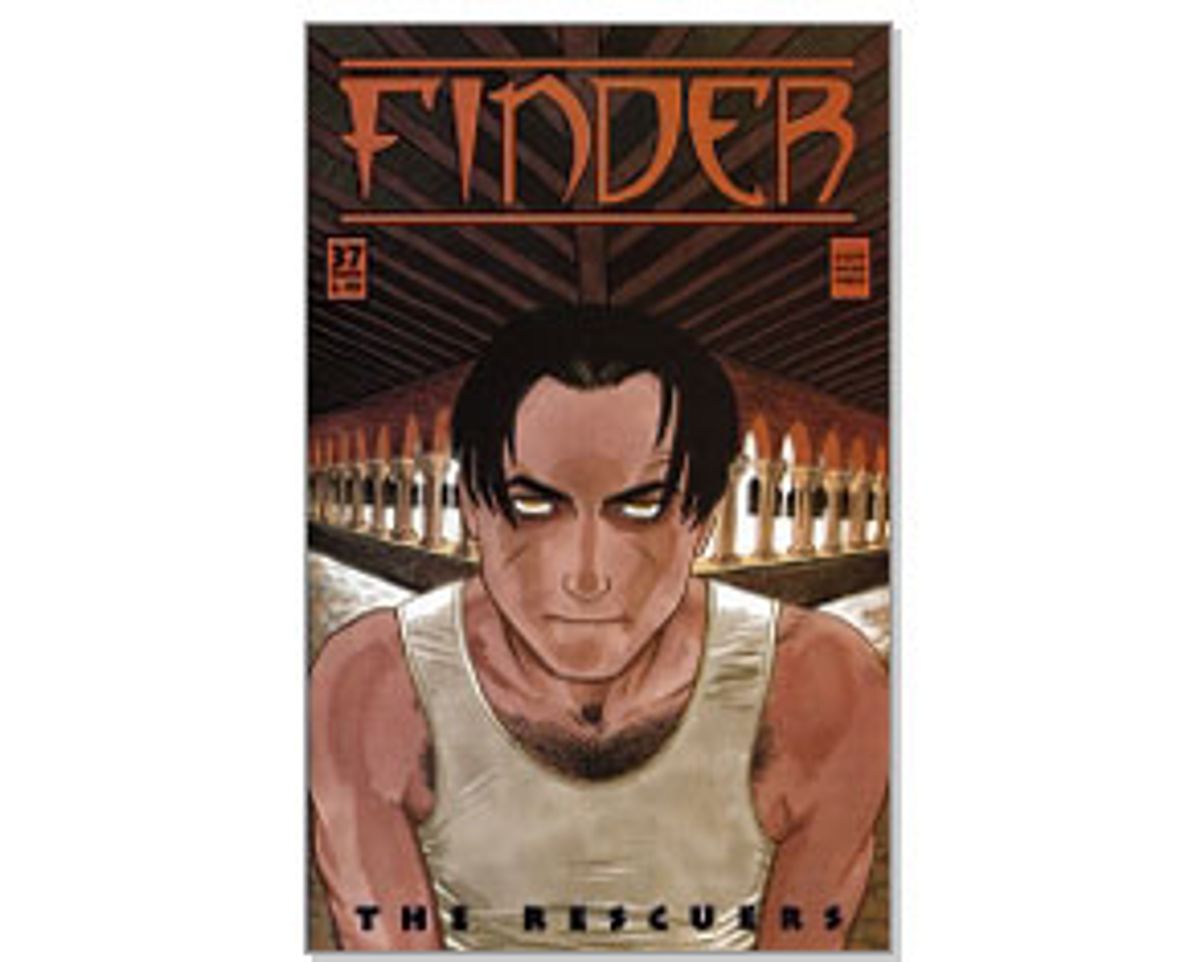 A panel from "Finder."

Carla Speed McNeil describes her comic book series "Finder" as "aboriginal SF," although "anthropological SF" is probably closer. More than anything else, it's about cultures both pre-technological and post-cybernetic, with all their totems and taboos, and the sparks that fly when they come into contact with each other. The science fiction part is what allows her to bring in any ideas she likes from history, technology and pop culture, real or imaginary, from yurts to robot secretaries to talking dinosaurs.

Since 1996, McNeil has been writing, drawing and publishing "Finder" and its graphic-novel collections (seven to date) through her company Lightspeed Press. "Finder" doesn't follow a particular protagonist, although one character makes at least a walk-on appearance in every book, and takes center stage in four of them: Jaeger, a half-breed transient who's a "finder" -- a member of a secret society of tracker-scouts -- and also a "sin-eater," a ritual scapegoat for members of his tribe, who believe that he doesn't have a soul. Jaeger can recover quickly from almost any injury, but grows sick and weak unless he gets hurt regularly. As an outsider everywhere he goes, he's always some kind of cultural go-between. (The other character McNeil keeps returning to is Vary Krishna, a young dancer attending an exclusive academy for aspiring temple prostitutes. The shorter stories about her are collected in a volume called "Mystery Date.")

The real star of "Finder," though, is the nameless world McNeil has invented as its setting: a crazy-quilt of ideas from high-tech science fiction, fantasy and Sir James Frazer's "The Golden Bough." She has worked out her world's socioeconomic systems and subcultural quirks so comprehensively that she can take them for granted as background information for her stories -- the sort of tossed-off concepts that gave the original "Star Wars" and "Dune" their depth. Some of "Finder's" less obvious details get explained in the collected volumes' end notes. In the new volume, for instance, we see a posh neighborhood infested by a kind of kudzu that grows jabbering video screens everywhere, and McNeil's annotation describes how it evolved from a "self-regulating streetlight," but you don't need to know that to boggle at its presence.

The "Finder" world's population is concentrated in multilayered, domed cities, full of elaborate but messy technology. Most of the cities' residents belong to clans, each of which has customs of its own, and a certain level of genetic uniformity -- members of some clans look almost exactly alike. Wealthier urbanites have data-port jacks surgically implanted in their heads for transferring information. (Many also know how to read, but it's considered an old-fashioned skill.) Nomadic tribes, known as "Ascians" (as generic a term as "Native American"), generally live outside the cities but sometimes set up camp inside them; Jaeger identifies as an Ascian. There are some genetically engineered people with animal heads and features, too, and humans also interact with the world's semi-humanoid species (such as the lion-like Nyima, whose females are bipeds and whose males, except for their king, are quadrupeds) and with intelligent but totally non-humanoid creatures. Oh, and there's some magic around, but it's generally pretty low-level, more useful for temporary possession by spirits or divination than for doing much of substance.

That's a lot to swallow at once, and there's a lot more. The advantage of "Finder's" high-concept overload is that McNeil never runs out of remarkable stuff to draw -- she always gives the sense that she knows exactly what her settings look like, and she's got so delicate a touch for faces and their expressions that she can draw dozens of characters who look almost identical but are still distinct. The disadvantage is that the constant stage setting can impede the plot's flow. The first couple of volumes, in particular, are so overwhelmed with clever ideas that they're sometimes hard to follow. (Fortunately, the books are self-contained, and don't have to be read in order.) McNeil didn't entirely hit her stride until the fourth "Finder" volume, "Talisman," and it's not a coincidence that it's her most tightly focused story: It's about a girl who falls in love with a book, loses it, and becomes a writer in her attempt to find it again.

Well, imagine that -- a storyteller inspired by other people's stories. McNeil isn't shy about borrowing ideas, passages and images she's fond of, and she's careful to identify her sources in her annotations (if not, usually, on the comics page itself). Within the first few pages of "Talisman" alone, she quotes Michael Ende's "The Neverending Story," Oscar Wilde's "The Selfish Giant," Stephen King's "Rose Madder," Octavia Butler's "Parable of the Sower," and "The Night of the Hunter." She followed "Talisman" with its much longer conceptual flip side "Dream Sequence," which addresses the dark side of imagination and creation; it's about a man whose brain is a popular virtual reality environment, and who discovers that a monster from his subconscious is attacking his visitors.

McNeil mostly drew "Dream Sequence" in a swirling, elaborately crosshatched style, to mimic its chaotic stream-of-consciousness narrative. The seventh and most recent "Finder" collection, "The Rescuers," is thematically concerned with inflexible boundaries, and its layouts are brutally geometrical. Even so, every few pages McNeil pulls off some kind of visual tour de force: a ritual in which Ascian girls, drawn with flowing chiaroscuro, try to call on a benevolent spirit to possess them; a dark forest scene whose setting is nearly obliterated by charcoal smudges; and especially the story's conclusion, where the narrative literally implodes with a sequence in which panels following most of the plot threads get tinier and tinier until they're crushed into illegibility. (You can work out what's actually happened, but it's McNeil's way of drawing attention to the parts of her story that are more important.)

Constructed around a set of events loosely inspired by the kidnapping of Charles Lindbergh's baby, "The Rescuers" is named in tribute to the Margery Sharp book, or maybe the Disney movie, or both. It's a mystery story in which culture clash negates the possibility of the crime ever being solved; an upstairs-downstairs story in which the upper and lower classes in the same household have such different mind-sets that they can barely understand each other; a story about stolen children in which nobody gets rescued.

The setup is that the year-old son of a baron of one of the city of Anvard's lower-ranking clans has been kidnapped. As it turns out, kidnapping rich people is so common in Anvard that it's considered borderline legal, if troublesome, and the baron's wife sends out a televised message to the kidnapper, trying to micromanage the baby's care: "He must not be fed chicken, turkey, quetzal, or other bipeds, or risk developing allergies ... if he cries without his stuffed squid, I'm sure we can work something out." Jaeger, though, discovers that the situation is worse than it seems, and that even though he knows who the kidnapper is, local law leaves him powerless to do anything about it. Meanwhile, the baron's estate is being managed by a crew of nomadic Ascians, one of whom, a young woman named Lohena, has just given birth to twins -- a serious taboo in her tribe -- and is trying to figure out how to keep one of them from being put to death before her period of seclusion in the birth yurt ends.

The pieces are in place for something like a happy ending, but things don't really work that way in McNeil's cosmology. Instead, the grinding inability of the story's two central cultures to communicate means that things work out disastrously for everyone. "What kind of people are these??" one Ascian woman snaps about the nouveau riche clan she's serving. "That woman in there, she tried to feed the children animal milk!" The baron and his guests, meanwhile, can't stop condescending to the impoverished, half-starved Ascians: "Oh! How do these native girls stay so slim?" (In an earlier volume, "King of the Cats," a group of Ascians are offered sanctuary in Munkytown, a domed city that's a giant amusement park, as long as they agree to pitch their tents and perform in "Noble Savage Land.") And the ideological core of "The Rescuers" is an ongoing argument between Jaeger and a kitchen maid named Lydia about whether you can "pick and choose parts of a culture to tack on to your life."

Why is that important? Because one major function of culture is determining who can be exiled or killed when resources can't support everyone. The idea of the painful division between the drowned and the saved recurs throughout "The Rescuers"; at the beginning of the story, a teenage Ascian boy has just shot a couple of male lizard-bird creatures that invade game birds' nests, and an older woman tells him that he's wasted his bullets: "If there are too many of anything, it's the girls you have to kill." The drowned ones aren't the same all over, though; there's no deeper chasm between cultures than their ideas of who deserves to be spared, and whose only hope is to be rescued from a wicker basket by someone from another tribe. McNeil's take on that conflict is framed as a science-fiction detective story, but its tone is as primal as folklore.

Douglas Wolk's writing on comics and graphic novels appears the first Friday of each month in Salon Books.