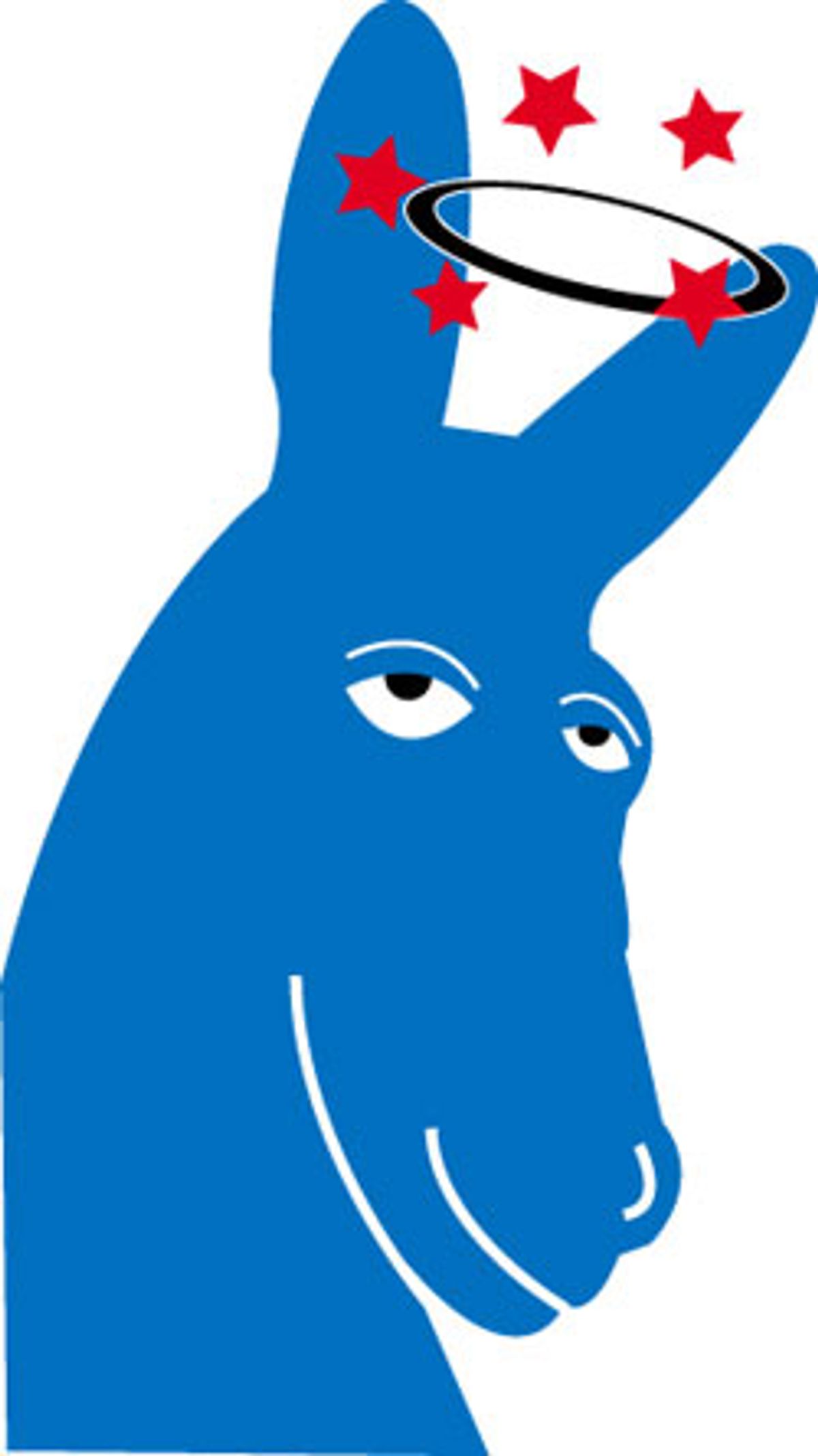 What I wanted to respond was that the floor of the U.S. Senate is not the place to invoke Jesus Christ. Most of us, whether we are people of faith or not, would vastly prefer that public policy be developed democratically, taking into account people's views (including religious views, but not exclusively) about what they need to lead healthy and productive lives in relative freedom and peace. But I said nothing as I sent a private prayer of thanks to Jesus that no rabbis, imams, lamas or other non-Christian clergy were in the room. I vowed to send some money to the ACLU and People for the American Way, which seem to have the right strategies to deal with the rising tide of religious conservatism that has gripped the United States since the 1980s.

It was in 1981 that an outraged Norman Lear and others founded PFAW as a vehicle to combat the flag-waving bigotry of Jerry Falwell's Moral Majority. To counter it, they went to the core of American democratic values: the values of the Enlightenment, the idea of an America founded on a true secularism -- one that understands that the government derives its powers from the consent of the people, not from the favored religion of the president. Religious leaders who shared that view of democracy joined with other opinion leaders in attempts to uphold those Enlightenment values, and we all proved that the Moral Majority was neither moral nor a majority.

Yes, there has been some ebb and flow in the tide of religious conservatism, with premature predictions of the death of the right followed by overblown assertions about its growing power. The Moral Majority fizzled out, to be replaced by the Christian Coalition, which fused with the Republican Party -- and that party won America in 2004.

With the 2004 elevation of "religious values" voters, secular progressives and the Democratic Party decided they needed to get religion. Some deals have been cut, advice has been given, and coalitions are vying for a place at the table. Progressive religious groups claim to have registered 500,000 voters and put President Bush on the defensive with a piece of research that claimed abortion rates went down under President Clinton and up in the first two years of the Bush administration.

In the honeymoon period these groups are currently enjoying, few are examining closely what values are likely to enter the political discourse as a result of a left-wing God mediated or channeled by groups such as Sojourners and individuals like Jim Wallis (Sojourners' executive director), who has become the most (self-)promoted voice for the religious left. I have no doubt that the senator who invoked Jesus had been tutored by Wallis. Her mantra was the most frequently used sound bite from Wallis' textbook, "God's Politics: Why the Right Gets It Wrong and the Left Doesn't Get It" -- "I find 3,000 verses in the Bible on the poor, so fighting poverty is a moral value."

(In the interest of full disclosure, I have participated in an off-the-record dialogue with Wallis, Glenn Stassen and a few other progressive religious leaders to explore our perspectives on abortion. Nothing in this article comes from that dialogue, whose terms require that we not quote or characterize what participants say in the sessions.)

To a considerable extent, Wallis catapulted to success because no one else was available. And he was the new "man bites dog" story, an evangelical who claimed to be progressive. The rest of the progressive religious movement is amorphous and has not yet articulated an agenda or a set of values that can be generally agreed upon by those who enter the sanctuary. The main coalition vehicle is the Center for American Progress' Faith and Progressive Policy initiative, whose structure and policy positions are still evolving. A second vehicle is the Freedom and Faith Forum organized under the auspices of Texas-based Drive Democracy, which focuses on grass-roots outreach to people of faith through an imaginative and inclusive bus tour. Everyone is welcome on this bus, including the gay, lesbian, bisexual and transgender community and reproductive-rights supporters, although, again, the group's agenda is not yet carved in stone.

But Wallis is king, a constant presence at Center for American Progress events, brought by the organization to Democratic Party strategy meetings and trotted out to address the growing number of high-dollar donors looking for an answer to Democratic Party failures.

What does Wallis stand for? And how will women and democracy fare if his vision prevails in the party or progressive politics? His message prior to the 2004 election was based on a strategy long discarded by People for the American Way: Ignore hot-button issues like abortion and gay rights and concentrate attention on the Iraq war and poverty, and when all else fails, invoke tolerance.

It is on reproductive health issues and pay rights that Wallis' views are most troubling. He is one of those religious leaders who set the teeth of feminist religious women, particularly Roman Catholics, on edge. He identifies himself as a progressive pro-life evangelical, but his heroes are ... the Catholic bishops. His speeches are full of references to Cardinal Joseph Bernardin and the so-called consistent ethic of life. He claims to speak for "millions" of progressive Catholics who are eager to support the Democratic Party but balk at its stance on abortion. His pronouncements on Catholic teaching about abortion and what Catholics actually believe are firm and unshaken by facts. I know Wallis, and he is no theologian, but I would not be the least bit surprised if at some point Wallis followed conservative leader Richard John Neuhaus and became a Catholic.

The positions taken by Wallis on abortion, which remain unchallenged publicly by anybody in the Faith and Progressive Policy initiative, are likely to damage women's reproductive health and rights. (The Center for American Progress, however, fully supports abortion rights.) Wallis' views are hard to pin down. Attempts by interviewers to get Wallis to go beyond his well-rehearsed and often-repeated sound bites on the issue are met with politician-like repetitions of homespun theology. He thinks abortion itself is morally wrong but does not want to see it criminalized. His reason for such generosity is classically patriarchal beneficence: He doesn't want poor women who are victims of poverty and injustice to suffer. There is no acknowledgment that a woman who is not a victim, but a thoughtful moral agent who could continue a pregnancy, might make a good decision to have an abortion.

In his attempts to seek "common ground" with others, Wallis focuses on the "too many abortions" argument. But his common ground is very shaky. It does not, for example, include contraception. Wallis has said he is in favor of contraception, but after a fairly extensive review of his writing and transcripts of speeches and sermons, I can find no reference to contraception as a common-ground means of reducing abortion rates. Wallis' common ground is abstinence-focused sex education, adoption reform (with no specifics on what kind of reform he thinks would lead to a significant number of women choosing to give birth and then give up their babies for adoption), and better economic benefits and social support for pregnant women to encourage them to continue their pregnancies.

A lengthy Op-Ed published in the New York Times on Aug. 4 was the first indication of where Wallis would go in terms of abortion law. While he repeatedly has said that Democrats need not change their position on abortion, just the way they talk about it (comments echoed by party chairman Howard Dean), Wallis is now out of the closet. He supports "reasonable restrictions" on legal abortion. Which ones, and how many, are unclear. Does he support a cutoff of federal Medicaid funds for poor women's abortions? Second-trimester abortions only when the pregnancies are likely to result in severe and long-lasting health consequences for the women or in dead children? Mandated scripts that lie about fetal development and the health consequences of abortion? Restrictions on access for adolescents unless their parents give consent? Waiting periods that make it hard for working women to get to clinics the several times required to prove they have "thought through" their decisions? Every restriction currently on the books adversely affects the poor women he claims to care about so much.

And here is where the challenge to the progressive religious agenda and its other leaders arises. Will any of them have the guts to take on Wallis in public? Will any ask if he is genuinely interested in presenting evidence-based policy solutions that really can reduce the need for abortions, or if he is using abortion as another way to push an antipoverty agenda? Are pregnant women a means to achieving Wallis' agenda? There is no evidence that the positive measures he does suggest -- better economic support, jobs, childcare and parental-leave benefits -- would lead to a significant decline in abortion. There is, however, substantial evidence that access to contraception (both regular and emergency) would significantly reduce unintended pregnancy and thus abortion.

This overwhelming and admirable commitment to ending poverty and promoting policies that would do that has caught not only Wallis but another newly important figure in progressive evangelical circles, Glenn Stassen. Stassen, who describes himself as pro-life but is publicly in favor of legal abortion, is the author of the study that claimed that abortions decreased under Clinton and increased under Bush, and hypothesized that the reason was Bush's cuts in the antipoverty budgets. More recent research by the Alan Guttmacher Institute has proved that Stassen was wrong on the facts. Abortions went down under Clinton but have continued to go down under Bush (although at a much slower rate). Most important, the data shows that Stassen's conclusion -- that the abortion rate went down under Clinton because of better support for poor pregnant women -- is demonstrably wrong. Analysis by the AGI of government data shows that the reasons for the decline during Clinton's presidency were an increased use of emergency contraception and a better use of traditional contraceptives such as the pill. When I asked Stassen why he continues to make his claims, despite the facts showing otherwise, instead of supporting contraception as a way to reduce abortion, he passionately responded, "Because I want to make an antipoverty argument."

Stassen's case provides a classic argument against the involvement of religious leaders in electoral campaigns. Stassen is a good man -- sincere, honest and genuinely committed to women -- but he shows how hard it is to be a prophetic and truly independent voice when you strongly support one candidate in an election. Perhaps I am naive, but I expect more of my religious leaders than I do of James Carville or Robert Shrum.

To the extent that the progressive faith community sees itself as another vehicle for the revitalization of the Democratic Party -- and a vote getter -- and party operatives also see that community as part of the electoral process, religion is in real trouble and democracy not far beyond.