Home runs are down this year, but that doesn't necessarily mean players are off the juice. Steroids still cast a grim shadow over baseball, and all of us -- players, owners, the union and fans -- are to blame. 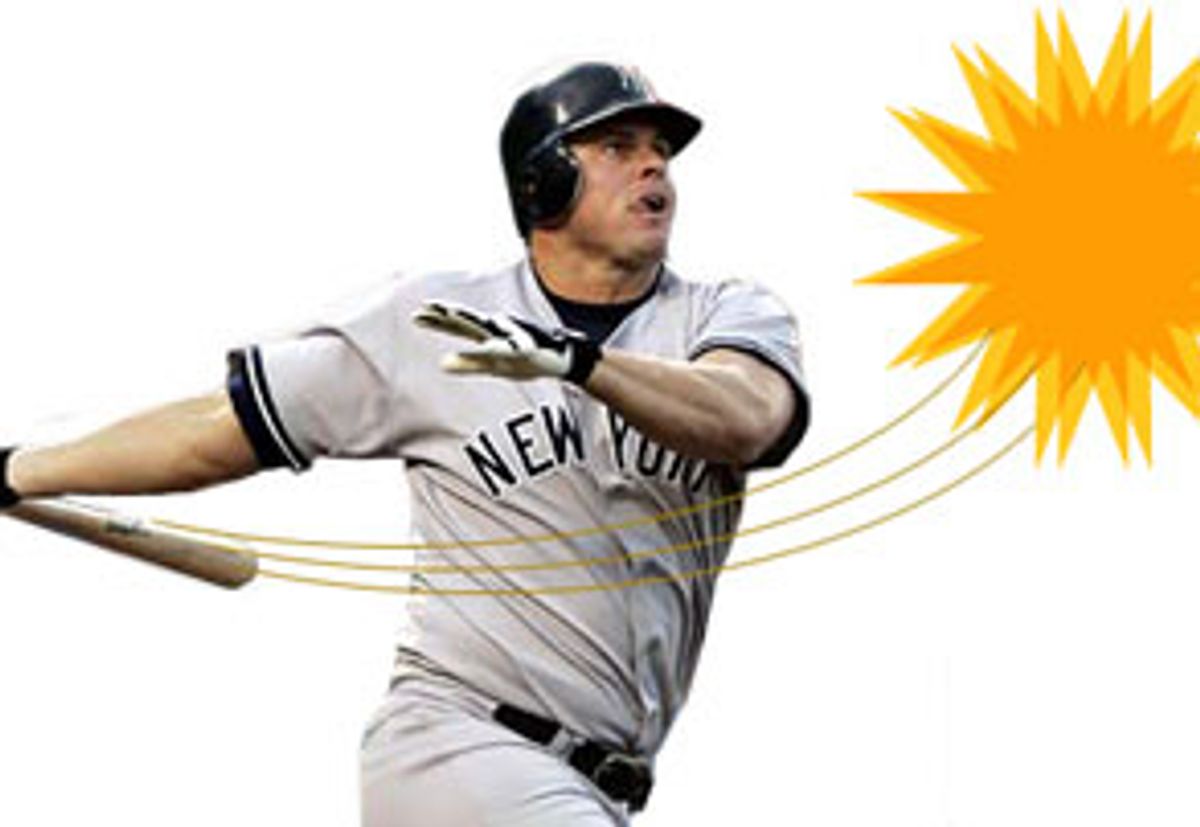 A month ago at Yankee Stadium, I sat in front of a yahoo who opined to everyone within earshot that Jason Giambi -- who would homer that day and go on to hit 14 homers in July, garnering American League Player of the Month honors -- was back on steroids. "Guy couldn't hit, and they wanted to send him down," declared the yahoo. "He figures he's going to either get cut or get caught and he'd rather go out in a blaze of glory, so he starts juicing again." The comment was easy to dismiss, a conspiracy theorist ranting about grassy knolls and lone gunmen.

In the wake of the Rafael Palmeiro steroid revelations, the accusation doesn't sound so farfetched now. Since the Palmeiro disclosure, and the announcement one day later that Mariners pitcher Ryan Franklin tested positive for a banned substance, rumors about the next domino to fall, the next star in line for a suspension, have rapidly spread.

On Aug. 10, Boston Herald columnist Howard Bryant, author of a compelling new book, "Juicing the Game," which details baseball's 1994-2004 steroids epoch, reported a conversation with a TV executive who told him that Major League Baseball was sitting on as many as a dozen more positive tests; Bryant also held a conversation with a player, who put the number as high as 58, with names even bigger than Palmeiro. By day's end, MLB and the Players' Association took the unusual step of responding with a joint statement: "Reports of large numbers of positive tests currently unreported are totally false. Reports of big-name players having the reporting of their test results delayed are totally false."

It's a no-win situation for baseball fans. As one who follows the Yankees, I find a real conflict in rooting for Giambi. Earlier this month, ESPN's Buster Olney wrote that Giambi's streak may be fueled by human growth hormone, a naturally occurring substance undetectable in a urine test, and as such outside the scope of MLB's current policy. In his leaked BALCO testimony, Giambi admitted he had used HGH in the past. But even putting that aside, taking pleasure in the slugger's resurgence is tough when I can't dismiss the possibility it's chemically fueled. As his role in the Yankees offense becomes more prominent, rooting for the entire team becomes that much less fun. Giambi is not the only one in purgatory for his transgressions; so are all of us who love the game.

Steroids hover over baseball like a dark cloud. Uncovering the extent of their impact on the game, though, remains as elusive. And that's the real problem. Suddenly, every player is under suspicion, no accomplishment escapes cynical speculation, and the presumption of innocence is out the window.

Let's look at the statistics. This year, the pinnacle of the so-called juiced era, home runs -- Giambi's and others -- continue to fly out of the ballparks. The 1994-2004 era produced nine of the top 10 seasons for home run rates, with 2000 topping the list at 2.34 per game. Last year was the fourth most prolific season for homers, with an average of 2.25. This year's rate of 2.08 would rank 10th, a decrease of 7.4 percent, but it's still higher than 1994, 1995, and 1997, years that saw several sluggers set up base camps for assaults on baseball's Mount Everest, Roger Maris' single-season homer record of 61.

But the decrease in home runs this year, when the penalties for using steroids have been stepped up, doesn't necessarily prove players are off the juice. To believe that, you first have to assume that juiced players produced the last decade's burst of home runs. It's not that simple. The barrage was fueled by a variety of factors, as baseball underwent a decade of accelerated change.

Expansion literally took the game to new heights, adding the two highest-altitude ballparks to the majors in the form of Denver's aptly named Mile High Stadium (soon replaced by the slightly lower Coors Field) and Phoenix's Bank One Ballpark (1,100 feet). Those parks were part of a building boom that has seen 17 new venues open since 1993, when homers began to rise. The new parks contain less foul territory and more favorable hitting environments, though not necessarily smaller outfield dimensions; fences moved out by an average of a foot and a half down the foul lines from 1994 to 2004, though the centerfield walls are about a foot closer than before.

During that time, dense, durable maple bats came into vogue, allowing for thinner barrels and hence lighter and faster-swinging war clubs while maintaining the size of the bat's sweet spot. From within the game came a flood of anecdotal evidence that the ball itself was juiced in some way -- lowered seams, a slicker surface, harder components, tighter winding, and the addition of the blue MLB logo, which as it rotates allows hitters to track the ball's break with greater ease. Those allegations were accompanied by sleuthlike reports of undocumented changes in the ball-manufacturing process, which were routinely accompanied by blanket denials from automaton-like Rawlings spokesmen. (I examined these factors at length in a chapter I contributed to "The Juice: The Real Story of Baseball's Drug Problems," by Will Carroll, published earlier this year.)

A new pharmacopeia entered the game during that stretch, muddying the waters even more. Aided by the legal supplement creatine, 32-year-old leadoff hitter Brady Anderson, never a major power hitter in his career, walloped 50 home runs in 1996, shattering his previous high of 21 to produce a fluke season for the ages. Two years later, Mark McGwire's run at Maris was accompanied by his admission that he was using androstenedione, a steroid precursor outlawed by many other sports, including professional football and the Olympics. Then, as Barry Bonds was breaking McGwire's short-lived record, came post-retirement confessions from two MVPs, Ken Caminiti and Jose Canseco, that their heydays were steroid-fueled. Caminiti estimated at least half of all players were on steroids, while Canseco estimated a whopping 85 percent and promised to write a book on the topic. Three years later, we've got "Juiced," BALCO, and congressional grandstanding -- the whole megillah.

We've also got a greater vocabulary for understanding the spectrum of performance-enhancing drugs. It's a gray area that covers virtually unregulated dietary supplements like creatine, now-illegal steroid precursors like andro, and misused prescription drugs. Winstrol, for instance, reputedly what Palmeiro tested positive for, has veterinary applications for animals healing from surgery, and even the performance-enhancing drug Palmeiro's most identified with, Viagra, has been discussed theoretically as an athletic performance enhancer due to its ability to dilate blood vessels. Players are also using synthetic versions of naturally occurring substances like HGH and insulin, as well as illegal anabolic-androgenic compounds, the true steroids. Anabolics build muscle mass, reduce body fat, enhance quickness, speed recovery, and increase aggression -- properties all too many baseball players have been unable to resist pursuing despite side effects that doctors believe may debilitate the body's major organs down the road, suppress blood clotting, and shrink the testicles.

For the first time, we've also got a testing program from MLB that publicly identifies and punishes users of banned performance enhancers. To date, just eight major leaguers have tested positive and incurred the first-offense penalty, a meager 10-game suspension. That's down from 12 positives in 2004 (when users weren't publicly identified but placed on an administrative track) and 83 in 2003 (a year of survey testing that triggered a more comprehensive program). Depending on your level of cynicism, this suggests that the specter of testing has deterred most users, that said users have switched to HGH or one of the undetectable designer steroids that have followed in the wake of THG (the substance at the center of BALCO), or that baseball is involved in a massive coverup.

With roughly the same number of positives as last year -- a group that makes up less than 1 percent of those tested -- it's tough to point to testing and its penalties as solely responsible for the drop in home runs. A few other reasons for the decline stick out. It's easy to point to the absence of Bonds, who from 2000 to 2004 homered with a frequency more than four times the league average. Bonds has sat out the season with a knee injury, likely sending some 40-plus homers missing. More important, the return of baseball to the nation's capital via the former Montreal Expos has not only introduced RFK Stadium --the most pitcher-friendly, homer-suppressing park in the majors -- but also taken away a more favorable environment by removing Olympic Stadium and its shotgun-wedded bandbox of a bride, San Juan, Puerto Rico's Hiram Bithorn Stadium, where the Expos played 22 games apiece in 2003 and 2004. Thus far this season, the number of homers in RFK is 36 percent lower than in other major-league parks. If we exclude the home games of the Nats and Expos in our year-to-year comparisons, homers have fallen just 6.5 percent.

Because ballparks generally take a few years for their full effects to reveal themselves, due to weather patterns and other sample-size issues, a more responsible approach to comparing recent homer rates can be taken in controlling for the parks where we have less than three full seasons of data to draw upon. Philadelphia's Citizens Bank Park, Cincinnati's Great American Park, and San Diego's PetCo Park all opened in the past three years, while Kansas City's Kauffman Stadium moved the fences back considerably prior to 2004. All have shown themselves to lean toward the extremes at either end when it comes to homers. Citizens and GAP are very conducive to the long ball, while PetCo and the reconfigured Kauffman are quite suppressant. Removing those as well as the Nats and Expos, we see a 5.6 percent drop in homers per game from 2004 to 2005.

By themselves, new ballparks can't explain the decrease any more than they could explain the rise, but it's clear they've been a contributing factor in the variations. So, it's tough to credit drug testing for the drop when, using the same controls, homers increased by 1.7 percent from 2003 to 2004, despite an 86 percent decrease in the number of positive tests.

Taken together, the only clear picture is that we still can't gauge the total effect of steroids on the game. We can't tell the good guys from the bad guys, and the ambiguity is unsettling. The portrait Bryant paints in "Juicing the Game" is that we're all complicit in letting steroids flourish. That goes for the baseball commissioner (merely a tool of the owners), owners (loath to commit financial suicide by acting on suspicions that their players were using the drugs, and too belligerent in bargaining with the union to reach an agreement on testing), union (hiding its juiced-up stars behind rhetoric, while failing to heed the wishes of the marginal players, who are more receptive to testing), writers (afraid of losing access to the locker rooms and unwilling to police the game), and fans (enamored of the long ball and turning out in record numbers despite the game's transgressions). Baseball is mired in purgatory and we're all in it together.

Jay Jaffe is the creator of the Futility Infielder Web site, and an author for Baseball Prospectus.